Added Tuesday 10th December 2019
Hardie Race Promotions are delighted to announce that advertising and sponsorship opportunities are now available for the 2020 season.

Trackside advertising boards continue to be available at an excellent rate of less than £5 per race meeting!!

Website advertising has been added for the 2020 season with a prime location available on a random basis. Have your business seen by over 300 people per day with a link direct to your website or Facebook page.

Sponsorship opportunities are available for all major events - should you wish to enquire about sponsoring any of these and having your advert on our partners page of the website, please get in touch with us for further information.

Custom made sponsorship packages are available for specific formula, series or championships.

For all of the options available, your business will get great exposure throughout the season with specific focus on the run up to each event. Help your business grow and invest with Hardie Race Promotions.

Following trials with a number of formulas in 2019, the ORC are rolling out the use of race receivers to all formulas run on ORC circuits in 2020 with the exception of adult banger formulas (Junior Banger drivers will need to use them).

Race receivers enable the steward of the meeting to be in contact with all drivers at all times and has proven to assist with the safe, effective running of a meeting and races and the ORC are hoping that the introduction of these are seen as a major step forward by the Oval Racing Council.

A race receiver is an important piece of safety equipment like your helmet and overalls and it will be compulsory for drivers to have a working race receiver during a race – failure to have one will see you not being allowed to race.

The cost of these are £95 (Including VAT)

Added Thursday 21st November 2019
Following on from discussions with drivers, Hardie Race Promotions have taken the decision to hold the 2020 drivers meetings this side of Christmas to give drivers as much notice as possible for any new / changes / suggestions to rules etc.

The dates and times are as follows -

Any queries, topics you would like discussed etc, please email us.

Added Thursday 7th November 2019
Wow, it's been quite some season here at Lochgelly Raceway with many great races, talking points and on track action. It is hard to believe that we are now at the end of our season already and we intend to go out with a bang on Saturday 9th November with a the eagerly anticipated Big Van Banger Scottish Championship, PLUS a Firework display operated by Edinburgh Firework Store.

Gav Fletcher won the Van Banger Scottish Championship in 2018 and will be back out doing his utmost to win it for the second year in succession, though will have some opposition on track looking to thrwart his chances of success. A record turn out for the Van Bangers at Lochgelly Raceway is expected with over 20 vans booked in to race, with more expected on the night. A host of Team ? drivers are looking to end their seasons on a high note and will all be out to put on a show.. Lee Clarke, Josh Heeps, Derek Wilson, Graham Watt and Gary Mentiplay will all be out in the Team colours, alongside reigning Scottish Champion Gav Fletcher. The well respected Team Mob are also expected to have a good turnout of vans on track, with Jim Dillon expected to return to action for the first time in 2019 at Lochgelly. He'll be racing in the white and blue Mob colours alongside Chris Thomson, Neil Naismith, Callum Campbell and one or two others. Van Banger World Cup Champion Marcus Chant is expected to be in attendance as he looks to add the Scottish title to his list of achievements. The evening will finish off with a Demolition Derby for the Van Bangers as they drivers look to finish off their 2019 seasons in style!! There will also be various awards on offer for the drivers including an entertainer award and best presented van, alongside the inflated prize money for each of the races!

The Superstox are back in action for the second week in succession and will be looking to entertain throughout the evening. A good outing last week for the formula seen a lot of on track action with some superb battles throughout the night. This week we expect no different, with a few visiting drivers joining us on grid, including former World Champion Colin Aylward and Randal Lynn. Mark Dews will also return following a period on the sidelines. National Points Champion Bryan Forrest will be looking to finish the season on a high as he aims to continue to add to his tally of wins for the year. Scottish Champion Barry Stephen and the likes of Adam Low, Aaron Riddell and Mark Brady will be hoping to stop Bryan in his tracks though as they look to put their front bumpers to good effect throughout the evening.

The ProStocks have seen an upturn in the quality of racing throughout the second half of the season with car numbers picking up as well as the season winds down. With this being the final meeting of the 2019 season, the drivers will no doubt be out to entertain and steal the plaudits from the Van Bangers.. Tam Melrose and Ross Stewart have both recently returned to action and have been performing well since their return. Dougie Kidd has been in good form since changing to the Corsa, whilst early season pace setters David Linton and Lee Kopacz will also be in action. The 'nudge and spin' formula has the potential to be entertaining with a few scores to settle amongst drivers on the night.. Hopefully it'll all be kept within the rule book though.

The 2.0 Hot Rods have had a good season, muchly dominated by Jim Pitcaithly with Jim taking the Scottish Championship and National Points crown for the 2019 season. However, as much as the 91 car has took the honours, it's not all been plain sailing with a number of great drivers out on track, he's been made to work hard for a lot of the wins. Brian Wilson has had a good season, taking a few wins along the way and being one of the quickest cars on track at times. Brian will be looking to find the form and luck that has elluded him in the last couple of meetings. Wayne Lee joins us again as the Englishman makes the trip north to be with us on the final outing of the season. Andrew Denholm, Kevin Stewart, Derek Connor, Tam Linden and Gerry Hendry will all be looking to leave with a haul of points and their cars intact though could find the going tough as they look to overcome some of the lower grade drivers, with Ger Wilson and Cameron Willacy both showing good pace in there most recent outings.

The 2.0 Hot Rods are joined by the National Hot Rods for the final World Qualifing Round of the 2019 year. The Nationals have seen some excellent racing and the battle for the points looks to be closer than ever before, with Gordon Alexander looking to take the title, though the likes of Kenny Purdie, Ian Donaldson, John Sibbald, Ian McGuigan and Roy Anderson take the challenge to the lead two drivers.

Information
- Spectator gates open at 1pm on Saturday with the first race being 5pm.
- Drivers sign in will open at 1pm as well, all van bangers should park on the hard standing area of the pits.
- Trackside parking is available on a first come first served basis at £5 per vehicle with availability limited. This cannot be reserved. Cars should park a doors opening width apart. Vans and Campers should only park on the top two tiers. Any vehicles parked inconsideratly may be charged for a second space.
- Admission Costs; Adults £16; Concessions (Blue Badge / OAP) £10; 12-15 years £10; Under 12s go FREE.

Added Saturday 2nd November 2019
Many thanks to all that joined us tonight at Lochgelly Raceway as we run through around 22 races in the evening in what was a difficult evening to organise, but the event went as well as can be expected with a great result!

Some great racing was had from the 1300 Stock Cars, Micro Bangers and Superstox across the evening with plenty of on track action. Unfortunately time ran out and we were unable to run our planned demolition derby for the Micro Bangers.

We hope that everyone that had passenger experiences left with a great buzz and enjoyed there time on track.

The ladies 1300 race went well and raised a great amount of money for a couple of great causes. Well done ladies! Congratulations to Shaz Law on winning the event.

Many thanks to all the CC Rod and Hot Rod drivers that volunteered there time, cars and safety equipment to make tonight possible.

Thank you the the Freck family for joining us tonight as we marked the occasion.

It was great to see so many 1300 Stock Cars on track tonight in what we hope is something that can be a regular occurrence. Sean Naismith also returned to the top of the Lochgelly Track Championship standings, meaning that he has won the track championship title for 2019! Well done Sean!

Finally, thank you to all that participated, sponsored or donated in our efforts to raise a great sum of money for two great charities. A superb sum of £7235.50 was raised tonight and will be split between SAMH and Strathcarron Hospice.

Finally thank you to Pit Stop Beauty and Gilmore Engineering on sponsoring the event.

We are back next weekend with our final meeting of the 2019 season as we host the Van Banger Scottish Championship and Firework Finale! 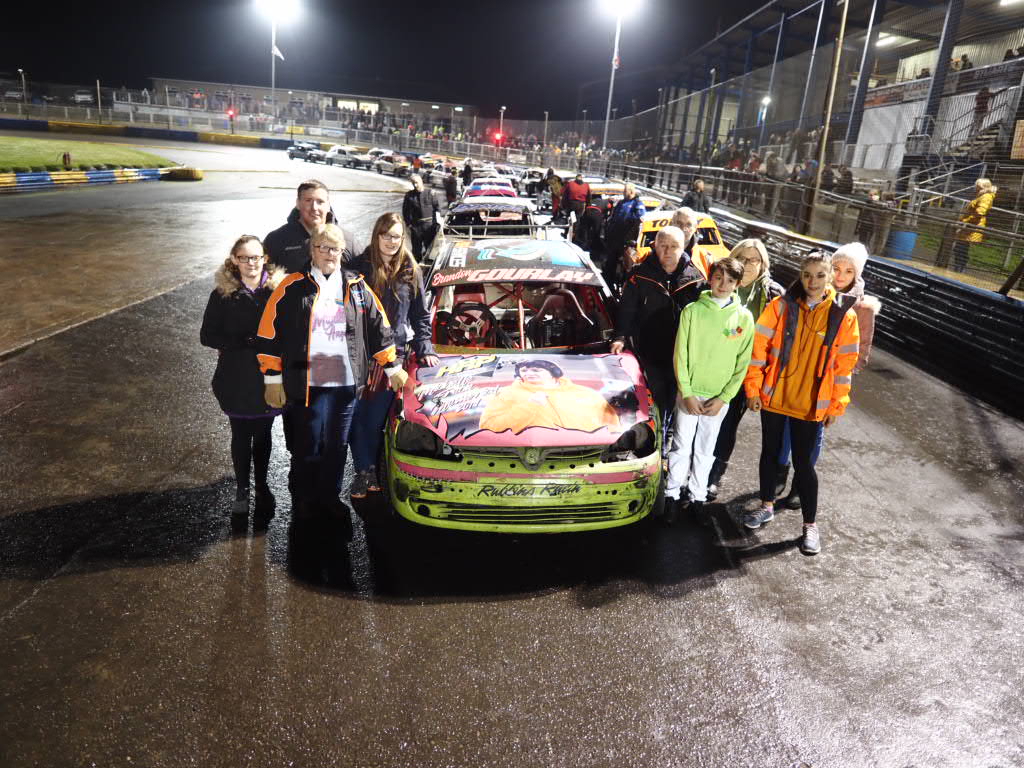