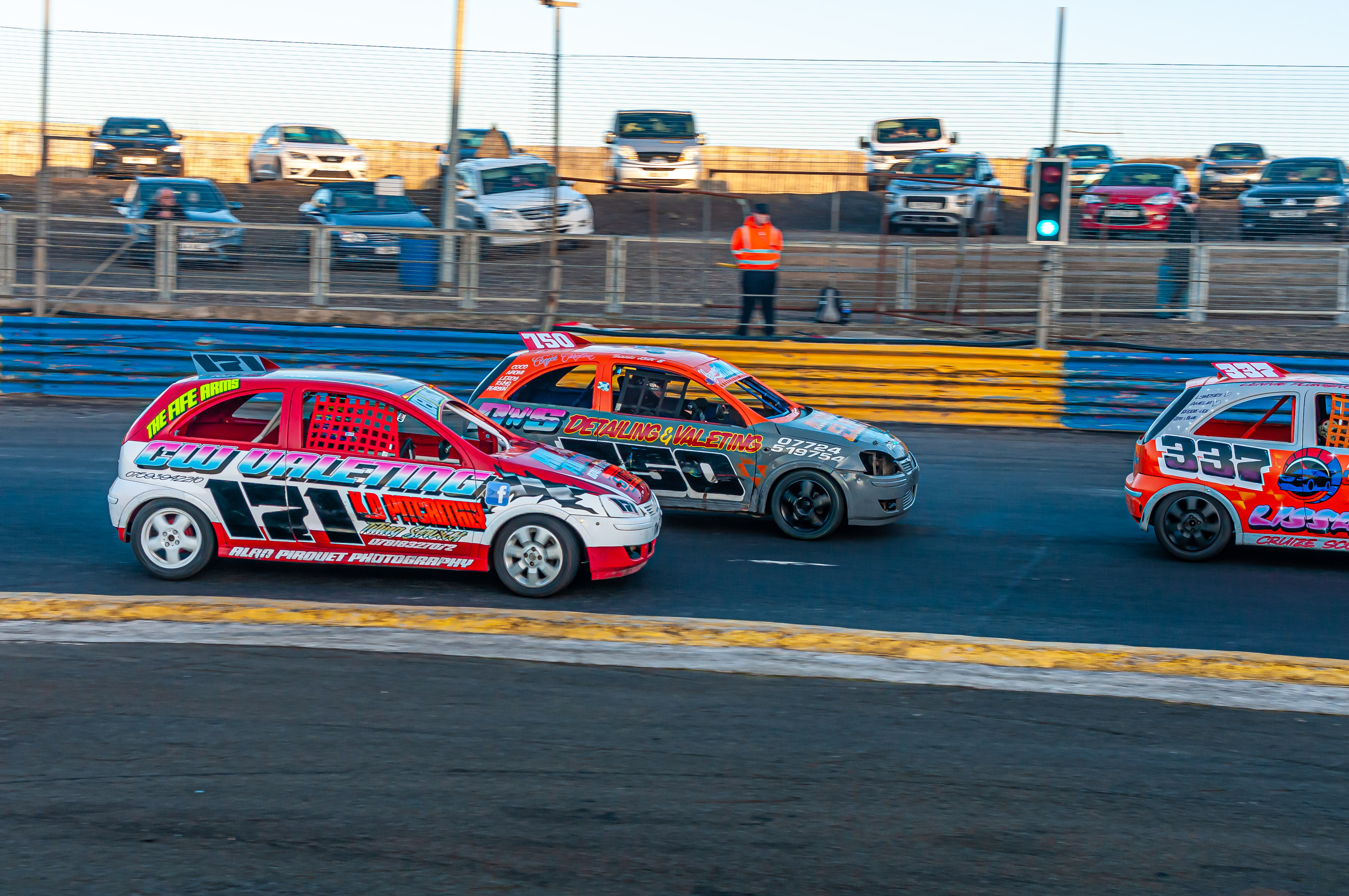 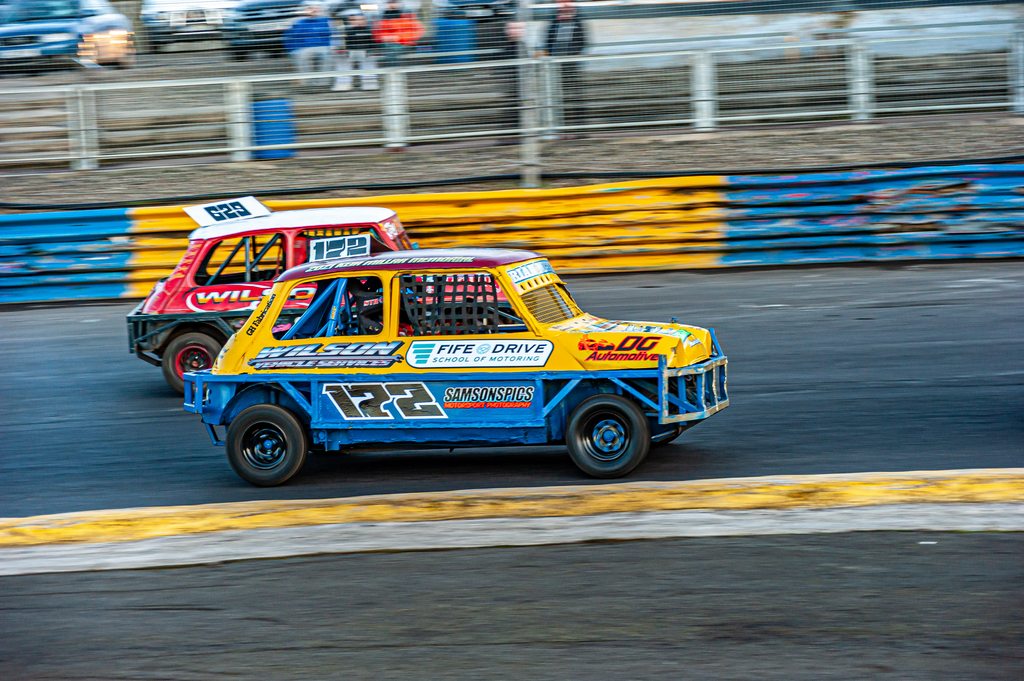 It’s the final Saturday night of the first full month of the 2022 season, and what a quick first month it has been, with some great racing on offer from the majority of formula.

Tonight, we welcome the Ministox, Superstox, Stock Rods, Junior Productions & CC Rods – The CC Rods a late replacement for Bangers, given the lack of bookings for them.

The Superstox formula will see some great racing this weekend, with just shy of 20 cars expected to be in attendance; a number that includes four welcome visiting drivers, including World Champion Nick Roots. Nick will be joined north by Declan Salmon, Bradley Brooker and Gary Chisolm. All 4 drivers have been fairly regular attendees to Lochgelly Raceway over the last 12-24 months. Campbell Scott is hopeful of making his first appearance of the season having had his car re-worked over the winter months. Likewise, Mick Taylor, the fun loving and always smiling driver, is also set to make an appearance this weekend in an all new colour scheme. Jack Turbitt was set to be racing last time out, but a late illness seen him miss out, and he too, will make his first appearance of 2022 at Lochgelly Raceway. Scottish Champion Aaron Riddell will be looking to get back to winning ways, having had an off night last time out, where he also sustained some damage as a result of a coming together with David Frame – Will there be retribution, or will it go down as a racing incident? Dean Johnston will look to take the fight to Lee Livingston with Livingston having a sensational meeting last time out. Adam Low showed off his never say die attitude at the last outing for the Superstox, and that is something that we expect to continue this weekend!! Ciaran Adams will have a final outing in his dad’s car, with his car not quite in a ready to race state. Mark Brady will be with us again, as he looks to continue to develop his all new car that he debuted at the season opener. Kenny McKenzie and David Frame are both expected to be in attendance subject to work commitments.

The Stock Rods are with us for the first of two meetings in succession. Jamie Stewart was in good form last time out and showed some great pace and maturity in holding off a number of drivers in the process. Another excellent performer was Stewart Paterson – Pies, as he is better known, took an excellent heat and final double, with the meeting final being a fantastic race to watch as he fought for everything he had to keep the chasing pack at bay for the duration of the race. Chris Lattka and Gary Dean both sustained some damage last time out, but are both due to be back with us on Saturday night as they look to propel themselves up the points charts. There was a massive rollover for Sam Pate a couple of weeks ago as he somehow managed to end up on the infield area against one of the recovery vehicles. Sammy will be hoping to keep all four wheels on the ground this weekend as he looks to get a few more points on the board. Niall McFerran has arguably been the most consistent driver in the two previous outings for the Stock Rods – as he finds himself moving steadily up the rankings and in the hunt for championship qualification. With a few drivers still to make an appearance, the Stock Rod formula is looking to be one of the highlights of the season with some excellent, close and fast racing!

The Ministox, as ever, have another strong line up of cars for this weekend. A highly competitive formula that boasts a host of star performers, as well as a lot of up and coming drivers, always provides some mouth watering entertainment on track. There hasn’t been any one single driver that has stood out above the rest so far in 2022 given the competitiveness in the class. Robbie Armit, Charlie Hardie, Rachel Kidd, Scott Allardyce, Maddison Gilmour, Rian Mitchell and Ethan Gemmell have all shown some great pace in the first few meetings of the season. Meanwhile, drivers such as Hamish Plenderleith and Ollie Sime have taken to the formula excellently, and will no doubt be soon challenging for race wins once they opt to start from the front of the grid. Demi Ritchie, Sam Cavanagh and Owen Marshall, all have the confidence to put in a performance, but all three have not yet had their fair share of luck – can that trend change this weekend?

The CC Rods, as earlier mentioned, are a late replacement for the banger formula. The CC Rods were in action last weekend, and provided some super racing with just over 15 cars in action. David Glencross and Raymond Brown, both looked the quickest on track. Lee Scott and Kevin Hutchison will be looking to break their duck for the 2022 season as they both look to secure their first wins. Mirran Adams will make her debut in a Mini CC Rod, having moved up from the Ministox class over the winter months – A happy birthday to Mirran, who incidentally just turns 16 a day before this meeting!

The Junior Productions are the final formula in action – another making their second appearance in quick succession. Last weekend, the girl racers shone well, with super performances from Kaitlyn Smart – who swept to a hat trick of race wins – and Olivia Krzyzanowska. Keira Wotherspoon will join the ranks this weekend as she becomes the latest girl on track to give the boys a run for their money! Samantha Rogerson will have one final outing in the class, before she turns 16. William Plenderleith will be looking to secure a first win, having come close on a few times in the formula. William has took to the formula excellently, and has delivered some great pace already. Lewis Duffy looks set to make his second appearance in the formula having moved up from Ninja Karts. Declan Dixon returns to the track following a suspension, whilst Lewis Dickson will look to continue his excellent form of late with consistent point scoring finishes. The Junior Production formula are quickly becoming a must watch formula at Lochgelly Raceway, with some nail biting action taking place on a regular basis on track!