Can Clark Defends The 1300 Scottish 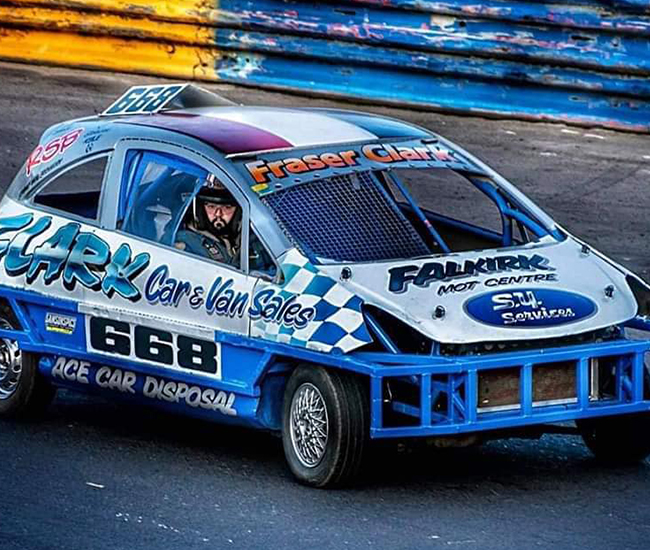 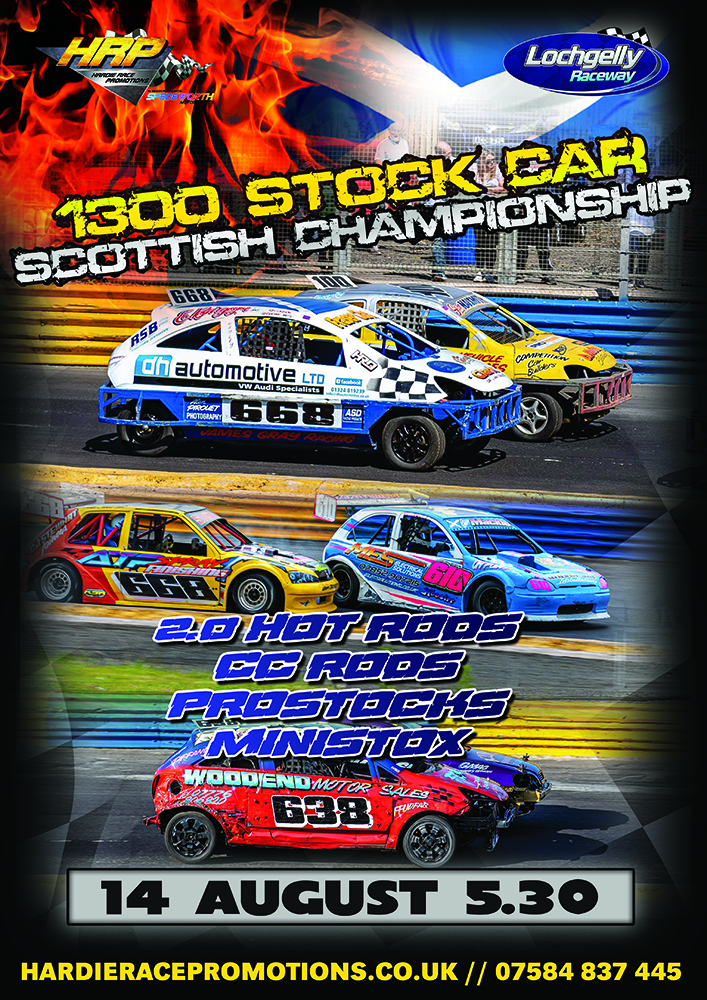 The first of a run of Scottish Championship’s take place this Saturday night at Lochgelly Raceway, as one of the formula’s of the season, the 1300 Stock Cars take centre stage as they battle it out in the quest to become the 2021 Scottish Champion! Fraser Clark won the title in 2020 and will be doing his utmost to defend it! The 1300 Stock Cars will be supported by the 2.0 Hot Rods, CC Rods, ProStocks and the ever entertaining Ministox.

The 1300 Stock Cars are expected to have in excess of 30 cars take to the track as they look to take the prized Scottish Championship away from Fraser Clark. Fraser Clark himself has had yet another consistent year and currently leads the way in the National Points Chart – set to come to an end in just a few weeks time with the World Championship also on the horizon! A bit of fine tweaking on the 668 car over the last few weeks should ensure that the 668 pilot is right up there in contention yet again! Callum Barclay, who has only returned to racing in 2021 having sat out for a few years, is right on the pace, and has shown that he is more than capable of battling through a pack of cars to take a win or 2. Barclay isn’t shy to get stuck in with the bumper as well, and will use it to good effect should he be required to do so on Saturday night! Kyle Hegg has moved on from the Adam project, and switched to a more conventional Corsa setup – and has been rewarded for that bold move! The 715 car has been one of, if not the quickest cars in recent events, and was unfortunate in the National Championship just last weekend in Northern Ireland, having taking 2 heat wins in the qualifying races! Sean Naismith has previously won the title, and will be looking to hit form at the right time come Saturday night as he looks to regain the title he lost in 2020. Andrew and Euan Mathieson both have the speed to take the glory, and neither are shy with the bumper – sometimes to their own detriment however as well! Danny Whyte has shown and upturn in form of late – narrowly missing out on a final win last time out, after being pipped to the post by Callum Barclay. With a random draw for the main event on Saturday – it could literally be anyone’s race, and won you certainly do not want to miss!!!

The 2.0 Hot Rods are back with us for the first of 2 meetings in succession – Gary Black makes a welcome return to action having missed out on over a years worth of racing after suffering a lot of damage the last time he was out on track. World Champion James Morris will join us on the grid, as will Superstox National Points Champion Bryan Forrest. Classic Hot Rod driver Keith Chesher will again take to the track in the 2.0 class, whilst Jock Campbell, Kevin Stewart and Jason Secker all look to put up a challenge in the 2nd half of the season in the quest to become the 2021 Track Champion.

The ProStocks return following their exploits at the World Cup last weekend – which was won by HRP’s Ian Christie. Christie will be showing off the Gold Roof for the next 12 months or so and will be hoping to carry on that form this weekend as he aims to take away another couple of race wins on Saturday night. The ProStocks have been in good form in 2021 at HRP, and this weekend looks set to be another decent evening with around 15 cars expected to be in attendance. Becki Ritchie will make her debut in the class, whilst Tiffany Mills will also make her debut, out in the Darren Rae car. Grady Ross returned to action last weekend with a new car, and will show it off at HRP for the first time on Saturday night. Jason McAlpine has become a regular attendee in the ProSTock class – and has previously shown he has the pace to compete with most drivers on track, but quite often scored a few DNF’s given his all or nothing style on track – certainly entertaining and always one to watch if your looking for some on track action!

The CC Rods have another strong line up of cars – just under 20 cars will take to the track. The non-contact formula have provided some excellent, competitive racing over the last few years, with Brandon Gourlay stepping up and being the ‘one to beat’. Dylan O’Donnell won two out of three races last time out, on his first outing in the formula, but will be starting a little further back this weekend as he looks to take away another couple of trophies. Graham Campbell was one of the quickest cars on track last time out, can he make the most of his yellow grade starting slot. Kevin Hutchison and Kyle Hutchison will both have their work cut out as they battle it through from the red grade in each of the heats. Despite the ‘non-contact’ nature of the formula, the formula is generally entertaining, with a few hair raising moments thrown in for good measure – a formula that has become well worth watching at HRP – although the drivers will be warned beforehand about contact in the class!!

Ministox, are the fifth and final formula in action this Saturday night. The youngsters have been one of the success stories of recent years – with numbers strong consistently, they calibre of driver and racing they provide is nothing short of excellent. Jay Paterson and Jay Carruthers are two of the on-form drivers, both drivers picking up a number of great results in the last 5/6 meetings. Lewis Burgoyne seems to have upped his game lately too – becoming one of the quickest drivers on track since the Scottish Championship event, where he was unfortunate not to pick up some better results over that weekend. Burgoyne will be looking to continue his recent run of pace this weekend, and aim to pick up a few results that he arguably deserves. Rian Mitchell has been a different driver since making a return following a short lay off due to damage – picking up the Keir Millar Memorial for his efforts, as well as a handful of other podium finishes since. Can Rian continue that form here at Lochgelly Raceway this weekend, or will the likes of Scott Allardyce, Charlie Hardie and Jake Wilson reel him in. Kieran Wood looks set to make his first appearance at Lochgelly Raceway as he makes the trip south from his northern base.

First race 5.30pm! Join us then for an action packed evening of racing!!

Driver Info
Stay in car at all times unless instructed otherwise.
Race winners should drive beyond the pit gate and park on the infield area against the infield barrier at the first rumble strip, where they will be safe to exit the car.
No overtaking the pace car
No driving through the middle area.