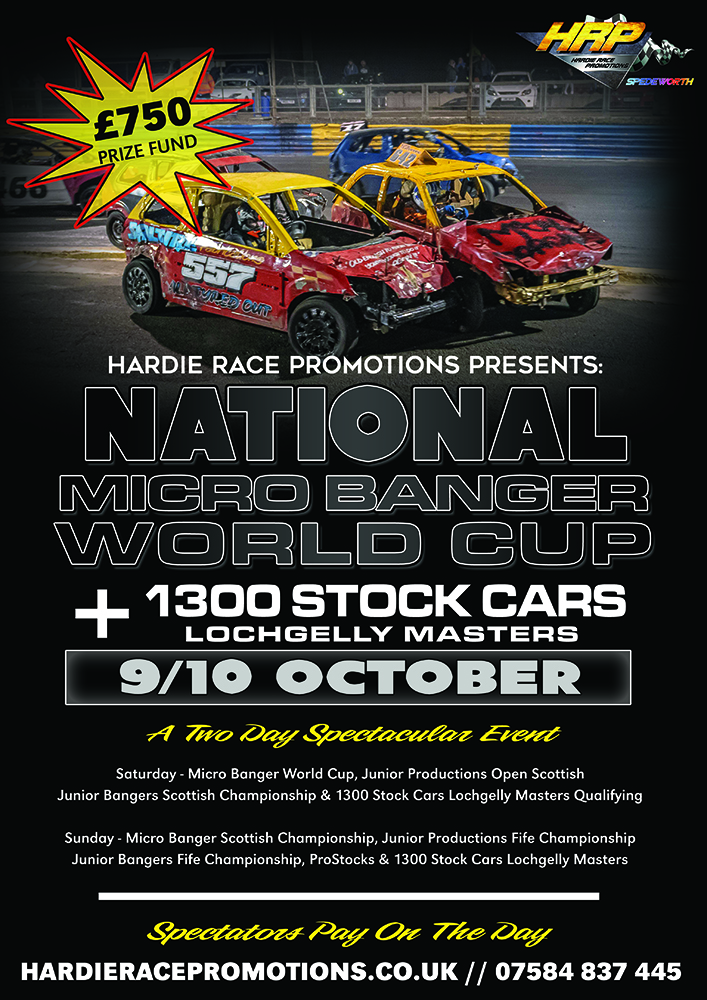 With OVER 70 BANGERS booked into race this weekend, it looks set to be an all action affair!!

Driver bookings are still open for all formula for the National Micro Banger World Cup Weekend. Bookings can be made by visiting the Online Shop on our website, and selecting the relevant formula for each of the days.

The 2020 World Cup winner Joey Reynolds is expected to be back with us as he bids to make it 2-in-a-row for the Micro Banger class! A host of star drivers will join in on the action, including 2l Saloon Stock Car driver Will Morphey. Andy Armstrong has shown to be one of the drivers to beat at Lochgelly Raceway in the Micro Banger class, and will be looking to make that experience count this weekend as he bids to become the World Cup winner, 2021! Other drivers will be out, and looking to put on a show, such as Lee Clarke and Norman Moore for example! With the 2 days of action, there will be a number of drivers looking to keep the car lasting throughout the weekend, whilst others may have a 2nd car ready for day 2 of action! One thing for sure, is it promises to be a weekend full of action!

The World Cup will headline the weekend, however, with the Scottish Championship and DD on the Sunday both days are sure to be action packed!! The Junior Bangers contest their own Scottish Championship on the Saturday, whilst they race for the Fife Championship on the Sunday. A number of Scottish based drivers will be hoping to make local experience count, though, with the formula being a visiting formula, the experience of the more regular drivers may be the difference in the Junior Banger class!! The 1300 Stock Cars will race for the Lochgelly Masters over the 2 days and with between 20 and 30 cars expected, the bumper brigade will be looking to put on a show, and steal the plaudits in front of a large crowd.

The Junior Productions will feature on both days as well, with over 20 cars expected to be in attendance!! A host of Northern Irish visitors will bolster the grid for one of the most improved formula in recent times!

The ProStocks will feature on the Sunday and are always certain to provide some great racing, with the occasional mishap along the way!! Darren Rae and Tam Melrose will likely lead the line as the pair battle it out closely for both the National and Track Championships!

Racing kicks off at 4pm on the Saturday, and 12.30pm on the Sunday!

Drivers Notes
- Drivers must remain in cars at all times (even under race suspensions and red flag stoppages), unless instructed by an official to exit the car - this includes banger drivers.
- Driver Sign in WILL CLOSE 15 MINUTES before the 1st race
- Park in your designated area - the pit marshal will instruct you where to park.
- Take any car parts etc away with you, use the bins provided, or bag up your rubbish. Leave the pit area as you found it.

Micro Bangers
- No going through the middle
- Turning around only on corners from outside in throughout races (DD exempt)
- No attacking of cars on infield area - at least 1 wheel must be on the track
- Steward Decision is final
- Seeded entries to be lined up ready 1 race before the main race. Last chance drivers will be instructed to enter track once all seeded drivers are on track and lined up.

Overnight Stays
Drivers and Spectators are permitted to stay on site at no charge. There is no overnight stay permitted around the raceway, only in the car park and pit areas. Any caravans / vans must pitch at the back fence area, adjacent to the Lee Smart Racing garage.

* Micro Bangers World Cup - Seeded Entries must be in the holding area ready to go into tunnel once the race before is on track. Last Chance drivers must wait until instructed to go into the tunnel.

* Race will end with green and checkered flag, which will commence the start of the DD at the same time.

Spectator admission will be on the gate each day, and priced as follows.