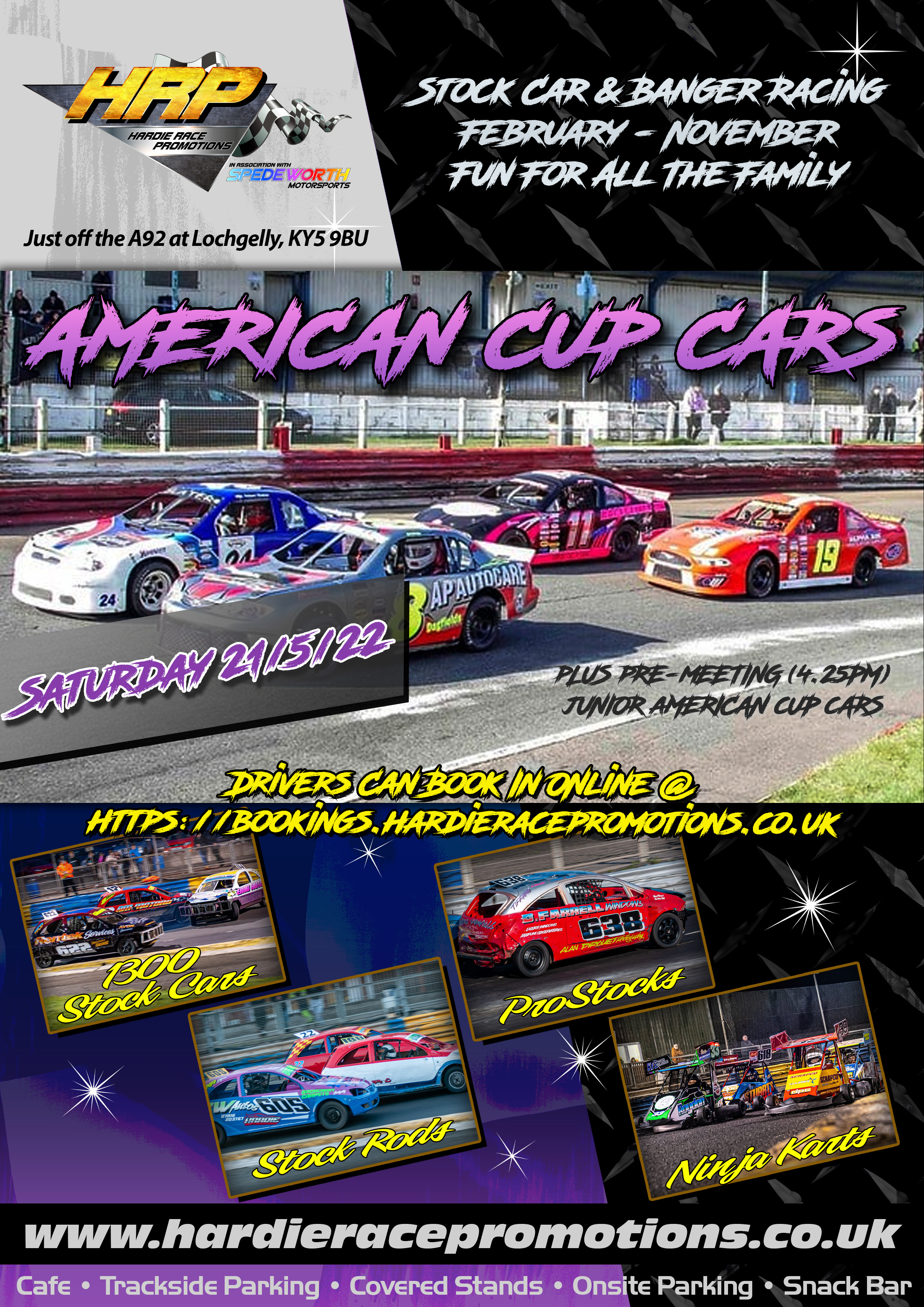 Saturday 21st May will see the American Cup Cars head north to Lochgelly Raceway as they contest their 2022 Scottish Championship.

Around 20 of the American Cup Cars are expected to be with us, whilst the junior version are also in attendance with some pre-meeting entertainment. The Ninja Karts are back with us for the first time since the British Championship, with another good field of cars expected to be with us. Kenzie Bell will show off the British Championship roof for the first time since being confirmed champion.

The ever entertaining 1300 Stock Cars, ProStocks and Stock Rods are all in attendance.

A healthy field of cars across the majority of formula will see some great racing take place. The 1300 Stock Cars should have 20+ cars on track this weekend. Gregor Whyte and Kyle Hegg have both been in great form of late, and will be hoping for more success on Saturday. Joe Giles is set to make an appearance north of the border as he looks for some track time ahead of the British Championship in just a few weeks time. Charlie Henry will be back on track following her spectacular roll-over last time out, whilst Steven Bisset is set to make his racing debut.

The Stock Rods have look set to have some great racing with a highly competitive grid of cars taking to the track. World Champion Siobhan Martin will lead the line up, though there will be plenty of competition from Gary Dean, Chris Lattka and Darren McAlpine. Mark Curran will again make the trip south to be with us from his Shetland base, whilst Connor Mason is set to make his first appearance of the campaign. Brett Sneddon isn\'t currently booked in to race despite having taken a hat-trick of race wins last time out.

The Ninja Karts will welcome Jenson Fish and Jack Jones north of the border again, with Kenzie Bell set to show off his British Championship roof. Connor Anderson and Tommy Melrose have both been steadily improving in the formula, with the latter set to make an appearance in a new kart this weekend. Layton Cairns will be looking to take another win, having taken one of the race wins at the recent British Championship event.

The ProStocks are with us, having last been at Lochgelly Raceway several weeks ago. The ProStocks often provide entertaining racing, and you never know what is just around the corner in the budget class.