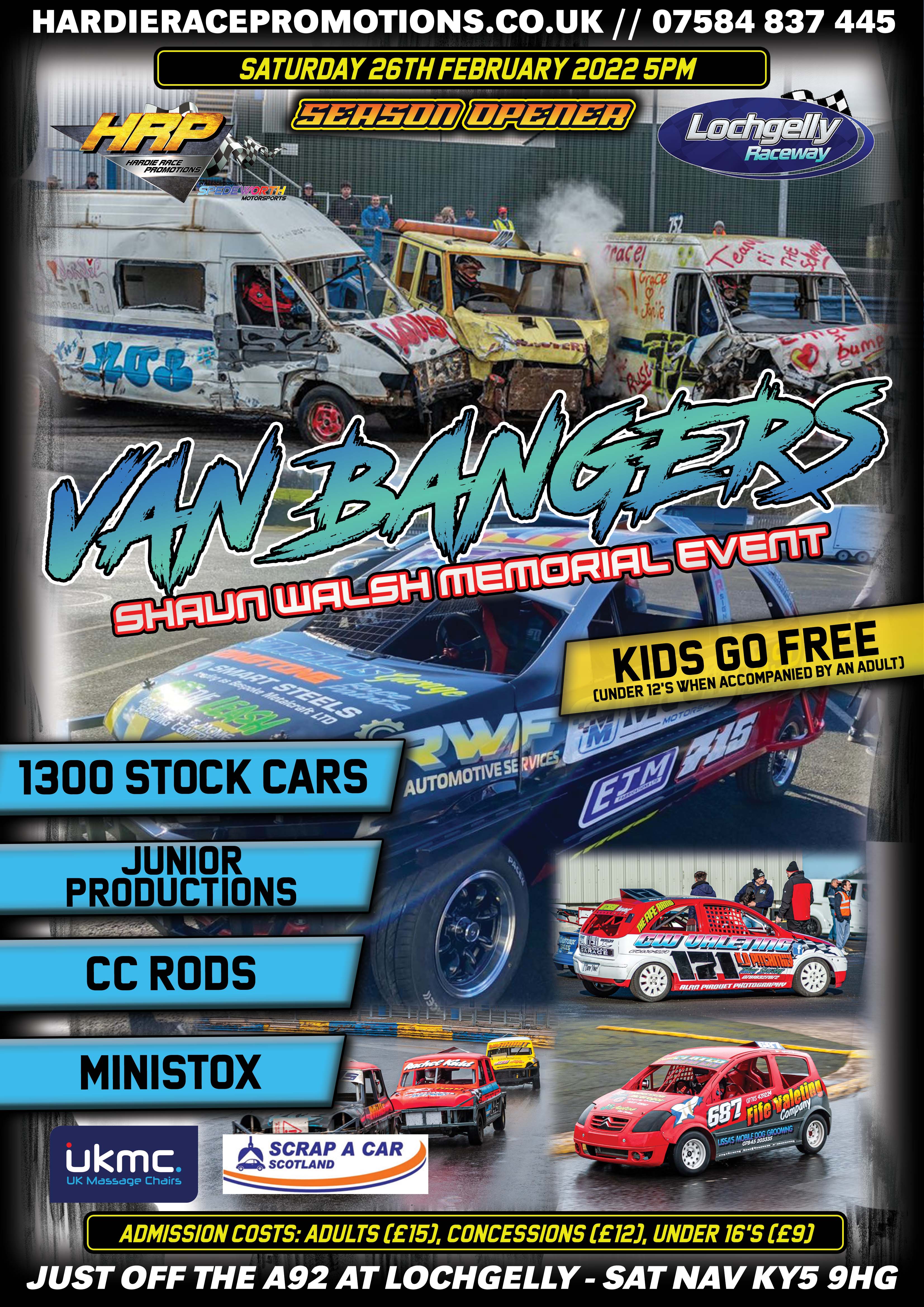 The 2022 season is finally upon us at Lochgelly Raceway, and it all kicks off at 5pm this Saturday night!

The Shaun Walsh Memorial event will be contested for in the Van Bangers, which has been won by Jim Dillon and Neil Naismith in recent years. Steven Adair and Liam Boden are expected to make the trip north to join us in what should be an entertaining affair from the Van Bangers! Lee Clarke will make an outing in what is another well turned out van, whilst Chris Thomson will be eager to take glory in one of the meetings that he never wants to miss. The evening will be rounded off with a demolition derby for what remains from the Van Bangers!

The 1300 Stock Cars are in action, with Kyle Hegg and Fraser Clark expected to both be in attendance – 2 of the top performers from 2021. Kyle Hegg, had a phenomenal season as he scooped several championships across the season, though, Fraser will be keen to put up a fight in 2022. The 1300 Stock Cars provided some superb racing in 2021, and with a field of cars that is only expected to grow in 2022, it looks set to be another cracking season in the pipeline. A number of new drivers are expected to join in on the action, including Robbie Little, James Dickie and Ally Strachan.

The UKMC sponsored Junior Productions kick off their own 2022 campaign on Saturday night, with a host of new cars and new drivers expected to be on track. James Slater and Jack MacLeod have both shown off new cars at the Lochgelly Show last Saturday, and both will be looking to kick off their season’s in the best possible manner. Current Scottish and National Points Champion, Jase Walle likewise has some new machinery at his disposal, and is another stunning car! Brooke McMullan, Chris Davidson, Lewis Duffy and Aiden McKinnon are all expected to make their Junior Production debut’s as the formula continues to go from strength to strength.

The CC Rods are in action as they provide some more non-contact racing – Kevin Hutchison has a great campaign in 2021 and managed to claim the silver roof for the 2022 season, he’ll be looking to get off to a flier this weekend. Newcomer to the formula, Lia Heeps looks set to make her debut in a brand new car.

The Ministox, arguably one of the most consistent formula over the past decade, are with us for the season opener. A huge field of talent is always on display, and with around 25 cars due to be in attendance, the season looks set to start off in fantastic fashion. Charlie Hardie, Scott Allardyce, Rachel Kidd, Lewis Burgoyne and the returning Robbie Armit will look set to be front runners in the opening meetings, however, with more and more cars set to join in throughout the season, things are only going to get tougher and tougher for those starting further back the grid. Hamish Plenderleith, the current Ninja Kart Scottish Champion is set to make his debut in the Ministox. A trio of visitors from the south of England are welcomed, with Mia Batten, Bobbie Beere-Rees, and Austin King all making the welcome trip northbound.