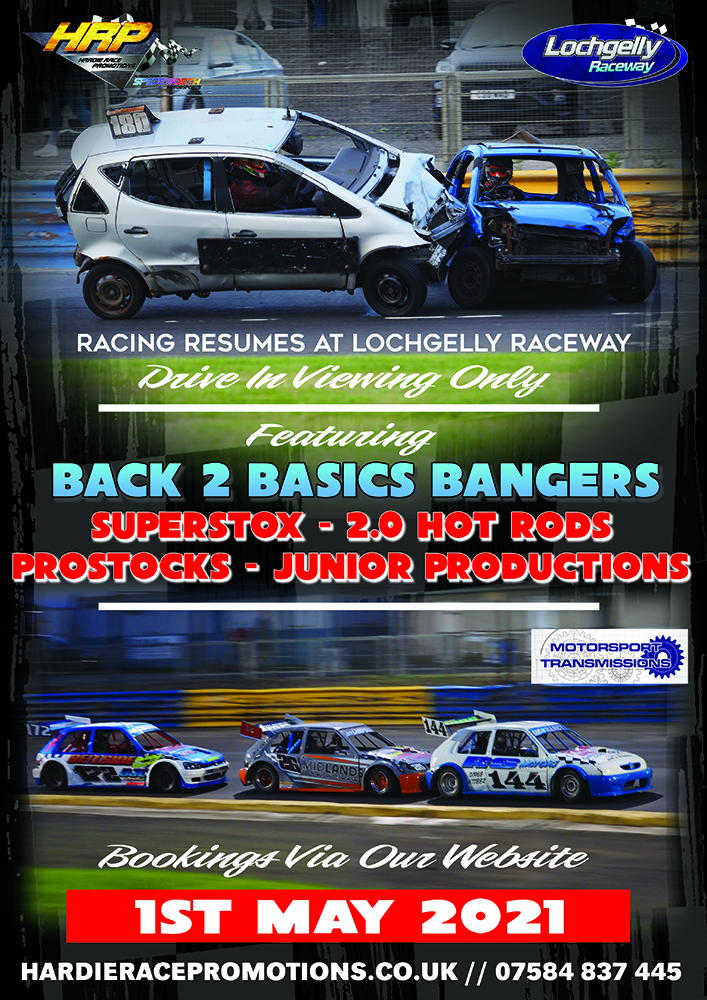 This Saturday night sees the return to racing at Lochgelly Raceway with drive-in viewing permitted in what should be a fantastic five formula line event.

The 2.0 Hot Rods have seen a host of visiting drivers book into race with us, with a good amount of our own drivers ready for action as well. Track Champion Kevin Stewart will be looking to hit the ground running as he aims to defend his title this year - Though there will be fierce competitions from the likes of Gerry Hendry and Marc Honeyman - both of whom are booked into race this weekend as well. National Hot Rod World Champion expects to be with us as well as he hopes to participate in the majority of events this year in the 2 litre class. Jason Secker will make his debut as he tries out racing in a non-contact class for the first time. World Champion, Dave Leech is no stranger to Lochgelly Raceway and will be looking to find the optimum setup, with the British Championship set to be held here in June. Joining Dave on the grid will be James Morris, Ross Eaton, Alan Thorndyke, Mitch Souter, and Jason Jackson!

The Superstox likewise, will be keen to put on a show in the 2021 season opener for the formula. The Roots clan will be out in force as they make the trip north - Dan, Chris and Nick are no strangers to success and will all be looking to take away a trophy or 2 each! Joining them from south of the border will also be Ian Beaumont, and the returning Billy Smith. Bryan Forrest will lead the Scottish charge as the National Points Champion hopes to show the visiting contingent the way around Lochgelly Raceway. Allan Adams and Paul Prentice both look set to make their debuts in the class, whilst Kenny McKenzie, Ciaran Adams, Dean Johnston and Mark Dews will all be looking for on track success which could lead to some hotly contested races!!

The Junior Productions see a number of newcomers make their debut - Olivia Krzyzanowska, Cole Ford and Declan Dixon. All three will be looking to complete the evening with no major issues as they bid to stay out the way of some of the more experienced drivers. Jensen Bell and Jack MacLeod have both looked quick in the pre-season practice sessions, though you can never rule out former Scottish Champion Koddi Wright. Matthew Weir and Chelsey Rainey both join us again in what may be an eventful evening for the youngsters! A formula that certainly provides entertainment on most occasions!

The Back 2 Basics Bangers were a formula that rose quickly in 2020 - it is hoped that it will continue in the same form in 2021. The early booking list already shows a number of relative novices when it comes to Banger racing including Garry Roberts and Grant Watson, bolstered by a number of more experienced drivers, having a shot in the budget easy to build formula. A number of drivers are yet still to book in, with numbers anticipated to be around 20 cars come race day!

The ProStocks likewise, still have a number of drivers to book in - though with a late influx expected, we hope to see 15-20 cars on track come Saturday evening. Jake Mason makes the step up from ProStock Basics, and will be making his debut at Lochgelly Raceway as well. John Mason and Paul Winfield will join him on the grid, alongside a host of regular drivers.

Online Booking Only - Via Our Online Shop.