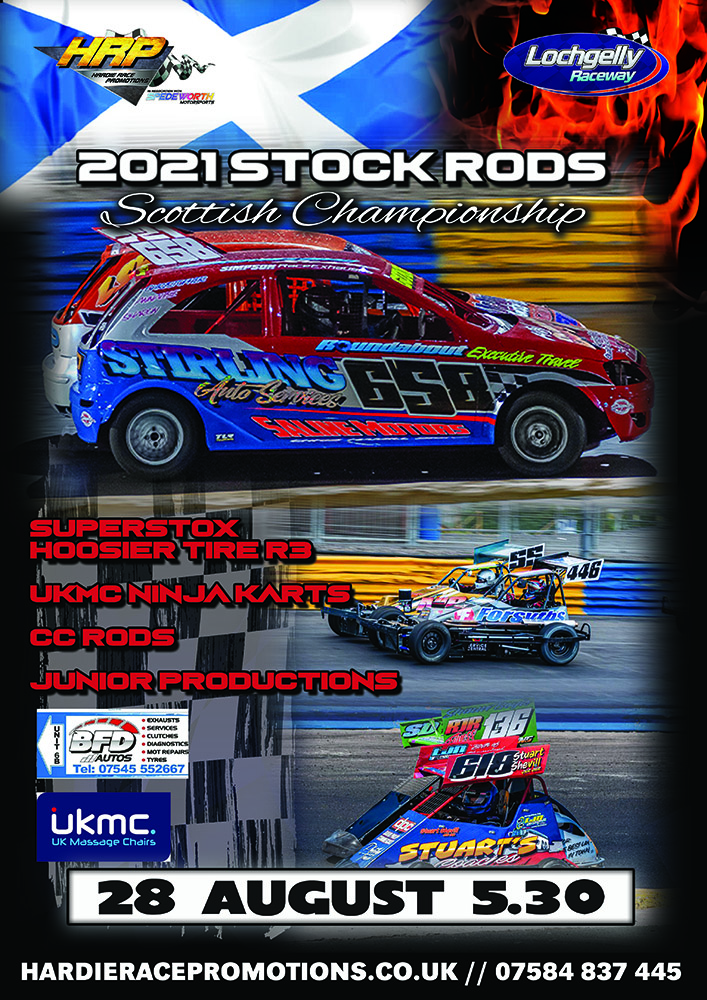 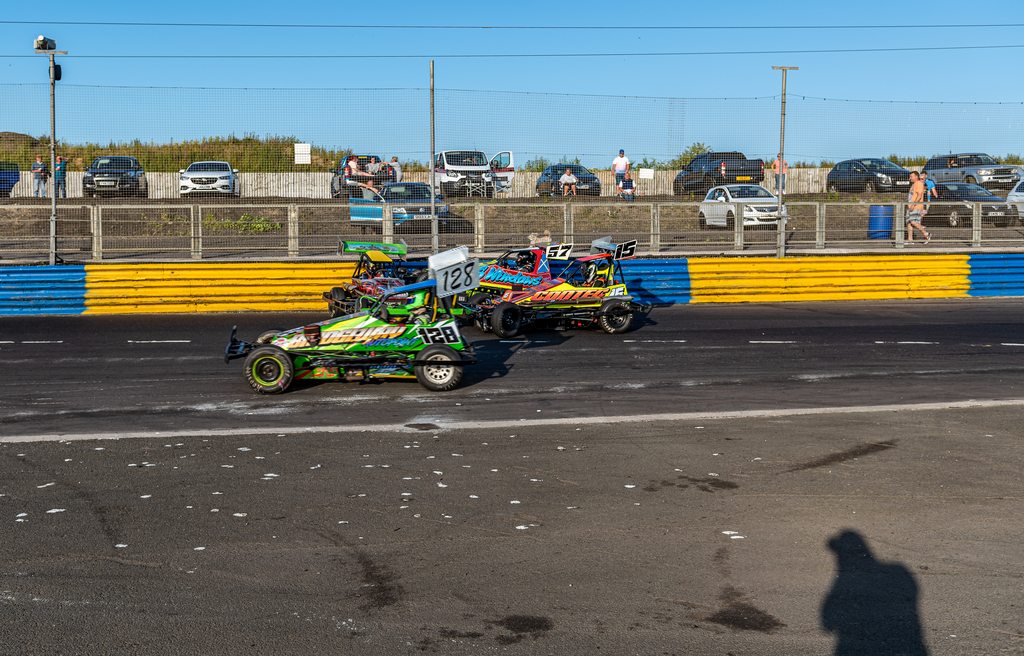 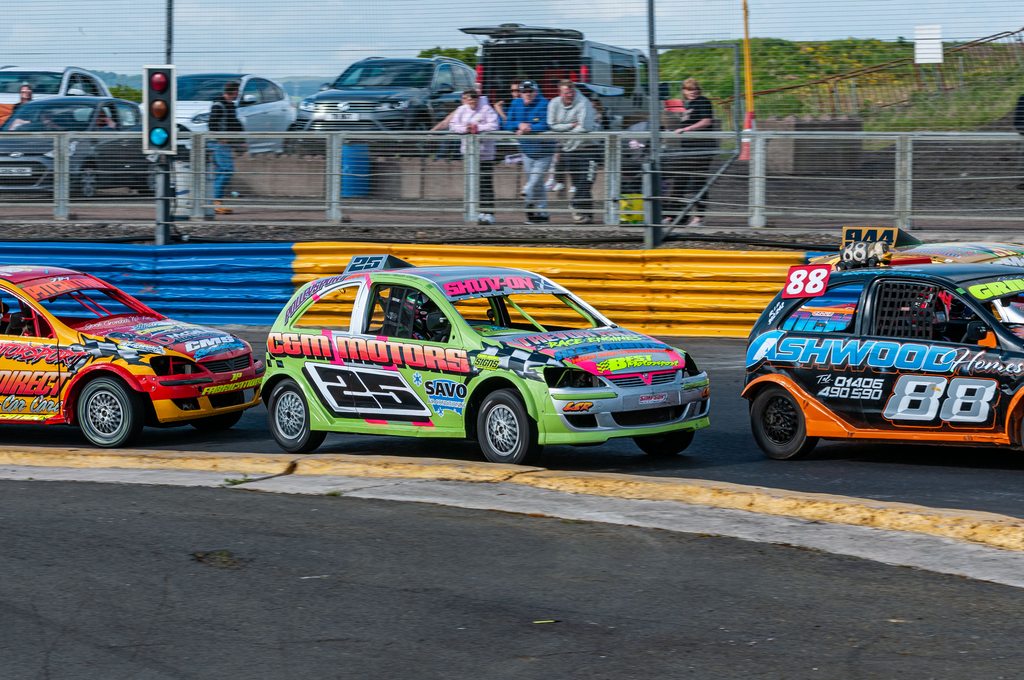 The time has come for the 2021 Stock Rod Scottish Championship event to take place.

The Superstox (Tire Series Round, sponsored by BFD Autos), CC Rods, Junior Productions and UKMC Sponsored Ninja Karts all also feature in what should be a lively 5 meeting encounter.

Chris Lattka - who is contemplating retiring at the end of the season - will defend the title he won in 2020, possibly for the last time. Gunner has been a familiar name around the ovals for the last few decades, graduating from Ministox and winning all there is to win in Stock Rods over the last 20 years, as well as winning the Scottish Championship twice in the 2.0 Saloon Stock Cars as well. Chris has no shortage of experience, and depending on the grid draws this Saturday night, will certainly be one to look out for and if he can get to the front, he knows how to hold a lead - can he win his 10th Scottish Championship?

Siobhan Martin - Arguably, the top Scottish Stock Rod driver over the last decade - winning many titles both at home and on her travels. Siobhan recently won the National Championship at Hednesford and will certainly be a front runner in the Scottish Championship race. Luck has often evaded her though in this race historically, but she will go into the race full of confidence.

Gary Dean won the Stock Rod Scottish Championship a couple of years ago, and at times, has struggled from the back in a hugely competitive field of cars, however, recent months have certainly seen Gary get back to his best, and up their challenging for the race wins, taking away several strong finishes as a result of his efforts. Gary will give his all this Saturday night as he looks to regain the title he lost last year.

Jim Pitcaithly has won several titles in the Stock Rod class over the years, and most recently picked up the Lochgelly Masters earlier this season. Jim Pitcaithly has been one of the quickest drivers of 2021 so far, though has had some misfortune along the way. Jimmy P will be looking for reliability and consistency this Saturday night as he bids to add the 2021 Stock Rod Scottish Championship to his roll of honour.

Stewart Paterson has prospered from dropping down to blue grade, but with 2 random heat grids, the luck of the draw may determine his fate this Saturday night. A cool head will be required, and possibly a bit of good fortune on the night, but on his day, he can be a match for the majority of drivers.

Darren McAlpine knows his way around Lochgelly Raceway better than most. Darren has flown under the radar throughout the season, but has generally scored well from the back of the grid consistently. A good draw may see Darren score well in the 2 qualifying heats and put him in with a shout of becoming the Scottish Champion.

Brett Sneddon has shown good pace throughout the season, and is another driver that has vasts of experience. Brett has started from the back of the grid on several occasions, and always seems to come through to score well. Saturday night could be his night!!

David Crichton has shown he has the pace to challenge, but a run of bad luck has seen him drop down the grades. Some good fortune on the night, could see him challenge. A possible outsider, but you have to be in it, to win it!! Robbie Hamilton and Harvey Sneddon have both moved up from junior formula this year, and both have found their feet in the formula. Hamilton has picked up a couple of wins on his travels, whilst Sneddon qualified pole position for the last stock rod final at Lochgelly Raceway. Sam Pate, and Craig Harrison are both relative newcomers to the sport, having only completed just over a season of racing. Both drivers have picked up the pace through the experience gained, and will be on the track this weekend. Ian Donaldson recently made the switch to the Stock Rod class, and will be starting from the rear of the grid having not done enough meetings to ensure his eligibility in the grids. Craig Mason will also be out on track, though with his time squeezed between the CC Rod and keeping several other cars on track as well, the Stock Rod probably hasn\'t had the full attention of late - That being said, Craig has a lot of racing experience and will do his best this Saturday night.

The CC Rods will feature alongside the Stock Rods for what could be the first time this season. The CC Rods have provided some excellent and entertaining racing of late, with some excellent driving from the drivers within the formula. Kyle Hutchison has been one of the top drivers this season and will fancy himself for a crack at the track championship as the season draws on. Ian Christie and Kevin Hutchison have both likewise been consistent performers, though an excellent field of cars makes coming from the back tough at times. Dylan O\'Donnell has been a driver in super form since making his debut a couple of meetings ago, and has since scooped several race wins. He will find the going tougher though as he moves back through the grades.

The Superstox will race for the tires in the latest round of the Hoosier tire series - this time the round is sponsored by BFD Autos with the race winner and top white or yellow graded driver going away with a new tire. Bryan Forrest and Dean Johnston have had some fantastic races of late, and that will carry on into this weekends racing as they battle it out for the National Points and track championship titles. Mark Brady will be back with us having missed out last time due to other arrangements, whilst Campbell Scott will also be looking to take away a few points finishes this weekend. Ciaran Adams looked to have found some good speed at the last meeting, though didn\'t have much to show for it - he will be hoping to continue that improvement on Saturday night, and will be looking to challenge for some silverware.

The UKMC Ninja Karts are back with us following their travels last weekend. The points battle at the top of the charts is as close as it ever has been, with several drivers up there and in with a chance of winning it. Hamish Plenderleith and Kenzie Bell have arguably both been the quickest drivers of the season that will be out racing on Saturday, though haven\'t always had the best of luck in their quest for glory. Aiden Duffy, Kenzie Kopacz and the ever improving Stuart Shevill Junior have all shown good form as well and can never be discounted. Clark Ferris makes the trip north to be with us again this weekend, and he will be looking for another successful trip north.

The Junior Productions continue to go from strength to strength, and it is great to see a number of the newcomers start to score some good results. Cole Ford and Lewis Dickson have both been up there challenging for race wins this season, and both have taken away a decent haul of points for their efforts. Declan Dixon likewise, he has been quick from the outset, and looks to be gaining experience and racecraft to go with the raw speed that he has shown as well. Jack Baird joined the ranks not too long ago neither, and definitely has good pace. Sometimes a little to eager though, but that will improve with experience on track and no doubt race wins are on the horizon for the youngster. Further back the field, Koddi Wright continues to chase down Jase Walle in the track championship, though with Walle scoring well consistently, it will be a tough ask to close the gap at the top. Jack MacLeod has seemingly returned to form as well having picked up a race win last time out. Jack started the season off excellently, but suffered some damage and the car hasn\'t seemed the same since. Dylan Smart and James Slater have both upped their games in 2021, now with both drivers scoring well, and challenging for podium positions on a regular basis - the grid is as competitive as it ever has been and the racing just gets better and better.