And as if by that, we had reached the end of the normal season with our ‘season finale’ on Saturday 7th November, an event that featured the ever popular Van Banger Scottish Championship and Fireworks!

Just under 20 Van Bangers took to the track as they entertained those onlooking from the heat and comfort of there cars & vans. The first race of the night for the vans was in fact their Scottish Championship event, which took place in a thick fog which had descended upon the raceway in the previous hour. As the green flag was dropped by the ever present Jack Freck, the lights turned green and the Van Banger Scottish Championship was underway! A new winner would be revealed with reigning champion Neil Naismith unable to defend. No sooner had the vans entered the 1st lap, there was the 1st casualties with Barry Jarman stricken on turn 2. The rest of the field went about there business, crashing, pushing and some trying to get to the front – The early leader was Jamie Sangster, though briefly dropped down having been overtaken by Zander Martin. Taylor was soon back up in front though as Zander caught trouble which nearly ended his race. Behind Sangster up front, Calum Campbell and Sean McConnachie chased down the slowing Zander Martin and with only a few laps to go, both drivers moved up into 2nd and 3rd respectively. There would be no catching Sangster up front though, as he somehow managed to avoid the carnage around the raceway. Heat 1 of the night for the vans again seen most of the drivers make it out on track, with new Scottish Champion Jamie Sangster suffering from quite some damage in the early stages which would see him retire from the race. Shaun Mitchell drove away from the green flag and hit a few vans on the way as he raced to a race win, with McConnachie finishing 2nd and Callum Campbell in 3rd. Heat 2 of the night seen Ross Stewart take the win, ahead of Rhory Smith and Sean McConnachie again. The Demolition Derby seen 7/8 vans survive till the end as they went about trying to take the DD win. Rhory Smith looked set to be the driver to take the honours, but drove hard into the back of the Zander Martin van, ending his chances in the process! Martin was ailing though, with his van lacking a lot of power, and in the end, a hit with McConnachie seen his van also grind to a halt, meaning that McConnachie would take the DD win!

The UKMC sponsored Ninja Karts were in action with 4 quick fire races on the schedule including a whites and yellow race, which seen Saul Galloway take his first win in the formula since starting out last year. Leeland Dearn had a shunt with the wall which seen him require some medical attention though was able to walk away, but would mean the end of his nights racing due to damage to the kart. The first heat of the night seen just under 20 karts on track which was enough to provide some excellent fast and furious racing from the youngsters, in a race that went flag to flag without any stoppages, although Saul Galloway and Cameron Mason did have a coming together which seen both karts spin clear off the racing line. Kenzie Bell drove excellently from the back of the red grade to come through to take the win, ahead of Hamish Plenderleith and Leighton Hughes. Heat 2 of the night seen Lewis Duffy come to form in what was his final meeting in the Ninja Karts before moving on into the Junior Production class. Lewis claimed an excellent race win, finishing ahead of Dougie Kidd Jnr and Toby Tyson. The final race of the night for the youngsters seen them battle trickier track conditions which resulted in a few stoppages throughout the race. Jack Baird found himself against the wall having spun around and stopping against the barrier. No sooner had the race got going, and there were other karts spinning around, though thankfully most managed to rejoin quickly. Keiron Hay however wasn’t quite so lucky as he spun around on the greasy surface on the exit of turn 4, with the kart facing the wrong way with the oncoming traffic – as a result, the yellow flag was again called for. Toby Tyson took the race win, overcoming Lewis Duffy in the closing laps of the race, with Duffy finishing 2nd and Kenzie Bell finishing 3rd.

The CC Rods were back with us following on from there Scottish Championship last weekend. Brandon Gourlay showed off the saltire on the roof for the first time but found life tough coming from the back of the grid throughout the night. Heat 1 seen Gourlay set some of the quickest laps of the race, but was too little too late as he found himself stuck behind Ryan Cameron for a few laps too long. Kevin Hutchison took the race win, with Lee Wotherspoon finishing 2nd and Kenny Pitcaithly rounding out the top three – a great achievement considering the damage sustained last weekend. As the cars crossed the line, a coming together between Craig McComb and Raymond Brown seen Brown spin as he crossed the finishing line, only to be collected by Paul Bell. As the cars all swerved to avoid the Brown car, Kyle Hutchison ran into the back of Dylan Coutts, with enough force to send his car over onto its roof! Heat 2 of the night seen Lee Wotherspoon continue his good form, as the lower graded drivers continued to dominated in the CC Rods, Wotherspoon took a race win, with Hutchison finishing 2nd and Emma Kirk rounding out the top three. The meeting final seen Wotherspoon and Hutchison occupy the front row of the grid. Wotherspoon got away well and come the exit of turn 2, found himself in the lead of the race with Hutchison behind. Wotherspoon would open up a bit of a gap to the field behind, though heat one winner Hutchison found himself drop down the order. Emma Kirk continued her good form, as she brought her car home in 2nd place behind Wotherspoon up front. Dylan Coutts finished in 3rd place! The results on the night mean that should we get the green light for our Winter Series events, that the track championship is still on the line with several drivers all within touching distance of the title!!

The Ministox joined us, with 20 cars taking to the track yet again – the youngsters have provided excellent racing here at Lochgelly through the curtailed 2020 season. Heat one of the night seen Ethan Gemmell make great progress as he led the early stages of the race, only being overcome by Rachel Kidd in the closing stages of the race, with Gemmell hanging on for 2nd place and Charlie Hardie bringing his car home in 3rd place. A special mention to Mirran Adams as well, who was only overtaken by Hardie in the last couple of laps as she lost out on 3rd place, but continued to battle on for an excellent 4th place finish. Heat 2 of the night seen a yellow flag wipe out the lead of the front runners enabling the pack behind to close right up. It was Lewis Burgoyne that took the win though, coming through from the red grade to steal the plaudits. The meeting final seen yet another excellent race from the youngsters. Mirran Adams again was showing great place and battled to maintain her place in the podium places before being spun out by Scott Allardyce midway through the race. Charlie Hardie took the race win, finishing ahead of Ryan Borthwick in what is his final Ministox race, with Burgoyne rounding off the top three.

The Superstox were the 5th and final formula in action. Bryan Forrest was in excellent form as he raced to a hat trick of race wins – enough points to secure the track championship yet again! Dean Johnston took away a hat trick of 2nd place finishes for his efforts. 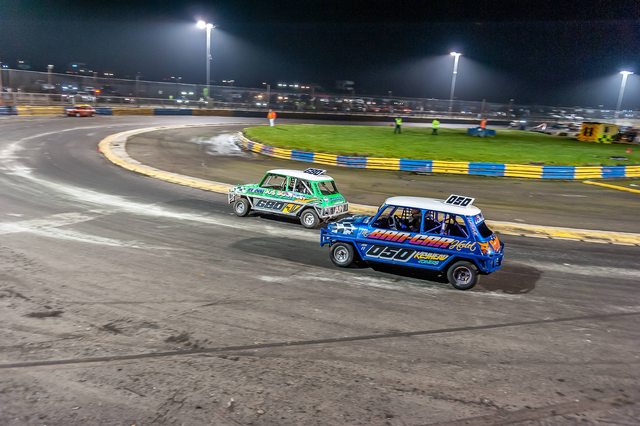