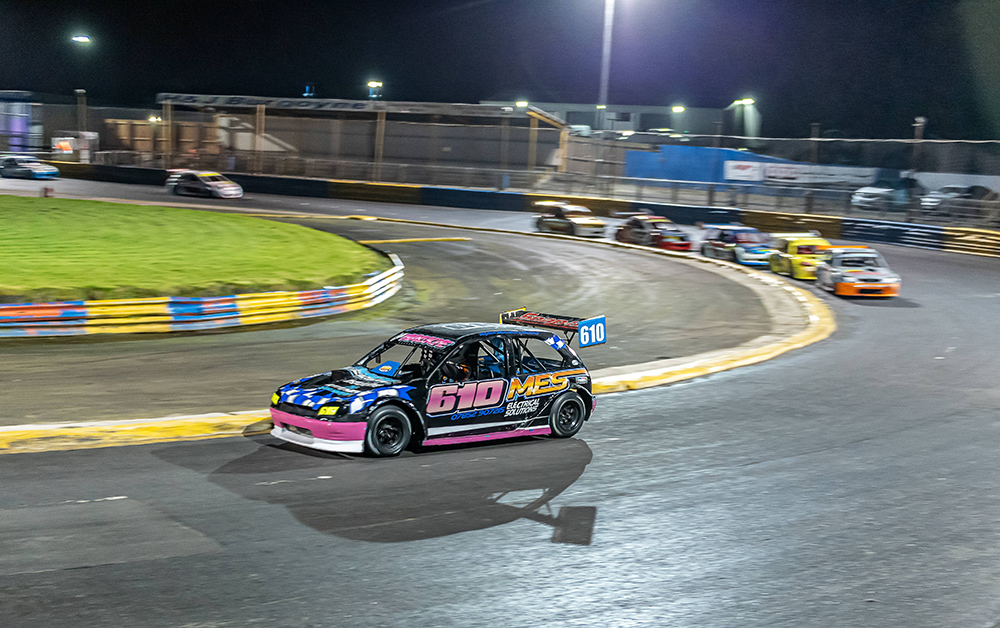 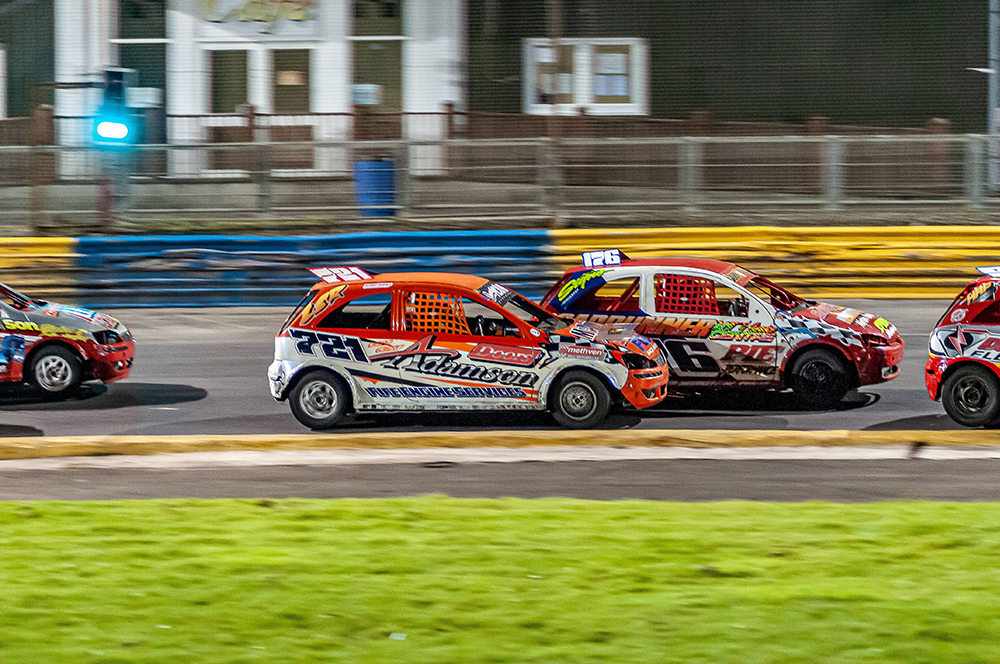 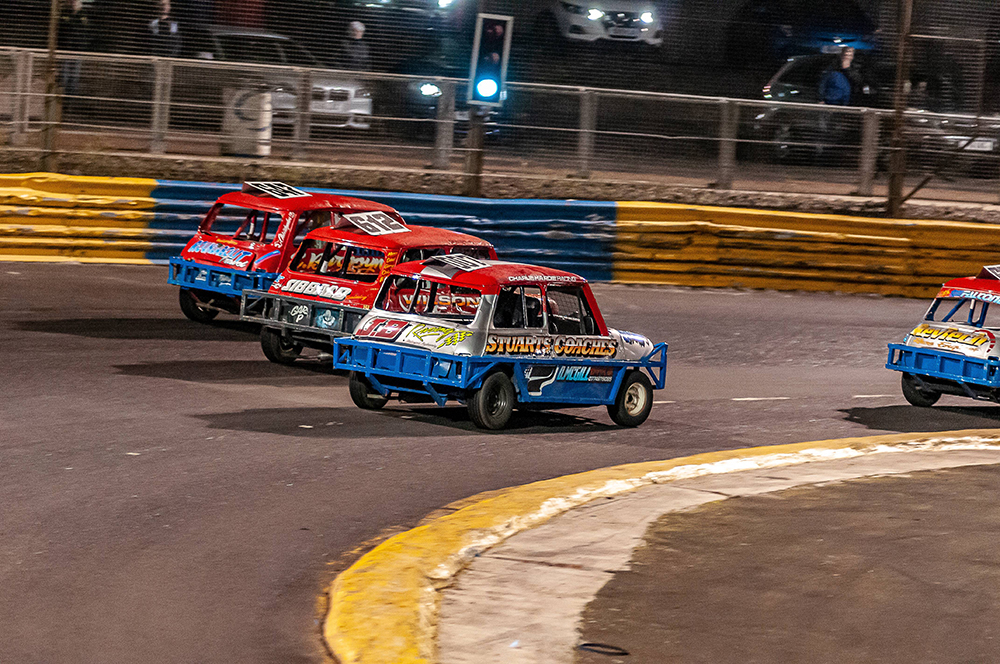 It was double Scottish Championship fever on Saturday night at Lochgelly Raceway, with the Ninja Karts and 2.0 Hot Rods battling it out for their respective championships, with both formula destined to see a new champion with the holders not defending.

The 2.0 Hot Rods have been providing some excellent racing of late, and with 2 reverse grid heats determining the grid for the main race, it was open opportunity to anyone of the drivers in attendance. Track Championship points leader Kevin Stewart took the opening race win ahead of Gerry Hendry and Marc Honeyman, whilst Ryan Mackie took heat 2, with Jock Campbell and Scott Devine completing the top 3. With the grid formed, it was Campbell and Mackie occupying the front row. Mackie got away well and opened up a lead of a few car lengths on the opening lap. However, as the pack behind jostled for position, a yellow flag and complete restart was called for with cars spinning out and colliding with each other; Marc Honeyman coming off worst with some damage, whilst Kevin Stewart also failed to make the restart. As the grid reformed, the nerves built up, and again, it was Mackie who got away first, putting in some hot laps to open up a gap to Campbell behind. Campbell was under intense pressure from Gerry Hendry and Scott Devine as he battled to hold onto 2nd place, whilst maintaining within distance of Mackie out in front. As the laps wound down, Devine dropped back from the battle for 2nd place, with the 2nd and 3rd place drivers beginning to close up on Mackie up front, who had seemingly pushed a tad too hard in the early stages of the race and his tyres going off. With only a few laps remaining, Mackie who had led from the outset, was soon under severe pressure, with Campbell and Hendry both pushing from behind. As the cars entered the final corner for the final time, Campbell and Mackie had a coming together which seen the front three cars cross the line at almost the same time, though Mackie somehow managed to hold on for the win despite finishing up on the infield alongside Campbell!!

The Ninja Kart Scottish Championship was run in a similar fashion, with two reverse grid heats determining the grid for the Scottish Championship title. The opening race though, seen an extra race for the Whites and Yellow graded drivers, which was won by Leeland Dearn. The first main heat of the night seen Kenzie Bell soar to victory, finishing just ahead of Aiden Duffy and Keiran Hay. Heat 2 of the night seen Lewis Duffy take his first victory of the season, with Kal Wotherspoon finishing 2nd after almost missing out on the race with a loose wheel on the entrance to the track, and Kenzie Bell coming through the field to finish in 3rd. Kenzie Bell found himself on Pole Position for the Scottish Championship race as a result of his positions in the 2 qualifying heats. As the race got underway, a couple of incidents in the early stages seen 2 complete restarts called for, and ultimately seen Hamish Plenderleith take the lead at the front of the pack, opening up a substantial lead in the process. Behind him, Kenzie Bell, Keiran Hay, Kaden Connor and Aiden Duffy all battled for 2nd place, with Kenzie Kopacz doing his utmost to join in. With around 7 laps to go, another yellow flag was called for with karts spun around; This closed the pack up and wiped out the lead of Hamish Plenderleith. Hamish was soon under pressure from Keiran Hay on the restart, with Hay briefly taking the lead before being overcome by Plenderleith again. Kaden Connor, Kenzie Kopacz and Kenzie Bell were all still right up there battling it out. As the laps wound down, back markers were caught up, and as the lead pack, Plenderleith, Connor, and Kopacz all went to overtake, the back markers also made a move on each other, with Cameron Mason moving to the outside of Katie-Lee Smart – this resulted in 5 abreast going into turn 3 with just 2 laps remaining! The karts came together which seen Plenderleith becoming stuck with Katie Lee Smart, whilst Cameron Mason was also spun around, resulting in another yellow flag stoppage. This time, it was Kaden Connor who led the way, from Kenzie Kopacz. Connor got away well, however, Kopacz had closed in with just a lap to go, and managed to overtake the Kaden Connor kart on the last lap to take the lead, and the 2020 Scottish Championship in what was a remarkable race! Connor finished 2nd, with Hay completing the top 3!

The Stock Rods were in action for the first time since the Scottish Championship at the end of September; Chris Lattka showed off the saltire for the first time, whilst Samuel Pate made his debut. Jim Pitcaithly looked to have finally found some form, taking his car to a heat win in the opening race of the night, whilst David Crichton finished just behind in 2nd place with Darren McAlpine in 3rd. Heat 2 of the night seen Gary Nicholls take the flag, holding onto the win over heat 1 winner, Jim Pitcaithly. Darren McAlpine again finished in 3rd position. The final seen an excellent battle for the lead of the race, with Pitcaithly starting on pole position. Pitcaithly took the win ultimately, but was under pressure for the duration of the race, with McALpine and World Champion Derek McMillan challenging from the early stages of the race. McMillan took 2nd place ahead of McAlpine.

The Ministox were the fourth and final formula in action, and with 3 different winners in differing track conditions. Charlie Hardie continued his excellent form as he took the opening race of the night in dry conditions, whilst Max Walker took the win in heat 2 in damp greasy conditions. Robbie Armit took the meeting final win in the borrowed Hardie car, whilst Hardie himself finished 2nd with Koddi Wright in 3rd.

We are back in action this Saturday at Lochgelly Raceway, with tickets onsale via our website for drive in viewing only.