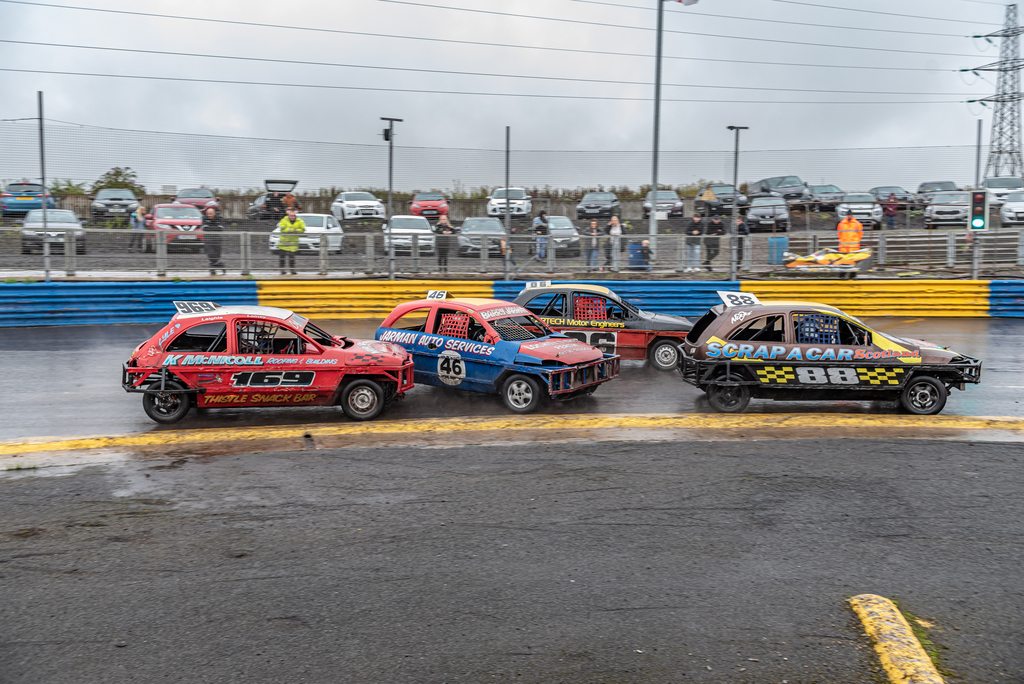 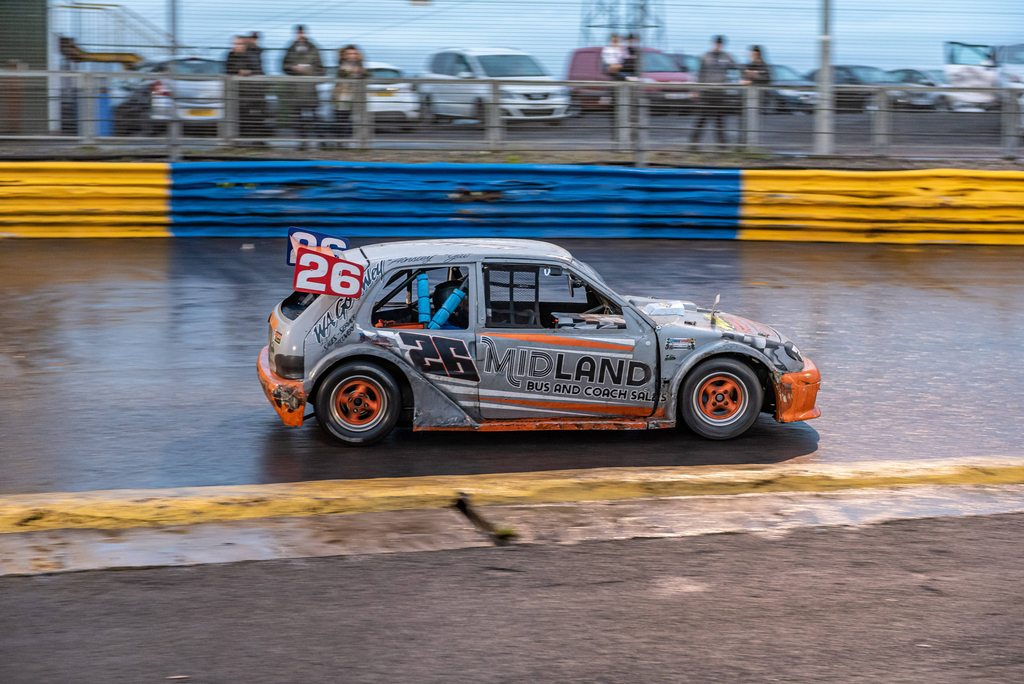 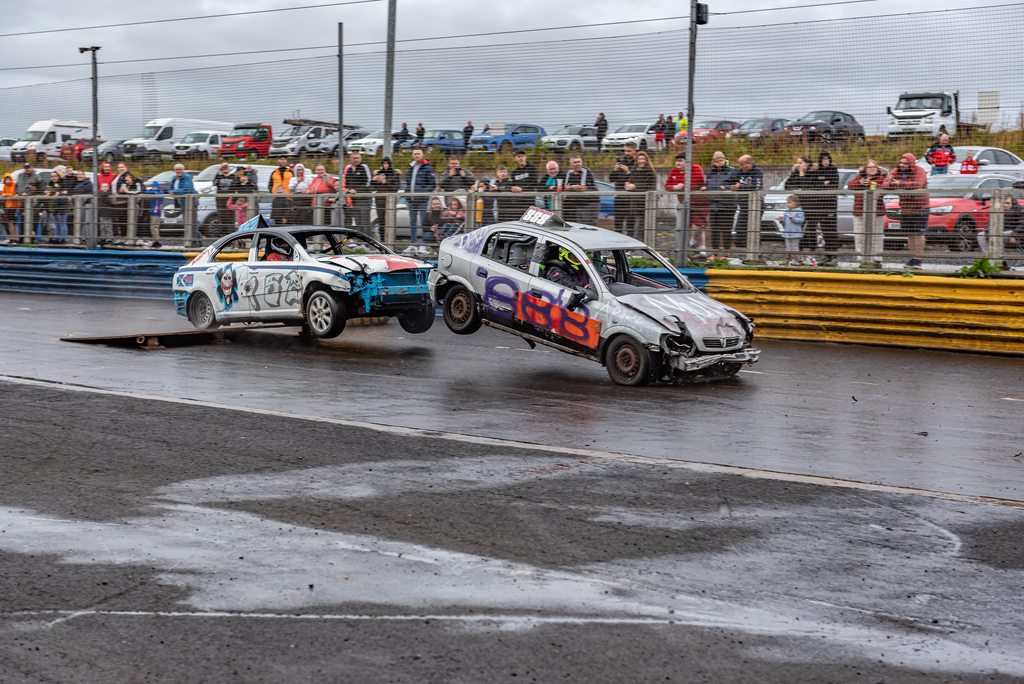 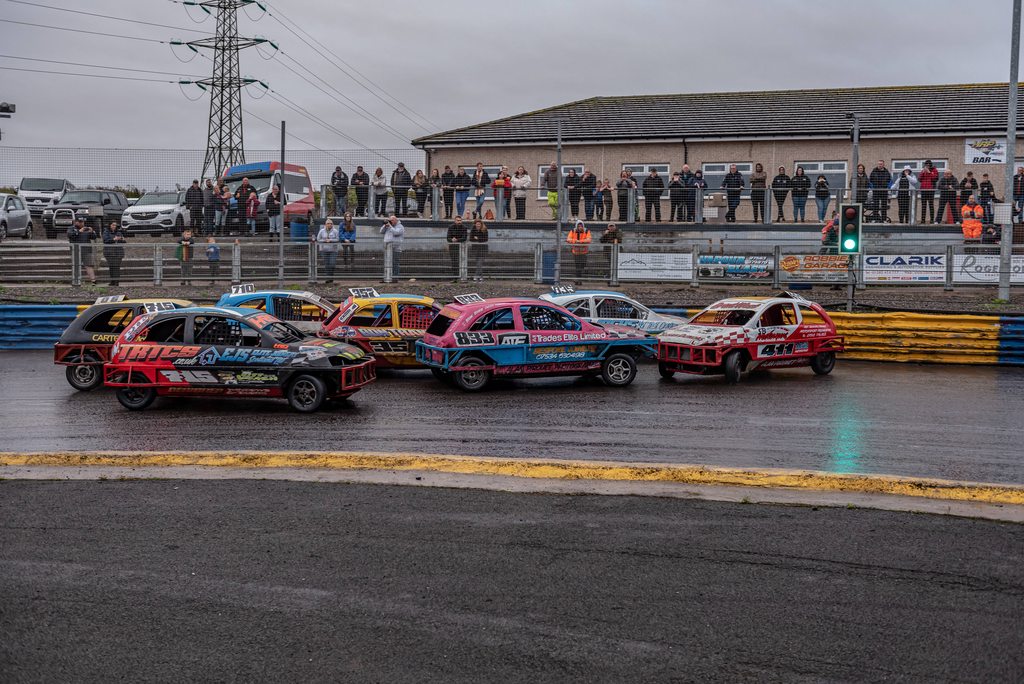 An action packed night at Lochgelly Raceway wowed the crowds with some super racing and banger action throughout the evening on Saturday 21st August.

The Back 2 Basics Bangers contested their Scottish Championship with around 20 cars in action. As the green flag dropped, the action started and several cars didn’t complete a lap! Jim Dillon won the title in 2020, and went onto retain the title this year, leading home James Dillon and Sean Tierney in the 2021 Scottish Championship race. The action wasn’t finished for the Back 2 Basic Bangers though, with the following races seeing a fans favourite ramp placed across the track! The first of the two ramp races was nothing short of spectacular, with cars launching over the ramp, lap after lap, and at one point, waving each other in as a train formed in the ‘landing’ zone of the ramp, much to the crowds delight! Lexi Noble was the driver to beat in the ramp races – winning both of the races before Gary Doyle claimed a Demolition Derby win! The ‘Team Joker’ drivers were all worthy entertainers with their entertaining style of driving throughout the night!

The 1300 Stock Cars were in action for the final time ahead of their World Championship here at Lochgelly Raceway on the 4th and 5th September, battling it out for the Craig McNicoll Memorial, and the final qualifying positions that will determine their starting slots at the World Final! With only a handful of points separating Kyle Hegg and Fraser Clark at the top of the charts, everything was still to play for, and we were left wondering how this battle would develop throughout the course of the night. Callum Sturrock, who has shown some good pace since joining the 1300 Stock Car ranks, finally got his well deserved first win, storming clear of the field of cars, whilst the others battled it out behind him on a damp greasy track. Patrick Calderwood has found good speed of late, and will be relishing the opportunity to race at the upcoming World Final event, and brought his car home in 2nd place in the first race of the night. Former Ministox driver Mitch Gold continued his good run of form in the 1300 Stock Car class, as he added yet another race win to his tally, and will stand a good chance of qualifying through the last chance race for the World Championship having missed out on a direct entry into it. Kyle Hegg and Fraser Clark completed 2nd and 3rd places in the 2nd heat of the night, finishing behind the Mitch Gold car – and there was still all to play for going into he Craig McNicoll Memorial Final. A closed grid final would see the pack bunched up resulting in an excellent race from start to finish – there were cars spinning around, hitting each other and yellow flags! Scott Lindsell was driving his race of the season in his quest to win the Memorial Race, and battled gallantly right up until the chequered flag. Patrick Calderwood, Kyle Hegg, Fraser Clark, and Lindsell himself had a super battle for the closing 5 or 6 laps with each of them leading the race at some point. Graham Osborne wasn’t far behind, lurking and waiting for a chance to pounce. A last lap effort from Fraser Clark wouldn’t be enough to overcome the Calderwood car in front, but it did allow Kyle Hegg to pip him across the line as Hegg snuck up the inside and crossed the line only 0.044 seconds ahead of Clark! However, Hegg would see his 2nd place finish taken away having been guilty of a jump start on one of the restarts resulting in a 4 place docking. A delighted Calderwood would take the win, with Clark 2nd and Lindsell 3rd!! The National Points Championship was close – very close – with only 2 points separating Hegg from Clark after his docking in the final, but he had done enough to claim the silver roof for the year ahead!

The 2.0 Hot Rods were in action, though had a couple of cars missing for a number of reasons, but the cars in attendance did their best to put on a showing, with Jock Campbell showing his experience as he drove to a heat and final double, only being beater on the recently returned Gary Black in the opening race of the night. Cameron Willacy and Jason Secker both showed good pace, and a steady racecraft as both driver navigated a difficult surface to take away good haul of points.

The ProStocks provided some entertaining, and possibly over the edge racing, with a few drivers seemingly out to settle a few scores from previous meetings!! Grady Ross and Tam Melrose were the two drivers who looked to have the bit between their teeth throughout the night, with both drivers in contention for each of the 3 races – in the end, winning 1 each, with Robert Conway taking a heat win. Jake Mason and David Russell had a coming together in the opening race of the night, with Russell spinning around on the bottom bend, and Mason pushing him around the corner, though it was Mason that picked up some damage which meant he missed out on heat 2. The meeting final see John Mason and David Russell come to blows as well, with Russell catching the passing Mason car going onto the home straight, and almost spinning Mason the wrong way around. Mason managed to hold on though, and caught the ailing Russell car on the back straight, giving him a good hard hit and a push towards the wall. Russell clattered the wall, and bounced back out into the path of Mason again causing a further impact, with the Russell car leaving track somewhat worse for wear!!

We are back at Lochgelly Raceway this Saturday night, as the Stock Rods battle it out for their 2021 Scottish Championship – defended by Chris Lattka!