An Epic Weekend of Racing

An Epic Weekend of Racing 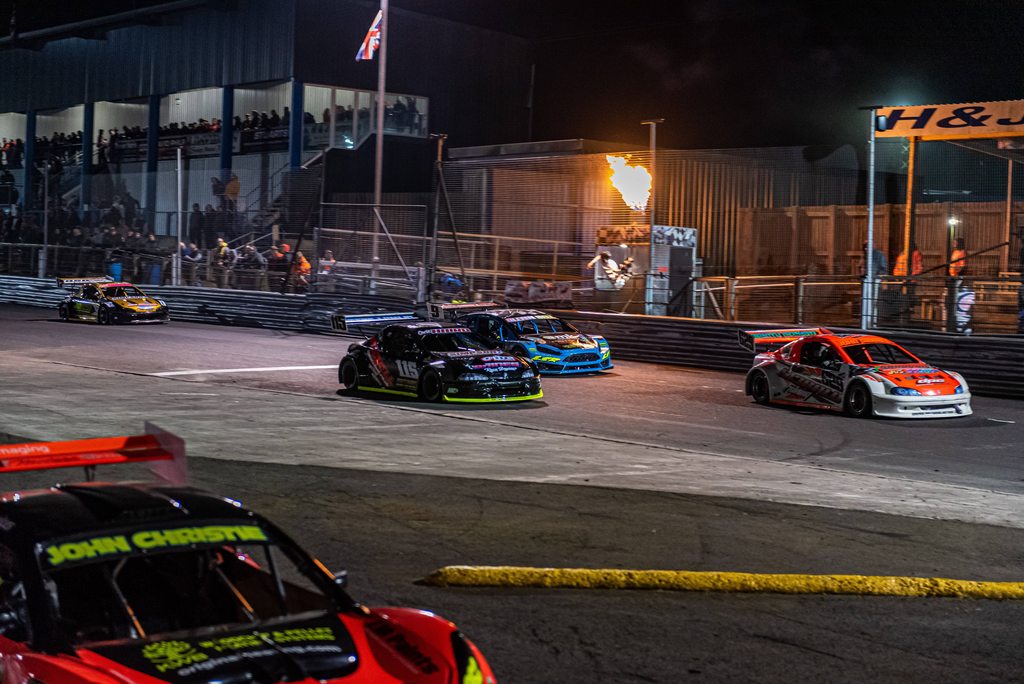 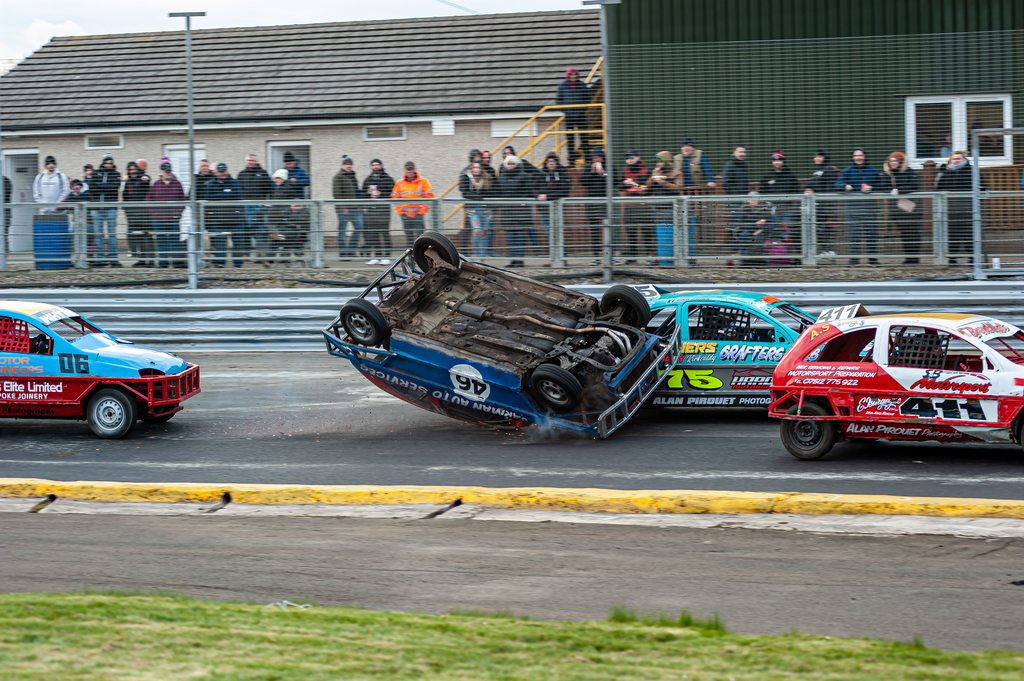 What a fantastic two days of racing that was!

A cold, but mostly dry weekend allowed for some very fast, and very close racing from all formula, and in particular, the National Hot Rods, who contested the for the David Philp Commercials European Championship.

Over 30 National Hot Rods contested over the 2 days, with the Saturday seeing the major title contested for. British Champion, Glenn Bell, would make the perfect start to the weekend as he raced clear in the opening heat of the weekend to claim the first victory of the weekend, and put a marker down for those around him. Scotsmen, John Sibbald and Ross McWilliam would complete the top 3 in what was a good result for the Scottish drivers. Heat 2 would see fellow Northern Irish driver, and reigning European Champion, Shane Murray take victory, with two former European Champions in 2nd and 3rd, namely Adam Hylands and Carl Waller-Barrett. Derek Martin, yet another Northern Irish driver would take the third and final qualifying heat, with another 2 former European Champions rounding out the top 3, Chris Haird and Jason Kew! The points were calculated from each of the three qualifying heats to give the grid for the DPC European Championship race. Great work by the team in the pits would see the cars pushed out onto track in grid order as they completed a much deserved parade lap. Adam Hylands and Derek Martin would start the race on the front row of the grid, with Haird, and Bell completing the second row of the grid. Three installation laps would proceed the race, followed by 2 rolling laps, which would see the temperature rise in the stadium as nerves rose, and feet tapped the floor in anticipation. As the green flag dropped, the front two got away evenly, before tangling with each other, resulting in Martin going for a spin as he exited turn 2, and also taking Hylands into a spin as well as the cars exited the corner together. The unfortunate Chris Haird would be caught up as well, whilst Glenn Bell took the opportunity to move into the lead of the race, and would never look to be challenged. Gordon Alexander found himself sitting in second place for much of the race, holding off from Carl Waller-Barrett and the pack behind. Robert McDonald would be making rapid progress from further back the grid, and seemed to get quicker as the race progressed. He would find himself up into 4th place, and found his way passed Waller-Barrett, before challenging fellow Scottish driver, Gordon Alexander for 2nd position. A small tap on the back bumper of the 71 car was enough to unsettle him and open up a gap enabling him to move into second place, whilst Alexander was also passed by Waller-Barrett at the same time. McDonald would do his utmost to chase down the leading Bell car out front, and closed the gap considerably in the closing stages, but the laps would run out too quickly before he was able to put a challenge in onto the number 9 car. Bell would cross the line first, with McDonald 2nd, Waller-Barrett 3rd and Alexander 4th, with current champion, Shane Murray in 5th place. McDonald was deemed to have made a gap though when passing the 71 car and was as such docked a couple of place as a result. Bell would subsequently lose the title following post race checks, which would see Waller-Barrett crowned European Champion for the third time, although, Bell looks set to appeal the decision. Sunday afternoon would see just under 30 Nationals compete in the opening race of the day, though, this race seen a few cars pick up some damage and mechanical issues that would see the numbers fall away in the latter races, before a shower of rain hampered things in the closing stages of the day. Southern Irish driver Dave Casey was quick all weekend, and picked up a heat win on the Sunday, before claiming the Scottish Open / Malcolm Chesher Memorial race on a damp track. Northern Irish driver Jeff Riordan also picked up a race win in the heats, with Robert McDonald finishing 2nd in both of the reverse grid heats.

The Classic Hot Rods are always a joy to watch, with the retro style cars showing off their looks, and provide some great racing as well. The Classics would be contesting their Scottish Open on the Saturday, and Malcolm Chesher Memorial on the Sunday, with the Scottish Open being sponsored by Spedeworth TV. Southern Irish driver, Anthony Morgan looked the quickest on Saturday night, as he claimed a heat win in the opening race of the weekend for the formula, before picking up the Scottish Open later in the evening. There would be debut’s for Davie Low and John Buchan in the formula, with both drivers turning out impeccable looking cars, with Buchan looking quick all weekend. Andy Steward was one of the later bookings as he managed to get his car ready for the weekend, but would be wishing he stayed away given his weekend was over in the first race of the day after some serious engine issues. Graeme Callendar picked up a heat win in the second heat of the day, whilst Gary Goodswen and Mark Monaghan would complete the top three in the Scottish Open behind winner Anthony Morgan. The Sunday would see a few less cars on track, however, the Classics provided some good racing as is always the case with the formula. Drivers showed respect to each other, and gave the fans something to watch, with many of today’s crowd, not having seen these cars race in there hay-day. Morgan would take the opening win of the Sunday afternoon, with Dan Buckley taking a heat win as well, before John Buchan claimed the Malcolm Chesher Memorial in the final race of the weekend for the formula. Morgan and Goodswen would complete the top three, with Keith Chesher just missing out on a podium place, but was on hand to present the trophy to the drivers.

The Stock Rods welcomed a couple of visitors from across the water in the shape of Hannagh Monaghan and Evan Monaghan. The two heats plus the final on Saturday, would see points allocated, and then combined with the two heats on the Sunday, to form the grid for the Lochgelly Masters on the Sunday afternoon. Chris Lattka was in great form across the weekend, picking up a strong haul of points, and perhaps one of his best all round performances for a year or two. Niall McFerran continued his impressive run of results in the formula, as he picked up another race win on the Saturday evening, before Evan Monaghan would take a win in the second heat of the day. The meeting final started as points within grades on the Saturday, and the lower graded drivers took some catching, with great performances from Evan Monaghan, Allan Hamilton and Robbie Hamilton. Chris Lattka would be the first, and only star graded driver to overcome this trio on track, with Hamilton crossing the line in 2nd place, ahead of Monaghan and Hamilton. Hamilton would find himself demoted a couple of places for some contact early in the race, promoting the following drivers up a place. A great battle for the minor places would see Gary Dean battle it out with McFerran, Stewart Paterson, Jamie Stewart, Darren McAlpine and David Cricthon for much of the race. The Sunday afternoon seen some more great racing, with some temperatures rising though as some drivers found a disliking to each other!! Chris Lattka though, would take a heat win with David Crichton also taking a heat win on the day. The Lochgelly Masters would be up for grabs in the meeting final, with Lattka and McFerran starting on the front row. McFerran would get away first and found himself open up a decent lead in the race, with Lattka and Martin battling it out for 2nd place a little further back. Siobhan Martin would manage to put a move on the Lattka car to move into 2nd place and chase down McFerran up front, however, a slow moving 46 car would do her a massive favour as it swept across the track and took out the leader of the race. Martin would then take the race win ahead of Lattka, and Gary Dean completing the top three.

The Ministox provided non-stop action throughout the two days, with lots of talking points over the weekend! A fierce battle for the points championships looks to be underway, with Hardie, Wilson and Armit all trading blows on a regular basis as they looked to outscore each other at every opportunity. Hardie would be the one that lost out most though over the two days, having seen himself come away with only 2 top 10 finishes from 6 races. Hardie started off well though, as he took a race win in the first race of the weekend on Saturday night, with Jake Wilson and Jamie Dawson finishing behind. There was some strong performances from our lower graded drivers, notably Hamish Plenderleith and Cole Ford, with Plenderleith narrowly missing out on his first race win on Saturday night, having been spun around by Robbie Armit on the exit of the last corner of the meeting final! Wilson would take a race win, in the second heat, whilst Armit would himself take the win in the meeting final. Austin Farrell, a welcome visitor from the south west of England had a great weekend, picking up several great positions across the two days of racing, including a runners up spot in the final on Saturday night. Dean Heeps picked up a third place in the final on Saturday too – one of his best results at Lochgelly Raceway to date. The Sunday seen much of the same, with Hardie, Wilson, Armit and Allardyce exchanging blows throughout the day. Three different winners on the Sunday seen Armit take the opening race, Jamie Dawson the second heat, with Rachel Kidd taking the meeting final. Rian Mitchell made the most of the battles around him, as he managed to steer away from trouble to take a well deserved second place in the final race of the weekend for the youngsters.

The 1300 Stock Cars were the final formula in action, with over 20 cars competing over the two days. The 1300 Stock Cars provided a rare ‘support’ role given how they have been one of the stand out formula in 2022. Danny Whyte was in brilliant form all weekend – perhaps the best form he has shown in the formula, as he swept to 4 race wins out of 6 across the 2 days. A big rollover for Barry Jarman on the Saturday night seen his car somersault on turns 1 and 2, before reversing back onto the back straight, and collected by an oncoming car! Saturday night only seen 2 races for the formula due to time constraints, though the missed race would be carried over into the Sunday. Fraser Clark had another strong weekend as he took another race win, and another good haul of points, whilst Kyle Hegg seemingly struggled for pace at times, yet managed to grind out some good results, with some crafty bumperwork, most notably in the final race of the weekend where he went in for a mega last lap lunge which sent cars all directions, though found himself facing the wrong way as he approached the finish line. Brant West would take a much deserved race win, with Clark finishing second, and Martin McCaffery coming through to complete the podium places.

We’d like to thank those that contributed over the weekend, and joined us for what were two hugely enjoyable days of racing!!