Kingsnorth at the Double

Kingsnorth at the Double 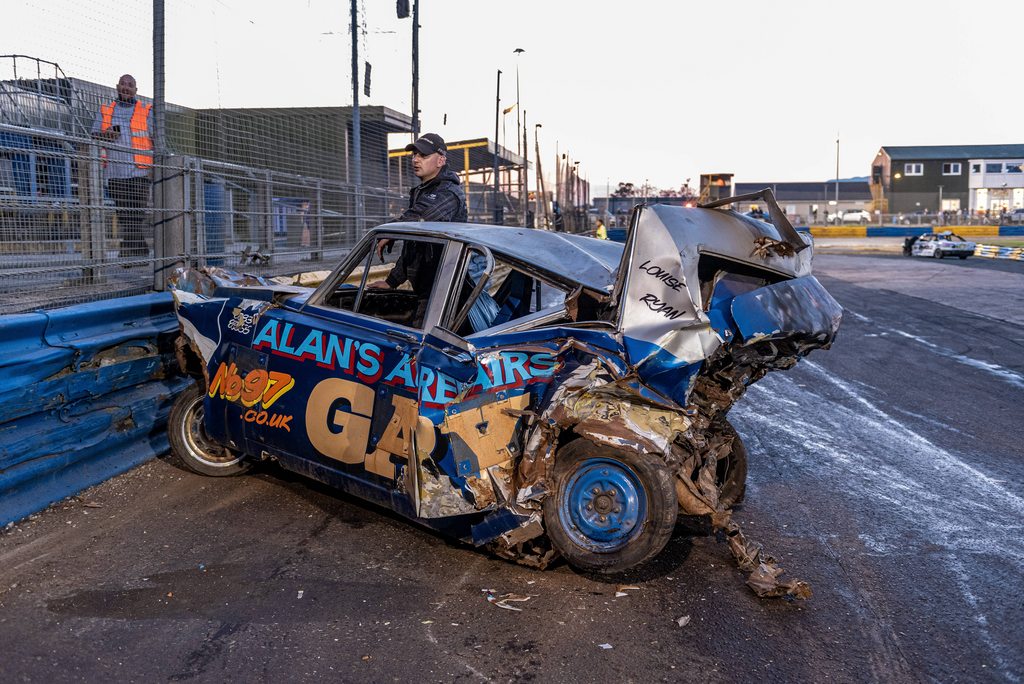 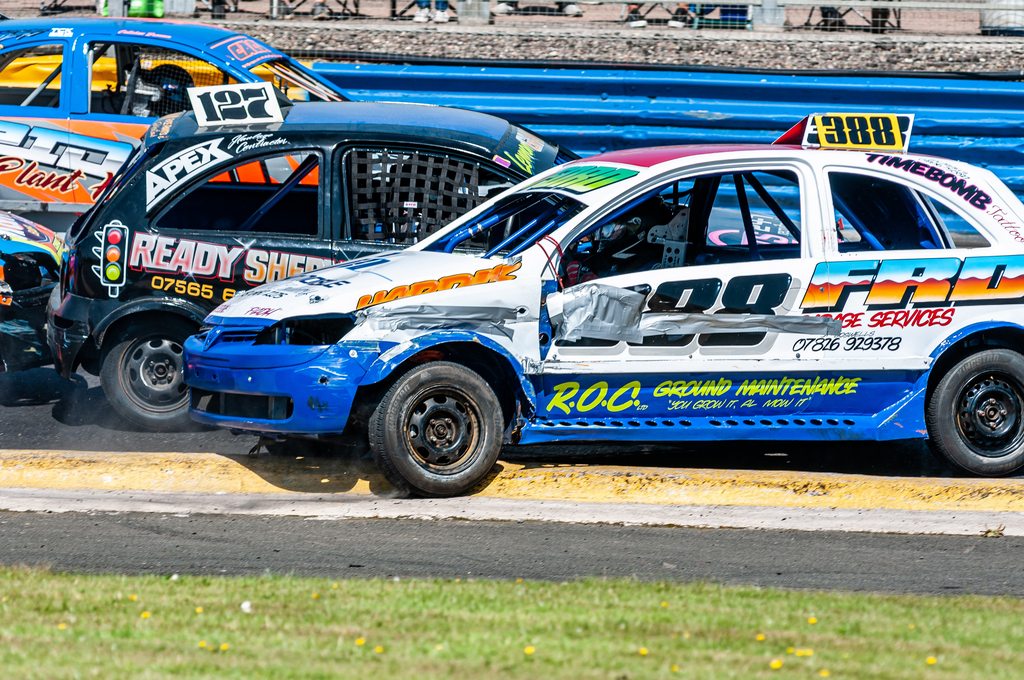 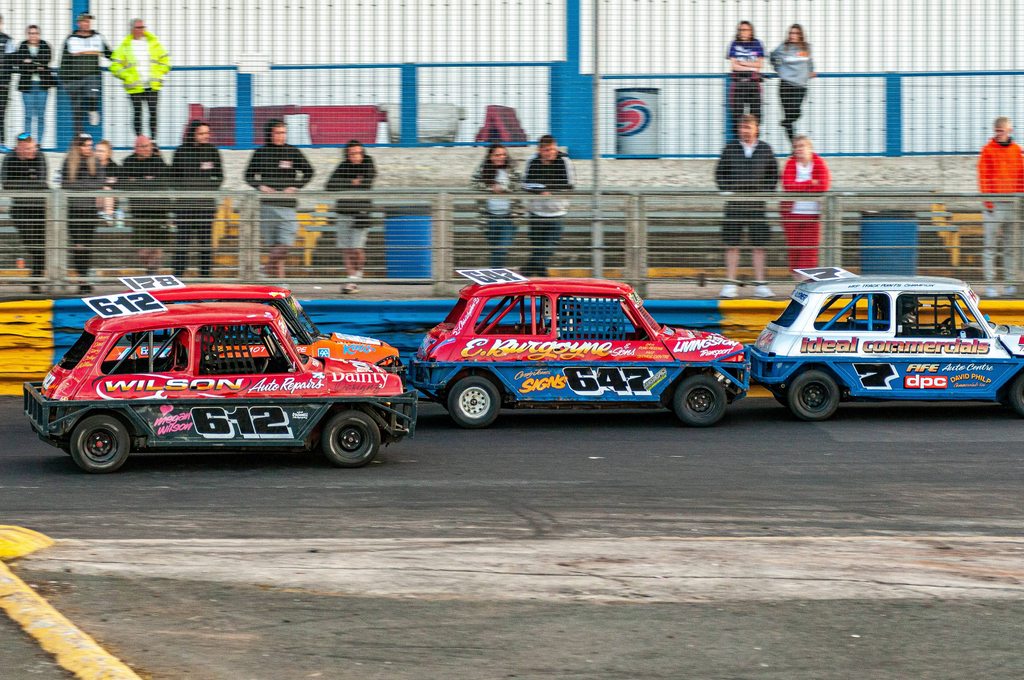 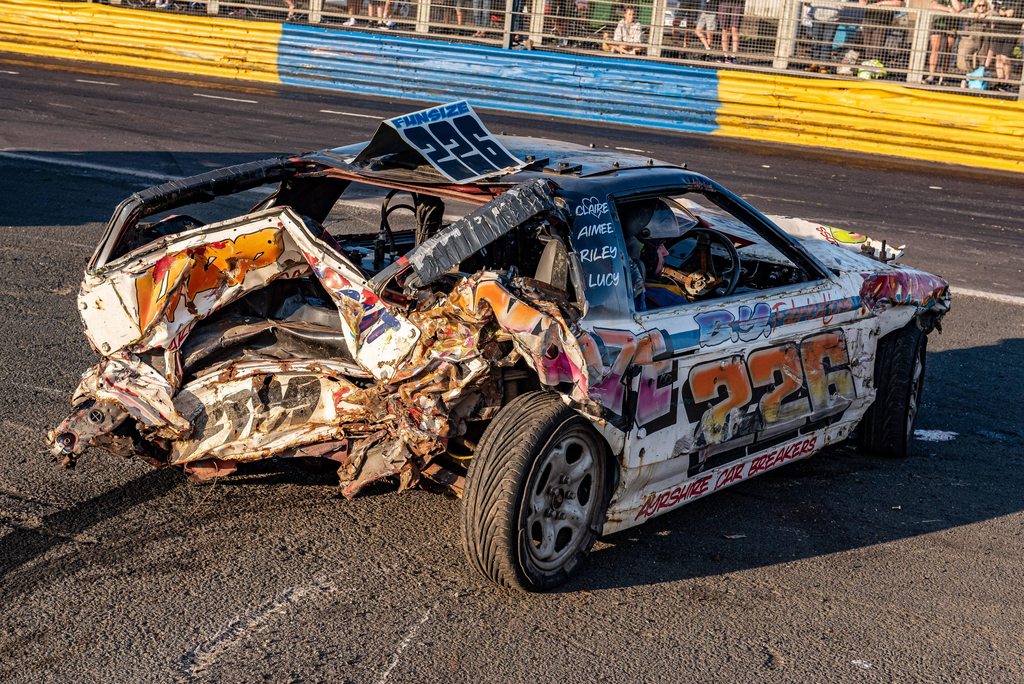 The Bangers rocked into Lochgelly Raceway at the weekend in record numbers as we celebrated the 10(+1) year of the track operating! Hotel rooms were filled with Banger teams, and fans from around the UK and Ireland as dozens flocked to the venue across the weekend to witness just shy of 40 races across the 2 days.

The Unlimited Bangers seen just under 30 cars take to the track on Saturday evening, whilst the Rookie Bangers seen around 60 cars on track on Sunday afternoon, with both variations providing some super entertainment throughout the weekend. 30 Unlimited Bangers is the best turnout that the track has seen, with the previous record being in the low 20s. Unlimited Bangers are the biggest of all variations of banger, with some serious money ploughed into some of the cars. We were proud to host the event, which also boasted the attendance of the National Unlimited Banger World Champion, as well as a couple of other major title holders and former champions!

Saturday afternoon kicked off proceedings with a number of low key events that would give some of the other formula an opportunity for some track time and race in front of a larger crowd, on a busy weekend. The Ninja Karts took to the track with just over 20 karts participating on the day, though numbers dropped during the afternoon as some drivers picked up damage and unable to make it back out for the remaining races. As usual, the Ninja Karts started off with a whites and yellows race to give some of the lesser experienced drivers an opportunity to build their confidence – Jack Connor took the race win ahead of Saul Galloway and Cameron Mason. Kenzie Bell was in excellent form on the day as he took 2 race wins before being put off the track in the final race for passing the pace car much to his disappointment. Candice Smart brought the checkered flag down on her Ninja Kart career with a 2nd place finish in one of the heats, before she moves on into the Junior Productions in the next year all going to plan! Hamish Plenderleith, who has been one of the quickest drivers over the last 12 months, didn’t have much joy in the first of his 2 races, but went onto take a win in the 3rd race of the day for him – the final race of the afternoon for the youngsters. Stuart Shevill Jnr continues to improve, and walked away with a couple of third place finishes on the day, his first podiums since moving up to blue grade.

The Junior Productions had a strong field of cars in action – just shy of 20 cars taking to the track on the day – the highest turn out in several meetings. Three different race winners on the day highlights the strength, and upcoming quality in the field of youngsters. A first win for Chloe Baird in the opening race of the night went down even better, with brother Jack also scoring in the top three for the first time in the formula. Jase Walle extended his lead at the top of the points charts with another race win and consistent set of results with closest challenger Jensen Bell failing to finish in one of his races hampering his challenge. Lennon Grant showed his presence on Saturday as he took the meeting final win. Lennon often flies under the radar, but has no shortage of ability as he has shown in the last couple of meetings with consistently good results. The original running of heat 2 though, had to be abandoned due to an incident on track resulting in medical attention being required for Kaitlyn Smart, though thankfully, she managed to climb out of the car and walk away after being looked after by the medics for a while.

30 1300 Stock Cars again took to the track as the bumper brigade continued to impress. Callum McIvor, Blair Robertson and Dale Robertson all made their debuts, whilst Kyle Hegg also brought out a new car. Blair Robertson thought he had got off to a perfect start, crossing the line first in the opening race before being penalised for jumping the start, promoting Darren Rae into 1st place. Kyle Hegg will have been impressed with his car out of the blocks, as he raced to a 2nd place finish in the opening race and a 3rd in the meeting final, coming from the back of the grid to do so. Callum Barclay – who is the in-form driver at the moment, took another race win in heat 2, and was unfortunate to have the meeting final taken away from him as well as he looks to put a fight on for the track championship, having missed a few meetings early in the season. The 1300 Stock Cars provided plenty of action throughout the day / night, with lots of pushing and shuving going on in each of the three races.

The Stock Rods welcomed Lauren Overy to the track, a visiting driver travelling north with some of the banger visitors. Stewart Paterson put up a defensive drive in each of the 2 heats as he held off the pack behind him, to take a double heat win – though was perhaps a tad fortunate in heat 2 as Jim Pitcaithly was unfortunate not to make it round the outside of him having been caught up with a back marker driver that hampered his run. The meeting final seen Siobhan Martin go for a spin in the first lap having tried to squeeze up the inside of Stewart Paterson, who held his ground and didn’t concede resulting in the 25 car spinning around and being collected by the oncoming pack – thankfully not causing too much damage with all cars able to drive away. Pitcaithly took full advantage of the coming together as he crept up the inside and race to an excellent final win, with Paterson nursing his car home to 2nd place, with Gary Dean and the pack hot on his heels!

The Unlimited Bangers were the star attraction and put on an epic showing on Saturday night. Some of the sports biggest names made their way north to be with us, including Jack Overy, Lee Kingsnorth, Micky Maskell, Sid Madgwick, Bradley Tomlinson and Tom Waller, as well as a few of Northern Irelands top drivers. The Scottish Championship was the one that they all raced for, with Lee Kingsnorth being the driver that would come out in first position. Tom Waller and Scotsman Scott Paterson would round out the top 3, in what was a superb race with action from start to finish! Scott Paterson and Tom Waller would go on and take the 2 all comer races, before Kingsnorth also took the DD win! Hopefully, the drivers will be back with us in 2022 as we look to host the Scottish Championship at a similar time of year next year!

The Superstox welcomed a couple of English visitors, with Dan and Charlie Santry, Declan Salmon, Bradley Brooker and Gary Chisolm joining us at the Lochgelly Masters was contested for across the 2 days. Charlie Santry got off to a perfect start as he scooped a double heat win though ran into bother in the final resulting in a DNF. Dean Johnston and Bryan Forrest had some brilliant races throughout the weekend, with the pair battling hard in each and every race – Dean had the better of the results on the Saturday, but Bryan found his groove on Sunday as he stormed to another hat-trick of race wins, taking the Lochgelly Masters on the way. Aaron Riddell debutised his brand new KMR car, and was immediately showing great pace from the back of the grid. Battling through to top 5 finishes in 5 of the 6 races across the weekend, with the car being tractored off the track in the other race!!

The Ministox also participated on each of the 2 days, with 2 different championships on offer. The Scottish Championship and Fife Championship. Saturday afternoon would see 2 reverse grid heats pulled from the hat, with the results determining the grid for the main event – the 2021 Scottish Championship. Lewis Burgoyne and Charlie Hardie had an epic battle for the best part of the race, with the 2 star drivers following each other closely. A mid race yellow flag bunched the pack up, and this would enable Scott Allardyce to close the gap on the front runners, and ultimately score an excellent third place finish from his near back of the grid starting position. Lewis Burgoyne would take the win ahead of Hardie in 2nd. Heat 2 would see the grid flipped around and Allardyce would go on to take the race win with Jay Paterson continuing his fine form at Lochgelly Raceway, finishing 2nd with Jake Wilson in 3rd position. As the heats were completed, the computer did its work and calculated the grid for the Scottish Championship race. The front row would see Allardyce and Burgoyne occupy it, with Hardie and Wilson row 2, and Jay Paterson and Ethan Gemmell on row 3. As the green flag dropped, a great race would commence – Hardie, Allardyce, Paterson and Burgoyne all traded blows, rubbed paintwork and led the pack throughout before Paterson was spun around dropping him down the order. Hardie and Allardyce opened up a small gap to the other challengers, with Allardyce overcoming Hardie with only a few laps remaining. Hardie stuck with Allardyce though, and tried to take the place back with 2 laps to go, but didn’t make enough contact and dropped back from Allardyce by too much to try again on the last lap – Allardyce crossed the line to become the 2021 Scottish Champion, with Hardie in 2nd and Burgoyne rounding out the top 3. A sterling drive from Andrew Scott would see him finish in 4th position! The Sunday afternoon seen 2 graded races take place with the final gridded on points scored within the heats. Charlie Hardie took the opening race of the afternoon, finishing ahead of Billie Dawson who found her groove on the Sunday at Lochgelly Raceway after a trip back upto Aberdeen on the Saturday night! Jake Wilson took heat 2 of the afternoon, with Allardyce finishing second. Heat 1 winner Hardie could only manage a 10th after finding himself trapped on the outside of a crash with nowhere to go. Jay Carruthers managed to score an excellent 3rd place finish in the race – possibly his best result at Lochgelly in the Ministox class. The meeting final would again see an excellent race between Charlie Hardie and Scott Allardyce – with the 2 within a car length of each other for most of the race, with Hardie pulling out a gap mid race before back markers enabled Allardyce again to close the gap in the closing stages – but not enough to put a firm hit into the Hardie car, as Hardie went onto win the Fife Championship ahead of Allardyce and Jake Wilson.

The Rookie Bangers seen around 60 cars take to the track on Sunday afternoon with some mega hits going in throughout the afternoon – five races were had for the Rookie class – enough to provide entertainment to the large Sunday crowd. The numbers didn’t really fall away neither, until the final race of the day, where we still managed around 15 cars on track and a good demolition derby as well. Lee Kingsnorth will be delighted with his weekend, having added the Rookie Banger Scottish title to his list of accomplishments at Lochgelly Raceway!

The CC Rods and 2.0 Hot Rods were also in action on Sunday afternoon, with race wins going to Dylan O’Donnell (2) and Brandon Gourlay in the CC Rods, whilst Gerry Hendry took a heat and final double in the 2.0 Hot Rods, and Jason Secker taking another race win as well.

We are back on Friday night this week – with the 1300 Stock Cars, 2.0 Hot Rods and Ministox all in action. 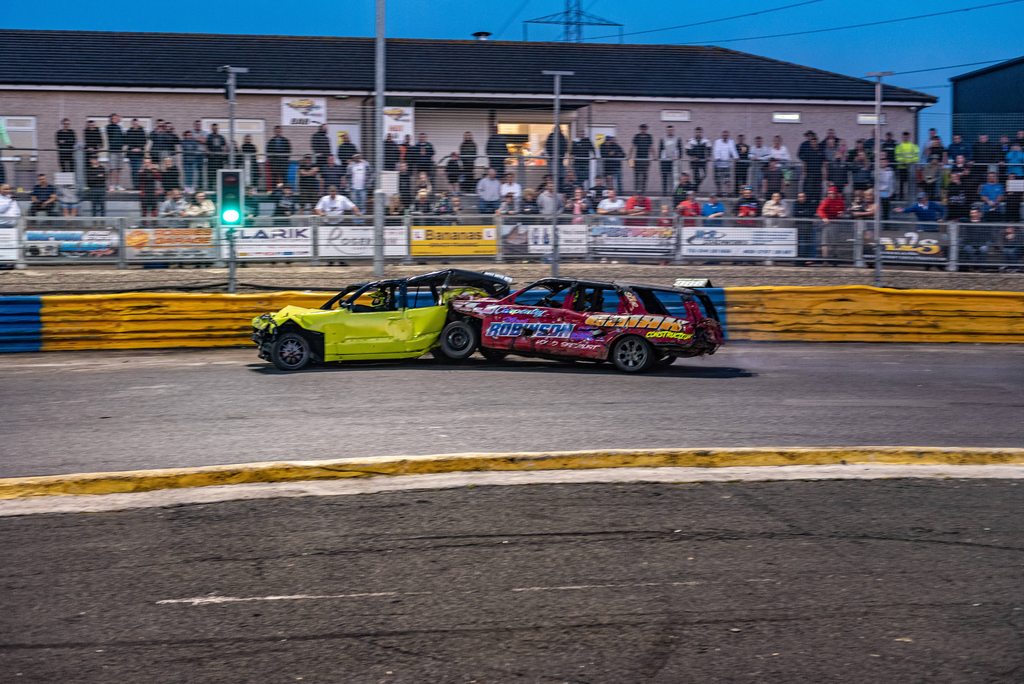