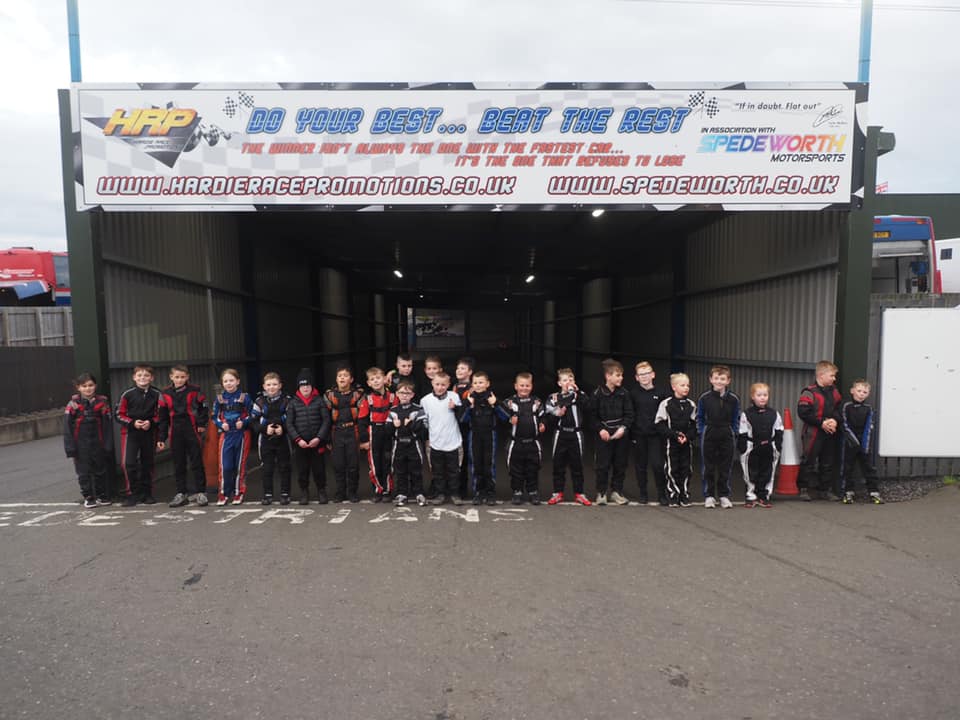 It was a fast and furious night of racing at Lochgelly Raceway on Saturday 23rd October, as we enter the last few weeks of the season (outwith the Hogmanay special event).

The Ninja Karts had the final outing of the 2021 season at HRP, and with an extra bit of sponsorship from Direct Car Autocare and M90 Autosports, there were 2 sets of tyres on offer throughout the night – a slick set of tyres going to the winner of the whites and yellows event, and a wet set of tyres going to the meeting final winner. Throughout the night the youngsters were looking to raise funds, and awareness of Autism, with funds going towards Autism Rocks (Fife). The racing kicked off with the Whites and Yellows race for the youngsters, and with a large number of newcomers over the last few months, it was a busy field of karts – with around 15 youngsters taking to the track! Louie Hendry was back with us having missed out last weekend, and drove superbly for an excellent race win, with Cameron Mason finishing behind, and Tommy Melrose completing the top three, in what was an entertaining race. With the National Points sown up, Hamish Plenderleith continued to perform and took away yet another race win on the night – winning the first of the 2 heats on the night. In form driver Jack Connor took the other heat win, before scooping his 2nd shield in 2 weeks, as he won the meeting final, taking away the M90 Autosports Shield for his efforts! To round off the evening, a celebratory lap of honour was given to the youngsters that would be graduating from the formula over the winter months. We wish them all well in their chosen path over the coming seasons!

A number of our Ninja Karts drivers headed southbound following the meeting on Saturday to participate in the English Open Championship at Aldershot Raceway. We are proud to announce that Jack Connor took the flag to win the English Championship!

The Stock Rods featured for the 2nd last time in 2021 – with 1 more meeting to go on the 6th November, and the track championship battle has gone right to the wire!! Following on from Saturday night’s action, only a few points now separate Darren McAlpine from World Champion Siobhan Martin. It was former Junior Production driver John Bremner that took the plaudits on the night though, as he swept to a double heat win, before coming together with Ian Donaldson on the opening lap of the final, dropping him down the field as a result. A healthy 17 cars attended, and provided some excellent racing as a result, with a vast amount of bumper to bumper action. Former Scottish Champion, Chris Lattka, ran into trouble in the opening race, as his car coughed and spluttered around the raceway, putting an end to any sort of challenge he had in mind on the night. Gunner would miss heat 2 as a result, but was back out for the meeting final, and started from the rear of the grid. The 658 pilot looked to be back to his best form, as he drove superbly from the rear of the field, putting in a number of hot laps in the process, and charged up through the field, only just missing out on a top 5 place for his efforts. Up front though, Siobhan Martin took full advantage of the coming together between Donaldson and Bremner on the opening lap of the final, and squeezed through and into the lead of the race – and never looked back as she stormed to yet another final win here at Lochgelly Raceway. David Crichton had a better meeting, and will go away satisfied with his results, finishing in 2nd in heat 2, whilst just missing out on a top 3 in the meeting final.

The Ministox were back with us with another strong field of cars – including a first outing of the season for Zara Hutchinson at Lochgelly. It wasn’t to be the best of nights for the Hutchinson driver though, as she found herself up onto her side in the opening laps of the meeting final, resulting in some medical assistance – We wish Zara well, and hope she makes a full and speedy recovery in due course. The battle for the Ministox track championship looks almost over, as Charlie Hardie extended his lead to 29 points over Jake Wilson, who in turn, is now only 3 points ahead of ORCi Champion, Scott Allardyce. The HRP National Points Championship looks all but over, with Charlie Hardie opening up his lead to 104 points over closest challenger Scott Allardyce, and it would take a fair amount of doing for Allardyce to close that gap up in the remaining meetings! The youngsters have been a joy to watch in 2021, as they consistently put on a show, bringing 20+ fields of cars on a regular basis! Charlie Hardie took the opening race win on the night, as he battled his way through from the Champions grade, with Rachel Kidd taking yet another race win following her return to action only a few weeks ago. Mirran Adams put in an excellent showing, and was arguably the stand out driver of the meeting, taking away a superb 3rd place finish in heat 2, and was unlucky not to match that in the other 2 races as well. The meeting final seen the Scottish Champion Scott Allardyce take the flag, with Hardie and Jamie Dawson completing the top three.

The Superstox contested their own Scottish Championship on Saturday as well, and all eyes would be on the favourites in the opening stages of the race. A pre-race grid draw would see Adam Low draw pole position for the main race. With a rolling lap start, the cars were eager to get off the mark, and as the green flag dropped, it was Low that got away first – though, that wouldn’t last too long, with the bumpers going in hard on the first lap from those further back. Dean Johnston would strike a blow on reigning champion, Bryan Forrest, which resulted in the 309 car hitting the barrier hard, causing some damage to the back bumper as a result. The 309 car limped around the raceway for a lap or 2, before retiring to the infield area, but before that, had a near coming together with the Dean Johnston car, with Johnston swerving to avoid him, and hit the infield rumble strips as a result, sending the car up into the air before re-joining the track. The Johnston car though, would not survive this, and spluttered to a halt a lap or so later. This allowed Aaron Riddell to take the lead of the race, and open up a gap to those behind. Riddell would go onto take the 2021 Scottish Championship title, with Lee Livingston and Mark Brady completing the top three. The presentations were conducted by the legendary, Bill Pullar. The following 2 heats seen Dean Johnston make amends, as he went onto win both races, with Ciaran Adams taking away an excellent 2nd place finish in the first, and Aaron Riddell taking 2nd in the other.

We are back in action at Lochgelly Raceway, this Friday night, with a fantastic 3 formula line up on the agenda – the 1300 Stock Cars will contest for the Mr Gunn Trophy, whilst the CC Rods will contest the Bill and Ciaran Hawkes Memorial shield. The Ministox are also in action, with no less than 4 English visitors due to be in attendance! First race, 7pm – Join us then!!!

For more information about our events, please visit hardieracepromotions.co.uk