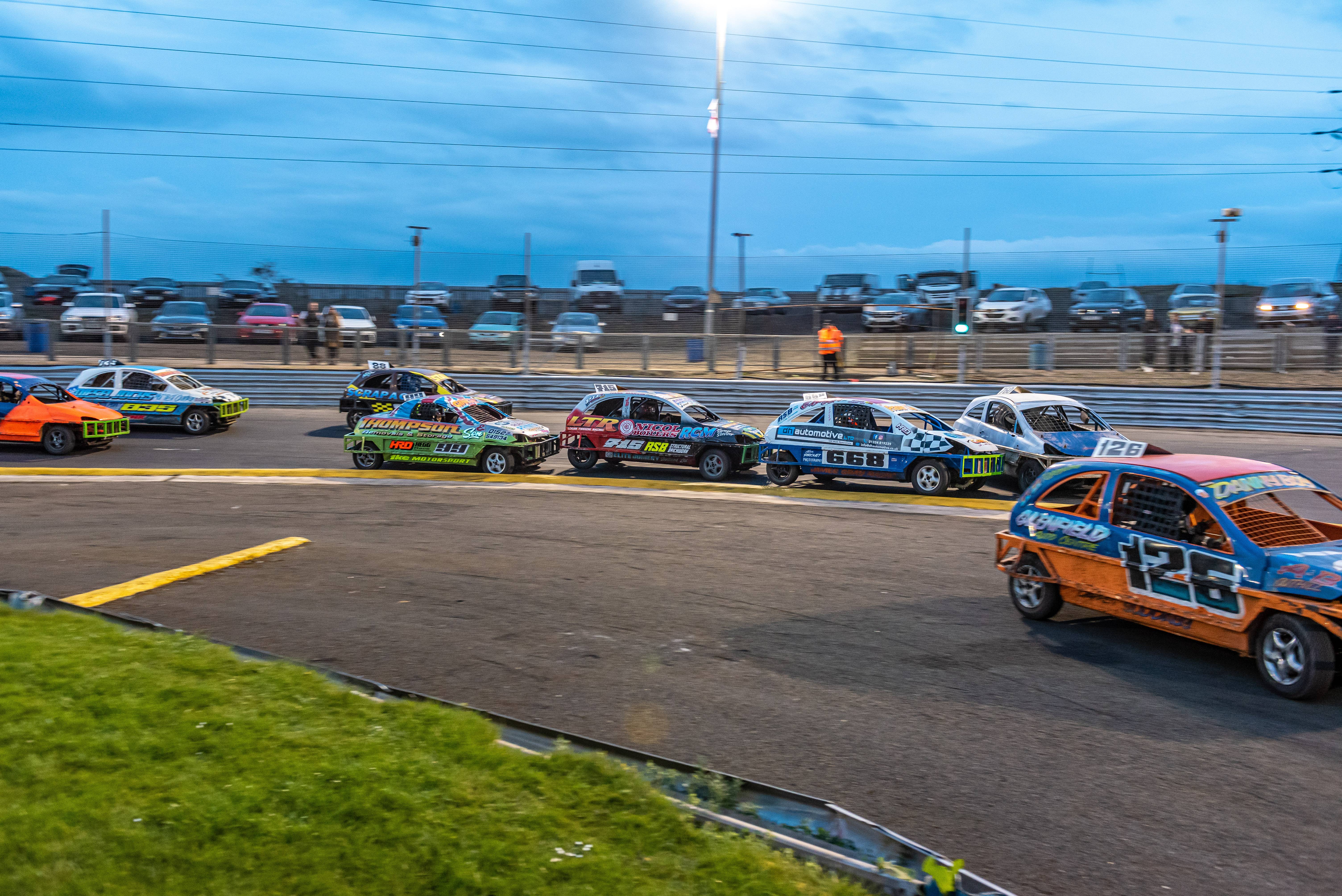 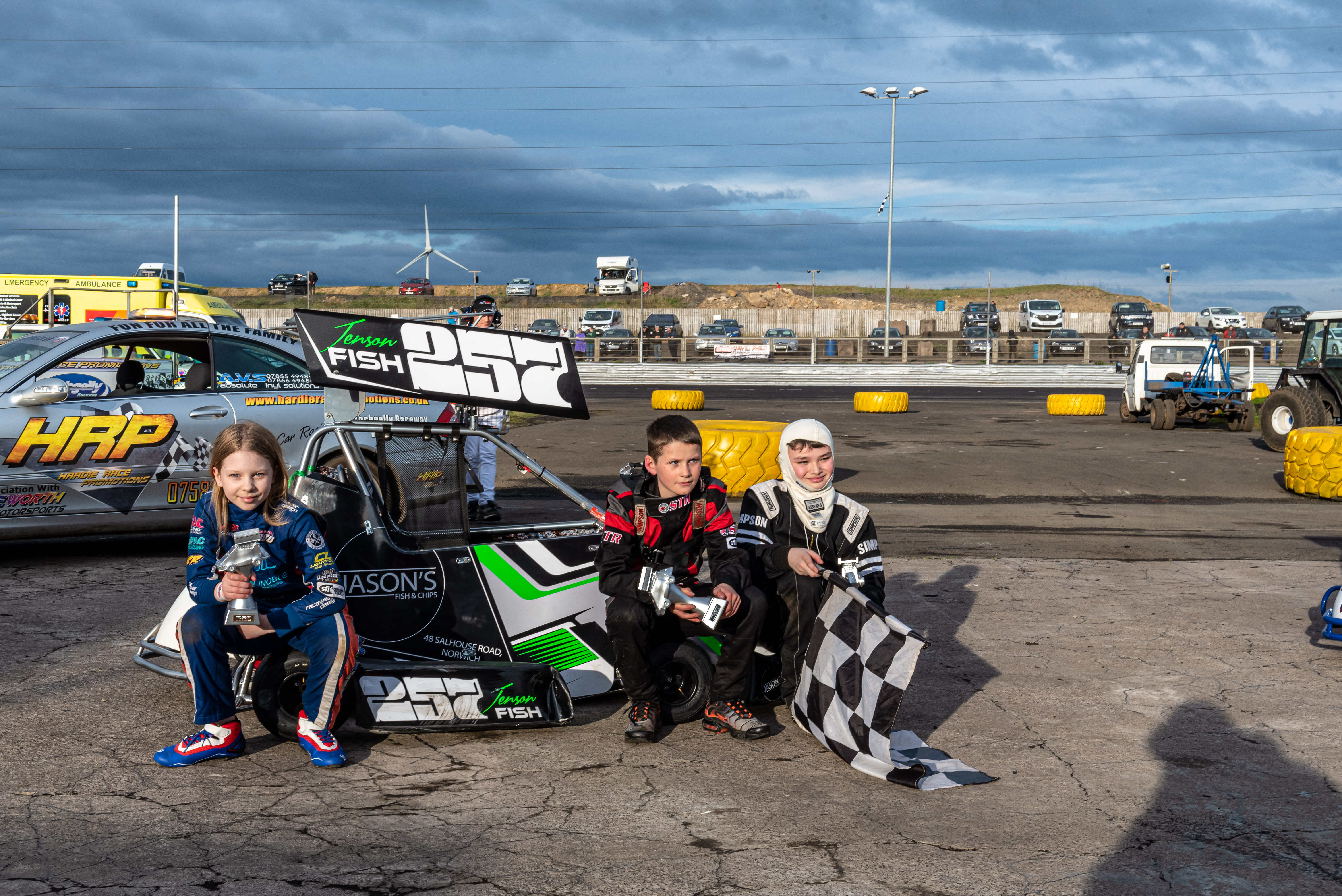 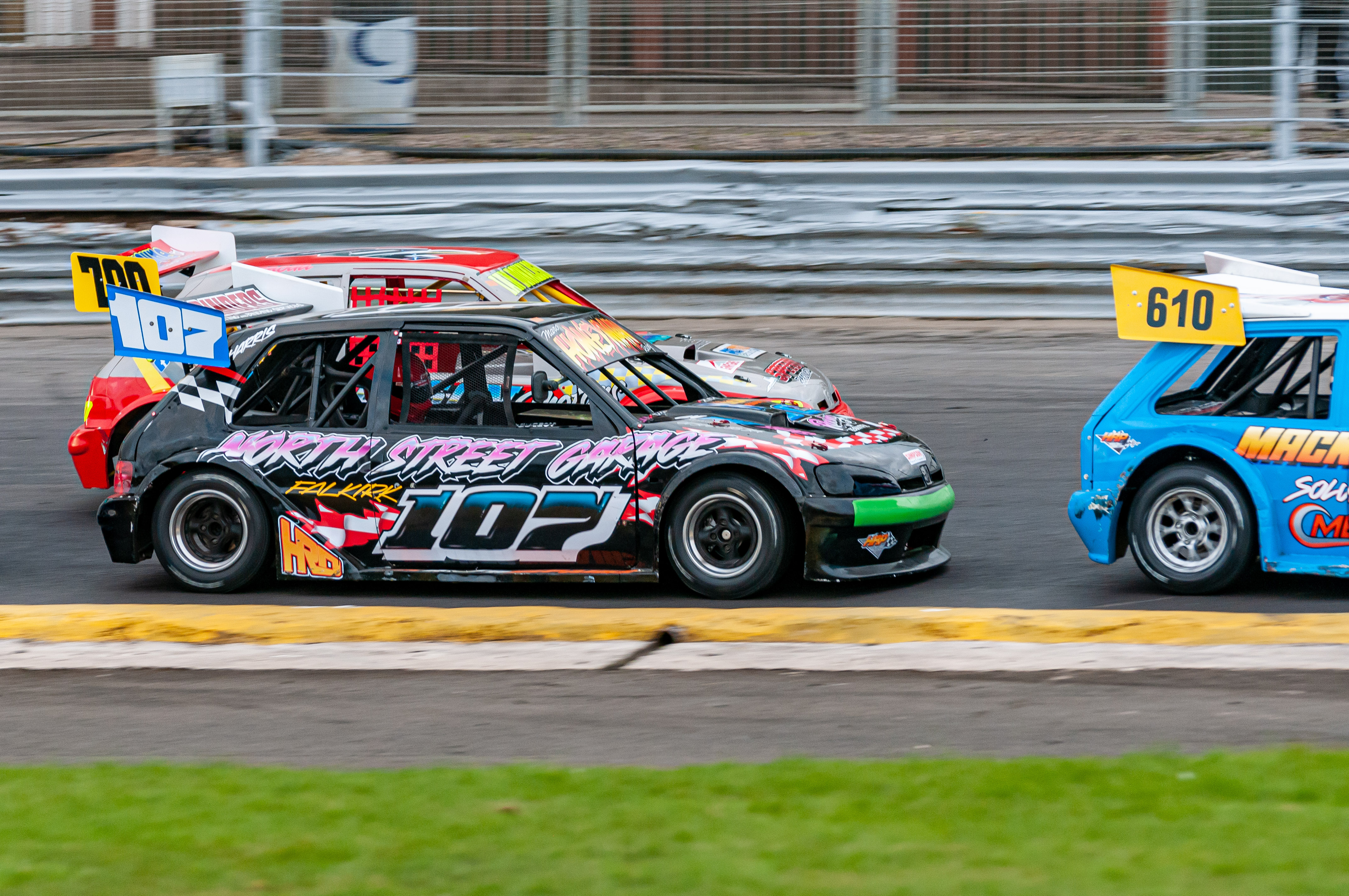 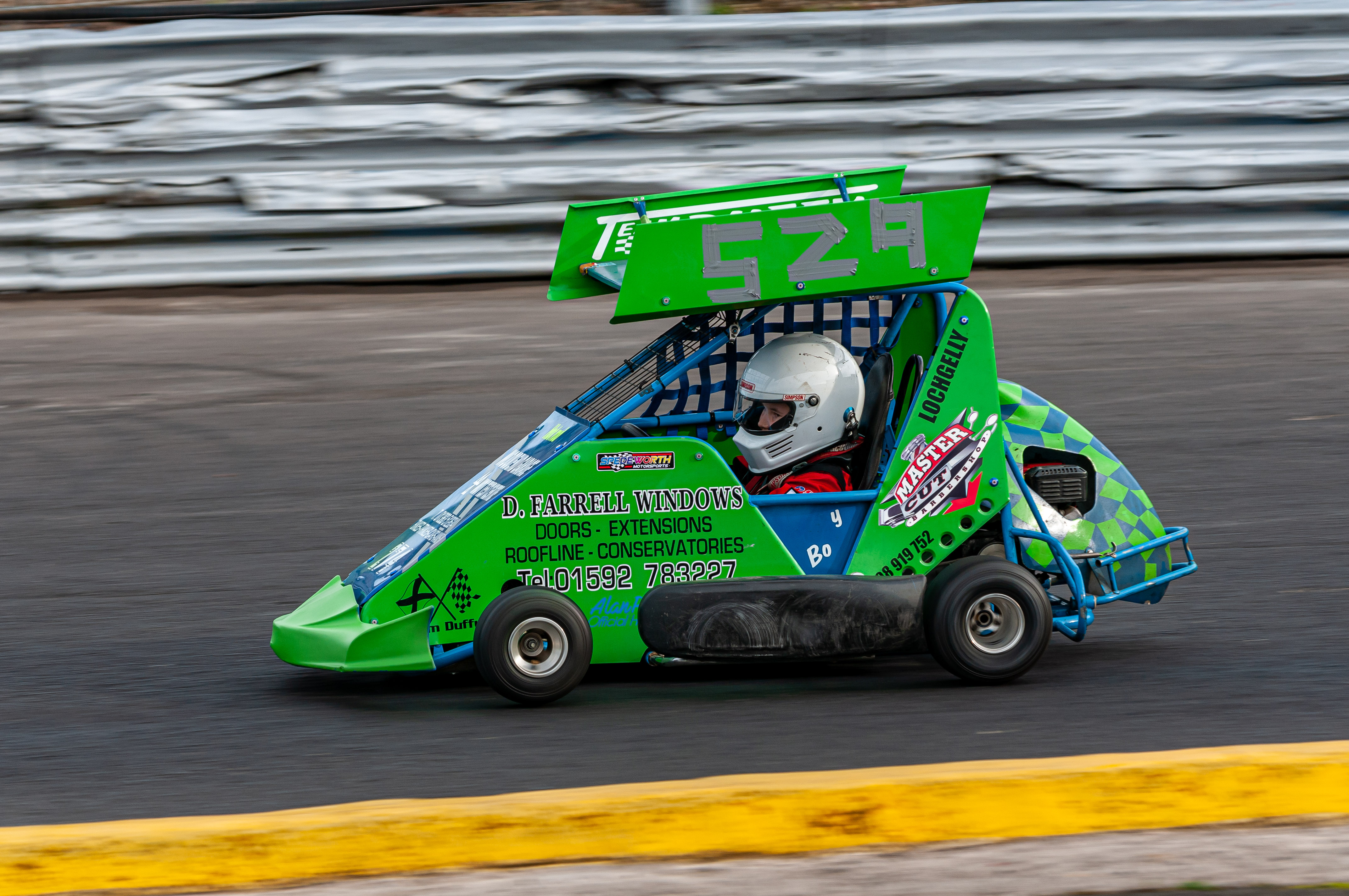 An excellent night of racing at Lochgelly Raceway seen multiple winners across all of the formula in action on Saturday night.

The Ninja Karts yet again provided a strong turnout of drivers, with just under 30 booked in to race on the day. Jenson Fish joined us north of the border, as did Jayden Roff and Ollie Gould, whilst Ryan Abernethy made the trip across the water as well. The evening started off perfectly for young Jenson Fish as he swept to a win in the whites and yellows race, before taking a win in the first main heat of the night as well, before leaving with a third place finish in his third and final race, in what was his most successful to date at Lochgelly Raceway. Mathew McIntyre out in the recently acquired Josh Duffy kart, brought his performances up a level as he finished in an excellent second position in his first race of the evening, and perhaps came away a tad unfortunate in the latter 2 races as he missed out on what would be some deserved points. Further back the grid, Jack Connor and Eevie Ford both continued their impressive starts to the 2022 campaign, whilst Kenzie Bell stepped up for the second week in succession as he looks to get back to the form that he showed in much of 2021. Jack Connor seems to be the consistent driver amongst the top 3 or 4 karts at the moment however, as he brought his kart to a trio of top 3 finishes – 1x 1st and 2x 2nd places. Eevie Ford came away with another top three finish in her opening race of the night, before a fifth place in her second heat, and a DNF in the final race of the day for the youngsters. Kenzie Bell took a race win in the second heat of the evening, with 2 other good points scoring finishes in the other heats. Dougie Kidd and Stuart Shevill both continue to score well from the red grade likewise, with Shevill showing good consistency, and Kidd managing to pick up a runners up spot in the third and final heat of Saturday night. Caelan Grant continued his recent run of points scoring meetings, as he again picked up some more points that will likely see him move back up the grades.

The 1300 Stock Cars provided some great racing throughout the evening with lots of bumper-work throughout the night as the cars jostled for position. Gregor Whyte had a fantastic evening as he swept to a heat win in the opening race, before rounding it off with 2 further runner up spots, as he just missed out on a heat and final double, finishing just a car length behind Kai Gilmour in the meeting final. Gilmour himself, was back on form, as he took a heat and final double, whilst didn’t finish in the opening race of the night. This heat and final double will see him promoted to red grade for the next meeting where the going will be a little tougher with the likes of Fraser Clark, Danny Whyte and Kyle Hegg all hot on his heels from the off. Regular English visitor, Jacob Roff was again with us at Lochgelly Raceway, though struggled a bit more than his previous outings, though did manage to pick up a 2nd place finish in the opening heat of the night, as he held off Fraser Clark and Kyle Hegg behind him. Craig Haxton was with us and went about his business un-noticed on the most part, as his cool and collective driving style seen him pick up a few good results for his efforts. Although the season is young, it appears that Fraser Clark and Kyle Hegg are going to be in a titanic scrap for the battle for the points this year, with very little between them though Clark seems to have the early season advantage.

The CC Rods, a domestic class at Lochgelly Raceway, again, provided some great racing throughout the night, with some fantastic battles throughout each of the three races. Lee Scott and Kyle Hutchison were never really far away from each other as they battled for places throughout the night. Chris Hutchison, Reiss Wilson and Raymond Brown were the race winners, with Dale Burt and Kevin Hutchison both scoring well in what was a great night of racing for the formula. Mirran Adams continues to find her feet in the class, and going by her form on Saturday, a race win may not be too far away for the Ministox graduate.

The 2.0 Hot Rods were with us for the second week in succession, in a field that included 4 England based drivers – James Morris is now a regular attendee at Lochgelly Raceway, whilst Chris Crane, Mitch Souter and Chevy Mills made the trip north – perhaps with one eye on the World Final to be held here later in the year. Kevin Stewart found himself racing from red grade this week having won two races last week, and found things a bit more difficult as he tried to battle through for every point available. World Champion James Morris was in great form on the night – taking a three top 3 finishes on the night – a 1st, a 2nd and a 3rd, with the 1st place finish coming in the meeting final as he romped away from the pack behind. Keith Brown had his best showing of 2022 as he gets to grip with his car for this season, and took away a 2nd and 3rd place finish in each of his 2 heats. Marc Honeyman looks to be getting into top gear as well, as he makes adjustments to his car as well. Honeyman who was in good form last week too, took a well deserved heat win in both of his two heats, before bringing his car home in 3rd place in the meeting final, behind World Champion Morris and Scottish Champion Jason Secker.

The Ministox were with us as the final formula in action, and as always, provided brilliant racing. HRP National Points Champion Charlie Hardie was in amongst the action and found himself spun around in 2 out of 3 races, with Sam Cavanagh and Jamie Dawson catching the youngster off guard. Robbie Armit and Jake Wilson both had an excellent night – with the pair of them occupying the top 2 spots in all three races, Wilson taking the 2 heat wins before Armit took the meeting final. There was nothing between each of the 2 drivers, as both raced each other hard throughout the night in a bid to come out on top. Demi Ritchie continues to perform well from the blue grade, although was caught up with Cole Ford in the second heat, which seen her spin around and clatter the wall causing substantial damage to the front end of her car which ruled her out for the rest of the evening. Charlie Faichney appears to be taking a liking to Lochgelly Raceway, with another strong performance, whilst Hamish Plenderleith continues to have a lack of luck despite showing a lot of promise in the formula. Elsewhere, Cole Ford is getting quicker with each passing race, and was battling at the sharp end of the field for the majority of Saturday night, managing to pick up a 5th place finish in the meeting final.

We are back in action at Lochgelly Raceway on Saturday 23rd April, as the Superstox, 1300 Stock Cars, Junior Productions, National Hot Rods and ProStocks all feature in another promising race event. 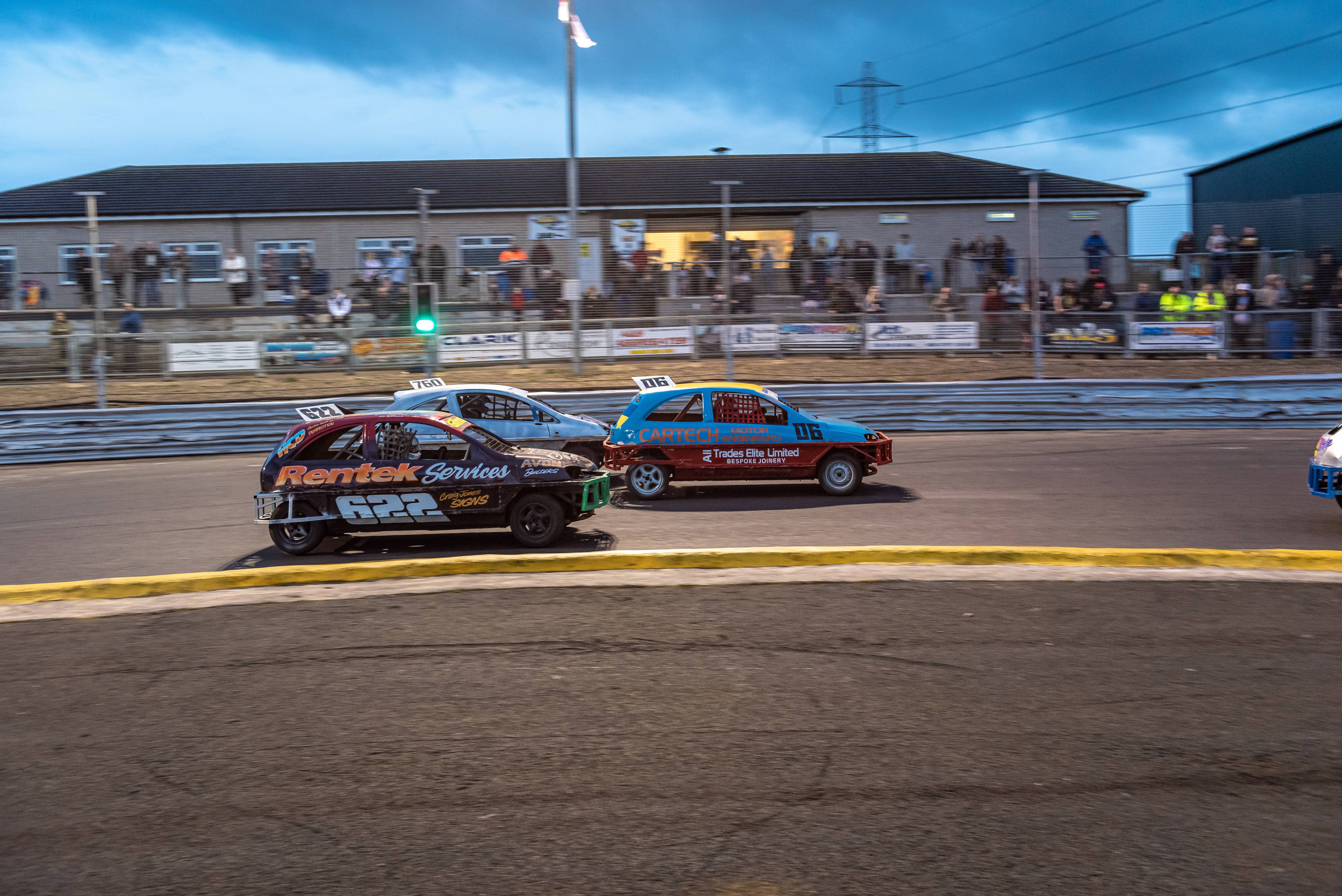