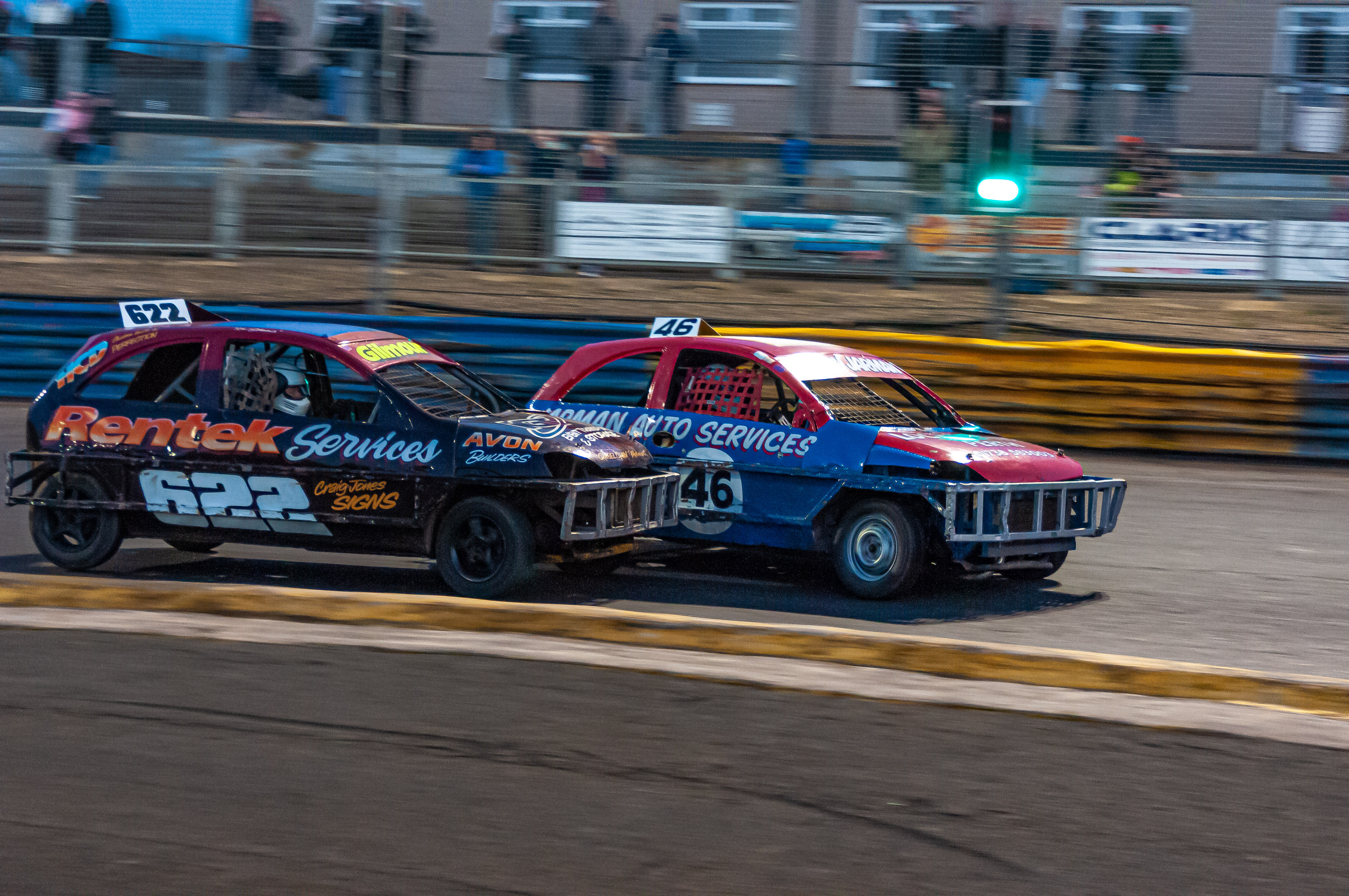 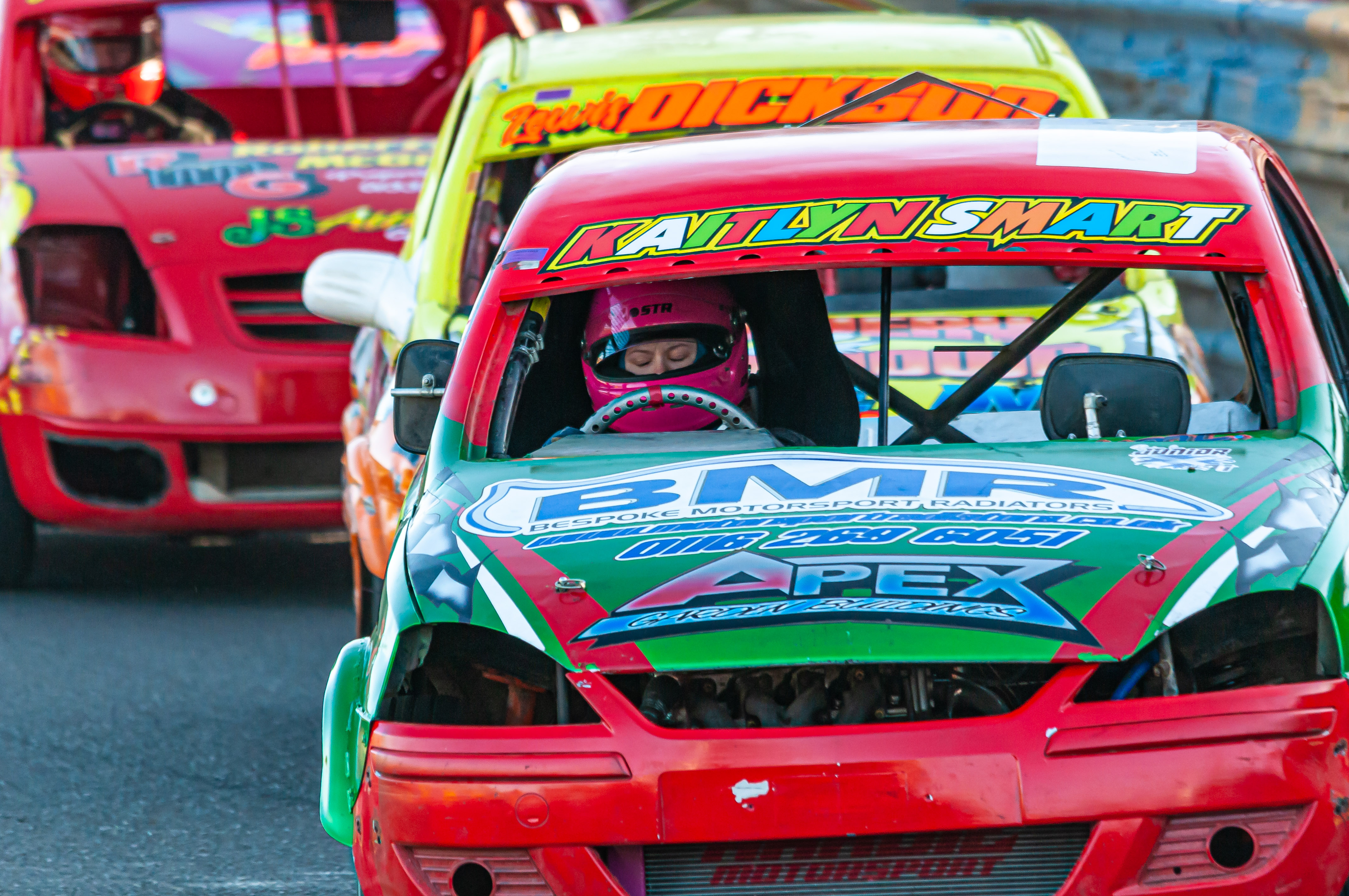 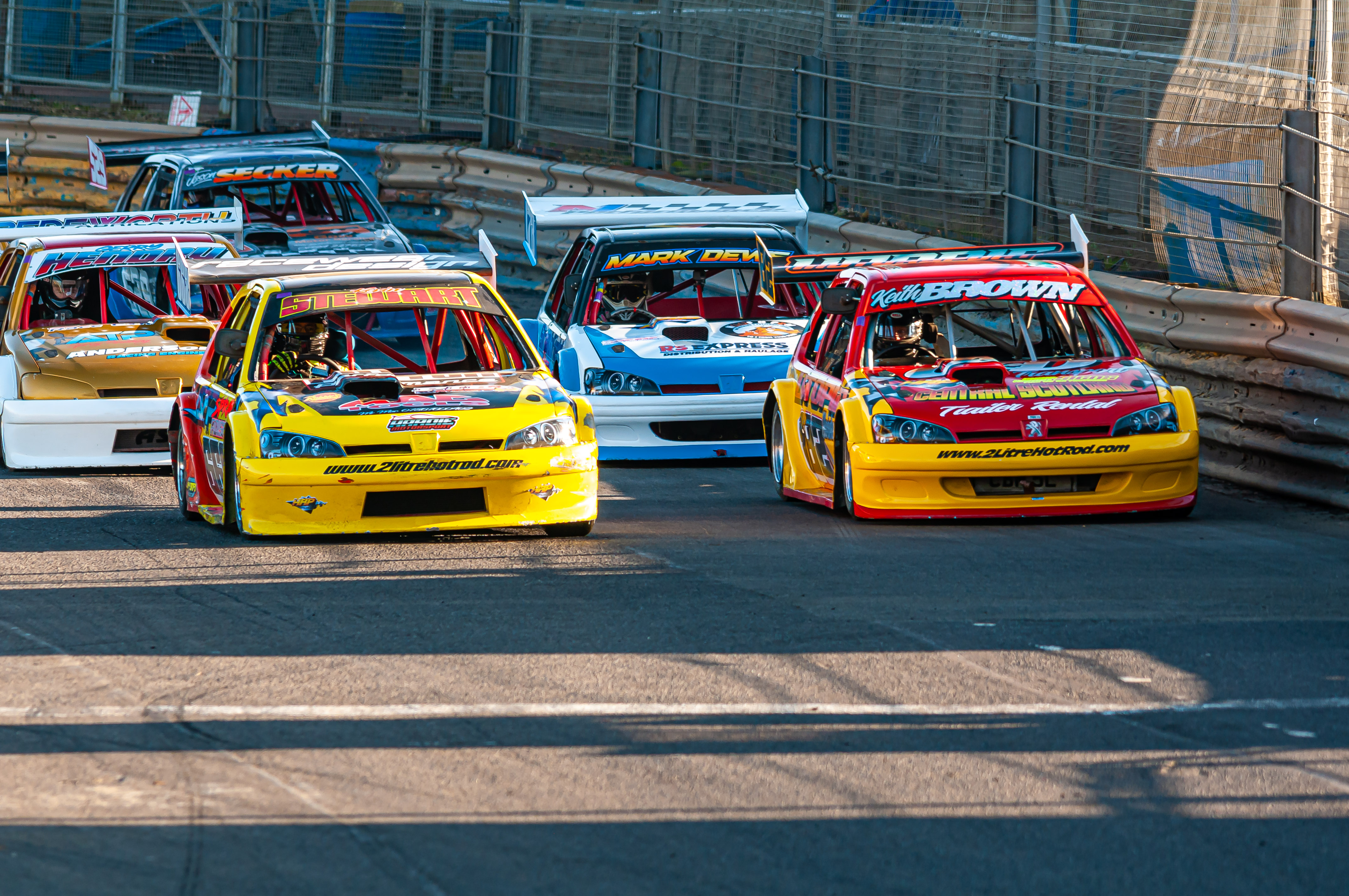 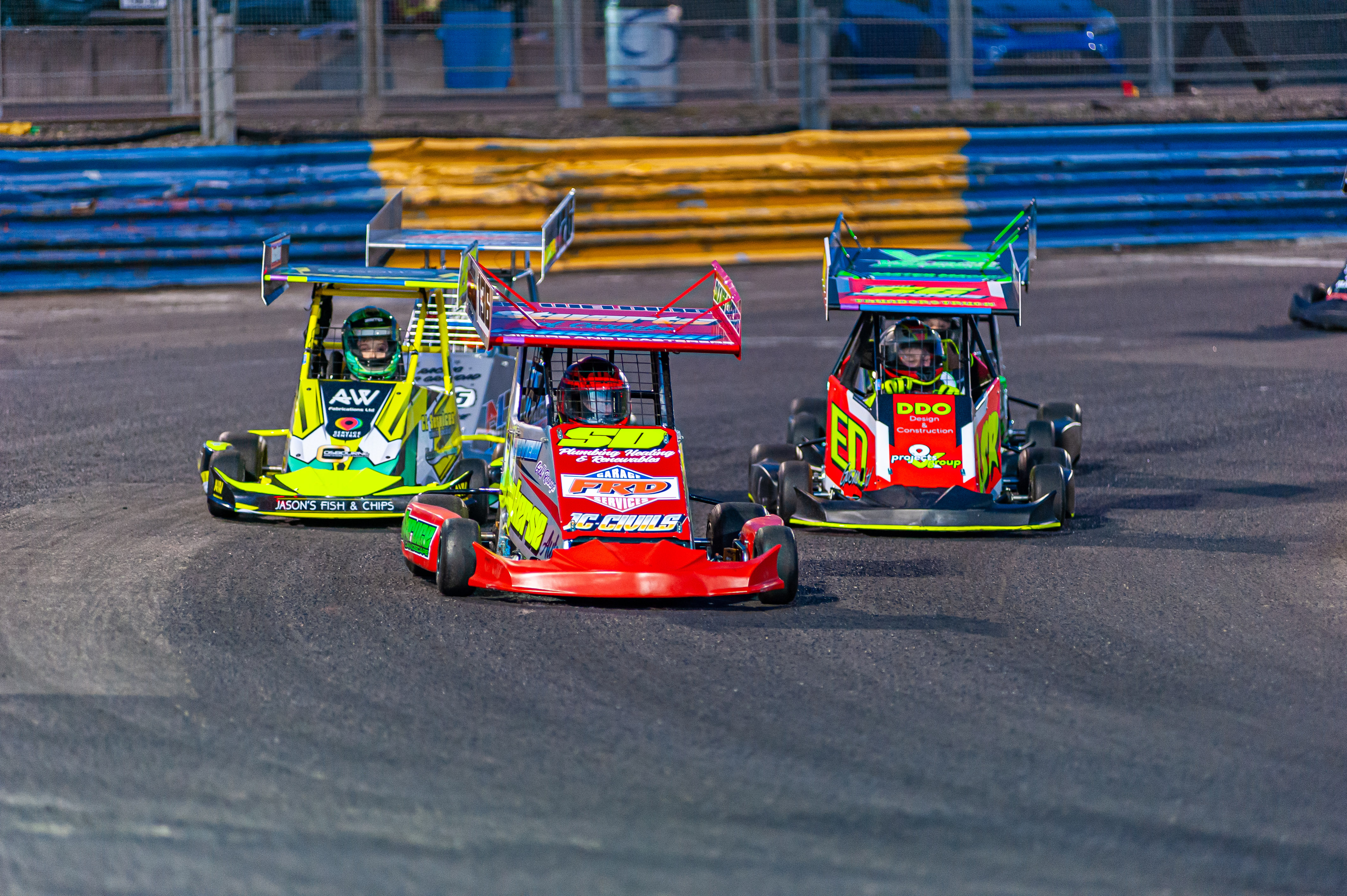 A Smart hat-trick in the Junior Productions!

A hectic 17 race format on Saturday night seen no shortage of on track action as excellent performances throughout the formula made for some brilliant viewing.

The Ninja Karts seen an impressive 37 karts take to the track on the night, with a multitude of English visitors looking to familiarize themselves with the track ahead of the British Championship in May. Just under 15 visiting karts joined us from their English base, which meant an extra race pencilled in for the youngsters in order to keep the grids a manageable level. The first race of the night, was the whites and yellows race. Just under 20 karts were on track for that race. With an opportunity to shine in a race full of drivers with less experience than the more established drivers, the race is often unpredictable, but certainly beneficial to the confidence to the youngsters on track. It would be Tommy Melrose that would take the win in the whites and yellows event, leading home the ever-improving Layton Cairns and Louie Hendry. Despite the influx of visiting drivers, it would be a Scottish clean sweep as the home drivers took away each of the race wins on the night, with Murray Hall and Jack Jones being the top English finishers, as both drivers took away a runners up spot in the third and fourth heats respectively. Eevie Ford continues to be the driver to beat however, with the St Boswells girl showing her fellow drivers the way around the raceway, with some impressively consistent lap times. Eevie took away another couple of race wins on Saturday, as she claimed victory in heat 1 and 4 on the night. Jack Connor, the English Open Champion, had a good performance on the night. Starting from the back in each of his 3 races, he managed to take victory in heat 2, having found himself finishing behind Eevie in heat 1. There was a first heat win for Stuart Shevill Jnr in the Ninja Karts – with the youngster improving with each passing meeting and will likely see himself move up to red grade come the start of April, having also picked up a third place finish in the opening heat of the night.

The CC Rods were out in force, with a couple of drivers making their first outing of the 2022 season, including Natalie Mason and David Glencross. Glencross started his season in the best possible fashion, as he raced superbly to a race win in the opening heat of the night for the CC Rods. Chris Hutchison and Graham Campbell completed the top 3, whilst Scottish Champion Ian Christie just missed out having battled through from the back of the grid. The 2nd heat of the night for the ‘budget’ non contact class would see Chris Hutchison take victory, pipping Glencross to the line, whilst Andy Nelson completed the top 3 in what was another hard fought race with lots of battles throughout. The meeting final would see the cars lined up based on the points scored in the heats. Glencross and Hutchison both occupied the front row of the grid, and it was Hutchison that got the break at the start of the race, though found himself under pressure right from the get-go. Glencross, and Raymond Brown both fought hard to find a way passed the Hutchison car, though neither would do so, with Hutchison claiming victory, his second of the night, with Glencross and Brown completing the top 3.

The Junior Productions have continued to go from strength to strength, with more and more drivers joining the ranks, with a few more yet to come in the weeks ahead. It was a great night for Kaitlyn Smart – who really found her form, sweeping to an excellent hat trick of race wins! Kaitlyn was relatively comfortable in the opening heat, though had to race with all her might in the latter 2 races – with Koddi Wright hot on her heels in heat 2 following a yellow flag stoppage with a handful of laps remaining, and Jack MacLeod closing in on her in the meeting final as well. Kaitlyn was unfortunate to miss out on a race win last time out, but certainly made up for it on Saturday night!! There was an excellent showing from Olivia Krzyzanowska as well, as she herself took away her best results in the formula since starting out. An excellent third place finish was well deserved in heat 2, and a top 5 finish in the meeting final will give her a welcome boost to her confidence. James Slater looks to be getting to grips with his new car, and took away a runners up spot in the opening heat of the night, before picking up some damage in heat 2, after clipping the Jack Baird car which sent him spinning across the track and stricken against the wall at the end of the back straight. William Plenderleith and Lewis Dickson both picked up another good haul of points as they both continue their impressive starts to 2022.

The 2.0 Hot Rods had an excellent outing a few weeks ago, though, were a little down on numbers on Saturday night. This didn’t stop them from putting in another impressive showing of racing, with some excellent wheel to wheel racing throughout the night. There were a couple of comings together unfortunately though, which seen a couple of drivers fall foul of the race steward. James Morris was in the thick of the action throughout the night, battling hard for a 4th place finish in the opening heat of the night, before being turned over the kerbs by Jason Secker in heat 2, and then falling foul of the steward in the meeting final for a couple of black cross offences. Gerry Hendry was the driver that stepped up when it mattered though and made the most of the cars battling it out behind him as he stormed to a heat and final double, with Kevin Stewart taking a race win in the other heat – though Hendry was pushing him around the raceway as challenged Stewart for the win in that race! National Points Champion Cameron Willacy will be happy to have turned the corner having had a difficult outing last time out, and finally put a decent haul of points on the board on Saturday night. A runners up spot in the meeting final was a well deserved result having battled through to good finishes in each of his 2 heats.

The 1300 Stock Cars seen a few drivers turn up on the night that weren’t booked to race, pushing the car numbers up towards the 25 car mark on the night, which provided some great racing as a result, with plenty of bumper work going on as a result. A trio of different winners on the night, could have been any of several drivers – though, race wins would go to Blair Anderson, Kai Gilmour and Fraser Clark. All three drivers put in an excellent showing on the night, with each of them unfortunate not to have picked up more than 1 race win!! Jacob Roff was back with us again, and was again in impressive form. Kyle Hegg and Danny Whyte both put in some great performances, with plenty of pushing going on, though, both failed to take away any podium finishes on the night. The meeting final seen another one of those, ‘one of the best finishes you’ll see’ moments. Going into the last lap, a group of 5 cars were in with a chance of victory – Kyle Hegg, Fraser Clark, Kai Gilmour, Blair Robertson and Jacob Roff. Bumpers would go in on turns 1 and 2, with the lead changing hands through turn 1 to the exit of turn 2, then going into turns 3 and 4, a big push would come in, with the cars almost 5 abreast at one point as a result. As the cars exited the corner, Gilmour found himself pointing the wrong way, and unlike Hegg last weekend, didn’t make it across the line. Clark would come out ahead of Robertson and Roff, with Hegg just behind, with around a second separating the top 4 cars.

We are back in action this Saturday evening – the Superstox return to action with a trio of visiting drivers already booked to race, alongside the Ministox, Stock Rods, Scrap A Car Scotland Micro Bangers and Junior Productions.