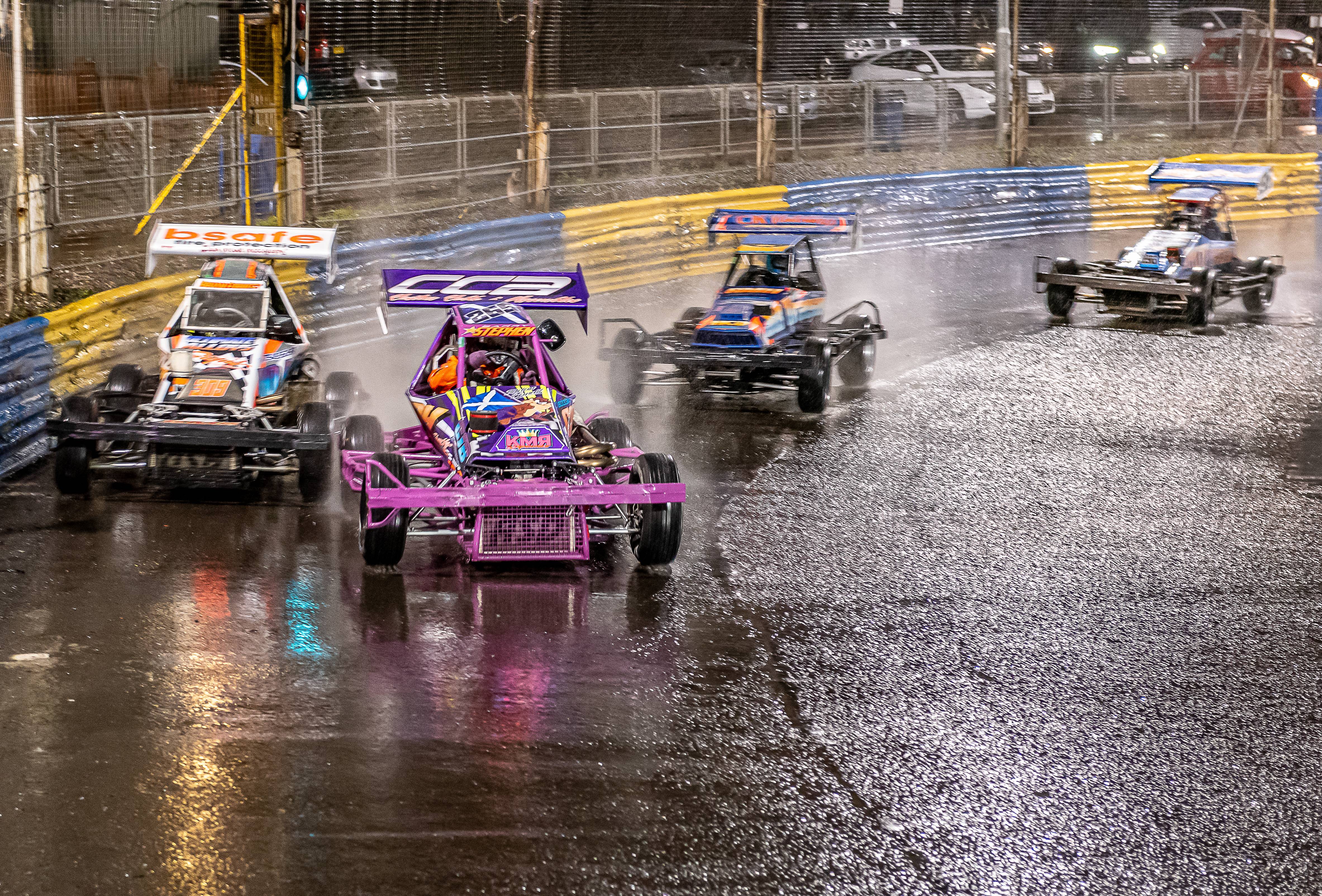 Please note; Results may differ to as announced / seen on the night after video review.

It was a wet (very) and miserable, some may call it dreicht, evening on Saturday night at Lochgelly Raceway as the drivers battled to put on a show through the flowing water around the raceway!

The Superstox battled it out for the final time in the current National Points cycle, and with the Scottish Championship on offer, it was a potential mouthwatering night of racing. The Scottish Championship was the first race on the cards for the Superstox, and with 14 drivers booked to race, and a few having issues before the racing even commenced, it was a somewhat depleted field of cars. Dean Johnston looked to be in with a chance of taking the title had it not been for a coming together with Ciaran Adams which resulted in a yellow flag stoppage and Johnston out of the race. Barry Stephen took the fight to Bryan Forrest and with both cars clattering the barrier on several occasions as they fought it out, it was Forrest who took the advantage with outgoing champion Barry Stephen retiring from the race. Bryan took the flag and the Scottish Championship ahead of Allan Gibson and Mark Brady, in what turned out to be an excellent race despite the conditions.

The Junior Productions seen some excellent racing with the Scottish Championship also being contested. Reigning champion Koddi Wright brought out a new car as he set about trying to defend his title. 2 reverse grid heats seen the order mixed up somewhat from the norm. Heat 1 seen Lennon Grant take a flag to flag victory closely followed by the inform John Bremner and Jensen Bell. Jensen looked mighty quick in the wet conditions, though was unable to make inroads into the lead held by Grant and Bremner. Heat 2 of the evening seen Harvey Sneddon start at the front and race to victory ahead of Dylan Smart and Koddi Wright. Following on from the 2 heats, the computer done its work and calculated the grid for the meeting final with Harvey Sneddon and Lennon Grant qualifying on the front row, with Bremner and Jensen Bell on row 2. Koddi Wright and Jas Walle qualified row 3. As the green flag dropped it was Sneddon who got away first, with a coming together behind him, which seen Jensen Bell head onto the infield before recovering back onto the track, a few places down. Jensen kept his head down though, and battled his way back through to chase after the lead cars – Sneddon, Jas Wall and John Bremner. As the laps went on, Sneddon held a solid inside line, with Jas Walle trying to make a move on the outside line. The 2 cars battled for the lead side by side for the last 5 laps, with John Bremner and Jensen Bell side by side as well as they all hustled for the lead of the race. A photo finish looked a possibility with absolutely nothing between the lead pair, however, on the last lap, Walle lost a bit of ground alongside Sneddon which gave Sneddon the momentum and space to take the flag, around half a car ahead of Walle, with Bell and Bremner finishing just behind in what was a truly excellent race from the youngsters.

The Ninja Karts also featured on the agenda, with English driver Clark Ferris taking a double race win. Kal Wotherspoon and Stuart Shevill Jnr both put in impressive performances as they both gave there confidence an excellent boost with both drivers leaving with a couple of trophies! Shevill Jnr took a race win in the Whites and Yellows race and followed that up with an excellent drive in the first main heat finishing 3rd, narrowly being overcome by Dougie Kidd on the last completed lap of the race. Kal Wotherspoon took a 2nd in the 2nd race, with Leeland Dearn taking a 3rd place in only his 2nd meeting of the season. The final race of the night for the youngsters was cancelled due to the weather conditions continuing to worsen! Fair play to the youngsters wanting to race in those conditions though!

The 2.0 Hot Rods battled it out in what was there final meeting ahead of the Scottish Championship in a couple of weeks time. Despite the atrocious conditions, the racing was good to watch with different lines being taken by the drivers on each lap, providing some interesting, and close racing! Scott Devine had the perfect meeting as he swept to an impressive hat trick of race wins. Gerry Hendry continued his impressive form as he returns to racing, taking 2x 2nd places and a 3rd place on the night. Ryan Adamson took a 2nd position in heat 1, before retiring in each of the next 2 races.

The ProStocks featured for the final time ahead of the World Cup next weekend. The nudge and spin formula certainly provided a few talking points, with a few big hits throughout the night, which bordered on being excessive. Tam Melrose though, showed his experience and took a comfortable double heat win!

Racing kicks off at 4pm this Saturday as the Micro Bangers battle it out for there World Cup!