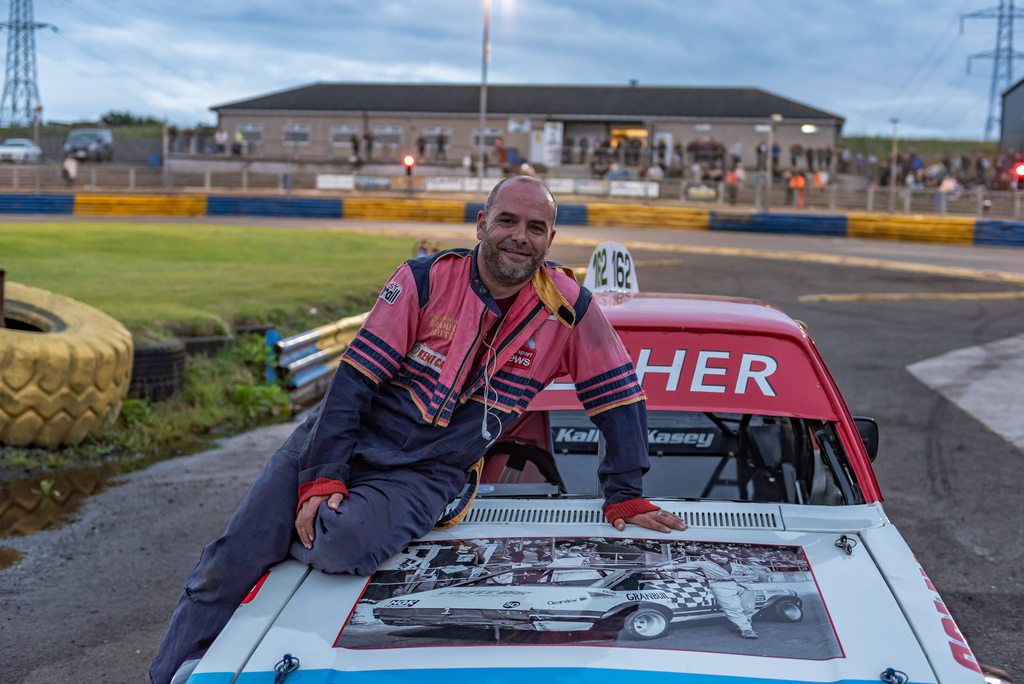 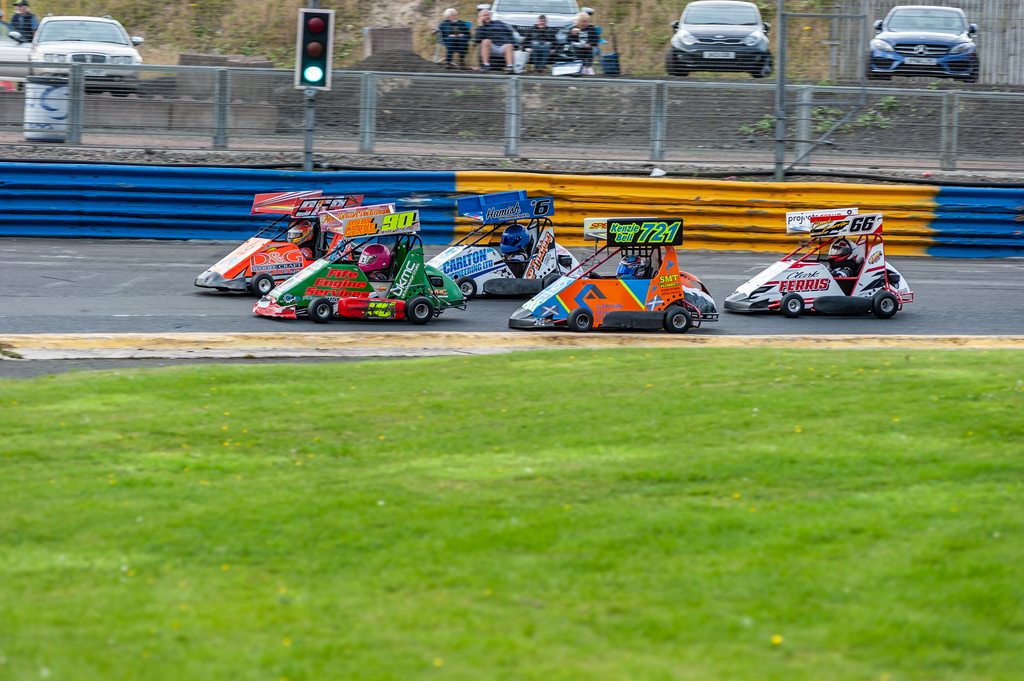 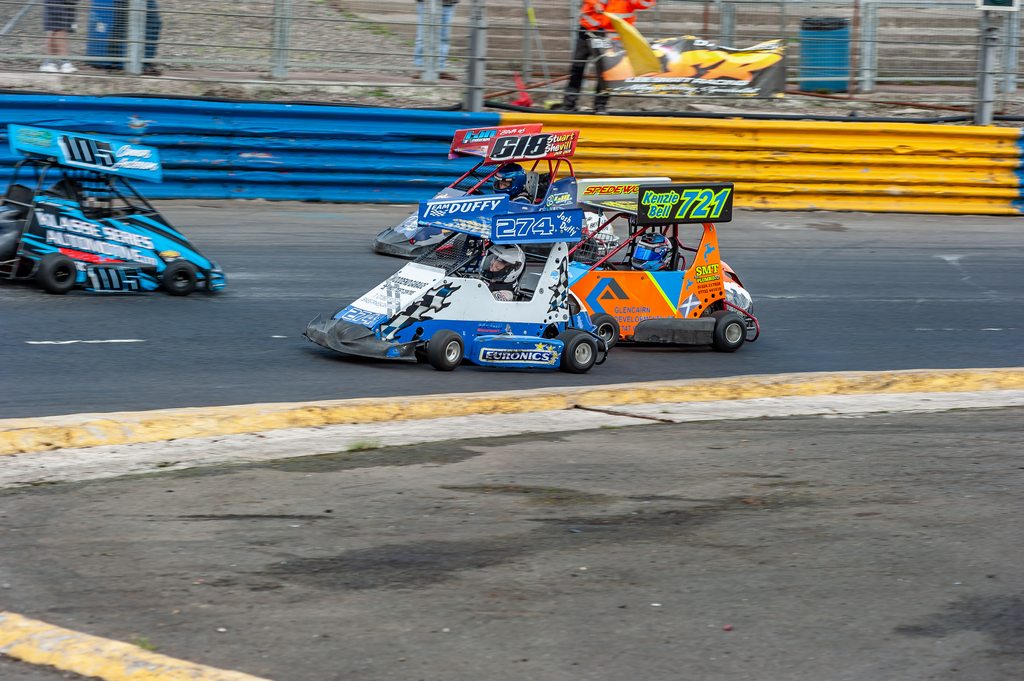 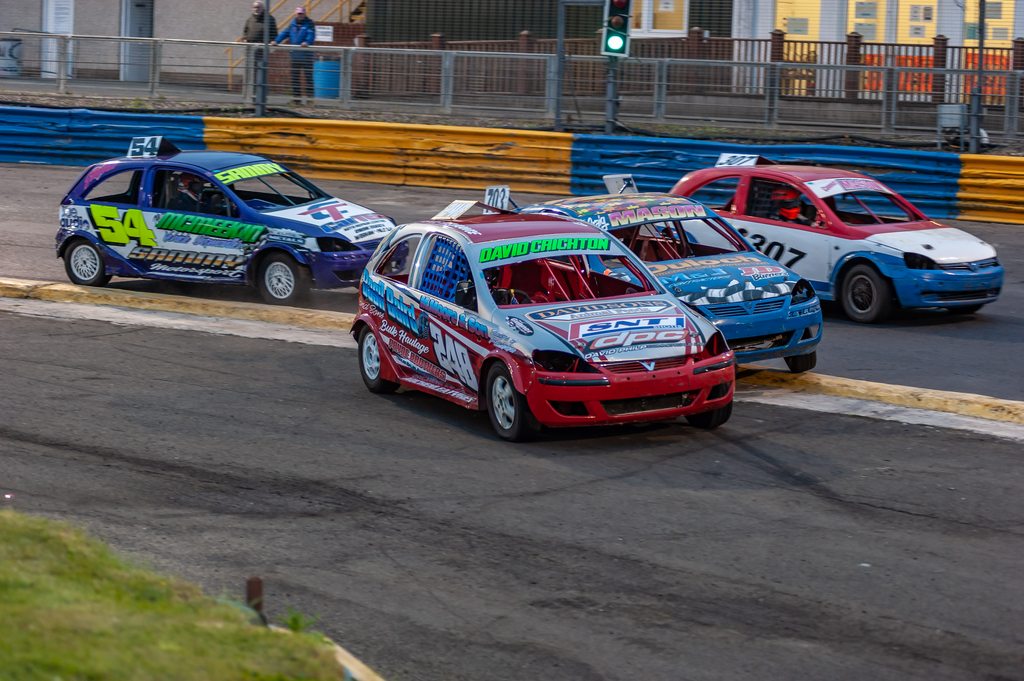 Colin Frame return to action for the first time since 2018 and was immediately back on the pace in the Superstox class - taking a heat, and a memorable final victory, claiming the inaugural John Gibson Memorial for his efforts.

The Superstox had a couple of drivers missing from action, but nevertheless, put on an entertaining night of racing with all of the drivers keen to get their hands on the silverware up for grabs on the night. The leading duo in the National Points, Bryan Forrest and Dean Johnston both put in an excellent showing for the crowd, exchanging blows in each of the three races, with the hits seemingly getting harder and harder as the night went on!! Aaron Riddell continued his excellent showing having only returned to action a few weeks ago, picking up another strong haul of points as a result of his efforts. It was Bryan Forrest who claimed the opening race win of the night, having broke clear of Dean Johnston to create a bit of breathing space behind him, enabling him to put the foot down and chase after the lead drivers before taking the win. Heat 2 of the night, went to the already mentioned Colin Frame - who was beginning to find his feet in the car again, with Kenny McKenzie bringing his car home in 2nd place, in what was his first appearance since mid June. Steven Ballentine crossed the win first, though, was later removed from the result for getting out of his car too soon. Bryan Forrest again got the better of Dean Johnston in the second heat of the night having traded blows with the 446 pilot throughout the race, though both cars finished 3rd and 4th respectively. The meeting final was the race that the silverware was on offer for. Colin Frame opened up a good lead mid race - leading by almost a full straight at one point in the race - with the pack behind him battling it out enabling him to put in some solid laps unchallenged. Forrest and Johnston again traded blows, and this time, Johnston was the one that broke clear of the 309 machine, with Forrest getting caught on the outside dropping him a few places further back as a result. Dean Johnston put in some fast laps in the closing stages of the race as he reeled in the 53 car, and as the gap closed down, all eyes were soon on the lead duo as they became closer and closer in the last few laps. As the lap boards came out, the gap closed with each passing lap, and back markers would soon be an obstacle for both drivers to overcome. The 1 lap board was given to the 53 car of Colin Frame, with a few car lengths of breathing space to Dean Johnston, it looked to be too much but that didn\'t stop Johnston from trying as he went in hard on the last corner of the last lap of the race to try and make contact with the back bumper of the 53 car. It was to no avail however, as he narrowly missed it, with Colin Frame completing the last corner to take the win! Johnston brought his car home in 2nd, with Steven Ballentine in 3rd place! A race I\'m sure the family and friends of John would have been proud of!

The UKMC sponsored Ninja Karts had a healthy 25 karts in attendance, with several debutants amongst those, and a few visiting drivers as well. The Ninja Kart class always impress, though, at times, we often see a few spinners and restarts and Saturday night was no different. Given the number of newcomers coming into the formula, that is always going to be the case, and has to be expected, and we are pleased to see that, over time, the number of stoppages has improved, both with the drivers increasing experience, as well as drivers listening to race receiver instructions. Connor Anderson - A newcomer only a handful of meetings ago, picked up his first win in the formula, claiming the Whites and Yellows race win, with Katie Lee Smart (making her first appearance of the season) finishing in 2nd place, with Saul Galloway in 3rd. The Whites and Yellows race has been a roaring success at HRP, giving drivers the opportunity to find track time without being swallowed up by the blue and red graded drivers, and find themselves in the formula. Kenzie Bell took a double race win on Saturday night, as he maintained his charge to become the 2021 National Points Champion, though, the battle looks set to go right to the end of the season as Hamish Plenderleith, Eevie Ford and Dougie Kidd are all also up there in the reckoning, with Kenzie Kopacz lurking in the wings as well. Stuart Shevill Jnr continued to show his improvement as he raced to another couple of podium finishes in 2 of his 3 races, whilst points challenger Dougie Kidd also took a race win. Local driver Aiden Duffy had his best result of the season in heat 2, as he took away a 2nd place trophy much to his delight.

The Junior Productions provided another excellent showing of racing, despite a few issues in the first race of the night which seen a couple of drivers loaded up for their actions. Northern Irish driver Sam Percy took a double heat win which seen him promoted to red grade as a result, with Jack MacLeod claiming the meeting final - his first since he suffered some substantial damage several meetings back. Lennon Grant continues to be the dark horse in the formula, as he produces some calm and assured finishes, scoring points in the majority of races, keeping his nose clean and staying out of bother... Perhaps one of the most consistent drivers over the last month or two as he creeps up the points chart. Jase Walle currently tops the points charts, and is another driver who seems to fly under the radar at times - staying out of bother and navigating the field with class, picking up constant good points as a result. Cole Ford and Declan Dixon - both newcomers to the formula at the start of the season, both also picked up top three finishes on the night - an encouraging sign for the formula, and both drivers given they have had a mixed start to their Junior Production careers. Lewis Dickson picked himself up and produced his best performance since being promoted to yellow grade - scoring 2x 5th place finishes - one in a heat, and the other in the meeting final.

The Classic Hot Rods had a few late cancellations, which seen a lower number of cars than expected, however, seen three different race winners on the night, Jock Campbell taking the opening heat, whilst Graeme Callendar won the second, before a delighted Keith Chesher took the meeting final!

The Stock Rods had a disappointing night - with several drivers falling foul to the rules of racing throughout the night. Something that will be addressed ahead of the Scottish Championship event next time out! David Crichton and Ian Donaldson Jnr took the heat wins, before Siobhan Martin ran away to claim the meeting final win.

We are back this Saturday night as the 1300 Stock Cars battle it out for the Scottish Championship! The ProStocks, Ministox, 2.0 Hot Rods and CC Rods all also feature!
View event laptimes on Speedhive