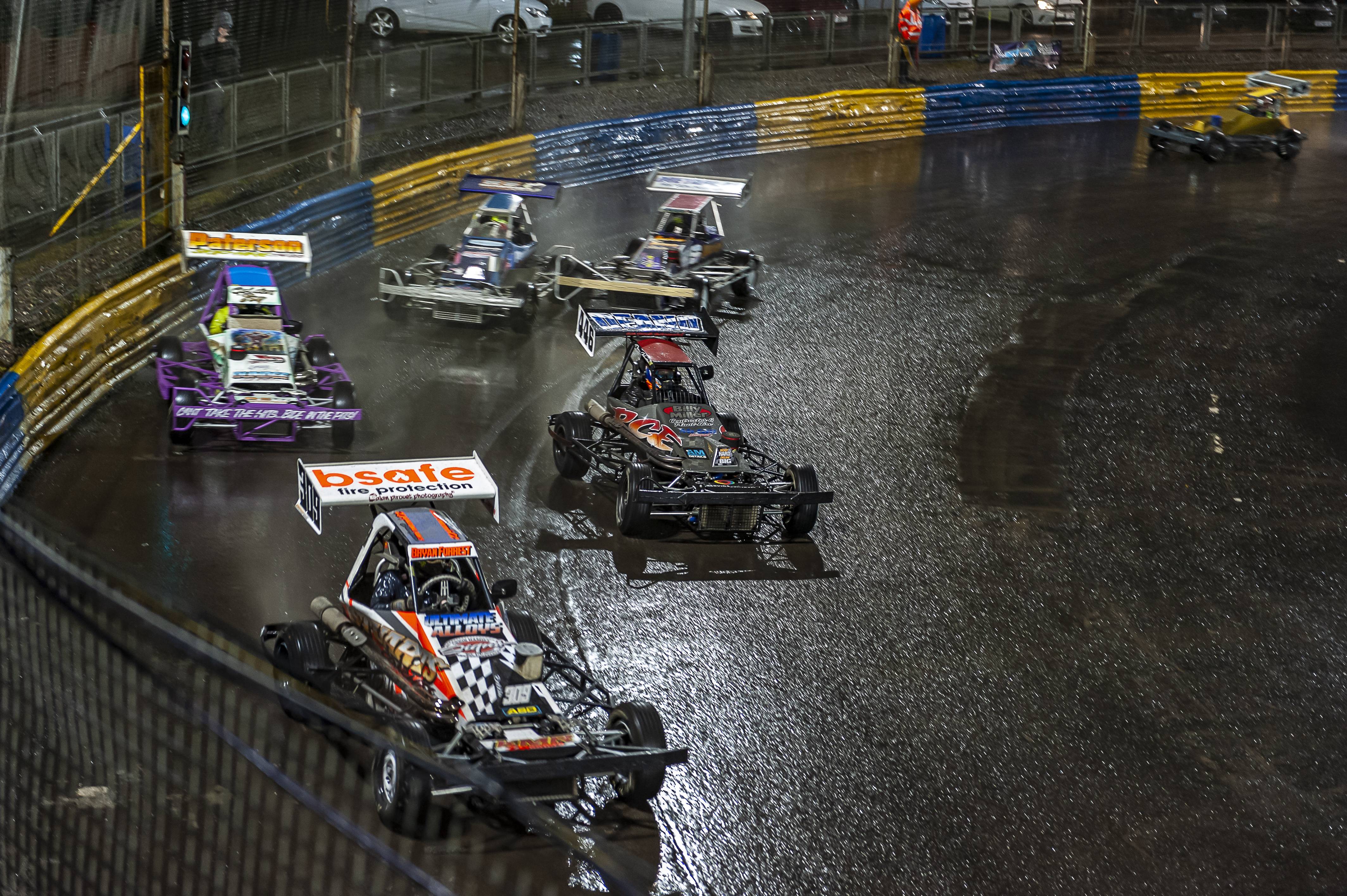 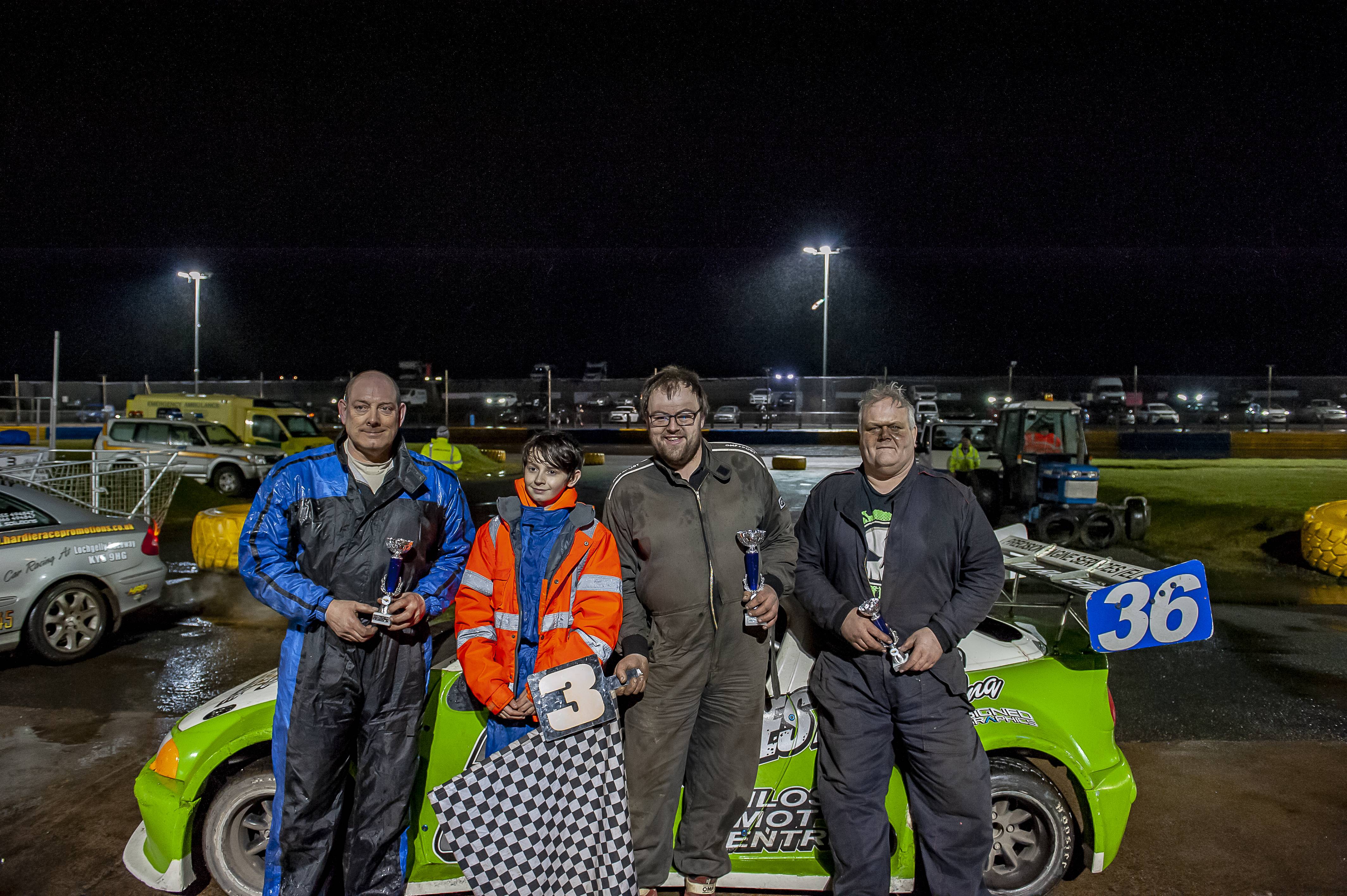 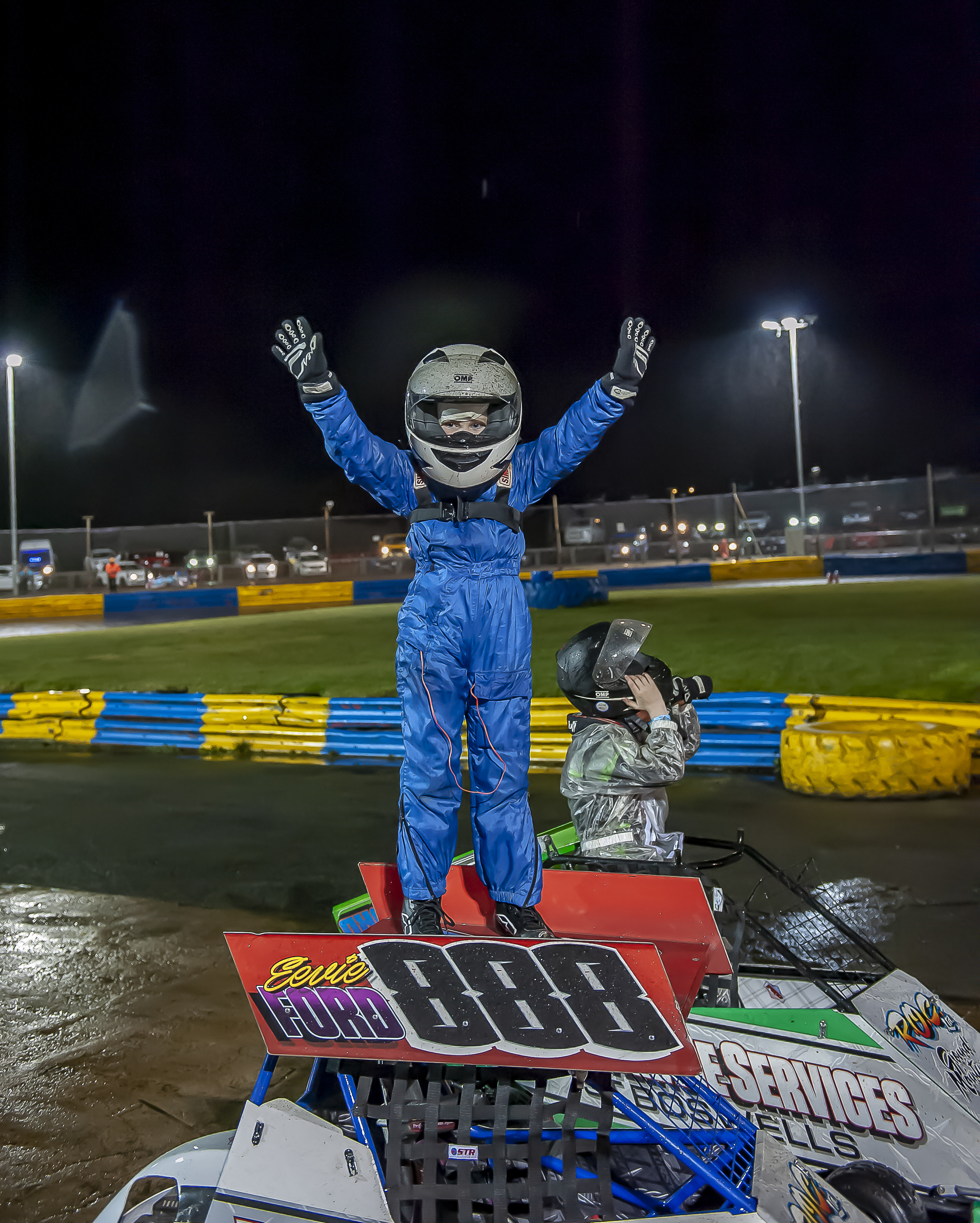 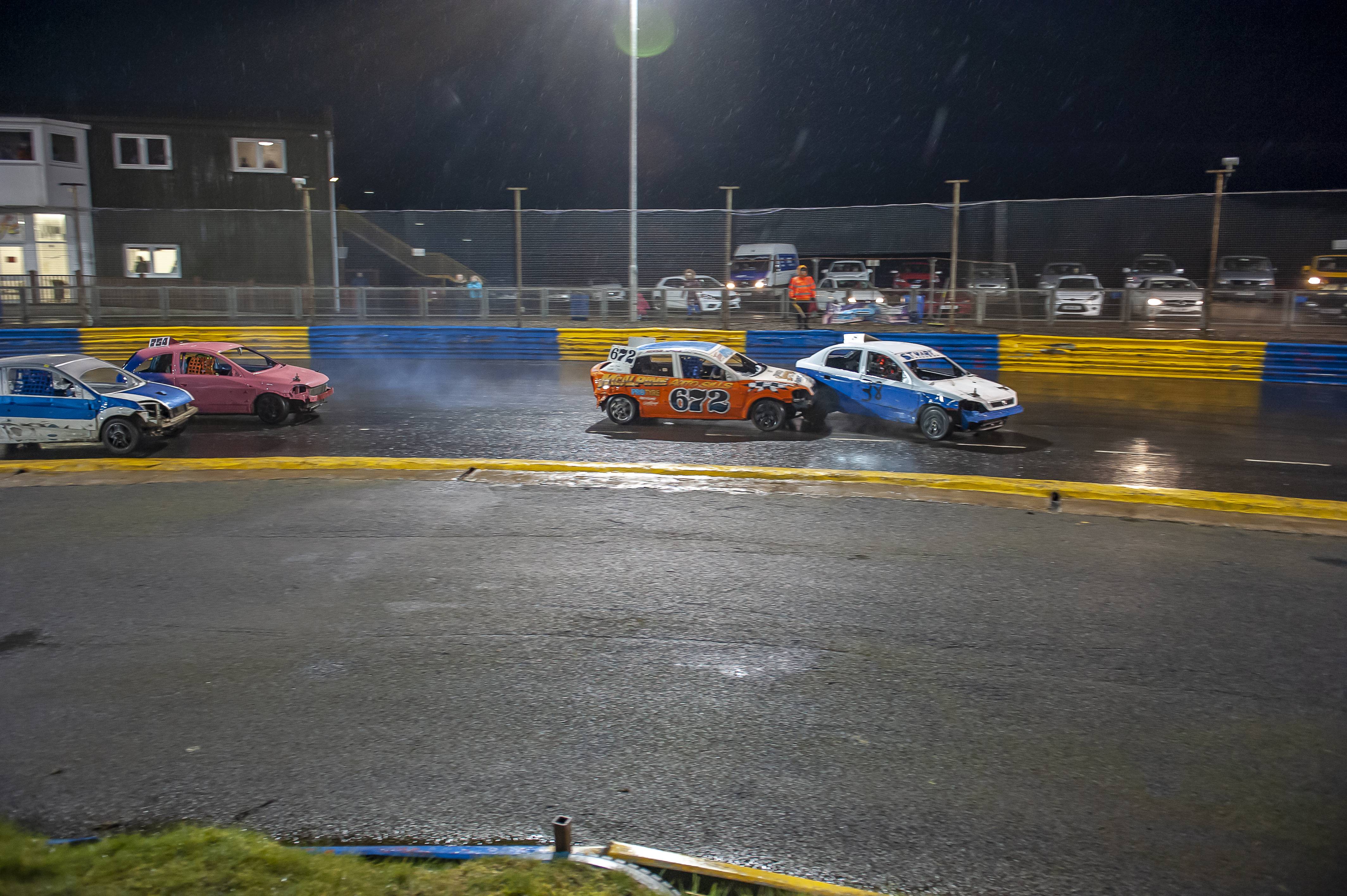 It was a fascinating night at Lochgelly Raceway on Saturday 7th March with some excellent racing seen throughout the evening. A Hat Trick of Hat Tricks going the way of Roy Anderson, Bryan Forrest and Tam Melrose on the night!

The youngsters in the Ninja Karts seen over 20 karts in action for the first outing of the year. The opening race of the night seen a race for the white and yellow graded drivers take place, and it was Eevie Ford who raced to victory, finishing well ahead of the chasing pack as she started off a night to remember. The first main race of the evening seen Jack Baird take victory by the narrowest of margins, as he finished just ahead of National Points Champion Toby Tyson, with Cole Ford rounding off the top three, only a kart length behind. Heat 2 of the night for the youngsters seen a couple of stoppages as karts spun and crashed around the raceway, most notably that of Connie Anderson and Jack Baird, with the pair having a heavy impact to the wall during the race. Eevie Ford seen her lead cut down at the start of the race with the yellow flag caution, with brother Cole just behind. Toby Tyson took advantage of the yellow flag as he made inroads after falling back early on. Eevie Ford managed to get away well and continued her lead, with Cole Ford in second place. The two battled for a few laps before Toby Tyson got involved as well. Eevie held on to take her second race win of the evening, with Tyson finishing second and Cole Ford in third! The final race of the evening for the Ninja Karts seen Toby take his first, and deserved win on the night, overcoming Cole Ford in the closing laps with a super drive from Connie Anderson in the late stages to finish in third position.

It was a night to remember for National Hot Rod driver Roy Anderson, as he looks to get into the top three qualification spots for the World Championship. In damp conditions, Roy has excelled in years gone by, but nothing quite to the standards that he set on Saturday night. ‘Rapid Roy’ took a first ever hat-trick of race wins as he pushed himself up towards the top three in the world ranking points. Gordon Alexander could do nothing to prevent the hat-trick of wins, with Alexander taking a hat-trick of runner up places on the night too! World Champion Robert McDonald paid a visit, but was plagued by engine problems throughout the evening. I’m sure Roy Anderson will be hoping for a wet European Championship weekend here at Lochgelly on the 25th and 26th April, as he looks to lock horns with some of the best in the business!

The CC Rods had an excellent 2019 season, and already, 2020 looks set to be another excellent year for the ‘budget’ non contact class. Just under 20 drivers took to the track for the opening meeting of the season. National Points Champion Ian Donaldson showed excellent pace throughout the evening, battling from the back of the grid in each of the heats. Ian Taylor showed his class as he took to the formula like a duck to water, picking up a solid set of results, improving as the evening went on. The opening race of the night seen Brian Allen take victory ahead of Ian Donaldson and Lee Scott. The second heat of the evening seen an excellent three way battle for the lead of the race. The last 5 laps or so seen Lee Scott and Ian Taylor race almost bumper to bumper as Taylor looked to find a way passed the flying Lee Scott car, and with Ian Donaldson just behind lurking for a slip up or mistake, there was no room for error from any of the lead two cars. Taylor tried the outside line, but was unable to find a way past, having to settle for second position. The meeting final seen another excellent race from the CC Rods. Ian Donaldson found the grip on the outside line to overcome Lee Scott for the lead of the race in the early stages. Scott wasn’t to be put off though, and stayed with the Donaldson car for the best part of the race, coming under pressure from the Ian Taylor car. Taylor managed to find away passed the inform Lee Scott to move into second place. Donaldson crossed the line in first place, but fell foul to a disqualification for getting out of his car without being instructed to do so, as a result Taylor inherited the race win, with Scott taking second and Andrew Nelson completing the top three.

The ProStocks were in good numbers for the opening meeting of the season for the class, with 16 cars taking to the track. The returning Tam Melrose took a hat-trick of race wins, putting an end to any quelms about him being rusty after missing the best part of 2 seasons of racing! Ryan Martin had an excellent evening, picking up a couple of second places, and narrowly missing out on a podium place in the meeting final, as he crossed the line alongside Lee Kopacz in the race for third! Jason McAlpine looked to be showing good speed as well, though was perhaps a little to eager, being disqualified in the final for 2 jump starts.

The Superstox started the season off in reasonable fashion, in less than ideal conditions. A host of new faces appeared on track and they will all take a couple of meetings to truly find their feet. It was yet another hat-trick of race wins on the night though, with Bryan Forrest completing the rout in the Superstox class. Steven Ballantine took a couple of second places in the heats before spinning in the early stages of the meeting final. Aaron Riddell and Dean Johnston both showed good pace on the night, and each of the two drivers battled hard for the third places in both the heats and the meeting final. The meeting final shaped up to be an thrilling battle amongst the two drivers, with neither holding back and using the front bumper to serious effect! Riddell would leave his mark on Johnston on one lap, the next, Johnston would leave his mark on Riddell, and as the race went on, these two started trading blows, harder and harder, and with the laps closing down, it was inevitable that one would end up with some damage. It was Riddell who came out on top of this battle, which I’m sure we’ve not seen the end of, coming home in third place, behind Forrest and Mark Dews.

We are back in action this Saturday night, with the CC Rods, 2.0 Hot Rods, 1300 Stock Cars, Ministox and Junior Productions all in action;

Any pupil from Lochgelly West Primary School, can come along to this event (14th March) free of charge, and have one adult admitted for free as well. Just bring a recent letter from the school, and the school tie to claim this offer.