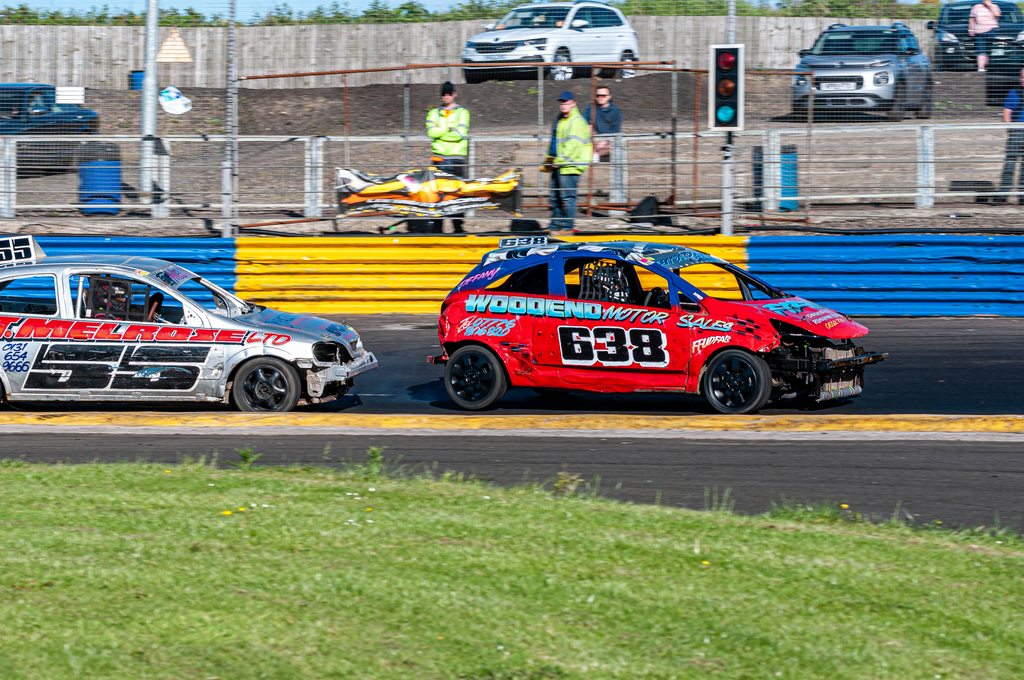 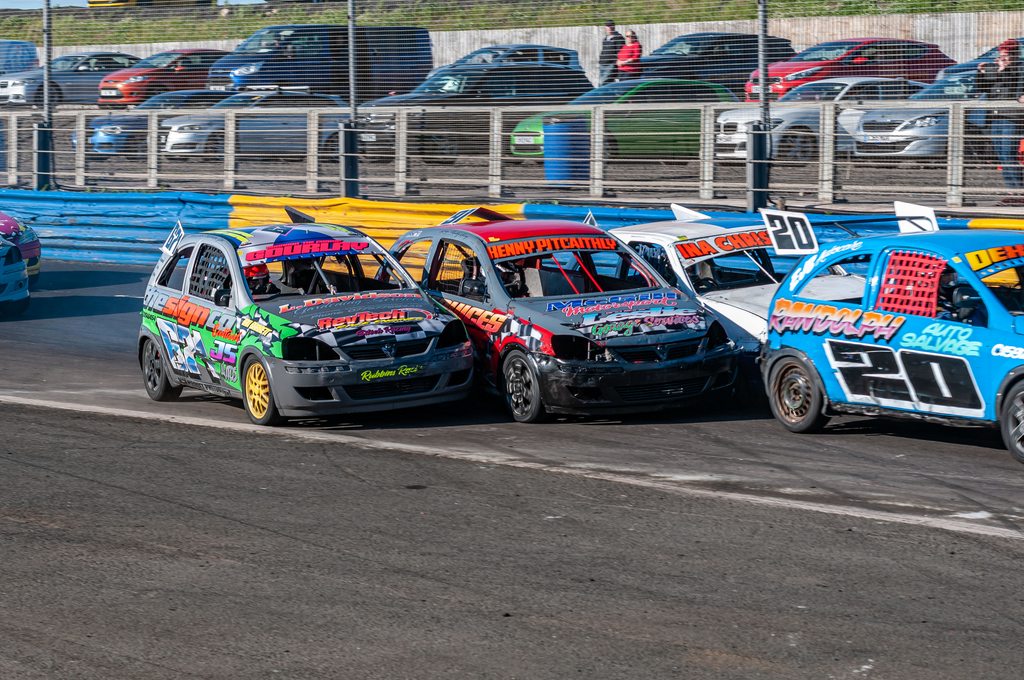 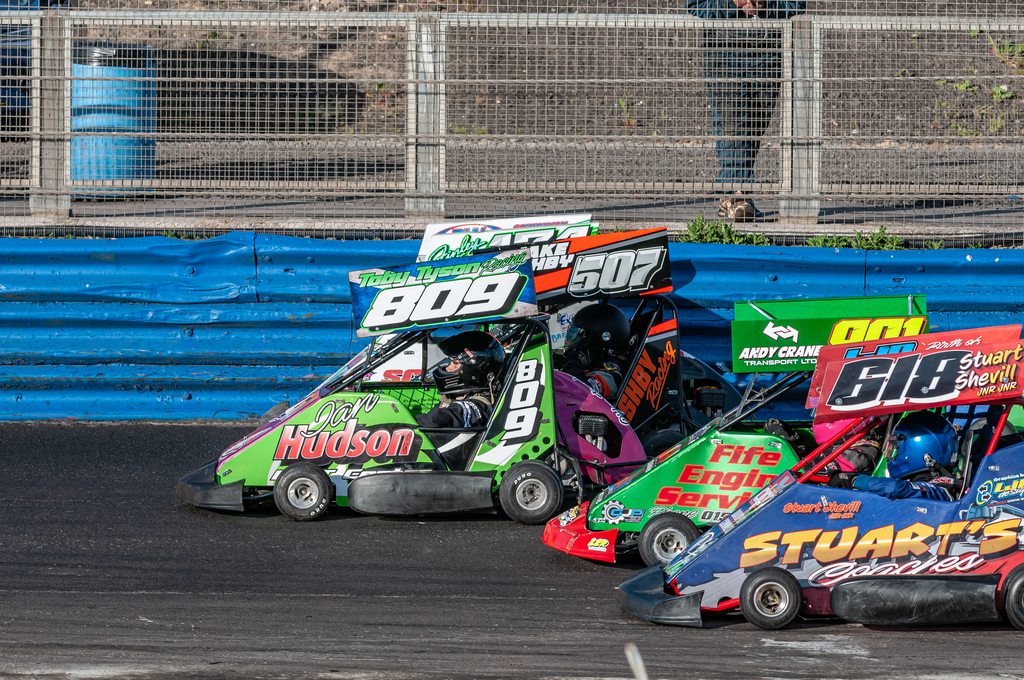 A dramatic end to the Ninja Kart European Championship on Saturday night at Lochgelly Raceway seen the front runners at the time crash out of contention as Toby Tyson sealed victory at the death!

The Ninja Karts seen 30 drivers participate on the night, with a last chance qualifier race taking place at the beginning of the night. Jack Connor quickly took the lead of the race and opened up a substantial gap to the drivers behind, before a loose chain seen him slow down dramatically over the last 2 laps. This failure enabled Caelan Grant to close the gap significantly over the last couple of laps and very nearly overcame the Connor kart out in front – as it was though, Jack Connor held on for the win, with Grant finishing second, and Layton Cairns in third position. 2 reverse grid heats would follow the last chance race with the qualifiers battling it out for the chance to start at the front of the grid in the main race – sponsored by McAlpine Auto Sills, with KN Transport putting up a prize for the winner as well! Southern driver Finley Kew drew pole position for the first race of the night and looked set for victory before spinning around after tangling with a back marker which would drop him back the field with him finishing in 6th position. Alongside Finley on the front row of the grid was Cameron Mason – starting in his first major championship with the pack right behind him. Stuart Shevill Jnr started inside row 2, and showed good pace through the race, though was unfortunate to be spun out of contention mid way through the race. With a host of quick karts on the track, with many starting a little further back the grid it was Northern Irelands Leighton Hughes that came through to take the heat 1 win, ahead of Dougie Kidd and Toby Tyson. Heat 2 of the night seen the grid reversed, putting Kenzie Bell on the front row of the grid. Eevie Ford, Jake Ashby and Hamish Plenderleith were all in the rows that preceded – some of the favourites for the main race itself. Kenzie Bell took away an impressive flag to flag victory, with Hamish Plenderleith and Eevie Ford rounding out the top 3. With the qualifying heats over, the computer did its work and calculated the grid for the 2021 European Championship! Leyton Hughes was the driver who had top scored putting him on pole position, with Dougie Kidd outside him – Row 2 seen Hamish Plenderleith and Kenzie Bell. As the green flag dropped, there was a early incident which seen George Climo hit the wall on the opening lap of the race which resulted in a complete restart. With Climo out of the way, the karts reformed the grid and lined back up for a second take at the start. Finley Kew and Kenzie Bell both got lightning starts, with Kew in particular making up a number of places on the start. As the race settled down, an titanic five way battle for the lead of the race ensued; Kenzie Bell, Hamish Plenderleith, Dougie Kidd, Finley Kew and Leighton Hughes all diced for position at the front of the track with them all leading at some point throughout the race! With the laps running down, a dramatic twist would follow with just 2 laps remaining! The lead 2 karts, Plenderleith and Kidd spun around and with the following three karts just behind, the top five were more or less wiped out of the race, with Kidd being the only one to get away quickly before the yellow flag was called for as the drivers were all checked on. A delay in proceedings followed as the track was cleared with the sticken karts. This promoted Toby Tyson up into second place having been down the order before the restart! As the green flag dropped, it was Kidd who led the way though under pressure from Tyson. Tyson made his move going into the last lap and was up into the lead of the race in what is his final Ninja Kart meeting at Lochgelly Raceway before coming of age. Tyson took the victory much to his delight, with Kidd finishing in 2nd place, and Jake Ashby in 3rd. An excellent driver from the back of the pack, seen Clark Ferris bring his kart home in 4th place! What a race, and what a remarkable end to the Ninja Kart career of Toby Tyson!

The ProStock Scottish Championship was also on offer on the night! The ProStocks always put on a show here at Lochgelly Raceway, and Saturday night was no different. A grid draw took place prior to the first race, which would see 2 reverse grid heats formed to provide the grid for the 2021 Scottish Championship – being defended by Lochgelly driver Darren Rae. Martin McCafferty drew pole position for heat 1 of the night, with Paul Winfield alongside him. John Mason and Ian Christie started on row 2. As the green flag dropped, Paul Winfield got away quickest and quickly opened up a lead in the race. With the cars behind jostling for position, Ian Christie and John Mason found themselves in an excellent battle for 2nd position behind Paul Winfield. Heat 2 of the night seen defending champion Darren Rae start on pole position, with Mark Boyle alongside him. Behind them were National Points Champion Tam Melrose and Jason McAlpine. Heat 2 of the night seen a superb battle between Darren Rae and Tam Melrose as the jockied for position – lap after lap, they traded hits, swapped positions, providing a battle you had to keep your eyes on. With a few laps to go, Rae got the break of Melrose and managed to put some day light between the 2 cars battling it out. Rae took the win, with Melrose finishing in second, and Jason McAlpine in third. The Scottish Championship race was another entertaining affair, however, with Melrose failing to start the race, Darren Rae would start as the favourite and quickly showed his worth as he opened up a lead to the pack behind him. Ian Christie and Jason McAlpine put in a good showing as they battle for 2nd position on track, with Fleming, Boyle and Winfield all lurking in the wind. It was Darren Rae who held on to take the 2021 ProStocks Scottish Championship, with Christie and McAlpine rounding out the top 3.

The CC Rods were out in action for the first of 2 meetings in succession and with another healthy field of cars on track, we were in for some super racing throughout the night. Kevin Hutchison was the star of the show as he swept to a hat trick of race wins on the night. With a closely matched field of cars, a lot of racing took place with cars side by side as they battled to overcome each other. Emma Kirk held a solid and steady inside line throughout the night as she made the others work tirelessly for position as they tried to overtake her. Emma held her nerve, and held on well throughout as she ultimately took away 3 top 4 positions on the night, including a 3rd place in the meeting final. Ian Donaldson continued his good form as he showed good pace from the blue grade, though was a little to eager at times as he fell foul of a docking or 2 throughout the night. Lee Wotherspoon had a big moment at the start of the meeting final as he found his car airbourne at the end of the back straight after a coming together with Ian Christie!

The Superstox were the fourth and final formula in action and as always – provided some great racing. Bryan Forrest was the one to beat though, as he swept to a hat trick of race wins on the night. Dean Johnston got quicker as the night went on, and looked to have the pace to challenge Forrest come the meeting final had it not been for Forrest getting a couple of breaks in the traffic quicker than the 446 pilot. Lee Livingston and Jack Turbitt both put in strong performances from the yellow grade, with Turbitt coming away with a hat trick of top 3 positions, as well as a tyre courtesy of meeting sponsor Hoosier.

We are back in action this Saturday night with the Big Van Bangers taking centre stage, with the first race at 5pm! Join us then! 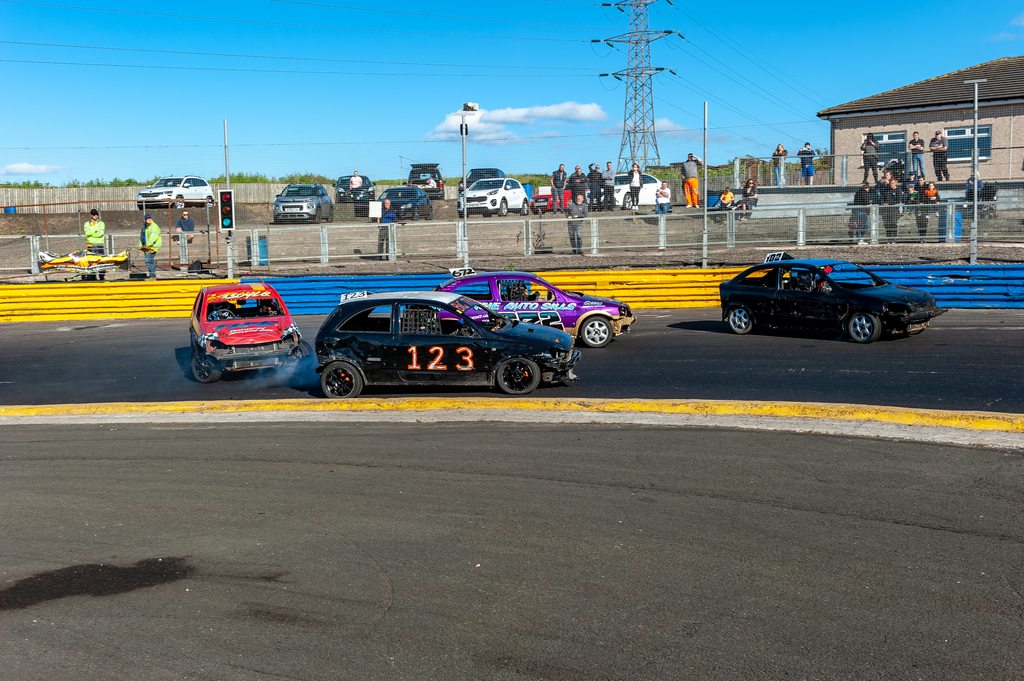