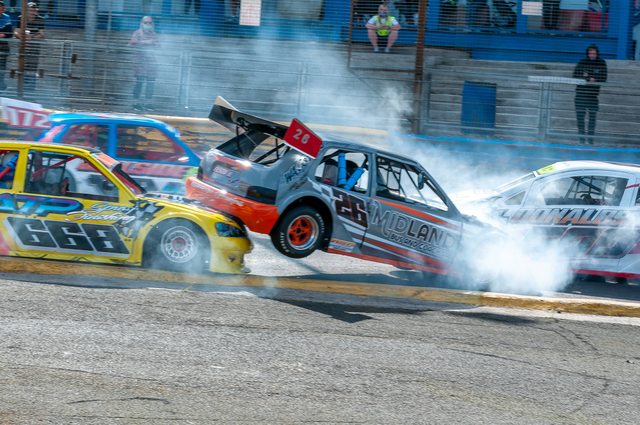 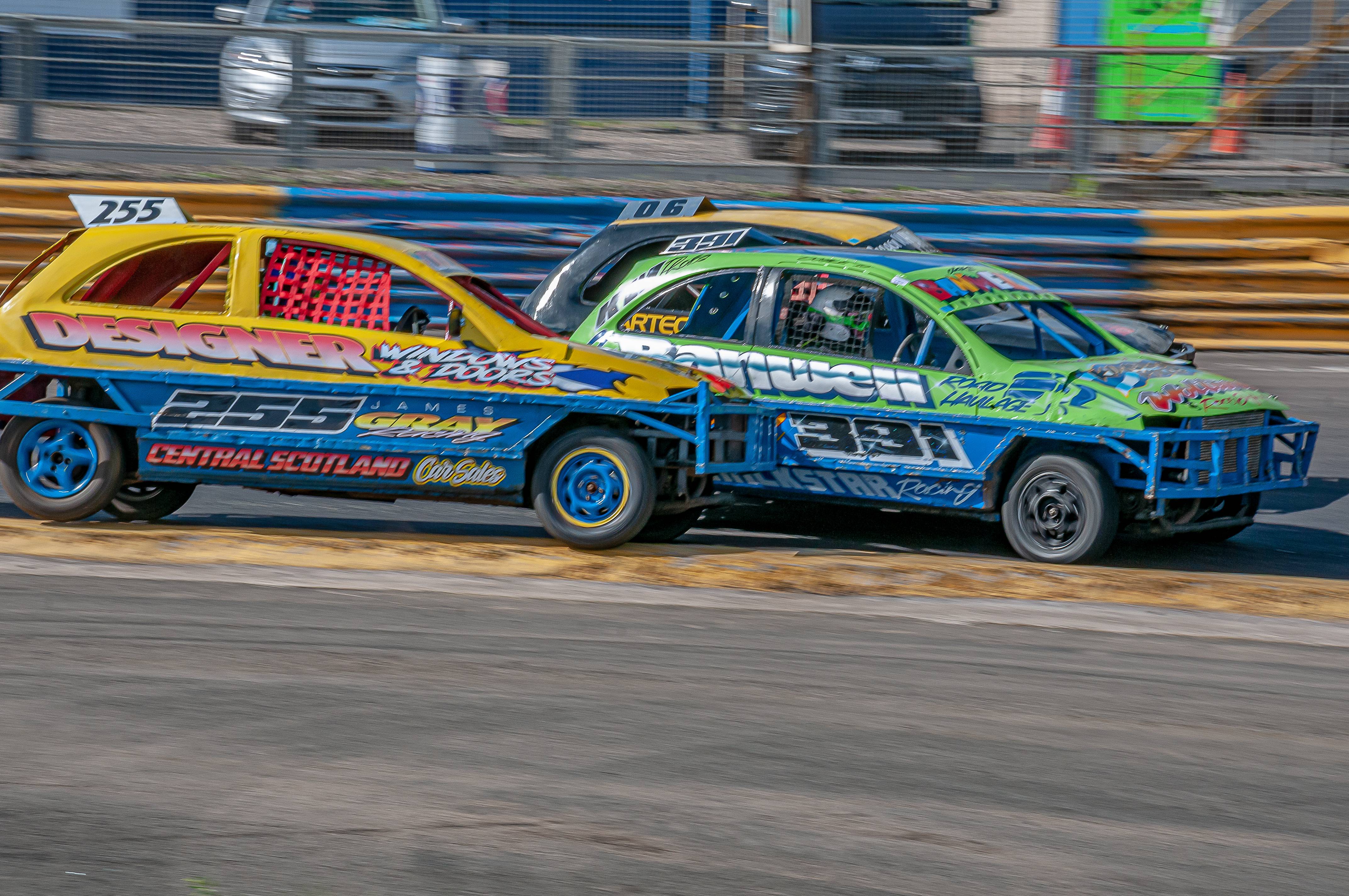 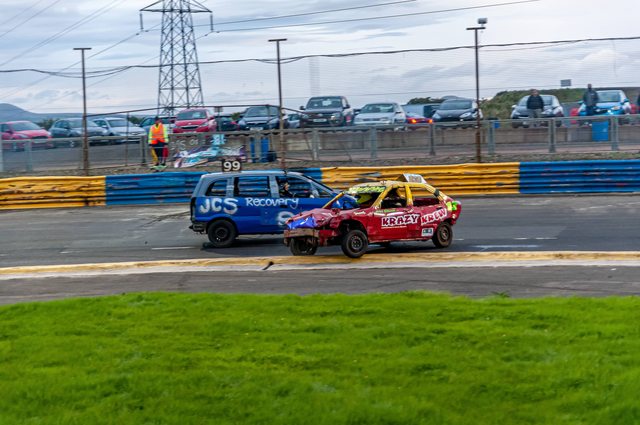 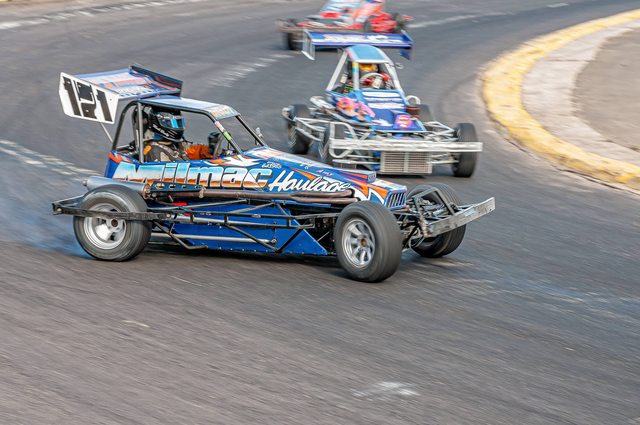 What an excellent weekend of racing at Lochgelly Raceway – Every formula worth watching in some glorious September sunshine!

A weekend that had it all – on track battles, rivalry, fast racing, head on collisions, fires and handshakes.

The Superstox kicked off the weekend with the opening race on Saturday with visiting drivers in the form of Lee Davison and Bradley Brooker. Bryan Forrest made his race debut with a zetec powering his car instead of the pinto engine and it was right on the pace from the outset as he took a heat and final double. Northern English driver Mark Dews showed great pace as well, as he took a much-deserved race win in one of the heats, as well as finishing 2nd in the other. Barry Stephen showed of his new livery for the first time on home soil, and what a well turned out car it is! The Sunday afternoon was another excellent day for the open wheel class with a great showing of competitive and fast racing. Bryan Forrest was again quick, however, seemed to have a few issues with his car, having 2 DNF’s as a result. Marc Spence took the opening race win in the Ryan Dunbar car ahead of Evan Clark and Barry Stephen. Forrest took the 2nd heat of the night, in a relatively comfortable manner ahead of Stephen and Lee Davison. The meeting final seen Mark Brady take an excellent race win, with Mark Dews and Dean Johnston completing the top 3.

The Ministox, as always here at Lochgelly Raceway, provided excellent entertainment. Scott Allardyce was in superb form as he now seems to have overcome his problems from a few meetings ago. Racing from red grade, Scott took a superb double heat win on Saturday, before failing to finish in the meeting final. Robbie Armit neatly weaved his way through the traffic in each of his races on Saturday, consistently finishing in the top three positions in each of the races, that will seem him maintain his challenge for the Lochgelly Raceway track championship. Koddi Wright made his debut in the ex Mitchell Gold car and was immediately on the pace! Taking a 3rd place finish in his first race was an excellent achievement – It won’t be long before we see Koddi moving up through the grades! Charlie Hardie completed his first meeting having adopted the silver stripe for the month of September, and took a 2nd place in the 2nd heat of the night, and took an excellent win in the final after a mouthwatering battle with Lewis Burgoyne and Robbie Armit. Burgoyne led the way before being chased down by Robbie Armit, with the paid of the dicing for position, it allowed Hardie to close the gap and get into the battle. Hardie managed to get in front, but was continually pressured by Armit and Burgoyne behind, and with the last corner in sight, the cars launched into the corner, with the three drivers crossing the line within a cars length of each other – Hardie, Burgyone and Armit (Three names with many titles amongst them in the history of the sport!!). The Sunday afternoon was another excellent outing for the junior class. Koddi Wright excelling again, with what could have been a hat trick of race wins but for being docked in the 2nd race of the day after starting in the wrong grid position. Koddi took the opening race, finishing ahead of Robbie Armit and Max Walker. Sam Cavanagh took his first win of 2020 in the 2nd race of the night, inheriting it after Wright’s demotion, with Armit again finishing 2nd and Wright down to 3rd. The meeting final seen Charlie Hardie and Lewis Burgoyne battle again, this time for 2nd place as neither of them could catch up with the flying Koddi Wright. All in all, a superb weekend from the Ministox, a formula that will not be back out in action at Lochgelly until the 26th September!

The 1300 Stock Cars were arguably the formula of the weekend with nothing less than excellent racing from start to finish – 32 cars started the first race on Saturday night, and 26 cars started the last race on Sunday afternoon. Credit must go to the drivers and race teams for keeping the vast majority of cars on track throughout the weekend. With cars spinning and battling throughout the weekend, the gasping spectators didn’t know where to watch with action around the raceway in almost every race! The opening race of the weekend for the 1300 Stock Cars seen Kyle Hegg take a race win from blue grade. Sean Naismith seems to have peaked at the right time in the class, as he looks to defend his Scottish Championship title at the next meeting for the formula, taking 2x 2nd place finishes on Saturday night, from the back of the grid. Englishman Jake Banwell got to grips with the Lochgelly Oval quickly and battled his way through the grid in each of his races, finishing in the top 4 in all three races on Saturday night. Graham ‘Ozzy’ Osbourne broke his duck in the formula, as he took a heat and final double win which will see him elevated a grade as a reward for his efforts! Throughout the meeting final, Patrick Calderwood made an effort to despatch of Dougie Ford, which resulted in both cars hitting the wall, with Ford spinning around, and Calderwood causing some damage to the front left of his car, which seen a yellow flag required to recover the car! The Sunday afternoon seen Fraser Clark race in a calm and collected manner, as he used the front bumper to good effect to come through the packed grid of cars and take the race win in the opening race on Sunday. Kyle Hegg got a 2nd place finish in a weekend that provided a decent points scoring haul for him, though, he may not be fully satisfied with his performance with the Scottish Championship just weeks away. Banwell took a hat-trick of 3rd place finishes to mark an excellent ‘Scottish Weekend’. Regan Watson seems to be enjoying his racing at the moment, with his performances reflecting that – Regan took a race win in heat 2 on Sunday, and looked on course for another strong finish in the meeting final, before his car caught fire and ended his day! Sean Naismith took the meeting final victory ahead of Clark and Banwell.

The Stock Rods were in action on Saturday night with a healthy 16 cars in attendance. Darren McAlpine was racing from blue grade for the first time in 2020 and looked the quickest he has been all season, narrowly missing out on the win in the final after making one mistake which National Points Champion Siobhan Martin pounced upon. Craig Mason took the first race win of the day for the formula ahead of McAlpine and Chris Lattka. Gary Nicholls though, will be kicking himself as he was on course for a race win before running out of fuel!! McAlpine took heat 2 ahead of the challenging Dean McGill and Siobhan Martin. The meeting final went the way of Martin, although McAlpine finished hot on her heels, with Stewart Paterson completing the top three.

The Rookie Bangers battled for their Scottish Championship on Saturday, which was won by Craig Royal in what was an English 1-2-3. The Demolition Derby turned out to be a good show, despite a lower number of cars in attendance than we would have hoped for. A dead heat was declared in the DD, after a big head on with Gav Fletcher and Dean Sievwright ended both of there cars!

The Sunday seen the 2.0 Hot Rods in action, in place of the Stock Rods, with Marc Honeyman not only taking his first win in the class, but the also his first hat-trick of race wins!! The 2.0 Hot Rods were in good form throughout the day, however, a big crash in the 2nd heat of the night was the talking point for many – Ian Donaldson getting out of shape and being collected by the oncoming John Campbell, with Kevin Stewart just behind as well – Campbell hit the kerb before hitting the Donaldson car, before then being hit by Stewart. Stewarts car somehow managed to get underneath the Campbell car flipping it over onto his side – a rare sight seeing a hot rod roll over! As the car settled though, a fire broke out, and it was a relief to see Campbell quickly out of the car and the HRP track team take control of the fire quickly.

The Micro Bangers replaced the Rookie Bangers for Sundays action, and provided some excellent racing and crashing throughout the day. Despite only having 16 cars in attendance, the Micro Bangers never fail to disappoint with lots of crashing, and lots of entertaining the crowd!

The Micro Bangers race for there World Cup here at Lochgelly Raceway on Saturday 10th October!