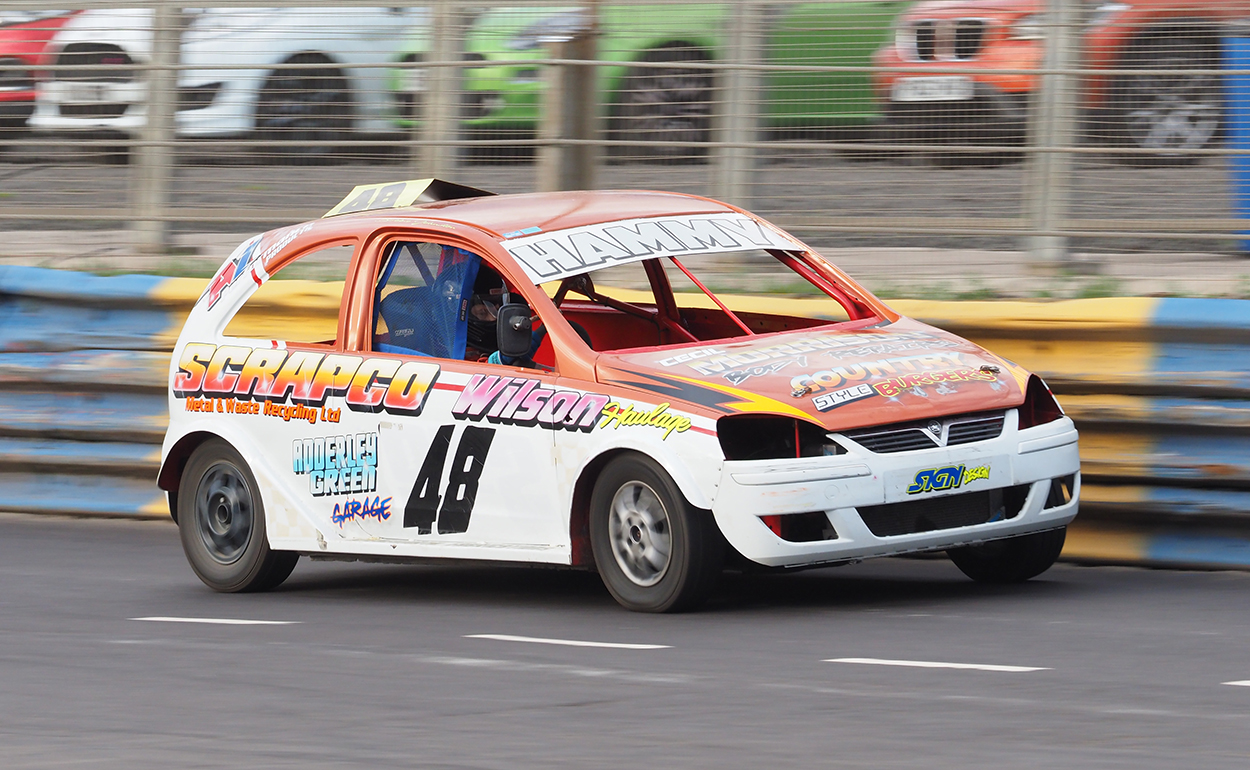 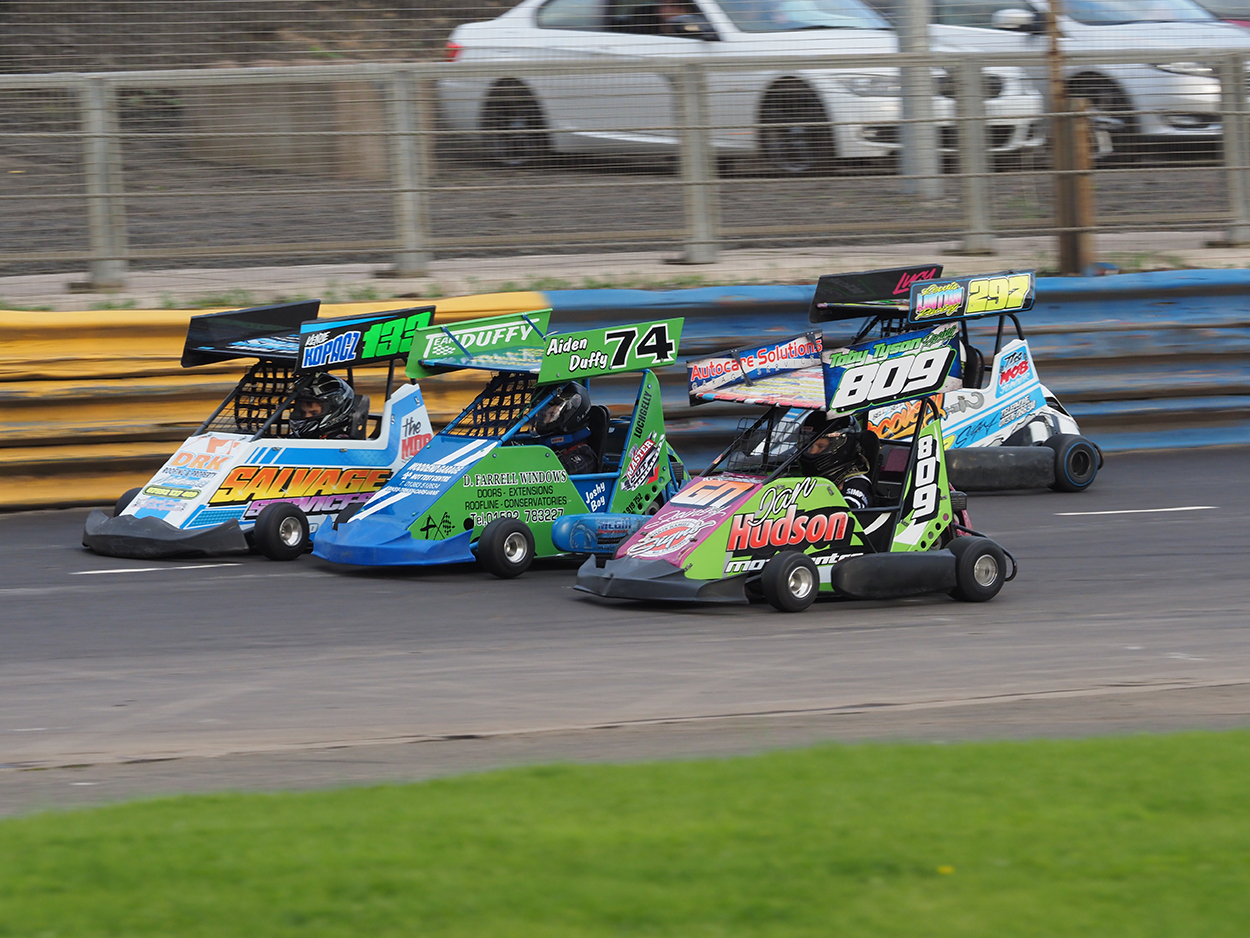 Wow, what an excellent night of Stock Car Racing we had at Lochgelly Raceway on Saturday 22nd August, an event that seen superb amounts of cars across all formula!!

For the third meeting in succession, trackside viewing was again sold out as the punters came along in there droves to get there weekly stock car fix.

A superb 25 Ninja Karts took to the track on the night, including 2 visiting drivers in the form of Jake Ashby and Finley Kew. A competitive field of drivers seen 4 different race winners on the night. The evening kicked off with the Ninja Karts whites and yellows race, a race that is on the agenda every time the Ninja Karts are on, to give the newer, inexperienced drivers an opportunity to race against drivers at a similar level, and gain track time, confidence and experience. Kal Wotherspoon started from the back of the grid in the race in what is only his second meeting, but came through the pack to take a confidence boosting win. Katie Lee Smart and Shaun Boyle took the further 2 podium positions in the race, with Stuart Shevill Jnr also putting in a solid performance in what was his best meeting to date in the class. The first heat of the night for the youngsters seen Scottish Champion Toby Tyson have a race to forget, as he got caught up and spun out a couple of times, dropping him back the order. Up front though, there would be no catching the flying Eevie Ford who drove her kart excellently throughout the evening, taking a superb race win, with Candice Smart and Isla Chisholm finishing just behind as the girls showed the boys the way! English visitor Finley Kew took an excellent race win in heat 2 after following Scottish Champion Toby Tyson through the pack before reeling in Toby in the closing laps and performing an excellent last lap overtake, which almost ended in disaster as the 2 drivers battled for the same piece of tar as they approached a back marker!! Both drivers made it safely around the corner with Finley just ahead of Tyson, with fellow Englishman Jake Ashby coming home in 3rd! The final race of the evening for the kids seen Eevie Ford again looking in excellent form, with the race seemingly set for an excellent finish as the star graded drivers chased down Eevie Ford, but for a yellow flag stoppage with just a few laps left after a hefty incident involving Lewis Linton, Kenzie Kopacz and Cole Ford. With the bunched up pack the likes of Toby Tyson and Finley Kew were right on the back bumper of Eevie. Tyson make amends from his earlier races, as he took an excellent race win, with Kew just behind and Hamish Plenderleith in 3rd position.

A mighty 30 1300 Stock cars were in attendance on Saturday, the highest number of cars on track in the formula for a domestic meeting, in approximately 5 years. From the outset, the bumper brigade put on a show, trading blows, lap after lap, with action around the raceway, throughout the night. Declan Lindsell had a big rollover on the back straight after being spun around, with all of the cars taking evading action to avoid the flying car of 834 Declan Lindsell!! Declan was quickly out of his car and had it back out for the forthcoming races! Brother Scott had a battle with Andrew Mathieson in the meeting final, with the pair exchanging hits, lap after lap, dropping them down the order in the process! It was 16 year old Jamie Stewart though, who again looked the quickest on track, showing some excellent maturity as he kept his head down and avoided a lot of the incidents. Starting from the blue grade, Jamie took a win in the opening race of the night, ahead of the ever improving Craig Warner, with track points leader Andrew Mathieson finishing in 3rd position. Heat 2 of the night seen Warner get away excellently from the white grade as he took a race win, just ahead of Stewart Aitken, who seen Iain Price have a hit at him in the closing laps. Ross Watters finished in 3rd position as he begun to find his feet again in the formula after some time away. The meeting final seen Stewart Aitken again finishing in second place – he’ll be beginning to think that victory just can’t be his!! The meeting final went down to the very last lap though, with Aitken, Dougie Ford, Ross Watters and Fraser Clark having a super last lap battle with the places changing around on the final corner after a combination of bumper work and different lines around the corner! Watters came out on top, with Aitken 2nd, pushed across the line by Fraser Clark! The final race of the night seen a closed grid, 10 lap dash take place. Regan Watson got away well and led for the first few laps of the race before being chased down by Jamie Stewart, who then took over proceedings at the front of the pack. A yellow flag was called for with a few laps remaining after a few drivers seemingly hit some oil and clattered the wall, with Craig Haxton seemingly coming off worst, losing a tooth in the process!! Stewart made an excellent start on the restart, with Ross Watters and Sean Naismith unable to make any contact on the back of the 188 car!

The ProStocks were in superb form from a spectators point of view, with 20 cars in attendance. A rollover, and a number of on track battles throughout the night seen a lot of action, but ultimately, a lot of damaged cars as well! The opening race of the night was no sooner on its way before a complete restart was called for after a coming together between Stuart Hall and Paul Winfield. With Winfield tagging a car in front coming onto the home straight, Hall was in the mix too just behind Winfield, and a combination of factors seen the 822 car flip over onto its roof with a red flag quickly called for! As the race got under way, a number of big hits ensued throughout, with Dougie Kidd planting a big hit on David Linton with a few laps remaining as Kidd fought his way through to the lead of the race to take the win! Graeme Fleming and Ross Stewart completed the top 3 in a race that seen only 7 finishers from 20 starters! The 2nd heat of the night continued in much the same fashion, with the hits continuing to go in. Tam Melrose latched onto the back of Jason McAlpine on the home straight, with John Jackson just ahead as well – Jackson came off worst being the front car, and pushed to the outside ultimately hitting the wall with McAlpine and Melrose in tow. With the momentum lost, and some damage to cars, McAlpine kept the foot down and closed up on Melrose on the back straight, taking a massive lunge to make contact with the rear quarter of the Melrose car, with both cars hitting the wall and sustaining damage, with McAlpine coming off worst. Ross Stewart took advantage of everyone elses misfortune as he took a race win ahead of Paul Winfield and Scott Jamieson. The meeting final was a little more tame as the car numbers deteriorated and it was Tam Melrose who took the win, finishing ahead of Scott Jamieson and Ian Christie.

The Stock Rods were the final formula in action, and they too seen some visiting interest in the shape of Maison Waugh and James Morris. Stuart Hamilton made his return to racing on home soil, taking a comfortable race win in the opening race of the night, with Paul Wilson finishing in 2nd and Morris 3rd. Stock Rodder Pete Thomson has been in the formula for a number of years on and off, and made his first outing since racing re-commenced, and took the win in the 2nd heat of the night for his efforts, with Morris and Waugh rounding out the top three. The meeting final seen a closed grid of cars with the top point scorers from the two heats at the front of the grid. Morris led the way from the outset, though was under intense pressure from Siobhan Martin, Brett Sneddon and Gary Dean behind. A number of blue flags were given to advise Morris to hold a line as the pressure continued to mount, with the race steward finally deeming that Morris failed to adhere to the instruction and removed him from the result, giving Siobhan the race win! It was an excellent race to watch from the front few drivers battling it out in such a manner!

This coming Saturday we are back in action with the Back 2 Basics Bangers, 2.0 Hot Rods, Ministox and CC Rods! Tickets can be purchased via hardieracepromotions.co.uk.