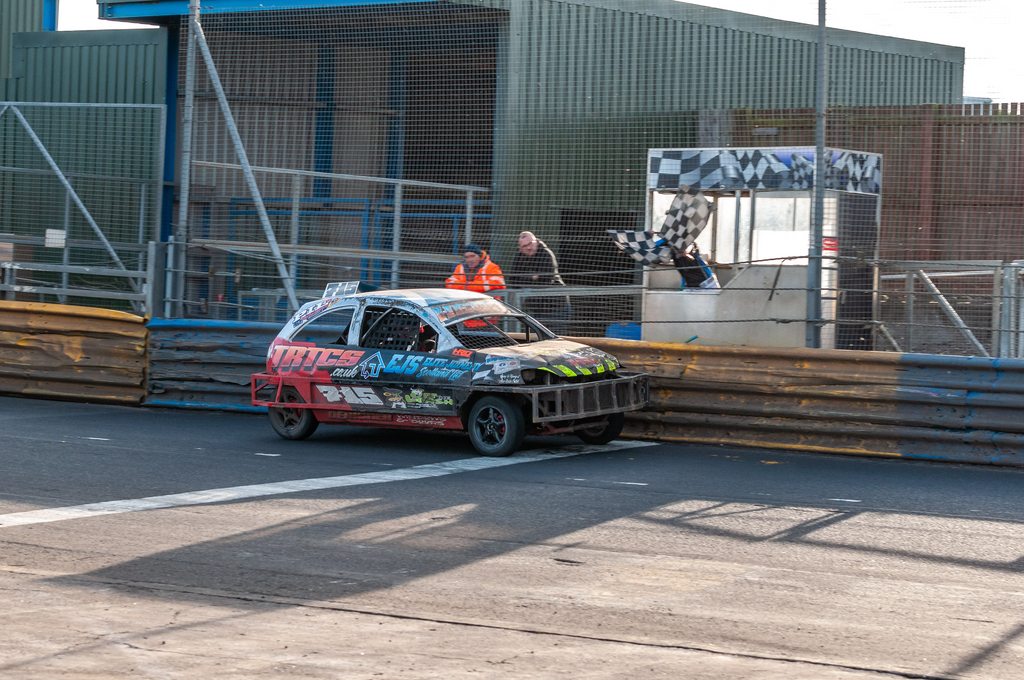 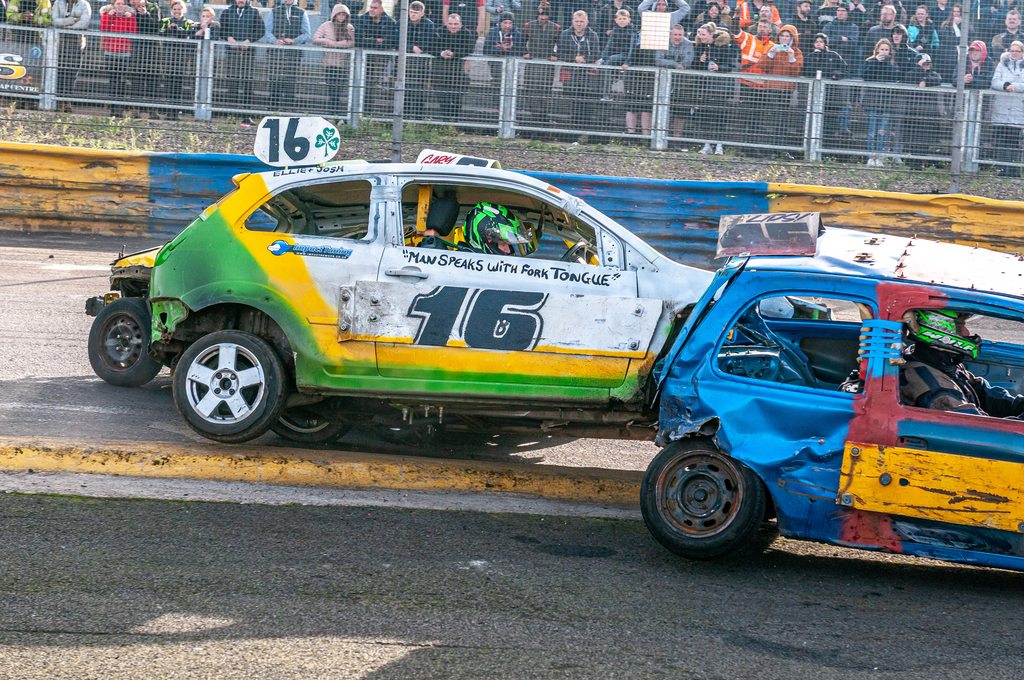 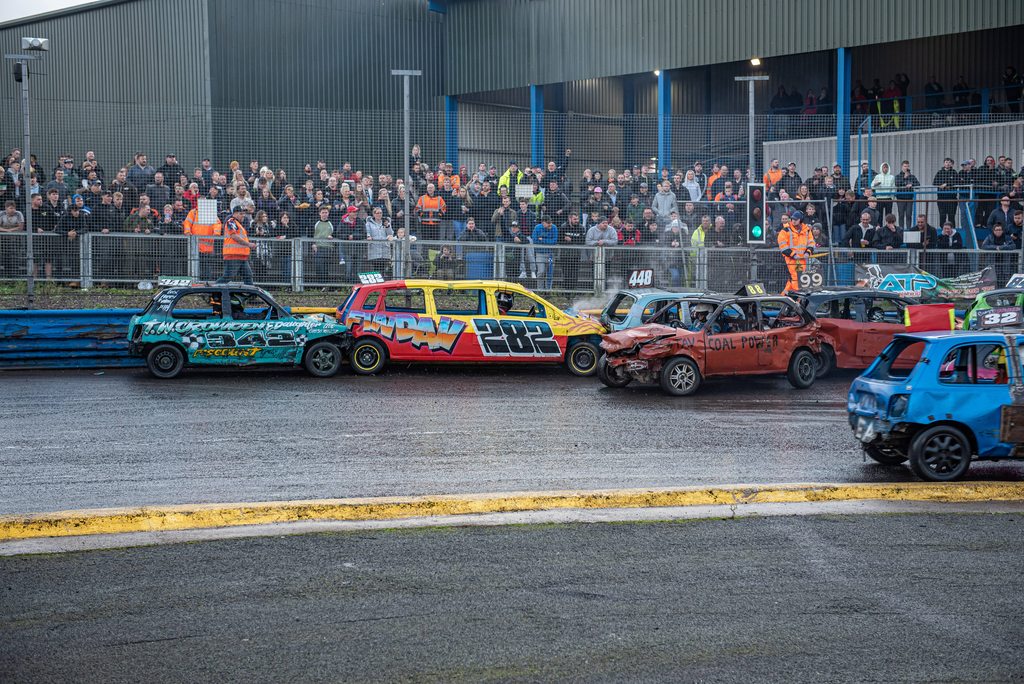 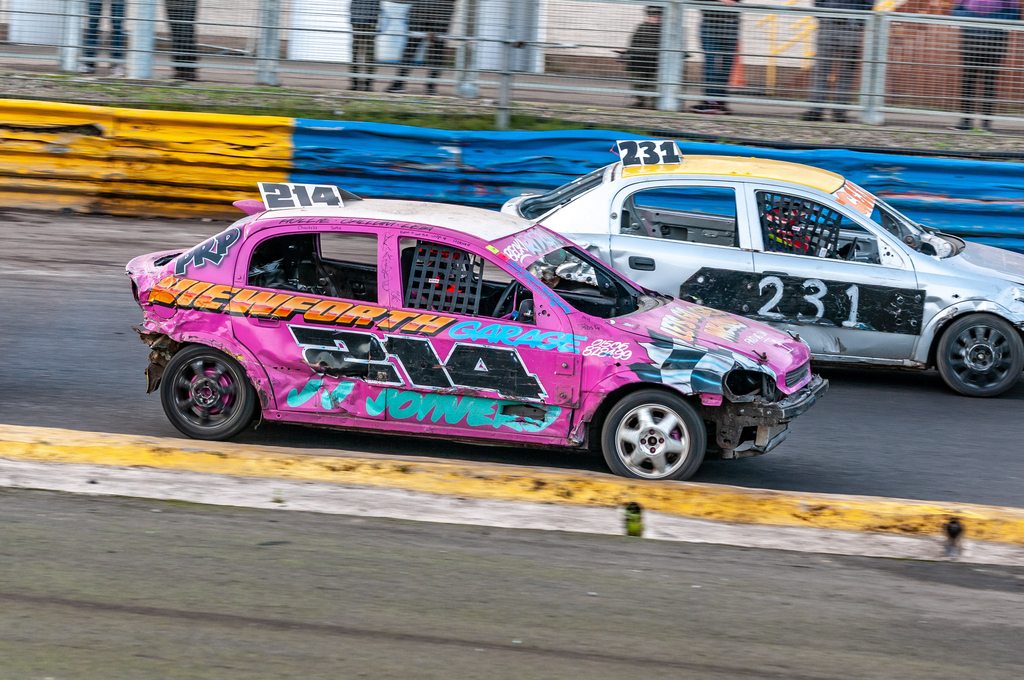 The final speed weekend of 2021 is now complete at Lochgelly Raceway, and it certainly was eventful, with plenty of action throughout the weekend – and a lot of wrecked cars as a result!!

The National Micro Bangers topped the bill as they raced for the 2021 Micro Banger WORLD CUP on the Saturday night, and with around 70 cars in attendance, it was a non-stop weekend of action. The weekend started off with a last chance race for those that had not qualified as one of the seeded entrants, with 10 cars qualifying for the main race. Around 30 cars took to the track in the battle to become one of the few that would make it through.. and in the end, it went down to only those finishing that would go through – such as was the action throughout the race!!! Only 10 cars completed the distance, with Robert Ryan leading home Will Morphey and Jake Stewart. The World Cup race was the 2nd race of the day for the Micro Bangers, and with an Incarace draw determining the grid, it could have been anyone on pole position. Just over 40 cars took to the track as the drivers began the battle of determining who would be crowned the World Cup winner of 2021. As the lets went green, and the pace car pulled off the raceway, the action commenced – turns 3 and 4 were soon littered with cars spun out, stricken and ‘caged’! It wasn’t long before turns 1 and 2 were looking similar with a few big hits at the race control end as well. A superb drive from Michael Byram would ensure that the title yet again, went south of the border, with HRP registered Matt MacFarlane finishing in 2nd place, ahead of Connor Byram in what turned out to be a successful race for the Byram clan. A special mention must also go to qualifiers from the last chance race, with Robert Ryan and Jake Stewart both battling through the pack, and surviving the chaos, to finish 4th and 5th respectively! Two all comer races would follow the main race on the Saturday night, with only a handful of cars finishing each race!! Northern Ireland’s David Gurney would win the first of the 2 all comers races, with northern Scotland driver Joe Yeats being the only Scottish race winner of the weekend, as he held on to win the 2nd all comers race on the Saturday night. The Sunday afternoon seen just under 40 cars in action – a little down on the Saturday, but a great effort nevertheless considering the damage to some on the Saturday evening! The Scottish Championship started off the day for the Micro Bangers. A few big hits, a few big piles ups, and a near track blockage later, and there were less than 10 cars left running by the mid-way point in the race, with Jake Stewart reigning victorious!! Andy Armstrong swept to a double race win in each of the following all comers races, before David Gurney won the DD to round off an excellent weekend from the Micro Bangers!! Former World Cup winner Joey Reynolds was in the mix of things throughout the weekend, and aided in providing an the onlooking spectators some excellent entertainment! Lee Clarke put in a massive hit on Charlie McKenzie, with the resultant driver being a little worse for wear afterwards! Lee Moore and Norman Moore both made their first outings in almost 2 years, and both drivers were in the thick of the action, taking home a couple of squashed cars as a result! The Micro Bangers are back with us on the 13th November, with a team meeting taking place as well as the annual Caravan Carnage event on the same night.
The Junior Productions had 2 excellent days of racing with the Scottish Open Championship and Fife Championships on offer over the 2 days. With an influx of Northern Irish drivers in attendance there was a record number of cars racing for the formula at Lochgelly Raceway. Saturday night seen the Open Scottish on offer, with 2 graded races determining the grid for the Open Scottish race. Heat 1 of the night went to Lennon Grant, with Northern Ireland’s Mathew Weir finishing in 2nd place, and Koddi Wright in 3rd. Heat 2 of the night seen James Slater secure his first win in the formula, much to the delight of the youngster, whilst Jack Morrow and Kyle Rogerson rounded off the top 3. The meeting final seen the grid lined up based on the points scored in the previous 2 races. Up front, a great battled ensured with Lennon Grant and Mathew Weir battling it out for the best part of the race, before Mathew moved up into the lead of the race to win the 2021 Open Scottish Championship title. Grant held on for 2nd place, with Koddi Wright finishing in 3rd. The Sunday afternoon seen a similar format for the heats, but with the Fife Championship lining up in points within grades order. The Sunday afternoon was dominated by Northern Irelands Jack Morrow, as he swept to an excellent hat-trick of race wins, ensuring that both titles went over the Irish sea! There were some strong performances from some of the lower graded drivers over the 2 days, with 900 Kaitlyn Smart standing out in what was one of her best meetings in the formula. Kyle Rogerson and David Dignan also performed strongly over the 2 days, whilst Lewis Dickson didn’t have much luck, but showed good speed, particularly on the Sunday afternoon!

The 1300 Stock Cars raced over the 2 days for the Lochgelly Masters, with the five previous races determining the grid for the final race of the weekend for the bumper brigade, the Lochgelly Masters. Heat 1 of the weekend went the way of Patrick Calderwood, as he battled superbly from the back of the grid to finish ahead of National Points Champion Kyle Hegg. Scott Galbraith made an excellent debut in the class, finishing 3rd in both of the heats on the Saturday evening!! Barry Jarman won the 2nd heat, with Hegg 2nd and the aforementioned Galbraith in 3rd place. The meeting final seen the cars lined up in graded order on the Saturday, and there would be no catching Mitchell Gold – who dominated the race from start to finish and never looked like being caught. Further back the grid, there were some excellent battles going on amongst the star and blue graded drivers as they jockied for positions. Calderwood and Hegg would be the two that came through quickest, as they took 2nd and 3rd places in the meeting final. Sunday afternoon seen a further 2 heats take place, with Scott Galbraith continuing to shine, as he took a double heat win as a result of his efforts. Fraser Clark brought his car home in 2nd place, whilst Craig Haxton completed the top 3 in heat 1 of the Sunday afternoon. Scott Lindsell managed to secure a 2nd place finish in heat 2, with Hegg again in the top three. The Lochgelly Masters race would see the cars lined up in points order and as the green flag dropped, the closed grid of cars battled hard for the lead of the race in the opening laps. Galbraith and Hegg would find themselves pushed out wide on several occasions, with Danny Whyte and Euan Mathieson being the main culprits. Patrick Calderwood was in amongst the action as well as Craig Haxton as the top 6 drivers diced superbly for the lead of the race! Kyle Hegg would eventually break clear, but Danny Whyte put in an strong performance in 2nd place, before being overcome by the quick moving Euan Mathieson car with only a few laps remaining. It wasn’t to be over for Whyte though, as he managed to follow the Mathieson car closely in the remaining laps, before striking a hit on the 125 back bumper as he stole 2nd place on the line! Hegg took the excellent inaugural Lochgelly Master race from Whyte and Mathieson!

Junior Bangers featured on both Saturday and Sunday, in a guest appearance north of the border for the formula. A few Scottish drivers took to the track including Lochgelly regulars Rian Mitchell and Koddi Wright. Harvey Webb dominated proceedings throughout the weekend, as he swept to 6 out of 6 race wins for the Junior Banger formula!! The youngsters put a few big hits in over the weekend, with a few cars trailered, and a few more destroyed as a result of the action, meaning only a handful of cars survived for the Sunday afternoon.

The ProStocks joined us on the Sunday afternoon, and provided some really good racing. Three different race winners were the result of some good quality, competitive racing. Robert Conway took the opening heat win, with Darren Rae claiming heat 2, before World Cup winner Ian Christie took the meeting final. There was an impressive display from Becki Ritchie as she led and battled gallantly for each of her positions. The ProStock formula have a couple of more outings at Lochgelly Raceway on the 6th and 13th November, before the season is wrapped up and the planning for 2022 resumes!

We are back in action at Lochgelly Raceway this Saturday evening, as the National Hot Rods return to Lochgelly for the first time since mid July, whilst the ever entertaining CC Rods and UKMC Ninja Karts also join us. The 2.0 Hot Rods will also be in action, whilst the final formula is to be confirmed. Racing will start at 5pm, as the Ninja Karts battle it out for the JusBounce shield. 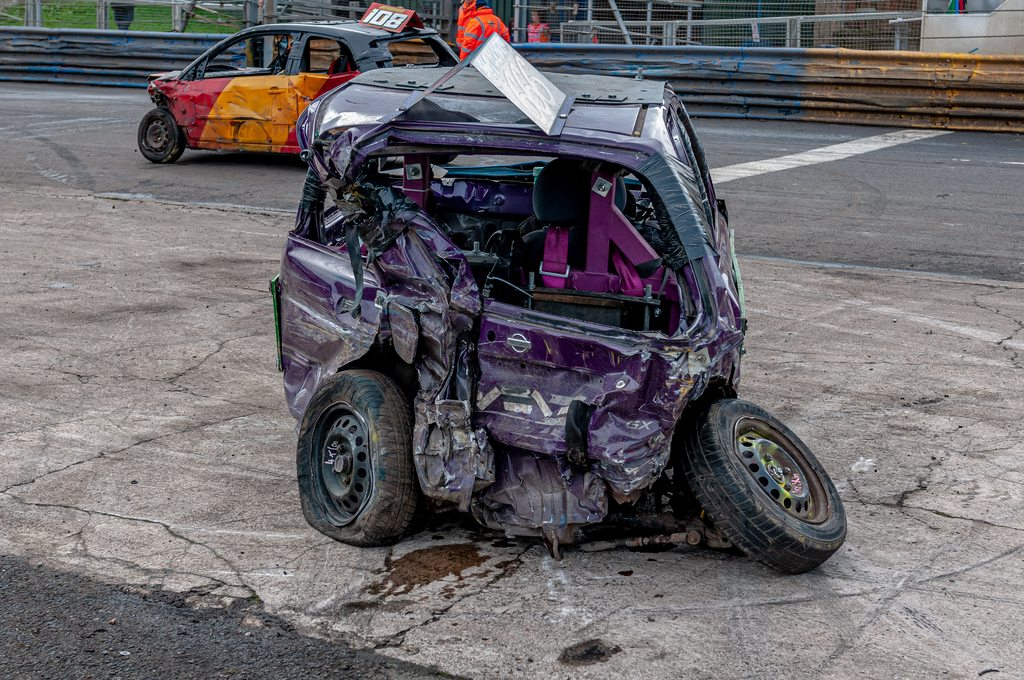