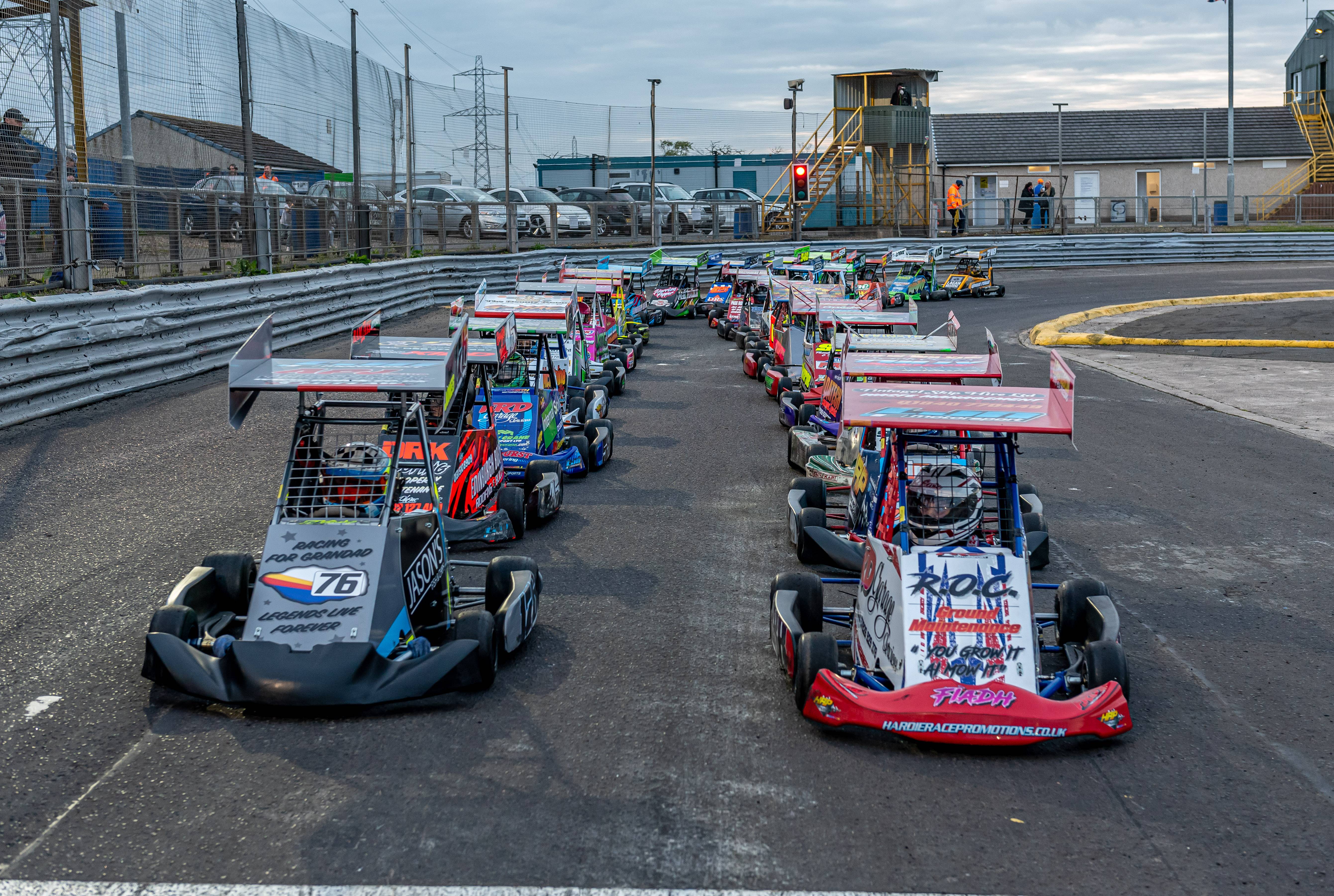 What a superb night of racing at Lochgelly Raceway on the 7th May. It had everything. Brilliant non-contact racing, oohs, aahhs, rollovers and more!

The Ninja Karts (Sponsored by Jason’s Fish & Chips) were the headline attraction as they contested the 2022 British Championship, with additional sponsorship also coming from KN Transport. Just under 40 karts took to the track on the night, with 28 already having qualified for the British Championship, and the others having a couple of races that would see a further 2 karts join the back of the British Championship grid. Calvin Courts dominated the 2 non-qualifier heats, which would put him on pole position for the ‘B Final’, the race that would see the top 2 drivers qualify for the main event. Courts looked to be away and clear in the B Final as well, before a kart spun in front of him, with Courts unable to avoid it, it caused some damage to his kart and resulted in the back bar being pushed into his rear tyre, slowing his pace, and dropping him down the order and out of contention. Rayah Burns was unlucky not to make the main race, finishing in 3rd position in all three races, the 2 heats and the B final as well. Layton Cairns and Mathew McIntyre would be the 2 drivers that qualified from the B final, and into the main British Championship – much to both drivers delight! The main heats for the pre-qualified drivers would see the grids determined from a grid draw pre-meeting, with the grid reversed for the second race, with the points from the 2 heats determining the grid for the British Championship. Heat 1 would see Jack Jones lead home Eevie Ford and Dougie Kidd, though a couple of penalties would see a revised top three of Jack Jones, Dougie Kidd and Murray Hall. The reversed grid for heat 2 would see Eevie Ford claim victory, in what was her final Ninja Kart meeting before moving on into Ministox. Stuart Shevill Jnr finished 2nd, and Max Taylor in third place. A 30 kart grid would then be formed for the British Championship, which seen Eevie Ford and Jack Jones line up on the front row, with Shevill and Kidd on row 2. A stop start race would see a lot of action, and several yellow flags, including a stoppage following a massive rollover from Dougie Kidd after hitting the infield kerb having looked to move up the inside of Kenzie Bell. Kidd took off and barrel-rolled a couple of times before landing on his wheels and partly driving off, whilst the other karts swerved and spun to avoid him! With several karts out of the race, the grid was re-formed in race order. Eevie Ford and Jack Connor were up front and led the way, with Eevie battling to hold off Connor behind. A spinning kart would see Eevie get caught by it, causing some damage to her rear wheel, allowing Connor to take over the lead of the race, and Ford into an unfortunate retirement. Kenzie Bell followed Connor across the line, with Clark Ferris and Ollie Gould taking third and fourth positions in what was a truly remarkable race from the youngsters.

The 1300 Stock Cars again seen 20+ cars take to the track and provided some great action throughout the night – including a massive rollover for Charlie Henry, whilst Blair Robertson also had a rollover. Hire car pilot Keith Annandale also found some air time, though found himself nearly on the infield banking having been spun on the back straight, before hitting the infield armco and going airborne. Blair Robertson, racing for the first time from red grade, didn’t look out of place, and found himself in the lead of the opening heat with several laps remaining. Fraser Clark did catch Blair in the closing stages to take the win however, though Blair held on for an excellent 2nd place finish, with Northern Irish visitor Chris Hamill finishing in 3rd position. Heat 2 of the night seen Blair go for a roll midway through the race, resulting in a yellow flag stoppage. Fraser Clark looked to be the one to beat again as he battled his way through to the front of the pack, before an issue arose in the closing stages dropping him down the order. Hamill would take the victory, with National Points champion Kyle Hegg finishing in 2nd and Danny Whyte in 3rd. The meeting final would see another great race, with Chloe Baird racing away in the early stages of the race, before being caught by the pack with only a couple of laps remaining. Hegg, Clark, Hamill, Robertson and Gregor Whyte all battled for the best part of the race, with positions traded regularly, and some big hits going being put onto each other in the closing laps. Hegg would take the win, with Clark finishing 2nd, before Hamilly crossed the line in 3rd position.

Bryan Forrest made a return to action the Superstox, and was back to winning ways as he took a race win in the opening heat of the night, whilst Dom Currie made his debut in the formula. Scottish Champion Aaron Riddell had a go at Bryan Forrest on the last corner having reeled him in the closing laps, and made contact with the 309 car, but it wasn’t enough to dislodge Bryan from the lead of the race, though did almost cost Riddell 2nd place, as Dean Johnston closed up sharply as they crossed the line. Heat 2 of the evening seen Johnston return to winning ways, as he chased down early pace setter Charlie Santry. Kenny McKenzie would round off the top 3, whilst Forrest seemed to struggle for grip in the latter part of the race. The meeting final would see a similar end result, as Dean Johnston took another race win, with Santry again finishing in 2nd place. Aaron Riddell would take third, ahead of Kenny McKenzie and Bryan Forrest. The Superstox are back with us this Saturday night.

The Stock Rods seen a few cars missing, though that didn’t hamper the night’s racing, with the formula producing three excellent races, with nothing given between the drivers, though they all produced some excellent racing with little to no damage as a result. Brett Sneddon made his season debut, and would be delighted with how it turned out – a hat-trick of race victories that will see him promoted to red grade for the next meeting. Brett held off the pack superbly in each of the races, but the performance in the final was a great watch. Right from the offset, Brett was under pressure from those behind him including World Champion Siobhan Martin. Siobhan tried the outside line for much of the race, but was unable to make it stick as Brett had enough speed and experience to hold an excellent inside line. Martin would take 2nd place in the final, with Chris Lattka, Darren McAlpine, Gary Dean and Sammy Pate all following on within a couple of car lengths.

The Ministox were the final formula in attendance, and there was yet another rollover – this time for Nicole Allardyce. Robbie Armit took the win in the opening race of the evening for the formula, disposing of Charlie Hardie on the last lap with Hardie then failing to finish. Jake Wilson and Lewis Burgoyne would complete the top three places behind Armit. The second race of the evening would see Hardie take victory, overcoming Dean Heeps in the closing laps, with Wilson again finishing in the top 3 places. The meeting final would see Hardie and Armit come to blows, with both drivers dropping down the places as a result, despite having been battling for the podium places. Lewis Burgoyne was in great form, and never looked like being caught by anyone though, and took a superb win, with Wilson finishing second, and Cole Ford taking an excellent third place finish.

We are back in action this Saturday at Lochgelly Raceway (14th May), with the National Hot Rods, 2.0 Hot Rods, CC Rods, Junior Productions and Superstox all in attendance. Join us for a 5.30pm start time.