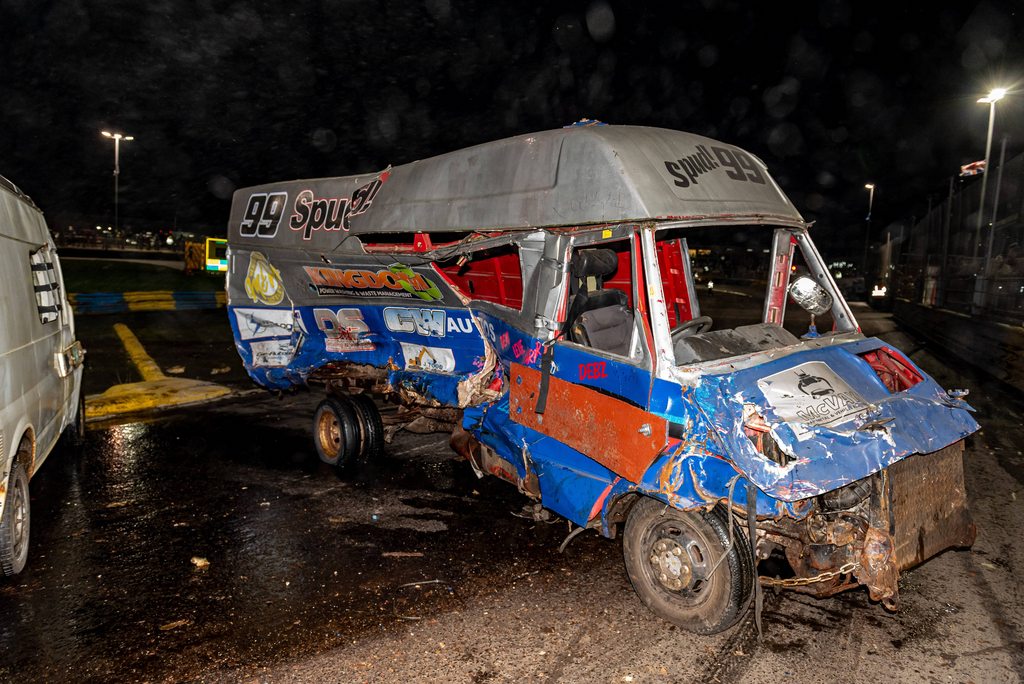 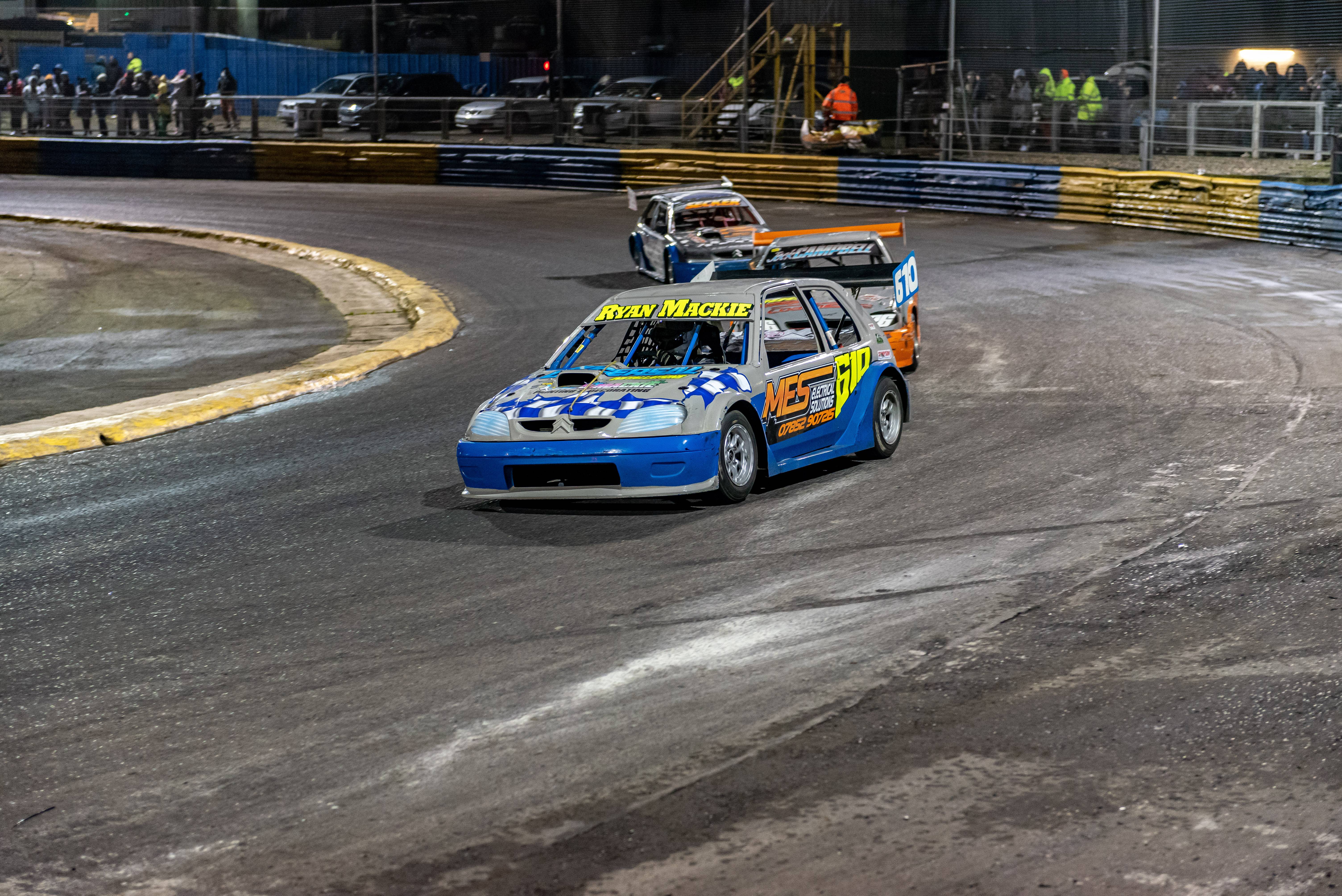 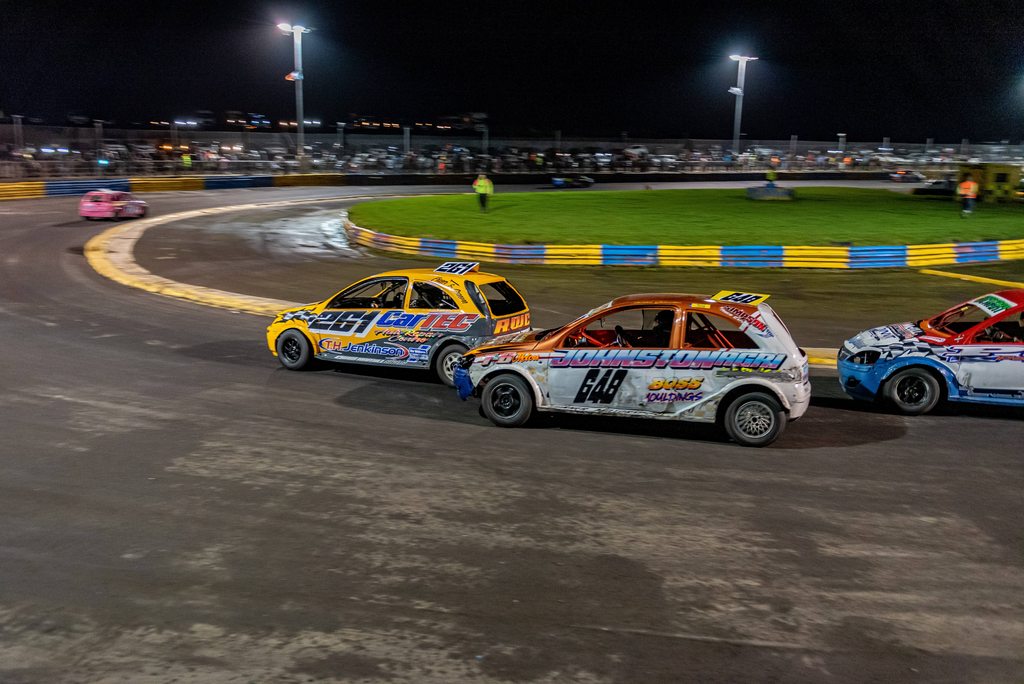 It was the final meeting of the season for a number of formula on Saturday night, with a few points championship’s sewn up along the way. The Superstox class seen Bryan Forrest awarded with the track points shield yet again, although, Dean Johnston put up a good fight and only finished narrowly behind! In the Stock Rod class, Darren McAlpine secured the track championship, whilst in the 2.0 Hot Rods, youngster Cameron Willacy added the track championship to his list of accomplishments throughout 2021.

The racing itself was full of excitement, with a slippery track to contend with throughout the night, it made for some interesting racing!! The Superstox battled bravely throughout the night, with debutants Craig Mason and John Downs finding the track conditions more alike an ice rink than a tarmac oval! Dean Johnston and Mark Brady were the two drivers that came away with race wins on the night, though, Lee Livingston was unfortunate having looked to be the quickest driver on the night in the less than ideal conditions!! Livingston set the fastest lap in a couple of the races, and had he not had a couple of early mishaps – would likely have been walking away with at least one win under his belt. The slower track conditions meant that the star graded drivers found it tougher to make headway through the traffic, enabling some of the lower graded drivers the opportunity to battle bravely throughout the evening – none moreso than Adam Low and Ciaran Adams – with both drivers showing determination and grit to keep those behind at bay. Scottish Champion Aaron Riddell found the going tough from the very back of the grid throughout the evening, though did pick up three top three finishes on the night as he found a setup that worked for him.

The Stock Rods seen another good field of cars, with a couple of drivers joining us for the 1st time in 2021! Craig Watson finally got an opportunity to show off his new car, though was plagued by fuelling issues throughout the night, which hampered his progress in each of the races – it will be something he will be hoping to rectify over the winter months, with a view of hitting the ground running in 2022! Leon Stewart found himself racing with us, and found the conditions difficult it seemed, with a few spins throughout the night, whilst also being collected by the oncoming Jamie Stewart on one occasion! Niall McFerran looks to be becoming a regular attendee at Lochgelly Raceway, having made his 2nd appearance in a row. The Northern Irish driver has been living in Scotland and may well become a regular attendee in the 2022 campaign. Alex McDonald also made an outing at Lochgelly Raceway, and seemed to fair well throughout the night – avoiding any incidents, and finding some good track speed himself. Robbie Hamilton finally managed to secure a win on home soil in the opening race of the night, benefiting from the demotion of Jamie Stewart who was adjudged to have held the pack up too much at one of the restarts. Niall McFerran took the 2nd heat win, before Ian Donaldson took the win in the meeting final – continuing his impressive form in the Stock Rod class of late.

The ProStocks had a few less cars than expected, though, managed to put on a good showing. Lee Kopacz made only his 2nd appearance of the season at Lochgelly Raceway, and looked to be in the mood, picking up a few good results, and sticking the bumper into good effect throughout the evening as well, though did find himself on the receiving end at the end of the night as well! John Mason and Jason McAlpine had a coming together in the meeting final as well, with Mason putting a fair, but big hit in on the McAlpine car, that left McAlpine stranded against the wall. World Cup winner Ian Christie took a race win in the opening race of the night, with Darren Rae going onto take a heat and final double, and move ahead in the track championship standings in the process. The ProStocks are back with us next Saturday in the final outing of the season, in an event that will see the National Points and HRP Points determined!

A healthy field of 2.0 Hot Rods provided some great racing throughout the night, despite the less than ideal conditions. Heat 1 of the night seen Jock Campbell disqualified from the race having been deemed to make excessive contact with Jason Secker and spinning him out in the process, whilst former F2 star Keith Brown had his best outing to date in the class – taking away a double heat win which will see him move upto yellow grade for the start of the 2022 campaign. Gerry Hendry returned to action having sat out a few meetings, and will be satisfied with his efforts on the night – taking away 2 runner up spots, and a win in the meeting final as well. A difficult night was had for Cameron Willacy, who went into the meeting with a seemingly comfortable margin over Jason Secker in the quest to become the track champion – though, difficult conditions, and being caught up a couple of times seem him finish further back than he had hoped – and in the end, just hung on to take the title, though Secker will be gutted having found himself docked for jumping a start in the meeting final as well! 2022 will see a few new drivers come into the formula, and it looks set to be a titanic battle between a number of the star names with Kevin Stewart returning to action as well.

The Van Banger Scottish Championship was the main attraction, and with just under 15 vans on track, it was an entertaining affair – as is the norm with Van Bangers, the track quickly became treacherous and greasy, with vans stricken around the raceway!! Englishman Andy Armstrong would be the driver that would come out on top and took away the Scottish Championship as a result of his efforts, making the journey north worthwhile! Jamie Sangster took away a double race win, whilst Callum Marshall would claim the DD after a big head on seen a couple of the competitors ruled out of the reckoning!!

A mid event firework display wowed the crowd as well, with one of the biggest displays at HRP in history. The large crowd will have left the raceway at night entertained, and looking forward to coming back for more on track action!!

We are back this Saturday night, with our final meeting until our Hogmanay special. The Micro Bangers are in action, whilst the 1300 Stock Cars battle it out for the Michelle Freck Memorial shield. The Junior Productions and ProStocks both also feature in a night that will see funds raised for a couple of charities close to some of the racing communities hearts. The evening will round off with a CARAVAN CARNAGE DEMOLITION DERBY!! Visit our website at hardieracepromotions.co.uk for more information!