Walle and Christie Take The Honours

Walle and Christie Take The Honours 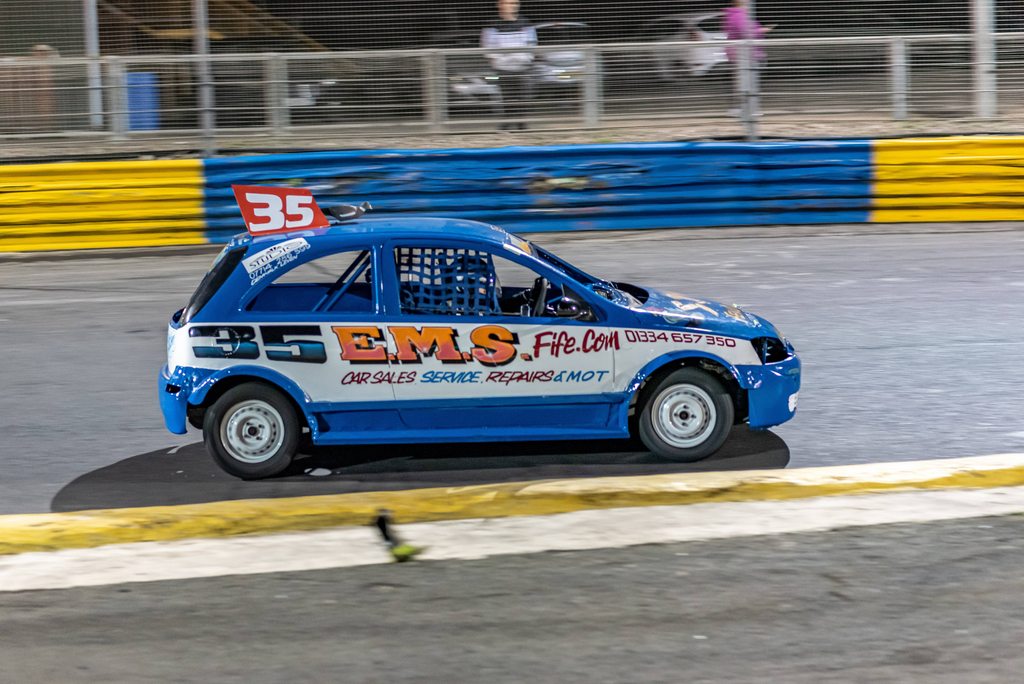 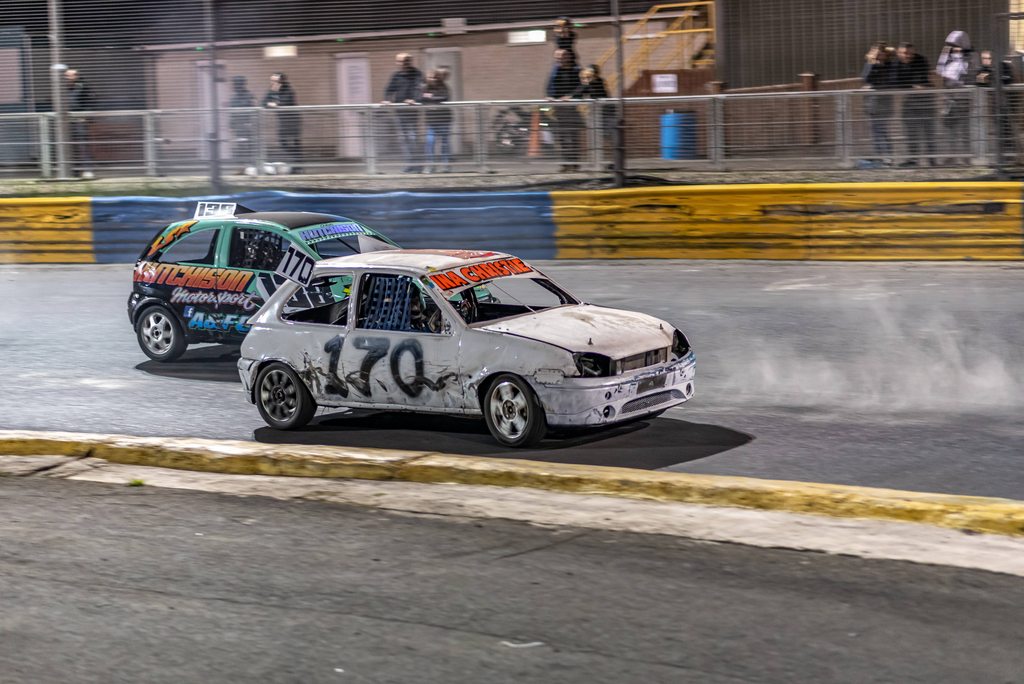 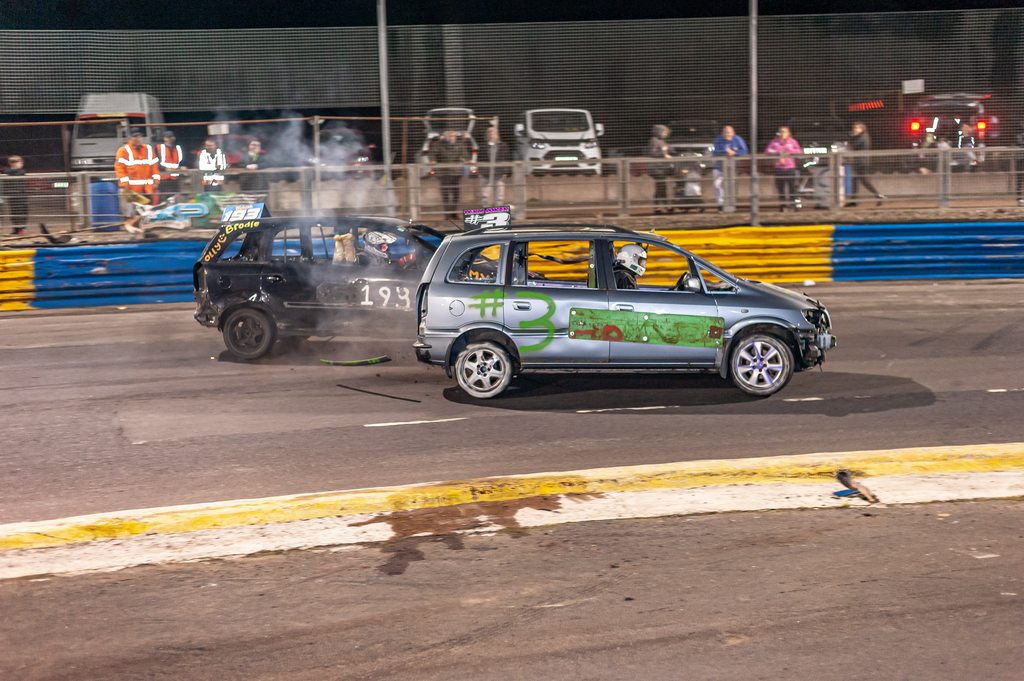 The first of our double header double Scottish Championship weekends took place on Saturday 25th September, as the Junior Productions (Sponsored by Alford Garage and IMO Car Wash Leven) and the CC Rods contested for their respective titles. Two new champions would be crowned on the night with both of the reigning champions missing out.

A pre-meeting drivers briefing would explain the expectations for both the headline formula, with a grid draw taking place for each as well. Two reverse grid heats would determine the qualifying places for the main races themselves – the Scottish Championship feature events.

A four formula line up, featuring the Junior Productions, CC Rods, 1300 Stock Cars and Back 2 Basics Bangers, would see the 1300 Stock Cars kick off proceedings. The opening 1300 Stock Car race of the night seen 23 cars take to the track, with Michael Byers and Kyle Roberts making their debut’s in the class at Lochgelly Raceway. National Points Champion Kyle Hegg looked to have the legs over the competition, making great strides from the back of the grid, though former Scottish Champion Fraser Clark wasn’t far off the pace neither, and matched the 715 car for the best part of the race – as did Danny Whyte. There would be no catching the run-away race leader though, as Callum Sturrock again showed his worth with another great win, with the ever improving Darren Suddaby taking a runner up spot. Heat 2 of the night seen a delay during proceedings following a big hit from Regan Watson on Declan Lindsell only a few laps into the race, with some fence repairs required. A yellow flag caution would bunch the pack up, and upon resumption, gave the benefit to some of the star graded drivers coming through the pack. Fraser Clark would be the one to make the biggest movement, ultimately, taking the race win, again with Darren Suddaby finishing in 2nd, and National Points Champion Kyle Hegg in third. The meeting final unfortunately seen Hegg miss the race, which put Fraser Clark in a position to close the gap at the top of the track championship, though, with Clark sitting in 2nd place with only a few laps to go, retired to the infield! Callum Sturrock would therefore hold onto take his 2nd race win of the night, with Danny Whyte and William Stawiarski completing the top three!! The 1300 Stock Cars are back in action on the 9th and 10th October, as they contest the inaugural Lochgelly Masters for the formula over the 2 days of racing!

The CC Rods began their quest for the Saltire with Kenny Pitcaithly and Raymond Brown starting on the front row of the opening heat, and after an aborted start on the first attempt, the lights would go green on the second take, though the 750 car of Raymond Brown would receive a black cross for an alleged jump start. The front duo would be clear of the pack, with Brown storming ahead, and Pitcaithly having a gap either side of him on track. Behind Pitcaithly, Craig Mason put up a solid drive to bring his car up into third position. Pitcaithly would be given the race win, with Craig Mason finishing in 2nd, before Brown completed the top three, before falling foul of post race scrutineering, elevating Emma Kirk up into 3rd place. Heat 2 of the night, seen the grid flipped around, with Kevin Hutchison starting on the front row, and took a flag to flag victory as a result. A coming together between Graham Campbell and Kyle Hutchison would see the Hutchison car spun around on the start finish straight, with Dylan O’Donnell also swerving to avoid the cars, and bouncing over the infield kerbs!! Both Hutchison and O’Donnell found themselves out of race! Brian Allen and Ian Christie would go onto round off the top three behind Kevin Hutchison. As the computer calculated the grid for the meeting final, it was Ian Christie and Kenny Pitcaithly that would find themselves on the front row of the grid. Both cars drove around side by side, as the green flag dropped to commence the Scottish Championship race. A small coming together between the 170 and 91 cars, would see Pitcaithly bounce off the tyre of the Christie car, and hit the wall just under the starters rostrum, that would put a swift end to his Scottish Championship race. Ian Christie would then find himself under pressure from Kevin Hutchison for the remainder of the race, as Hutchison tried his best to find a way past the ‘fat’ Fiesta of Christie up in front. Emma Kirk drove a solid race, as she defended third place excellently for the duration of the race. Christie would become the 2021 CC Rod Scottish Champion, hanging on by less than a cars length from Hutchison, with Kirk rounding out the top three, in what was an excellent meeting for the non-contact class.

The Junior Productions had arguably, one of the best meetings for the formula to date – with little in the way of issues, and good competitive close racing from the youngsters. Heat 1 of the night seen the former Scottish Champion Koddi Wright march from a mid-pack starting slot, to take the race win, with Jack MacLeod following him home in 2nd place – though was later docked for a jump start which dropped him down to 4th position. Jase Walle and Dylan Smart were the benefactors of this, as they moved upto 2nd and 3rd place respectively. Heat 2 of the night seen the grid reversed, with those starting at the back of heat 1, now starting up front. Declan Dixon was the driver that made the most of the further forward starting position, as he battled his way throughout the race, to take away a 4th place finish – with the same first three as heat 1, being the top three in heat 2 – this time, Dylan Smart leading Jase Wall and Koddi Wright home. With several points positions being tied, it went down to lap times to determine the grid for the main race between those tied on points! Jase Walle would be the driver to get the pole position slot, with Koddi Wright outside, and Dylan Smart inside row 2! As the green flag dropped, Koddi Wright immediately put the Jase Walle car under pressure, with Walle running slightly wide into turn 1, but managed to keep a tight enough line to prevent Wright getting on the inside, who himself had Dylan Smart hot on his heels. Walle would survive the opening lap challenge as he cemented his place in the lead of the race, with Wright and Smart not far behind. Lennon Grant battled consistently, as he did throughout the night, as he took away a 5th place result in the Scottish Championship race – Up front, it was the same four drivers from the first heat of the night that would take the top 4 in the Scottish Championship – Jase Walle taking a relatively comfortable race win, ahead of Wright, Smart and Jack MacLeod. The Junior Productions are back with us in just a couple of weeks time, as they contest their Scottish Open title on the 9th and 10th October – part of our 2 day banger world up weekend!

The Back 2 Basics Bangers were in action for the 2nd last time in 2021, and again, provided some good racing throughout the night. Zander Martin would take the opening race win, before the car numbers started to fall away with some bigger hits going in as the night wore on!!! James Dillon would take the 2nd heat of the night, with Ryan Martin winning the final, before the DD went the way of the 888 car!

We are back in action this Saturday night at Lochgelly Raceway, for the 2nd part of our double header, double Scottish Championship week – This time the Ninja Karts (Sponsored by KN Transport), and 2.0 Hot Rods will battle it out, whilst the Stock Rods, ProStocks and Ministox all also feature! The first race takes place at 5pm – be sure to join us then!