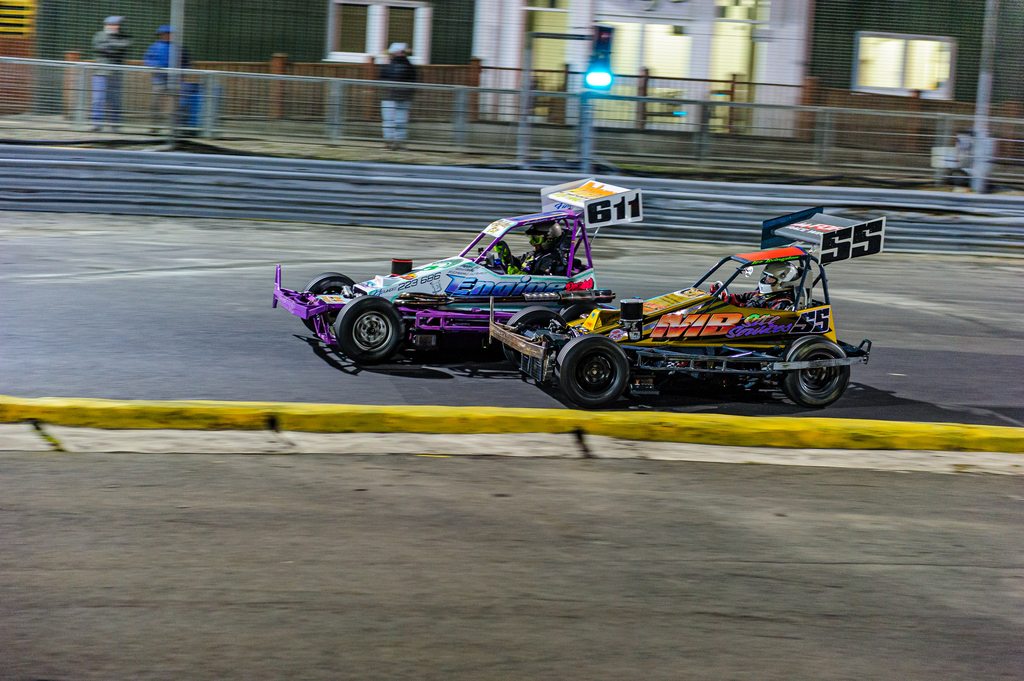 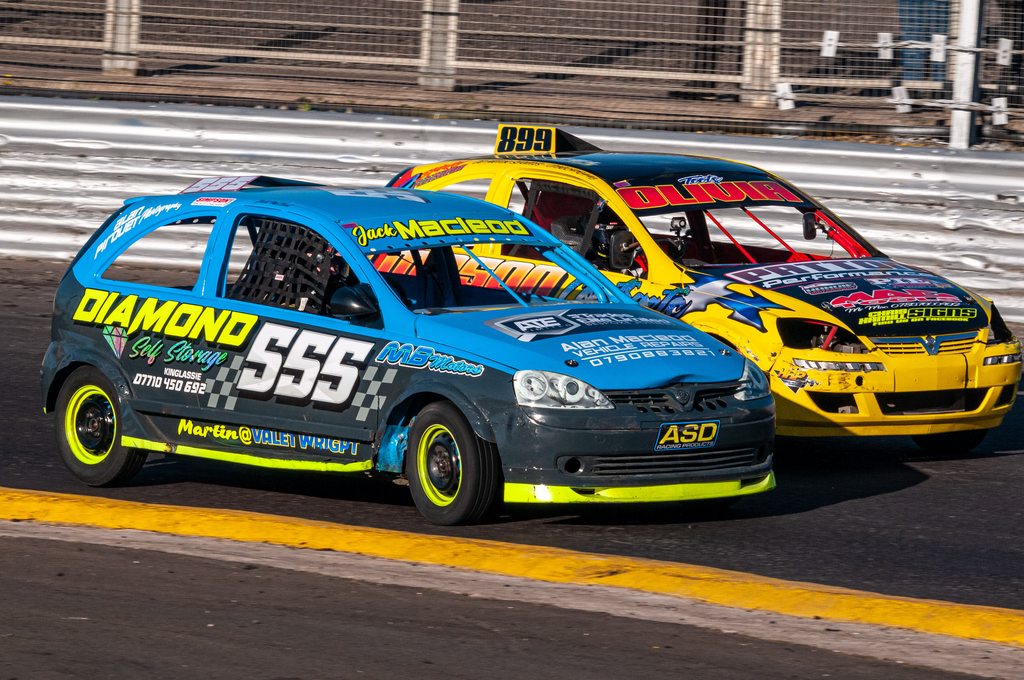 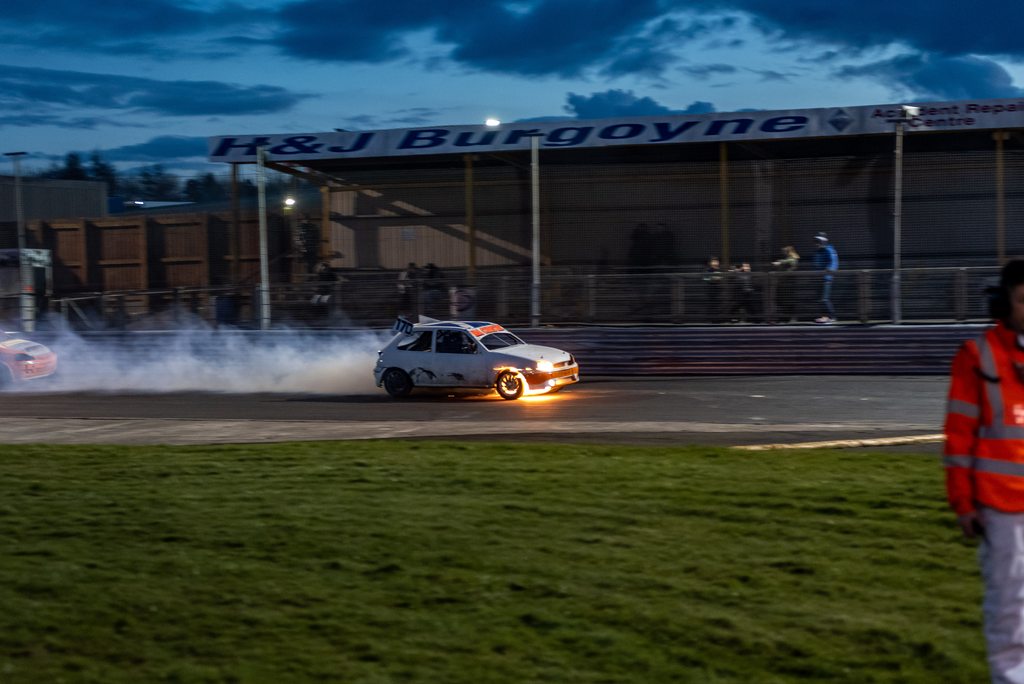 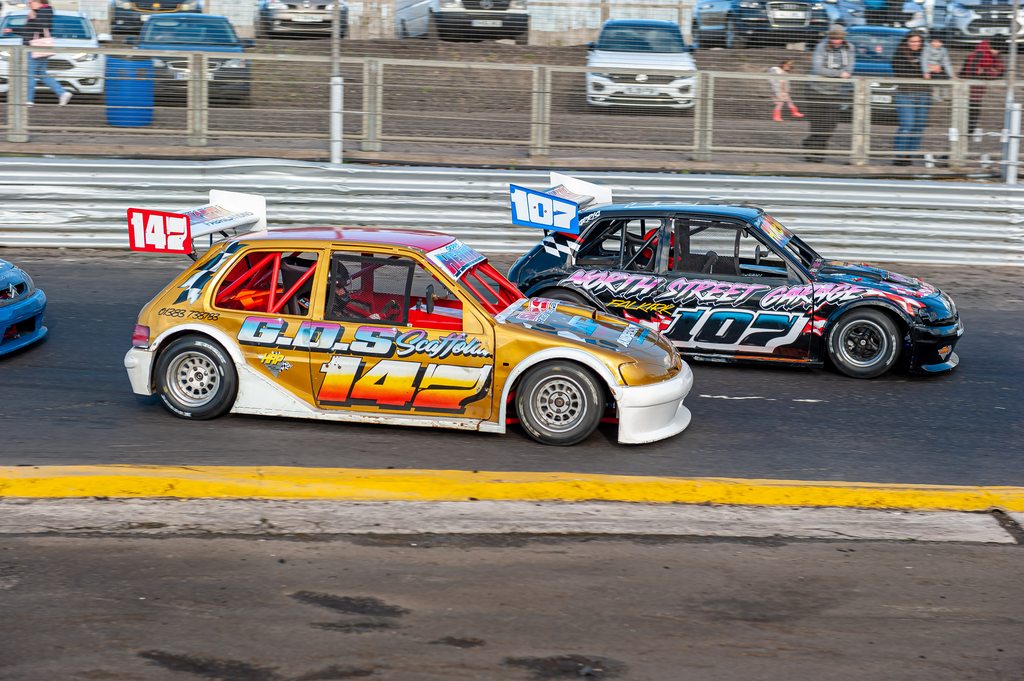 Some great racing was witnessed on Saturday night at Lochgelly Raceway as the five formula in attendance provided entertainment throughout the evening.
There was a hat-trick for Dean Johnston in the Superstox, whilst Jack Jones, Chris Hutchison, Koddi Wright and Kevin Stewart all came away with 2 wins each in their respective formula.

The Superstox seen 16 cars take to the track, including debut’s for John Rankin and Colin Din, though Rankin was troubled by issues throughout the evening. Jack Turbitt looked to have good pace in the opening heat of the night, as he found himself moving up the places at a good pace, though, Dean Johnston would be the driver that would find the front of the pack quickly, and pulled a bit of a gap on the chasing field behind, although, Scottish Champion Aaron Riddell did close the gap in the closing stages of the race, though not enough to mount any sort of challenge on the 446 car. Heat 2 of the evening was a similar affair, though Adam Low looked in good form, as he found himself lead the pack until around the mid way stage of the race, only to be overcome by Johnston and Riddell again. Lee Livingston put a solid charge in through the closing stages of the race, as the bumpers went in for the lower places – Livingston would be the driver to maximise his points haul, claiming 2 places in the closing lap of the race. Mark Brady put in a massive hit in the latter stages of the race, that seen cars spin around and clatter the wall as a result, with a few not making it out for the meeting final, and a couple others ‘patched up’. The final itself seen the field spread out for much of the race, with Campbell Scott leading in the early stages before the star graded drivers caught up and moved into the lead of the race. Dean Johnston would complete his hat track, with Riddell finishing 2nd and Lee Livingston rounding out the top 3.

The Ninja Karts yet again seen an excellent turn out, with just under 30 karts taking to the track on the night. The youngsters never fail to disappoint, with some breathtaking racing witnessed by a mixed bag of drivers. English visitor Arthur Ware took the opening race of the night as he took a win in the whites and yellow race, whilst Tommy Melrose and Caelan Grant completed the top 3. Fellow English visitor, Jayden Roff had a good night in the formula, though had to pull off a couple of times due to technical issues with his race receiver. Kenzie Bell looked back to his best as he looks to have found his feet in his new kart, and raced to an excellent win in the first main heat of the night, with Jack Connor and Murray Hall completing the top 3. Bell would be up there challenging in each of his races on the night, and was only beaten to the flag in heat 2 by southern based Jack Jones. It would be an English sandwich on the podium for heat 2 though, with Bell surrounded by Jones and Jenson Fish. The final race of the night for the superb Ninja Karts, was another fast paced event, as the star graded drivers battled their way through the field. Jack Connor continued his impressive form, with another top three finish from the back of the grid, bringing his kart home in 2nd place, behind Jack Jones, with Dougie Kidd completing the top 3.

The Junior Productions continue to go from strength to strength, with more and more drivers getting up to speed, providing some superb non contact racing, which some of the senior formula would be proud of. Jack Baird was in the form of his life, as he battled for race wins in all three races, and ultimately came away with a 1st, 2nd and 3rd on the night – Baird took the opening race of the night, despite what appeared to be an engine issue throughout the night, whilst Koddi Wright and Jack MacLeod both battled superbly from the red grade to complete the top 3. James Slater has found some great pace in his new car for 2022, and continues to perform well, and was unfortunate not to take a race win on Saturday, as he finished 2nd in heat 2 behind Koddi Wright, and crossed the line in first in the meeting final, but was adjudged to have hit a back marker whilst battling for the lead which hampered the then race leader. This seen him demoted a couple of places, but we have no doubt that a race win is just around the corner for the youngster. His demotion would see Koddi Wright and Jack Baird move up into the first and second positions with Slater dropping down into third position.

The CC Rods found themselves with a good field of cars on track, with Scott Ewans making his return to racing, having not been on track for several years. Recent Junior Production graduate David Dignan would claim his first win in the formula in the first heat of the night, which will put him in good stead for the grading period at the end of the month. Chris Hutchison has been a consistent performer so far in 2022, and looks to be producing some of his best racing of his career, as he took a double heat and final victory, with only Dignan crossing the line ahead of him in the first heat. Kyle Hutchison and Callum Elliot have both been picking up the places lately, with Hutchison in particular showing good form from the rear end of the grid. Ian Christie provided some drama in the meeting final as his car became smokey, before a big flash of flame would erupt from the front of the car which quickly seen the grid come to a halt as the flame was extinguished.

Kevin Stewart was the driver that would come out on top in the 2.0 Hot Rods on Saturday night, though there would be disappointment for James Morris in the meeting final as he was deemed to have gained an advantage at the start of the race by using the infield area of the track. Morris beforehand, put in a sterling drive in the meeting final as he battled his way from near the back of the grid and made a superb move around the outside of 4-5 cars as he moved up the places and finally into the lead of the race, with Stewart holding a tight inside line with the pack backed up behind him for much of the race. It would only be Morris that would make a move stick on the outside, before opening up a gap behind. Unfortunately, Morris would not get the win due to his previous black cross infringement. Marc Honeyman took his first win of the season in the second heat of the night. Josh Duff would make his debut in the former Honeyman car, though struggled in the opening heat, and wouldn’t be seen on track again on the night.

We are back in action this Saturday night as the 1300 Stock Cars, Ministox, 2.0 Hot Rods, CC Rods and Ninja Karts all feature in a 5.30pm start.