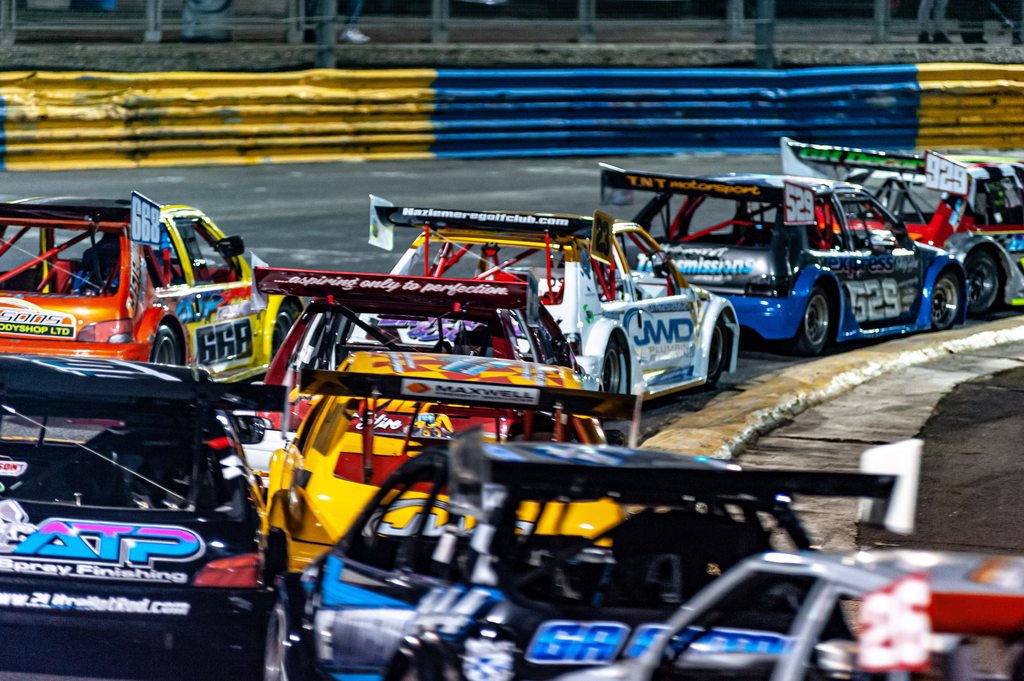 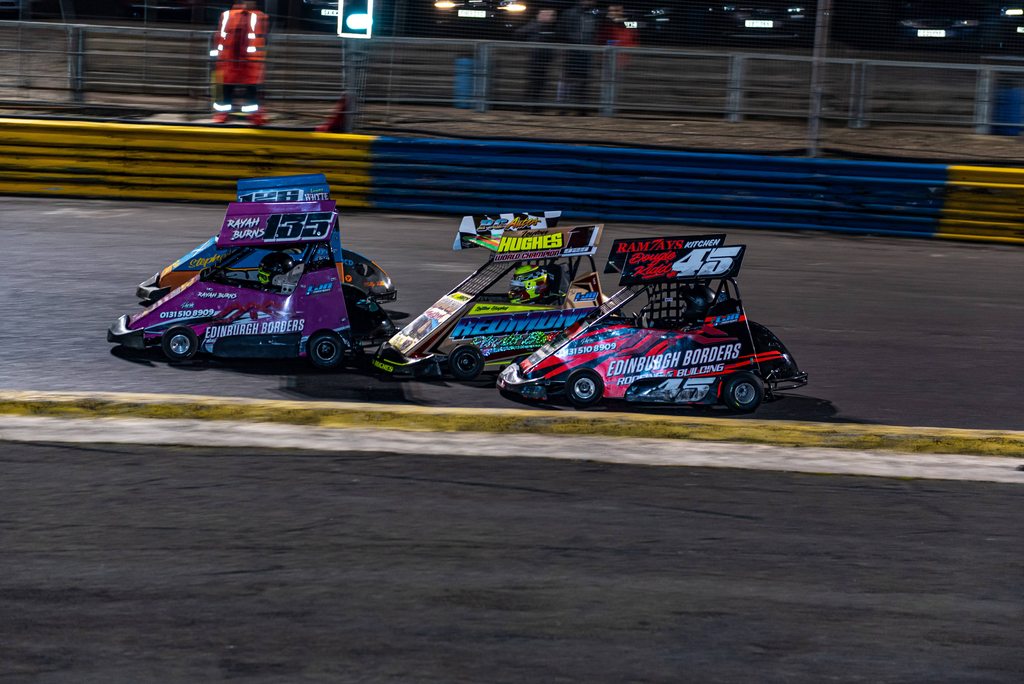 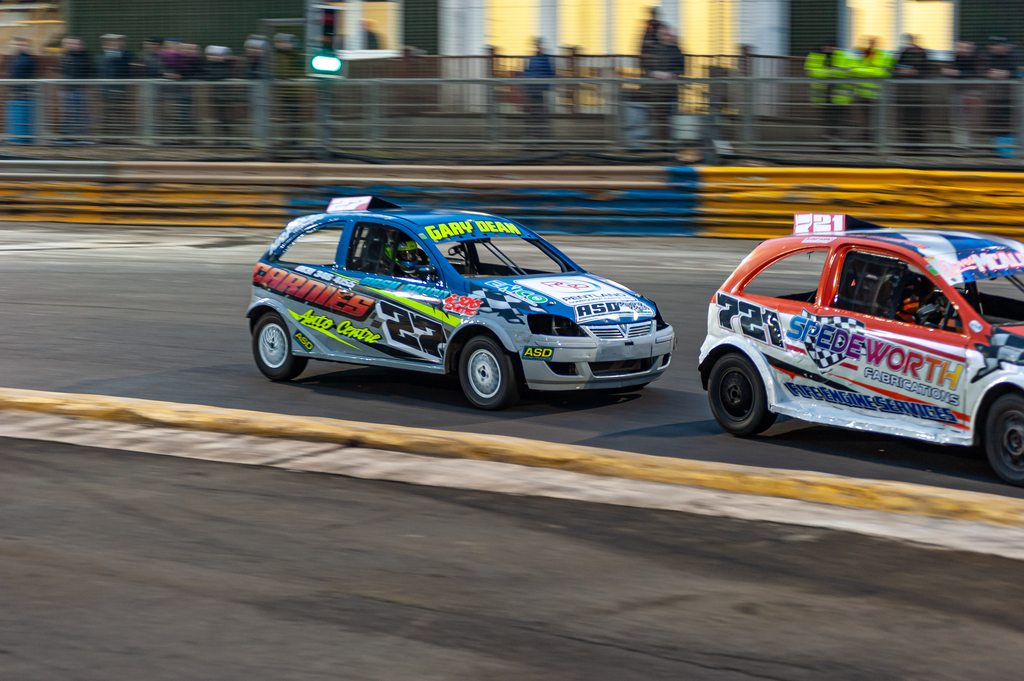 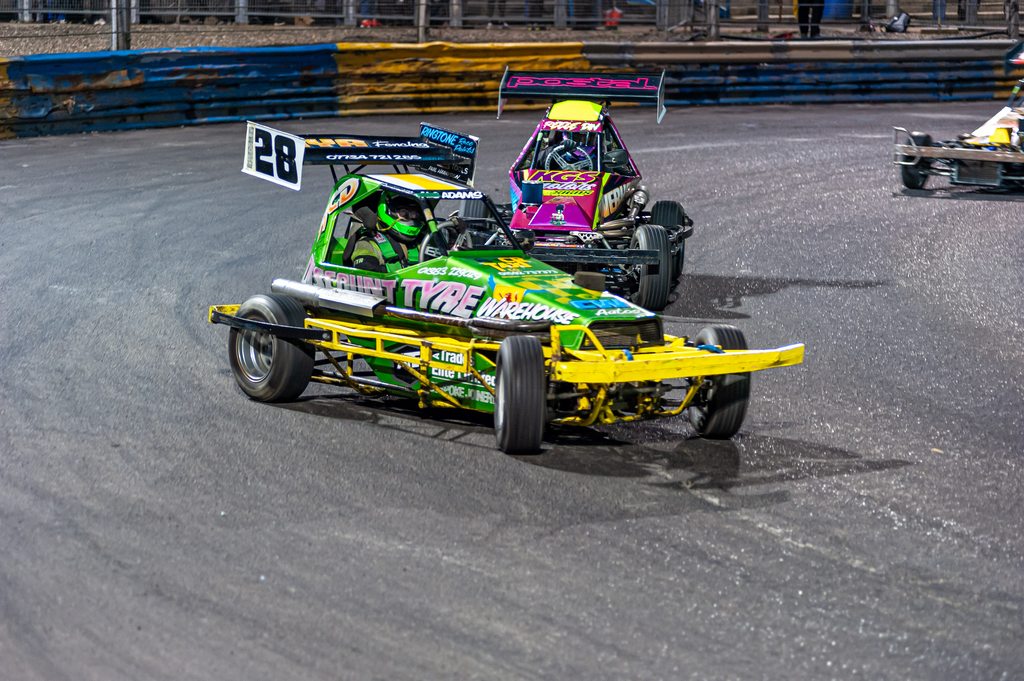 Saturday night at Lochgelly Raceway witnessed some excellent stock car action on what was a dry and hugely entertaining evening of racing!

The 2.0 Hot Rods arguably stole the show with some breathtaking racing from the formula. The star studded line up certainly put on a show as drivers all bid to get as much track time as possible ahead of the World Championship in July. A grid featuring the World Champion, British Champion, DMC Points Champion, HRP Points Champion and Scottish Champion was always going to be well contested, in addition to a return to racing for William Hardie, and a return from suspension for Kevin Stewart. Keith Brown debutised the ex Andrew Denholm car and showed off his immaculate traditional red and yellow colour scheme. Keith led the way in each of the 2 heats on the night, but found himself at a the front of a train of cars battling with all his fight to hang onto the inside line in an effort to keep the train of cars behind – though, as the door opened for 1 car, he soon found himself dropping back as he found himself stuck on the outside line on both occasions. Gerry Hendry led home William Hardie in the opening heat, before Kevin Stewart took heat 2, finishing just ahead of DMC Points Champion, Drew McKeown. The 2 heats had their scores combined which was used to determine the grid for the meeting final. Drew McKeown would find himself on pole position with Kevin Stewart on his outside, and Hardie and Morris just behind. As the green flag dropped, it was McKeown who got away first, though had Hardie and Morris on his bumper in the opening stages, before he opened up a lead to the pack behind. Morris would finish ahead of Hardie, with Secker and Dews rounding out the top 5.

The National Hot Rods competed in their first meeting of 2022 with a sharp increase in car numbers based on the numbers in 2020 and 2021. A number of new drivers made their debut including Darren Scott and Ross Alexander, whilst Steven Armit made a welcome return to racing in his brand new Fiesta Hot Rod. Armit looked to have good pace straight ‘out the box’, though found himself with a blown gearbox before the last race of the night. 2020-21 Scottish series points champion, Ross McWilliam continued to be the one to beat as he raced excellently throughout the night as he claimed yet another heat and final double, with a 3rd place awarded in the 2nd heat of the night. Rapid Roy Anderson had a strong performance as he finished in the top 2 all evening, as he cements his place in 2nd in the series standings. Marc Spence showed off a stunning car, in a striking yellow livery, and the car looked to be on it as well – with Spence picking up some excellent results, despite failing to finish the opening race. A runner up spot in heat 2, and a 4th place finish in the final is a strong start to 2022 for the 756 pilot. James Mooney continues to go from strength to strength in the Nationals, as he performed strongly in what was a challenging field of cars on Saturday night. A third place finish in the meeting final was an excellent reward James. Matt McPherson enjoyed another outing in the (ex) McWilliam car, with his best result coming in the 2nd heat of the night, as he claimed a 4th place finish.

The Superstox provided the contact racing on the night, and the formula welcomed a couple of new drivers onto the scene. Former CC Rod drivers Ryan Cameron, and former 1300 Stock Car driver, Patrick Calderwood both made their debut’s, with Calderwood fairing best. David Frame made a return to racing following a freak accident away from the racing that caused significant damage to his arm. Kenny McKenzie rejoined the ranks having sat out a chunk of 2021, though is looking to do as much meetings as possible in the 2022 campaign. Ciaran Adams was in action though had to borrow his father’s car, with Ciarans car not quite ready for the 2022 season as yet! Mark Brady debuted his stunning new car, whilst Reece Din brought out the ex 309 car. Adam Low looked to be in good form throughout the night, picking up a 2nd place in the meeting final, and putting on a show as well, as he continually put the bumper into those around him on track, with the ‘move or be moved’ mentality that makes him a driver to watch in the formula! It would be David Frame that drew first blood in 2022 though, as he took a heat win in the first race of the night for the formula after a coming together seen early pace setters Adam Low and Lee Livingston spin out of contention in the closing stages of the race. Scottish Champion Aaron Riddell found himself finishing in 2nd place, with Ciaran Adams rounding out the top 3 in heat 1. Heat 2 would see Lee Livingston look in dominant fashion, as he raced away from the field to open up a good gap, though David Frame would close him down, it wouldn’t be enough for a last lap lunge, as Frame had to settle for 2nd position, with Riddell rounding out the top 3. The meeting final seen the bumpers be put to use throughout the field, with Low, Riddell, Frame and Brady all involved in an excellent tussle over several laps, that ultimately seen Riddell and Frame retire from the race following a big hit from the 53 pilot onto the 119 car. Livingston would take his 2nd win of the night in the meeting final, with Low and Brady rounding out the top 3.

The Stock Rods seen a few cars missing from action, with several drivers not yet having their cars ready for action. A host of new drivers were welcomed into the formula though, with Paul Hughes, Alex McDonald, Jamie Doyle and Allan Hamilton making their HRP debuts. Niall McFerran would also join the HRP ranks for 2022, having moved to Scotland from Northern Ireland. McFerran took an excellent race win in the opening heat of the night, with Scottish Champion Darren McAlpine finishing 2nd, and Gary Dean in 3rd. Heat 2 would see Jamie Stewart take the flag, holding off McFerran to victory, with Dean again taking away the 3rd place trophy following the docking of 721 Darren McAlpine. The meeting final would see the grid bunched up in points order from the 2 heats. McFerran and Dean would occupy the front row as a result. Gary Dean, who was in great form towards the end of 2021, took the final victory, as he looks to continue in that form throughout 2022. McAlpine brought his car home in 2nd place, whilst McFerran completed the top 3.

The youngsters in the UKMC sponsored Ninja Karts had a fantastic entry of 30 cars, with drivers from England, Scotland and Northern Ireland all represented. There would be no joy for the English contingent though, with race wins going to Scotland and Northern Ireland on the night – Northern Ireland’s Caolan Fegan taking a double, as well as Scotland’s Eevie Ford. Eevie is showing signs of becoming a future champion, with some breathtaking racing, and it must only be a matter of time before she takes a big win. The whites and yellows race started off the evening for the youngsters and with around 15 karts on track, including 4 novice drivers, it was an opportunity for some of them to gain valuable experience on track, without having the big names chasing them down. Fegan took the win, whilst Layton Cairns and Louie Hendry completed the podium positions. There were some great showings in the main heats from some of the lower graded drivers, notably Katie Lee Smart and Lucas Whyte – with both drivers being extremely unfortunate to leave without a win under their belts. World Champion Layton Hughes was in attendance with us, and showed great pace at Lochgelly Raceway, though was unable to reign in the flying Eevie Ford in the opening heat of the night, with Dougie Kidd finishing in 3rd place. Heat 2 of the night would again see Ford victorious, though it was English Open champion Jack Connor that would be the closest challenger, as he brought his kart home in 2nd place, with Lucas Whyte finishing in 3rd position, in a race that seen a brilliant finish. From 3rd to 6th place, there were only a kart length or so between all the drivers, with Whyte and Hughes crossing the line almost side by side, and the same with Kidd and Smart – with some back markers in the mix for good measure!! The final race of the night for the ever entertaining youngsters would see Fegan and Ford take the top 2 places, with Connor and Kidd finishing 3rd and 4th respectively. A great night for the youngsters, with several debutants on the night, including Jayden-Lee Jeffrey, Blair Innes and Nate Wotherspoon, with Wotherspoon fairing the best out of the trio.

We are back in action this Saturday night for what could be a mouthwatering event – The 2litre bangers, 1300 Stock Cars, Ministox, ProStocks and Stock Rods all feature in another five formula spectacular. Racing starts at 530pm! 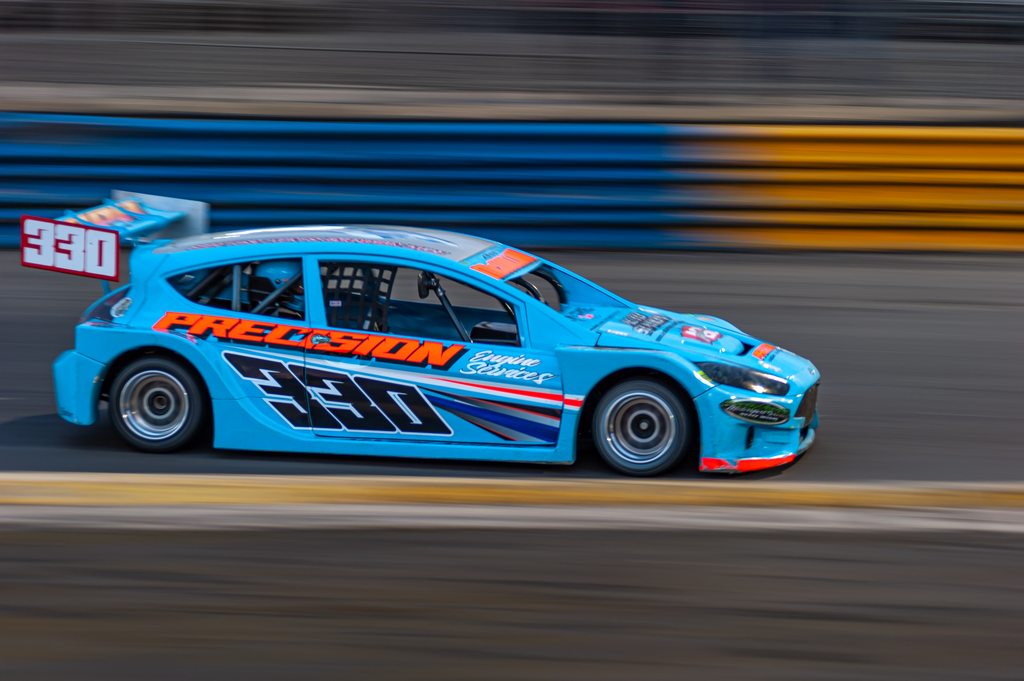