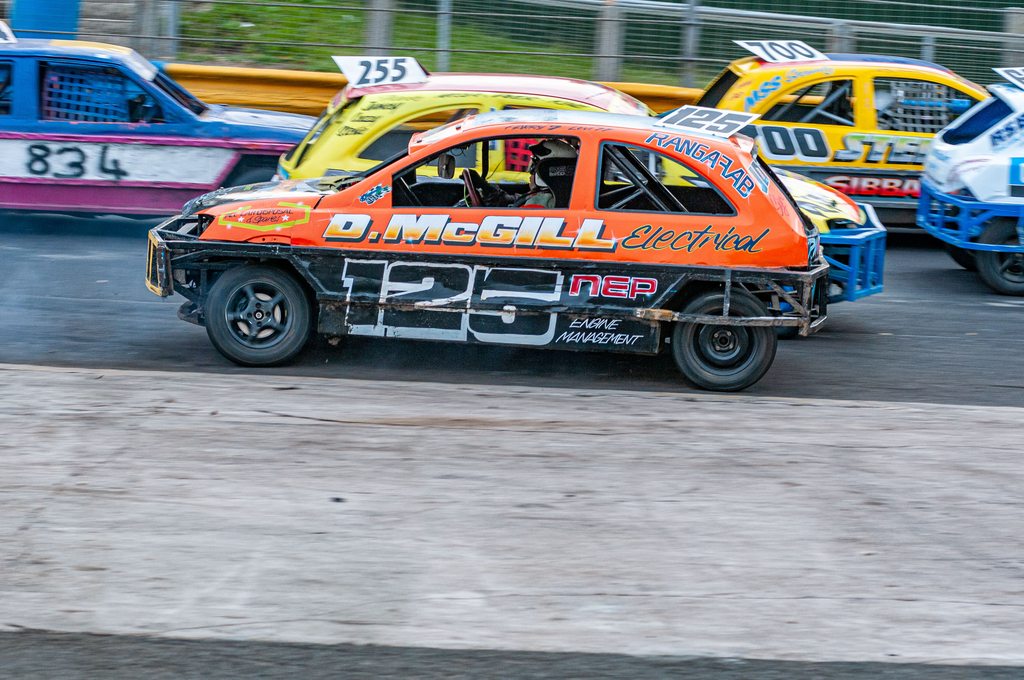 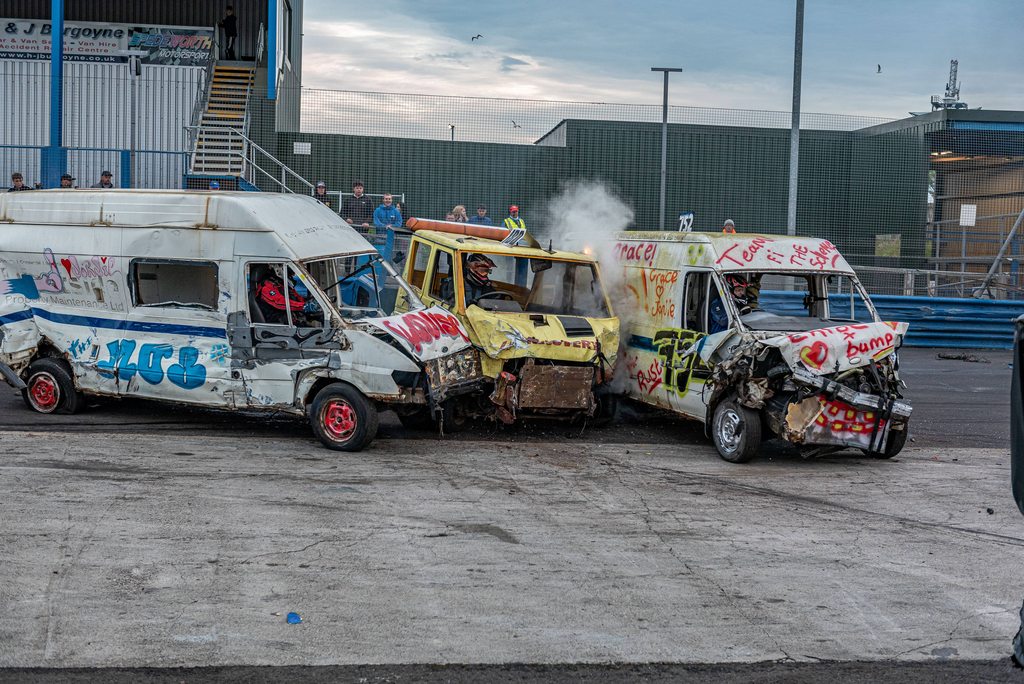 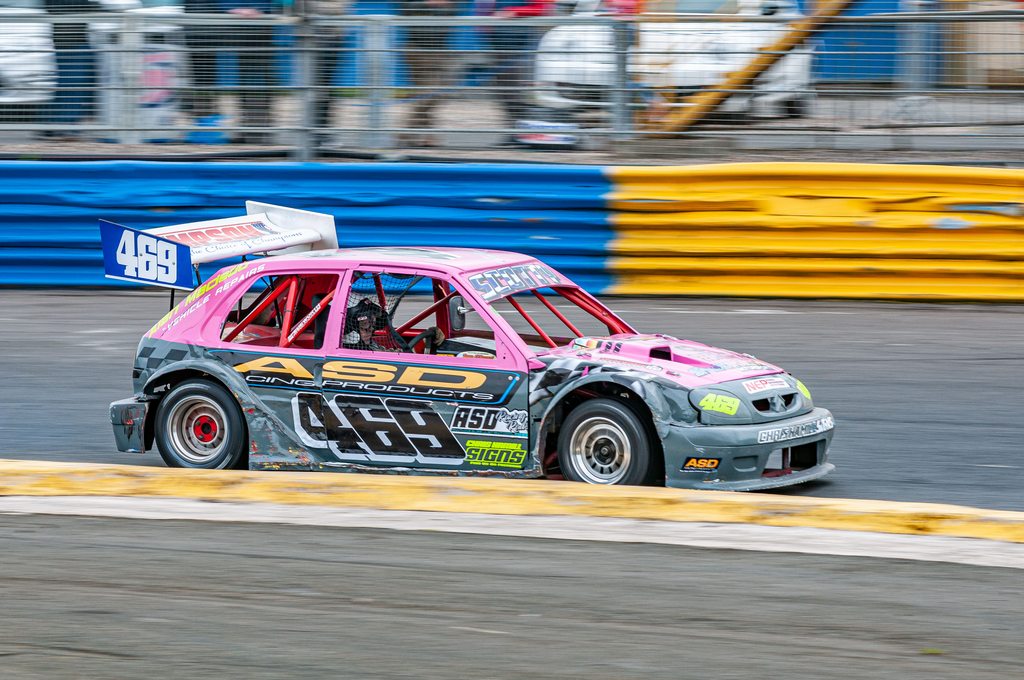 The Big Van Bangers rocked into town on Saturday 19th June and provided an evening of super entertainment with a strongly contested Demolition Derby to round off the evening. The Shaun Walsh Memorial kicked off proceedings for the Van Bangers. Sean McConnachie was out in an old style pickup van, and certainly had the crowd cheering throughout the race as the egged him on for his efforts to entertain, as he slowly went around the track trying to hit whatever he was able too! Sean did much the same in heat 1 for the Vans and set out to put on a show – despite a broken steering link! Sean couldn’t really do much, other than go back and forward as he attempted to collect and crash into some of the oncoming vans! Rhory Smith looked to be on route to claim the Shaun Walsh Memorial race, leading by quite some distance at one point, however, was caught out in the closing lap after sliding his van around the track and ultimately lost out to Mayfields Jim Dillon as The Mob driver claimed the 2021 Shaun Walsh Memorial. The Thomson clan claimed the other races on the night in the Vans – Simon claiming heat 1, and Chris claiming heat 2! The Demolition Derby was the race that everyone stuck around to see, and with 9 vans contesting in the DD, it was a lively affair with plenty of vans to watch in their efforts to be the last van moving! Lee Clarke had a well presented van as he looked to raise some money for CHAS on the night as well – with around £2,000 being raised for the cause! A great effort by Lee, and all those that donated! Lee Clarke was another driver who was out to put on a show, and crash as much as he could until his van gave up on him in the DD – though, he did try and get it going again despite a small fire at one point!! The Big Vans are back in action at Lochgelly Raceway on the 6th November as part of our Firework special event as well!

The Junior Productions provided yet another lively encounter, with some great racing from the youngsters, with a few also driving on the edge of the rules! Nevertheless, the youngsters certainly put on a show with around 20 cars taking to the track on Saturday night. Charlie Hardie, having an outing in the Koddi Wright car, seemed to take to it like a duck to water as he crossed the line in 1st place in the opening race of the night, though was later demoted a couple of places for deemed contact which seen Jensen Bell take another race win. Lennon Grant brought his car home in 2nd place, with Charlie demoted to 3rd. It was a great night for the Rogerson racing team though, with Kyle claiming a heat win in the 2nd heat of the night, and sister Samantha then going onto win the meeting final, holding off Charlie Hardie for the last few laps of the race. The formula certainly seems to be providing is fair share of talking points – both for providing some excellent non contact racing, but also for the wrong reasons as well – something that we hope will improve in the meetings ahead! It is great to see the formula continue to grow though, with Connie Anderson being the latest driver to make her debut in the formula, joining sister Leonna on track!

The 1300 Stock Cars were in action again with a few cars missing from the last meeting, however still seen over 20 cars take to the track, and provide some excellent racing throughout the night, with some heavy shunts in the process!! Mike Courts was in the thick of the action, having been on the wrong end of a coming together between Barry Jarman and one of the Naismith cars, which seen Courts spin around on the entry to turn one in the opening race of the night, and go backwards into the wall resulting in a yellow flag caution whilst the medics seen to the driver. Kyle Hegg looks to have his car motoring well at the moment, and looked to have claimed heat 1 of the night before being judged to have jumped a start which seen him docked down to third position, with Euan Mathieson taking the heat win as a result. Callum Barclay has been the car to beat in his first couple of meetings of 2021, taking yet another race win on Saturday night as he stormed to an emphatic heat 2 victory, finishing ahead of the likes of Rory Naismith and Fraser Clark. The meeting final seen one of the best races of the season to date – with a six way battle for the lower places taking place for the majority of the race! A cluster of HRD built cars battled it out, with Euan Mathieson also in on the action. Kyle Hegg, Sean Naismith, Fraser Clark, Rory Naismith and Euan Mathieson all exchanged blows, lap after lap swapping positions, and providing some excellent racing as a result! Euan Mathieson was eventually spun around which seen him drop back the order, whilst Sean Naismith broke clear of the pack and put on a chase to those in front. Jamie Stewart meanwhile, continued his excellent run of form, and took an emphatic final win – winning fairly comfortably from Callum Barclay and Brant West.

The CC Rods were in action for the second week in succession and seen three different winners on the night – Brian Allen, Craig Mason and Ian Christie were the drivers that were present in victory lane throughout the night, though things may have been different had there been a few less dockings on the night! Graham Campbell and Andrew Wightman thought they had raced off into a 1st and 2nd place finished but both drivers were adjusted to have jumped the start and ultimately docked a couple of places as a result, promoting Allen and Christie up into the 1st and 2nd places in the opening heat of the night! One heat was all that John Cuming managed on the night after being caught wrong side by a spinning Vernon Sutherland, which seen the Cuming car career off and into the wall causing a fair amount of damage to the 183 car! Craig Mason finally found some pace in the CC Rod, and claimed a heat win in heat 2 of the night – finishing ahead of the inform Ian Donaldson and Brandon Gourlay. The meeting final seen Ian Christie start on pole position with Brandon Gourlay on the inside of row 2. Gourlay got an electric start and found himself leading the race by the end of the first lap and had soon opened up a healthy lead on the pack behind. All was not over though, as Gourlay caught up with the back markers, he ran into the back of Natalie Mason car before a coming together seen Mason and Gourlay head towards the infield – Gourlay kept the foot down, however, overrun it as he re-entered the raceway and collided with the oncoming Kevin Hutchison as a result – taking both cars out of the race!! Ian Christie took over the running at the front of the grid and held onto take a final win, with Donaldson finishing 2nd and Kyle Hutchison in 3rd position!

The 2.0 Hot Rods were the final formula in action on an action packed Saturday night of stock car racing. Greg Honeyman took a double heat win that would seem him promoted to blue grade for the next meeting, before Scott Devine claimed the meeting final, finishing ahead of Greg Honeyman and Kevin Stewart! It goes right to the wire in the 2.0 Hot Rods as the battle for the National Points intensifies as we go into the final round this Friday night at Lochgelly! FIVE drivers are still in with a chance of claiming the silver roof from Jim Pitcaithly with Cameron Willacy, John Campbell, Gerry Hendry, Kevin Stewart and Scott Devine all in with a shout of winning!!! Be sure to join us on Friday night as the action unfolds and we will try and keep you posted throughout the night with a live update of the points!!

The Superstox and Back 2 Basics Bangers both also feature on Friday night with the first race kicking off at 7pm!! Join us then!