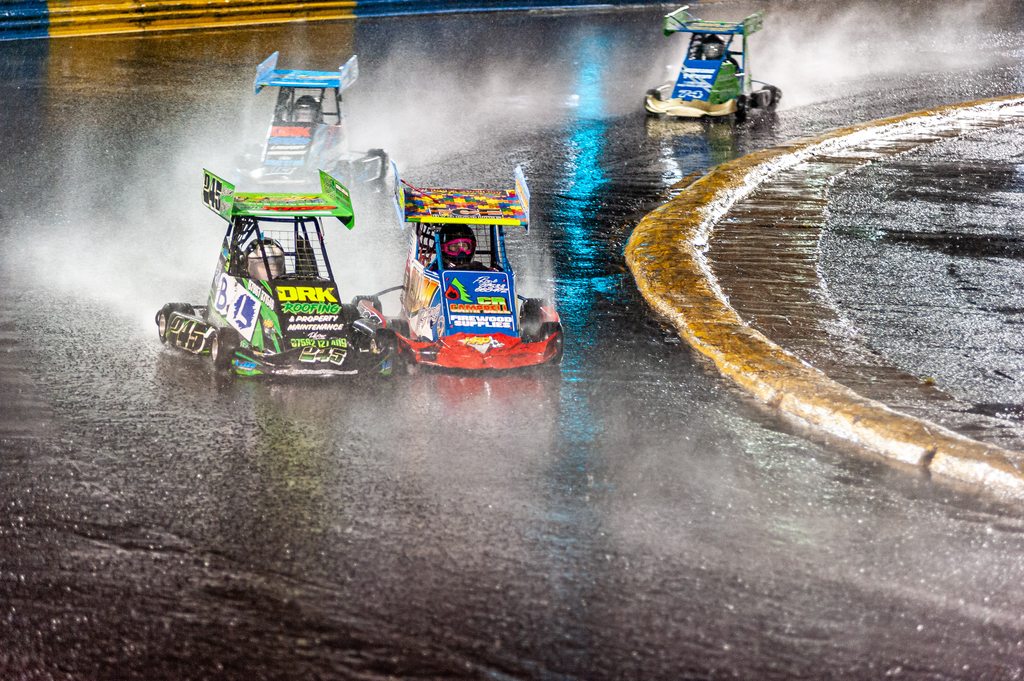 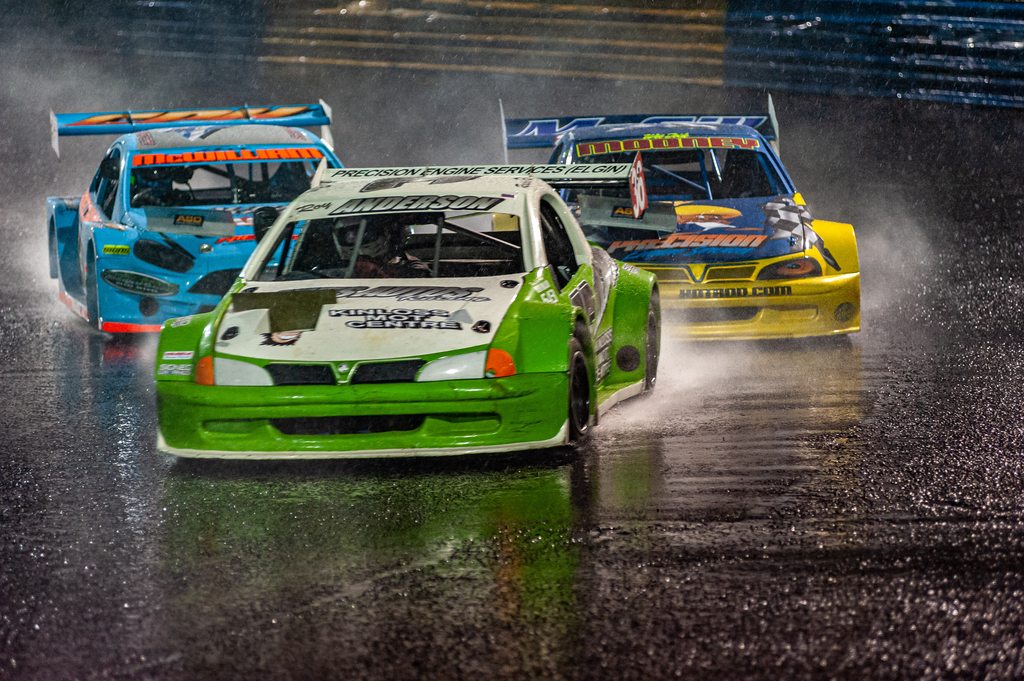 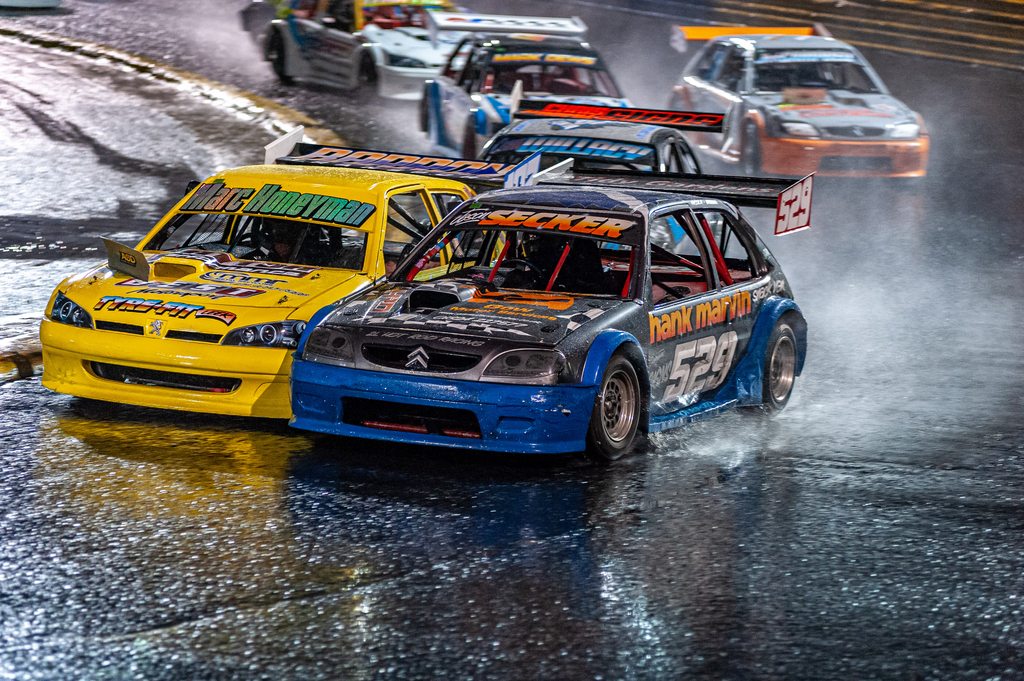 It was another wet night at Lochgelly Raceway on Saturday, but that didn’t dampen the spirts of those in attendance. There were some excellent racing throughout the night, on what was an all non-contact night of racing, though, the Ninja Karts arguably stole the show as they battled for the JusBounce shield.

The youngsters in the Ninja Karts had 4 races on the night, starting off with a whites and yellows race for those a little less experienced, and it was great to welcome Lexie Scott and Charlie Plenderleith into the formula for the first time in this race. Both drivers drove well and kept themselves out of bother, whilst Lucas O’Donnell, making his second appearance, looked to have some good speed and was unfortunate with a couple of yellow flags hindering his progress in the whites and yellows race. Saul Galloway took the win from Tommy Melrose, with Jaxon Joyce picking up a third place finish. The first heat of the night for the Ninjas seen the rain begin to fall just before the cars entered the raceway, and the teams quickly changed to a wet setup for the race. With less than a lap completed, an incident on track seen the yellow flags brought out, and a complete restart called for. Take 2, would see things get away this time, and there was some excellent driving on show from the youngsters in what was deteriorating conditions on track. Jack Connor, racing from the blue grade, has came on leaps and bounds over the course of the 2021 season, and took a fine race win for his efforts, with Kenzie Bell and the visiting Finley Kew rounding off the top three. There would be no joy for World Champion, Layton Hughes though, as he found himself disqualified for a technical infringement. Heat 2 of the night would see 20+ karts on track again, but with the rain steaming down by this point!! A brilliant race from the youngsters would see the star and superstar drivers battle their way through the grid superbly, with Scottish Champion Hamish Plenderleith taking the race win, overcoming Jack Connor in the closing laps after a fantastic tussle whilst navigating the back markers. Kew completed the top three yet again, with Layton Hughes and Kenzie Bell finishing just behind him. The meeting final would see the karts lined up in graded order, but based on points scored from each of the races determining where they would start in the grade. Jack Connor would start at the front of the blues, having been top point scorer on the meeting, whilst Kew would start at the front of the red grade. As the green flag drop, the spray would kick up off what was becoming a waterlogged track, but the weather didn’t phase this group of kids, as they kept the foot down, and drove superbly. A fantastic race from start to finish would see Englishman, Finley Kew take the final win – in what will be his final race in the Ninja Karts at Lochgelly Raceway!! Jack Connor would finish 2nd place, and secure the JusBounce Shield in being the top scorere on the night, with Layton Hughes and Hamish Plenderleith just behind! Plenderleith would score enough points on the night to secure the 2021 National Points for the Ninja Karts – opening up a gap that is unable to be caught with just 1 meeting remaining, congratulations to Hamish in what has been a brilliant battle throughout the year with Eevie Ford, Dougie Kidd, and Kenzie Bell!! A few big shunts throughout the night for the Ninja Karts seen the most yellow flags for quite some time, but thankfully, the kids walked away relatively unaided in the best part – they are a tough lot, and will no doubt be back again this Saturday night!!!

The Junior Productions were a late addition to the programme, replacing the Classic Hot Rods. Despite the late notice, there were still a good amount of cars made it out on track and provided some more great racing! The battle for the National Points will go to the wire in the Juniors, as Koddi Wright led by only 1 points going into this meeting, though, that has now been turned around, with Jase Walle now leading the points championship! Walle did himself no harm at all, as he took a race win in the opening race of the night, benefiting from the docking of Jack Baird – who drove brilliantly all night in the torrid conditions. Koddi Wright would take a runner up spot behind Walle. James Slater was another driver in great form in the wet conditions, storming through the pack from the blue grade, and battling for race wins in heat 2 and the final. Lennon Grant, Jack Baird and James Slater, had some brilliant racing between them as the trio challenged throughout the night. It would be Lennon Grant that would take a double race win though, which will see him move upto red grade as a result, with Slater finishing 2nd in heat 2, and being docked from 1st position in the meeting final, much to the youngsters frustration. There were consistent results from Leonna Anderson as well, as she managed to avoid any major mishaps, an improvement on the previous weekend where she was caught up in most!!!

The CC Rods seen yet another strong field of cars in action, with just under 20 cars racing around Lochgelly Raceway. There would be a hat-trick of race wins for Robbie Holler in what was only his 2nd meeting in the formula, whilst fellow newcomer Lewis Wilson would take away 2 runner up spots in the 2 heats. Vernon Sutherland took away a podium finish in heat 1, whilst John Downs would take away a third place in heat 2 – giving the lower grade drivers a bit of a whitewash over the star graded drivers!! The meeting final would see Raymond Brown and Dylan O’Donnell take away 2nd and 3rd spots – with both drivers having some epic battles throughout the night with absolutely nothing between them at times.

The 2.0 Hot Rods welcomed a couple of visitors in the shape of World Champion James Morris, and British Champion Conor Hughes, whilst former Lightning Rod World Champion Frankie Cunningham made his debut. There was also a debut for CC Rod driver Craig Mason, who found the going tough in the rear wheel drive car in the wet conditions!! Greg Honeyman found good pace in his car, so much so that he swept to an emphatic double heat win, which would see him start on pole position for the meeting final. Cameron Willacy and Jason Secker had some fantastic battles throughout the evening, with the pair spending much of the evening door to door – with some of the best hot rod racing we have seen this year from the 2 champion drivers! Mark Dews seems to be enjoying the wet conditions of late, as he continued to pick up another good haul of points in the conditions, that he claims to dislike!! Heat 1 seen Honeyman lead home Willacy and Secker, whilst heat 2 would see Honeyman lead home Dews and Secker. The meeting final seen Honeyman drop back the field following a coming together with 144 which seen the Honeyman car spin around. Willacy would go onto chase down Jason Secker again, and battle bravely on the outside line, with room being given by the Scottish Champion on the most part. With the wet conditions though, it wasn’t easy to keep a tight line, and at times, the 529 car would run wide forcing the 144 car out of position a bit more than he would have liked, which seen him shown the black cross. Secker would cross the line first, though, Willacy did his utmost to take the place on the final laps again. Jock Campbell crossed the line in third place, but 2nd and 3rd would move up a place, with race winner Jason Secker demoted to third.

The National Hot Rods were back in action at Lochgelly Raceway again, though with a few cars less than we had hoped for. The drivers in attendance though, did put up a good showing, as they were all fairly evenly matched in the torrid conditions. James Mooney and Matt MacPherson had some great battles, whilst Roy Anderson and Marc Spence likewise had some superb battles throughout the night, with absolutely nothing between them at times. Roy Anderson, a firm lover of wet conditions, would take a heat and final double, whilst Marc Spence would take the other heat win, as the Nationals rounded off the final round in 2021.

We are back at Lochgelly Raceway this Saturday night with the Back 2 Basics Bangers, Superstox Scottish Championship, Stock Rods, Ministox and UKMC Ninja Karts. First race, 5pm – Join us then!!