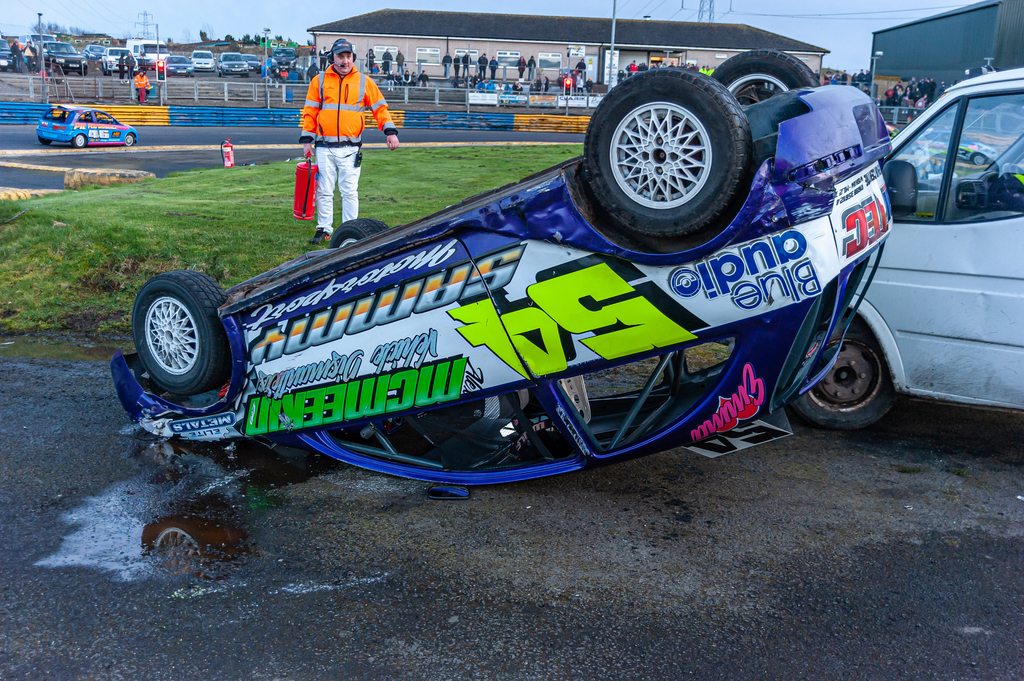 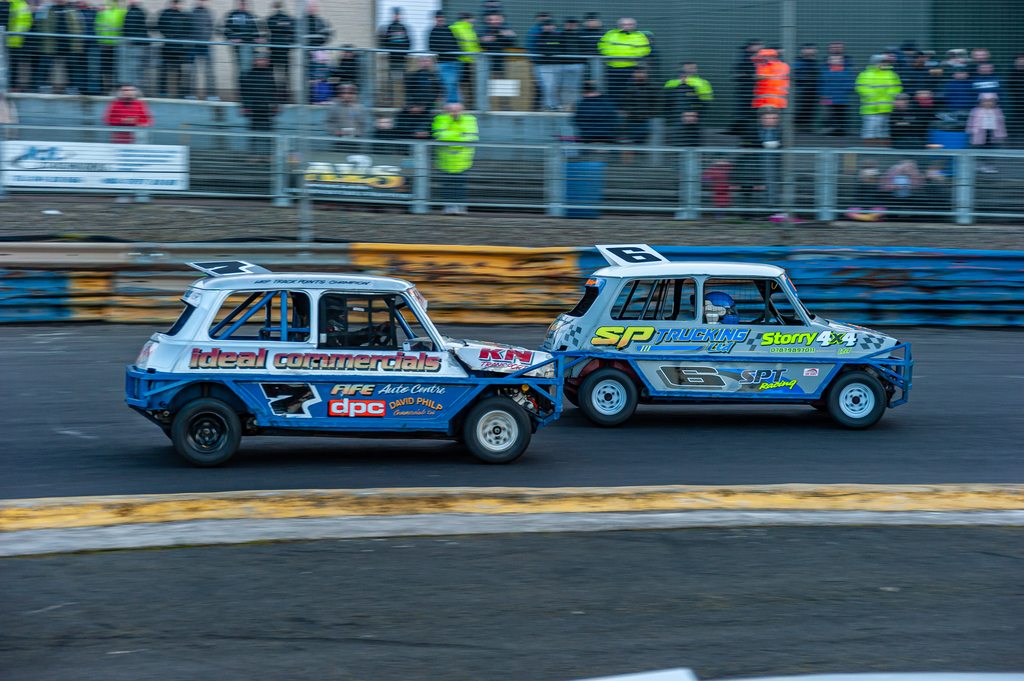 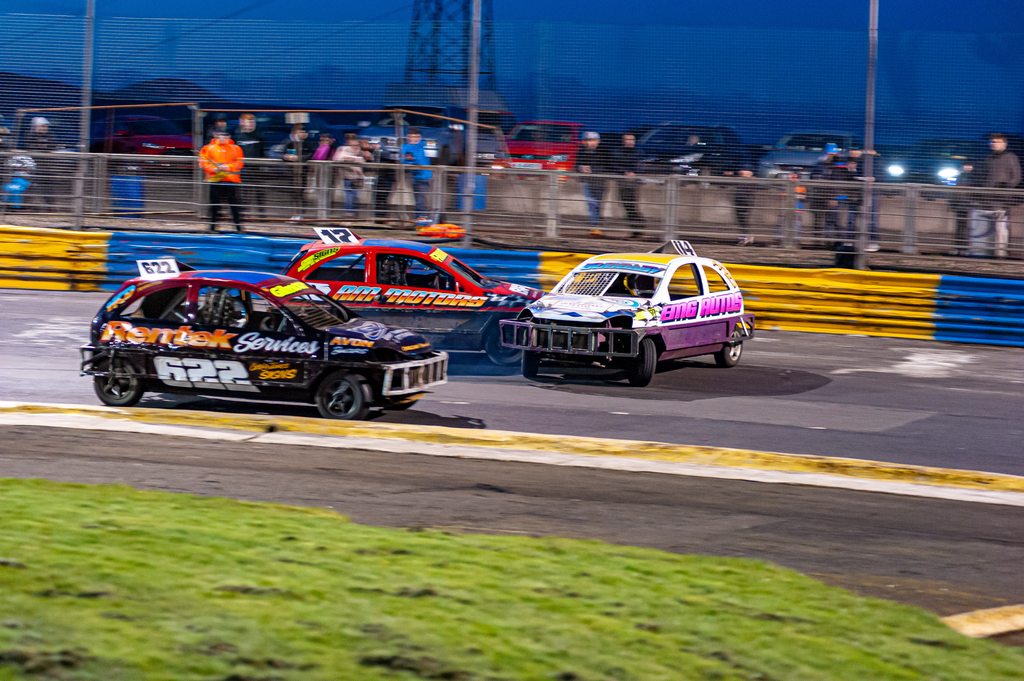 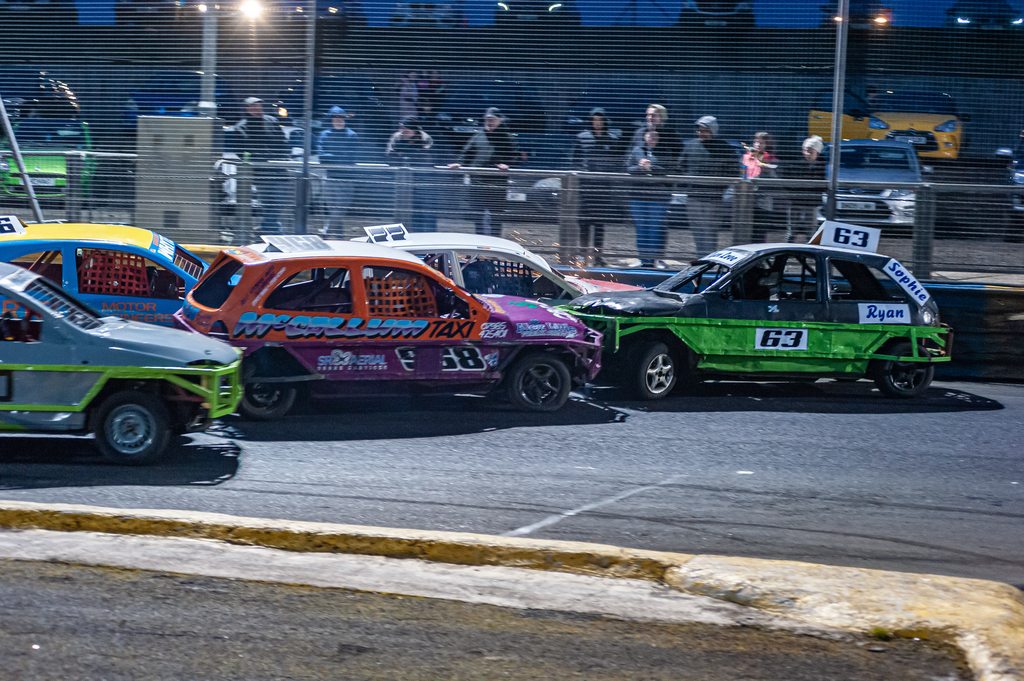 There was plenty of action on Saturday night at Lochgelly Raceway, as the 1300 Stock Cars, Ministox and Stock Rods all served up some eventful racing. The ProStocks provided some good racing, though lacked in numbers somewhat, with the 2litre Bangers also in attendance.

The 1300 Stock Cars continued their excellent start to the 2022 campaign, with another meeting with 20+ cars in attendance, and another 4 new or returning drivers. Bobby Gold made a return to action, whilst their were 1300 Stock Car debut’s for 50 Harry Adams, 63 Ryan Love and 252 James Robertson. Gold showed his experience, as he faired best out of the quadruplet of drivers, taking away a decent haul of points on his return. James Robertson and Harry Adams both had steady starts, though ran into some car issues throughout the meeting. Ryan Love was in the thick of the action as he fought with his car throughout the night, but did cause for some hair-raising moments!! Fraser Clark continued where he left off at the season opener, as he took a race win in the opening race of the night, finishing ahead of Blair Robertson and Stuart Farrell. Mike Courts looks to have found some of the issues that plagued him a few weeks back, as he managed to get his car across the line in 4th place in the opening race, before being caught up in the latter races. Recent ministox graduate, Kai Gilmour, continued his impressive start in the formula, racing clear in heat 2 as he took a relatively comfortable race win, with Fraser Clark pipping Kyle Hegg to the line for the 2nd and 3rd places. Gregor Whyte looks to be settling in fine in the ex Graham Osborne car, as he battled his way to another good haul of points on the night, capped off with a 4th place finish in heat 2. The meeting final had a bit of everything, and was a brilliant race, where you couldn’t quite predict what was going to happen next!! Fraser Clark and Kyle Hegg had a brilliant race throughout, as both drivers battled their way through to the front of the field, before Fraser was wiped out by the inexperienced Ryan Love having took the lead of the race. Hegg, must have noted this, as he closed up on the 63 car shortly afterwards, with an interesting last lap of the race developing!! Hegg gave the Love car a push out wide on the last corner of the race, as he looked to come up the inside of the back marker. However, on the exit of turn 4, Love appeared to lose control of the car as he swept across the track from outside to inside, catching the tail end of the 715 car, sending Hegg into a spin as he approached the finish line – thankfully for Hegg, his car crossed the line before coming to a halt backwards against the armco under the starters rostrum, with Martin McCaffery finishing in an excellent 2nd place, and visiting driver, Billy Newman crossing the line in 3rd!

The Stock Rods seen a good field of cars, with some new drivers making an appearance as well, with many more still to come. There were debut’s for Fraser Anderson, and perhaps the most furthest travelled, Mark Curran – travelling from Shetland to be with us in an ex Sneddon car. The first race of the night seen a couple of big flash points – a pile up on the home straight following on from Jamie Doyle getting out of shape out of turn 4, and in the process of trying to control the car, spun back across the track only be to collected by the oncoming traffic, including Gary Dean and Chris Lattka with only Lattka able to rejoin out of the trio. Substantial damage on the Doyle car meant that he wouldn’t make it back out for the further races. Sam Pate has a big rollover, having run over the infield kerbs on turn 1 and 2, he quickly found his car veering towards the infield area, though collected a marker tyre, which flipped his car over and into one of the recovery vehicles!! Thankfully, Sam was ok and able to walk away from the scene, and even managed to get his car back out in the following races! Jamie Stewart took the first heat of the night, with David Crichton and Niall McFerran completing the top 3. Stewart would find himself docked in heat 2 though, having been found guilty of disobeying the blue flag rule, which dopped him out of the point scoring positions as a result. Stewart Paterson had a much improved night compared to last week – as he took TWO race wins – heat 2, and the meeting final as well. The meeting final was a strong, but gutsy performance from the 46 pilot as he got away first off the line, and was quickly holding off a train of cars for the duration of the race. Siobhan Martin and Chris Lattka took away 2nd and 3rd positions.

The Ministox, as is the norm thesedays, provided another great night of racing, with 20+ cars again in attendance. Kerr Paterson, Ollie Sime and Caidan Abernethy made their Lochgelly debut’s in the formula. Sam Cavanagh has started the 2022 season off in good form, showing good pace, and managing to steer clear of a lot of the incidents, and took a deserving race in in the first heat of the night, leading home Jake Wilson and Rian Mitchell, who made his first appearance of the season at Lochgelly Raceway in his re-worked car. Charlie Hardie would have been thinking it was going to be another one of those night’s with no luck on his side, as he was spun out in the opening race losing a lap or so in the progress, but made amends in heat 2 as he swept to his victory. Ethan Gemmell took an excellent 2nd place finish, whilst Scott Allardyce completed the top 3. Robbie Armit had a poor night in comparison to the season opener a couple of weeks ago – but found his pace come the meeting final as he took an excellent win in what was a stop start race with a couple of yellow flag stoppages! Jake Wilson and Charlie Hardie completed the top 3 in the meeting final. Arguably, the driver of the meeting, Hamish Plenderleith fought from the rear of the grid throughout the night in only his second meeting in the Ministox, but managed to walk away with some points in what was a strong field of cars.

The ProStocks started the 2022 season off with an element of doubt and frustration at some of the upcoming rule changes, though car numbers managed to squeeze into double figures – with the hope that a few more cars are still to make an outing. There was a ProStock debut for Cameron Archibald, whilst Mark Boyle made a welcome return to action. National Points Champion Darren Rae, continues to be the driver to beat, and started his 2022 campaign off in excellent fashion as he took a race win in the opening race of the night, though was caught up a couple of times in heat 2 which hampered his progress. There was a fine win for Gavin Ritchie, who romped clear of the pack in heat 2, finishing ahead of Grant Barker and the aforementioned Darren Rae. The meeting final seen Grumm Fleming take a win in his new car – which is immaculately turned out, and looks to be going well as well. Gavin Ritchie and Mark Boyle completed the top 3 in the meeting final.

We are back this Saturday night, with the 2.0 Hot Rods, UKMC Ninja Karts, 1300 Stock Cars, CC Rods and UKMC Junior Productions – 5.30 start time.