Back with a Thud!

Back with a Thud! 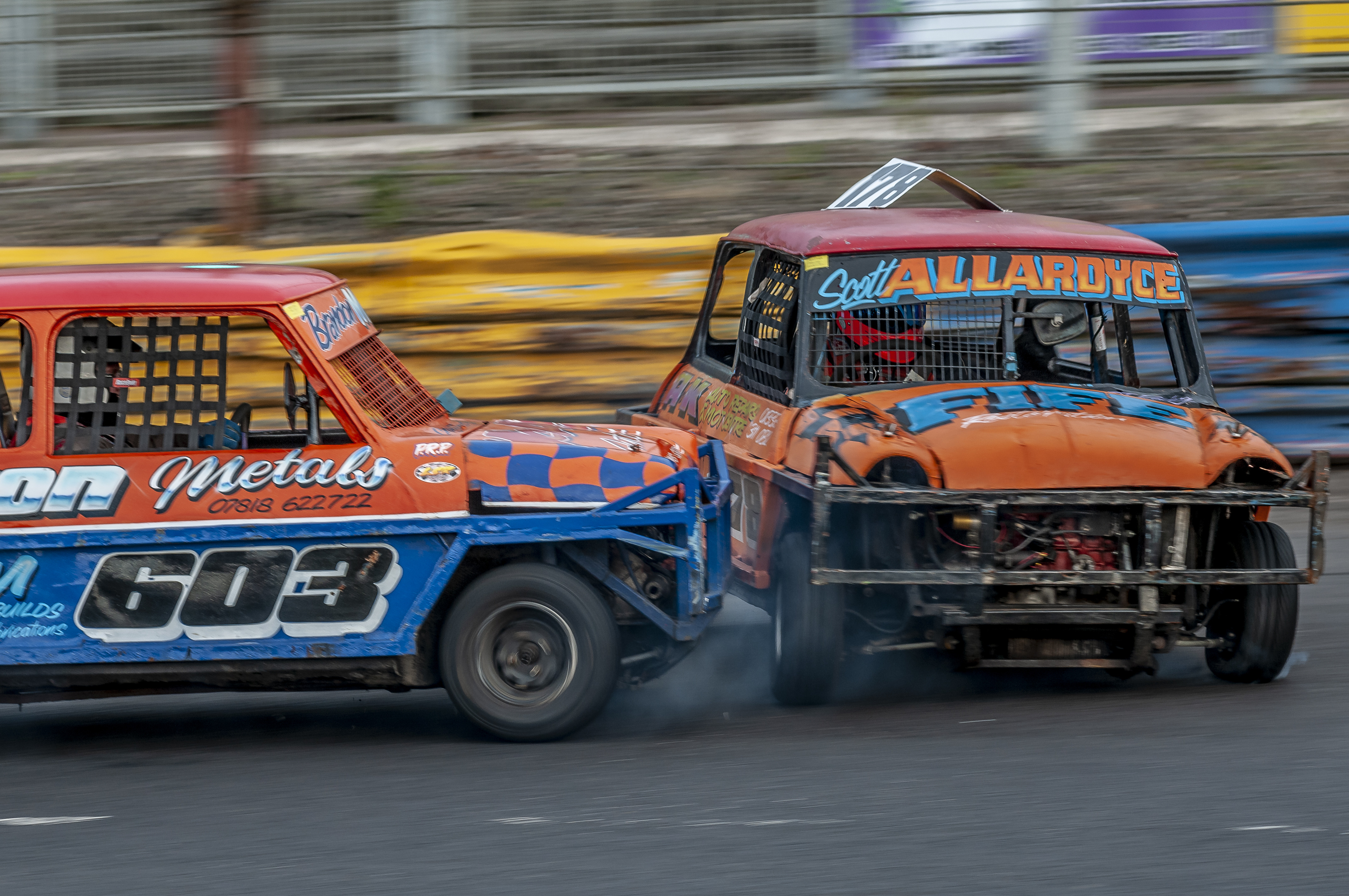 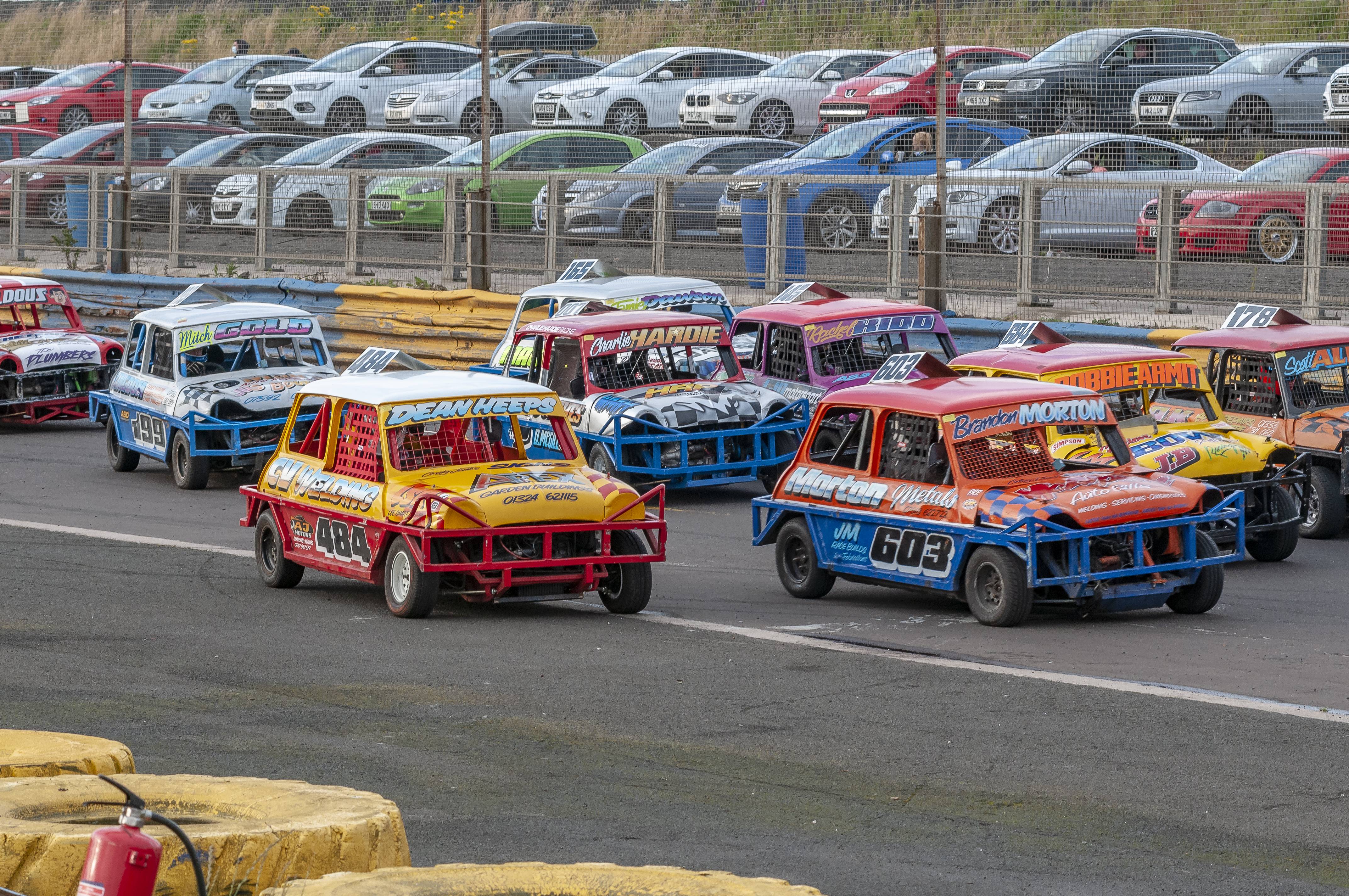 Stock Car Racing resumed at Lochgelly Raceway on Saturday 25th July in a ‘Drive In’ only style event for spectators.

What a way to return to racing it was, with some exceptional racing throughout the night, with several talking points that will whet the appetite for forthcoming events!

The Ministox kicked off proceedings with an excellent 24 cars in attendance, including East Anglian visitor Alfie Aldous, whilst there was a debut for Warwick McClymont. The opening race of the evening was under way and with being away for a few months, the racing seemed so much faster than how we remembered it! Former Ninja Kart star, Bailey Millar drove excellently to take his first win in his Ministox career in the opening race, finishing ahead of Alfie Aldous and Ryan Borthwick. The second race of the night for the youngsters seen silver roof Alfie Aldous race from the back of the grid expertly through to the front to take an excellent race win ahead of HRP Points Champion Mitchell Gold and the ever improving Charlie Hardie. Alfie was a joy to watch as he navigated through the field, knowing when to use contact and reading the race. The meeting final seen the bumpers going in thick and fast amongst the youngsters, with Bailey Millar and Rachel Kidd being spun out in the early stages of the race. Mirran Adams continued to show great improvement as well, as with each race she participates in, seems to grow in confidence, and come the meeting final, was challenging for points and holding a solid line. It was Charlie Hardie though that raced through the field most efficiently in the meeting final, taking a fine race win ahead of Ryan Borthwick and Alfie Aldous. With time on our sides, the youngsters were given an extra race as a reward for their efforts throughout the night. It was East Anglian Superstar Alfie Aldous though, who had made the biggest strides early on as he raced into a good position in the early stages, before closing down on the race leaders. Ryan Borthwick who himself had had an excellent night, was in no mood to give up the front position without a battle, and hung onto Alfie Aldous for a few laps before Mitchell Gold and Bailey Millar were involved as well, making it an excellent three way battle for 2nd place. Bailey showed great determination to hold off those around him and claim second place, with Ryan Borthwick finishing third, with Mitchell pulling off in the closing stages.

The ProStocks never fail to entertain at Lochgelly Raceway, and with a reasonable amount of cars for the resumption of the season, there was plenty of on track action throughout the evening. With less than half cars finishing the each of the races, there was a fair amount of damage sustained! Debutant Callum Elliot did reasonably well, although sustained some damage which seen his racing curtailed somewhat. Stuart Hall, a newcomer when the season originally kicked off in March, seems to have found his feet in the formula, getting involved in the action, and taking away a 1st and 2nd place for his efforts as well! Jason McAlpine and Ross Stewart had a couple of comings together throughout the night, with both giving tit for tat, cumulating in both cars failing to finish 2 out of the 3 races! The meeting final seen Ross Stewart lead in the closing laps before a coming together with McAlpine on the last lap, seen the race stopped and both cars out of the race. Race wins went the way of National Points Champion Ian Christie, Stuart Hall and Graeme Fleming!

The non contact Stock Rod class started off the evening with good numbers, although a combination of engine trouble, damage, and falling foul of the rules, seen a few cars drop out of the running! The opening race of the night seen Ian Low take charge in the early stages of the race, before coming under pressure from the chasing pack behind, including Ross Graham, Dean McGill, Chris Lattka and Siobhan Martin. The cars drove bumper to bumper, and side by side for a number of laps as they tried to overcome the 31 machine. A couple of comings together seen Low lose control of his car and collide with Stewart Paterson and Chris Lattka. This allowed Dean McGill through into the lead of the race, followed by Siobhan Martin, whilst Lattka recovered, Paterson spun around. Heat 2 seen Craig Mason make an excellent start to his Stock Rod career – picking up a race win in his first meeting, whilst Paul Wilson, making a return to racing, brought his car home in second place – an excellent finish for the M90 Autosport team! The meeting final seen Dean McGill take his second victory of the evening, holding on from the challenge from Chris Lattka and Siobhan Martin not too far behind!

The 1300 Stock Cars seen 20 cars take to the track, and all with everything to race for! Jamie Stewart made his debut after graduating from the Ministox and Junior Production classes, and immediately was on the pace – roaring to a heat and final double which will see him elevated to yellow grade for the next meeting! It wasn’t all plain sailing for Stewart though, as he was on the receiving end of a big hit from Kyle Hegg in the second heat of the night, resulting in his car being tractored off the raceway! Andrew Mathieson, returning to the class in the 2020 season, looked on the pace all night as well, managing to go away as the top point scorer on the night, picking up a win and 2 second places. Douglas Ford and Fraser Clark both looked quick throughout the night and both will be looking to challenge for the track championship as the season draws on now that we’re back under way!!

This coming Saturday we see the Back 2 Basics return to Lochgelly Raceway, whilst the UKMC Ninja Karts, CC Rods and Superstox all also feature! Book your trackside parking slots online today via the advance tickets section on the HRP website.

The respective points charts have been updated on our website following on from this meeting.
View event laptimes on Speedhive