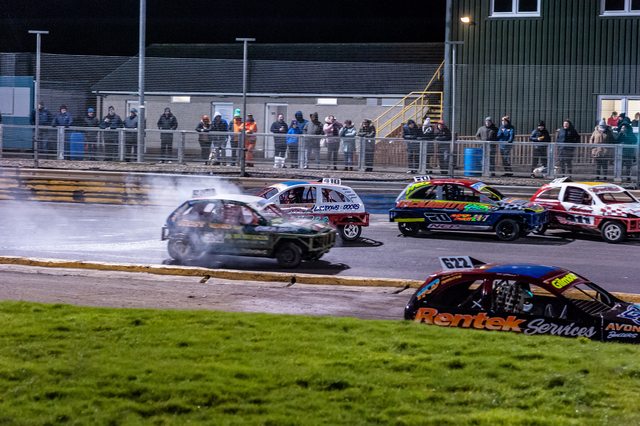 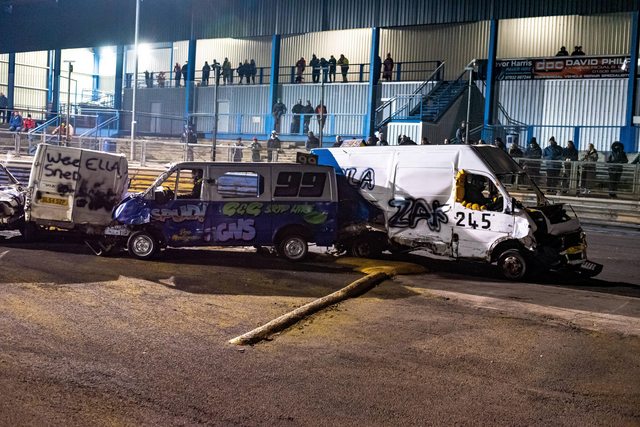 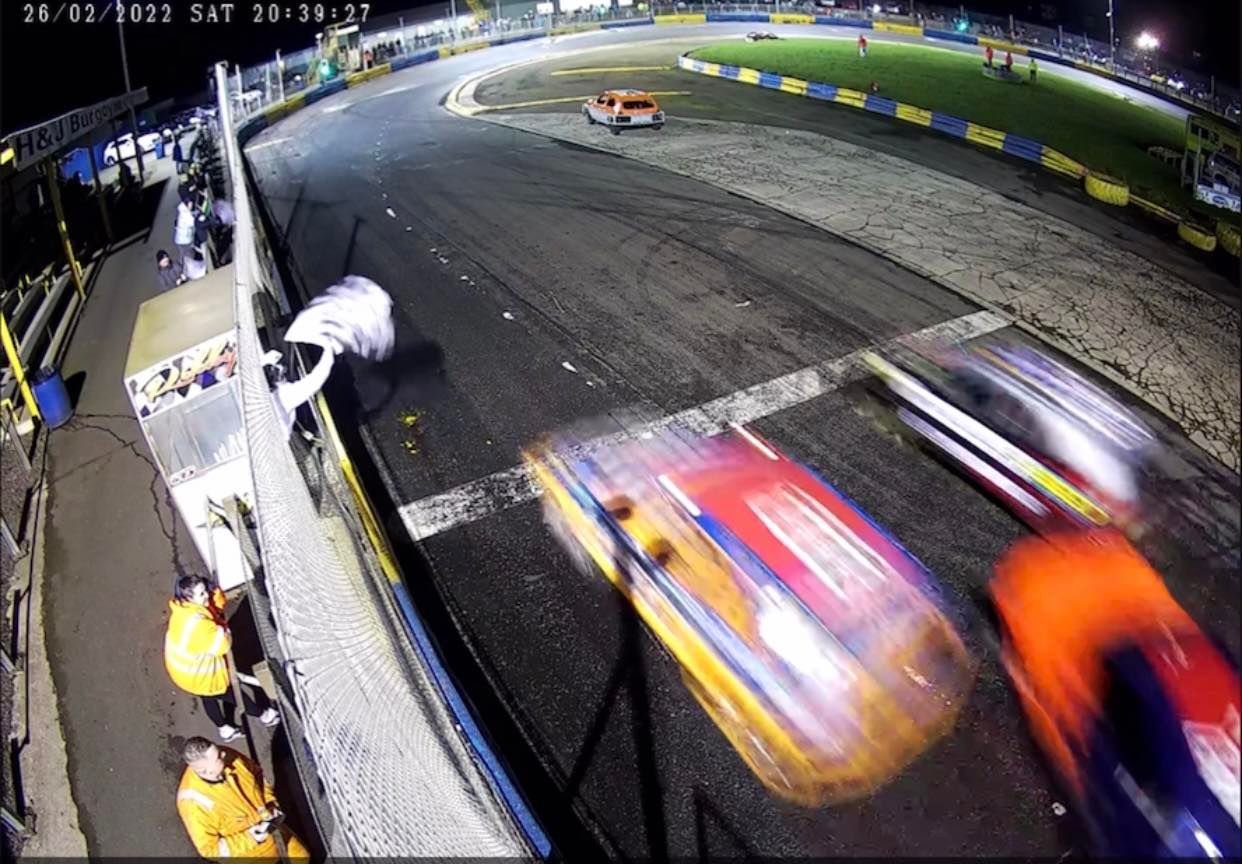 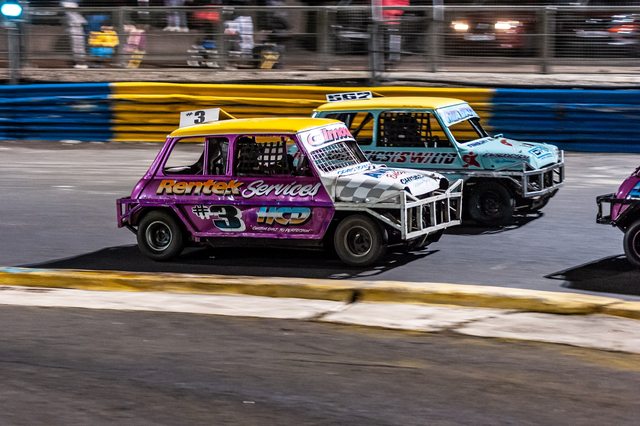 It was great to be back at Lochgelly Raceway on Saturday 26th February for our 2022 season opener.

The Shaun Walsh Memorial event headlined the bill for the Van Bangers. Despite a lower turn out of vans than had been hoped for, the Vans provided some excellent entertainment throughout the evening, with lots of on track action, including a rollover onto it’s side from the Andy Nelson van. Chris Thomson took the Walsh Memorial – an event that he rarely misses given that he was a close friend of Shaun, and one that he will have been delighted to have won! Lee Clarke turned out an impressive paint scheme on his van, though ran into bother in the first 2 races, before he got it motoring in the final race of the night, as he swept to a victory – although, it looked at risk at one stage after he ran into the back of another van and it appeared that his van cut out. Lee however, managed to get it going again to claim victory. Zak Murdoch went onto claim the win in the Demolition Derby that rounded off the evening for the Van Bangers.

The CC Rods were in good form, with some excellent racing throughout the pack. A closely matched pack of cars provided some scintillating racing as the drivers duelled in packs throughout the evening, although, it would be Raymond Brown and Andy Nelson that would take the race wins – Brown taking a heat and final double, with Nelson taking the other heat win. The midfield battles throughout though, were the battles to watch as in each of the 3 races, there were several occasions where groups of upto 6 cars were battling it out in no more than a few car lengths distance on track, keeping everyone on their toes and providing some nail biting racing as a consequence. 2021 Points Champion, Kevin Hutchison had a difficult evening battling it from the back of the grid, but scored consistently in all races.

The Ministox, one of the most consistent formula in recent years, yet again provide some superb racing – just over 25 cars took to the track for the opening heat of the night which made for some fast and frantic racing as a result of the star drivers having to battle it through the field. Robbie Armit looks like he has returned with a point to prove having missed out in much of 2021. Armit drove excellently as he stormed to a heat win in the opening race, with a runners up spot in the 2nd as well. Jake Wilson, another driver that was in great form on the night, also took a heat win and runners up spot in the heats, before crossing the line 1st in the final, but upon review, was docked for starting in the wrong grid position in the red grade following his earlier race win. Three English visitors were welcomed in the shape of Mia Batten, Austin King and Bobby Beere-Rees, with Austin King fairing best out of the three. Maddison Gilmour drove superbly in the meeting final and despite crossing the line in 2nd position, was later elevated to 1st following a review of the starting positions for a couple of drivers. There was an entertaining battle between Charlie Hardie and Lewis Burgoyne through much of the races, with both drivers giving each other a fair whack on a couple of occasions!

The Junior Productions are yet again seeing the formula grow considerably, with 17 cars taking to the track on Saturday night, and several more still to make an appearance, the formula looks to be on an upwards spiral. Connie Anderson and Kaitlyn Smart both put in brilliant performances from the lower grades, with both drivers taking away a podium finish on the night – both drivers securing 2nd place in each of the 2 heats, much to the delightment of both girl racers. Callahan Bremner is another driver who looks to have found his feat in the formula, as he raced to a hat-trick of top 5 finishes on the night, which will set him up well for the season ahead. Northern Ireland’s Jack Morrow had some epic battles with Koddi Wright, with both drivers battling side by side or bumper to bumper for much of the night – although, both drivers did fall foul of the steward on the night in separate races. That didn’t detract from what was a super night of racing from the youngsters all in all, with every driver putting in a shift to earn every single point!

The 1300 Stock Cars are likely going to be, the formula of the season in 2022 – with a lot of drivers registered. There were around 25 cars on track on Saturday, and from the outset, the bumpers were going in!! Jacob Roff, visiting from England, was in fantastic form – battling for the lead of all 3 races on the night, though had to settle for runner up in 2 out of 3, and just missing out on the top 3 in the meeting final. Fraser Clark looks to be back to his best, taking 2 heat wins, before failing to finish the meeting final. Craig Haxton was a late booking due to potential work commitments, but was with us and in form as well – taking 2x 3rd place finishes on the night. There were some spectacular moments throughout the night, with 2 shootouts with a couple of yellow flag stoppages in the closing lap(s). The meeting final was the one that will have everyone talking though, as Kyle Hegg looked clear for the win, before a thumbs down from Chloe Baird resulted in a yellow flag as the 715 car was on the last corner. A 1 lap shootout was called for, with back markers removed from play in the top 6 positions. Hegg would lead the pack away and was quickly under pressure from Roff, Haxton and Danny Whyte. Bumpers would go in on turn 1, and then again on turn 3, with Hegg dropping down the places on turn 1 and 2, before a big hit going into 3 and 4 would see him move back up the inside of the cars ahead of him – it was a drag race to the line, with Whyte and Hegg crossing the line just 0.001 seconds apart, with Whyte being awarded the win based on the transponder system result. Haxton would be spun across the line to take 3rd, with Roff taking 4th position! Ally Strachan finished just behind as he took an amicable 5th place finish.

We are back in action on Saturday night, with a 530 start time. Spectator gates will open at 3.30pm. The Superstox, 2.0 Hot Rods, Ninja Karts, National Hot Rods and Stock Rods all feature, and again, we look set to welcome a few visiting drivers! Join us then! 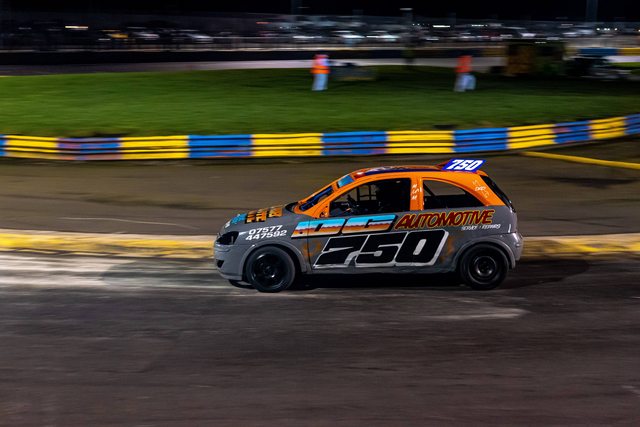