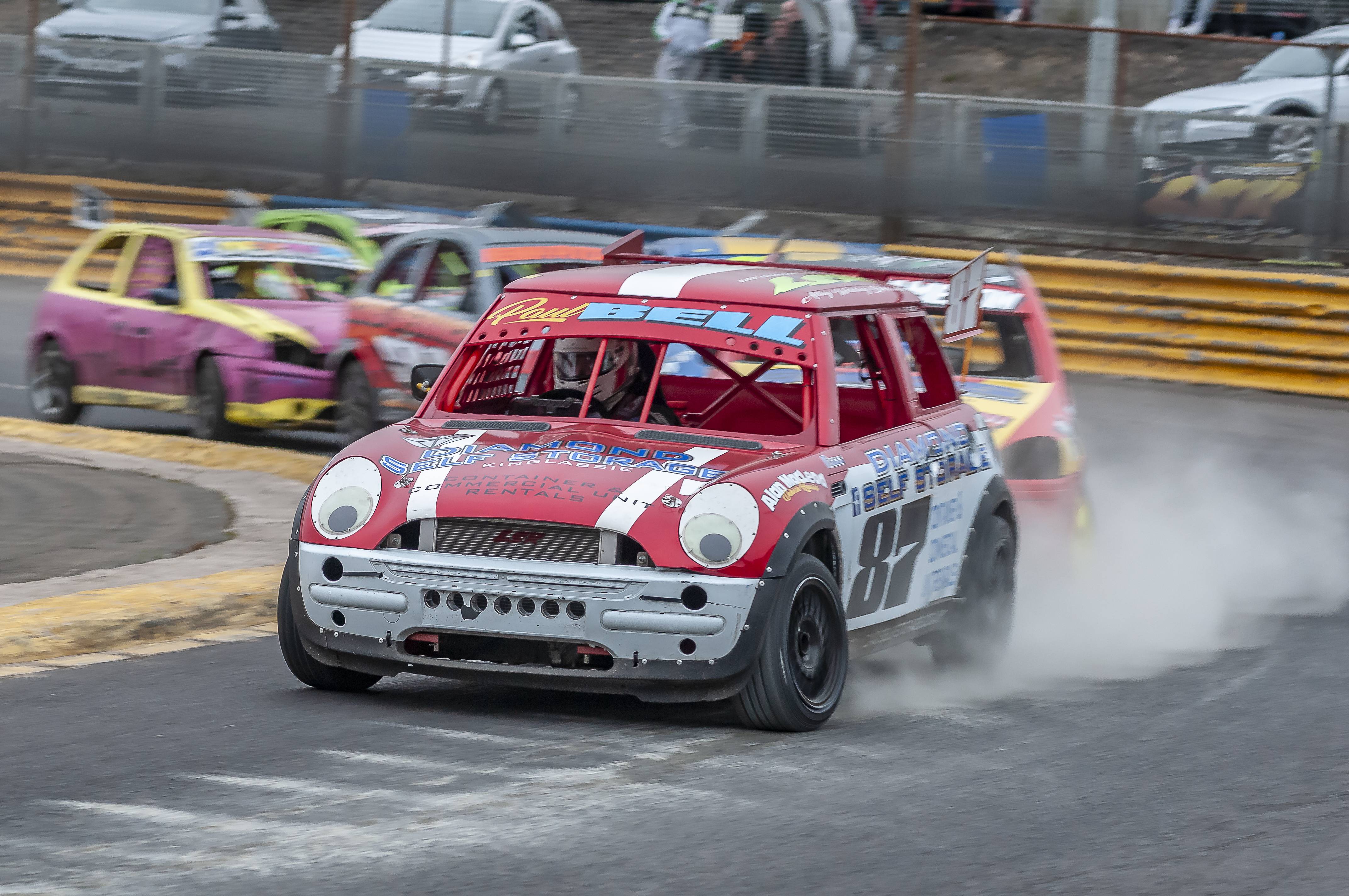 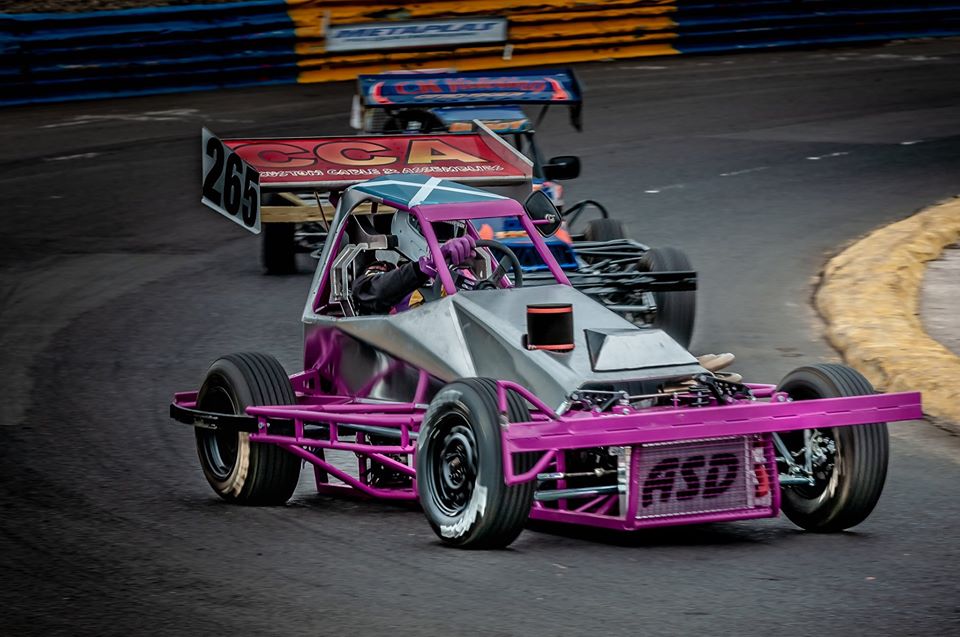 Saturday 15th August was the 4th meeting held at Lochgelly Raceway since the racing season resumed. The drive in viewing was again filled to capacity as Scotland’s stock car supporters managed to get there racing fix, albeit having to remain within there vehicles.

The Junior Productions are turning out to be quite a good formula, with ever increasing car numbers, with some excellent racing on offer from the youngsters, if not a little rough at times. Samantha Rogerson, a newcomer at the beginning of the season has came on greatly over the lockdown period and into the last couple of weeks. A decent points haul on Friday 7th, was added to on Saturday night as she took an excellent race win ahead of Jase Walle in the opening race of the night for the formula. John Bremner fell foul of the race steward for contact in the opening race of the night, but continued his excellent form as he takes the challenge to Koddi Wright and Harvey Sneddon in the battle for the points championship, as he took another race victory, in the 2nd heat of the evening. Koddi Wright and Jack MacLeod followed Bremner across the line in a lively race that seen only 7 cars complete the distance! Jack MacLeod, another newcomer at the beginning of 2020 is beginning to show that he is a force to be reckoned with as he took the meeting final victory, adding to his win that he took last weekend! Jase Wall and John Bremner completed the top three in the meeting final in the Junior Productions. John Bremner continues to lead the points charts, though has seen his lead reduced to just 2 points with Jase Walle in hot pursuit!

The CC Rods again, were in excellent form – the class certainly is providing a mixed bag of race winners in 2020 which is great for competition, and provides a great spectacle for viewing. David Glencross took the opening heat of the night, snatching victory from Paul Bell after an error allowed Glencross to capitalise in the closing stages. Glencross’ night would go downhill from there though, with a host of issues in the further races meaning no further points finishes. Paul Bell though, made amends in the following races, taking a heat and final double in his BMW Mini CC Rod, setting some of the fastest laps on the night as well as he continues to tweak the setup between events. Although a heavier car than most others on track, the Mini certainly seems to be a match, and it could inspire a few other drivers to go down that road in the coming seasons! It’ll be interesting to see how he copes from yellow grade next time out following his 2 race wins. Ryan Cameron continued his excellent run of form as well, taking 2 2nd place finishes and a 3rd on the night – a set of results that will likely seem him pushed up through the grades at the end of August. A reshuffle of the grades in a couple of weeks time will challenge the likes of Bell, Cameron who may have to fight a little harder for those points!! The points championship in the CC Rods looks like it could go to anyone in 2020! Ian Taylor currently leads the way, however has now sold his car. Brian Allen is just behind Taylor, with Brandon Gourlay and Ryan Cameron within touching distance too!

The Superstox class has had an excellent few meetings with some super competitive racing over the last few weeks! It was a pleasure to welcome Dan and Chris Roots to Lochgelly at the weekend, with both drivers going away with some silverware for there efforts. Dan Roots got off to a perfect start, taking the first race of the evening ahead of Chris Roots and Jack Turbitt. Bryan Forrest was out in the borrowed Alisdair Noble car, with his car undergoing a few changes in the garage at the moment. This change in machinery perhaps meant a lower average score on the night than Forrest is used to, but Bryan will be satisfied with taking away a decent haul of points that keeps him at the top of the National and Track Points championships, although the gap at the top is reducing, with Barry Stephen now only 2 points behind in the National Points Chart with only a few meetings left before they are completed for the 2019-20 campaign. Evan Clark was a late booking in the week, but he’ll be glad he did after taking his first race win of the season after what was described as ‘some week’ by the driver himself! Barry Stephen brought his KMR car home in second place, with Chris Roots taking up 3rd position. The meeting final seen Barry Stephen get the front of the grid to take his second final win, in as many meetings, with the Roots duo, Dan and Chris taking 2nd and 3rd positions.

The National Hot Rods seen World Champion Robert McDonald take 2 race wins, with James Mooney recording the win in the meeting final, in the first of the Scottish World Qualifying Rounds in the battle for World Championship qualification in July next year.

The National Bangers had a few no shows on the day, with a few transport and car issues put down to the reasoning. Jamie Sangster took 2 race wins, before Brian Youngson took the final and Demolition Derby after coming out on top of a head on impact with Sangster!

We are back in action this coming Saturday with the ProStocks, Stock Rods, 1300 Stock Cars and UK Massage Chair sponsored Ninja Karts. This event is advanced booking only, with bookings able to be made only through our Advance Tickets section of our website – hardieracepromotions.co.uk.