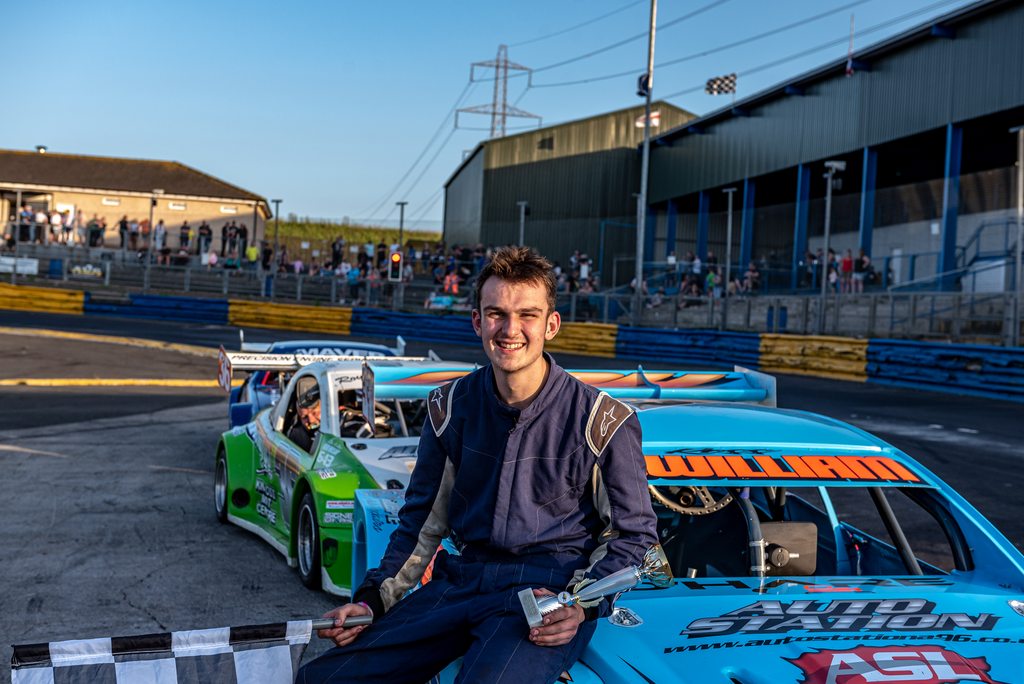 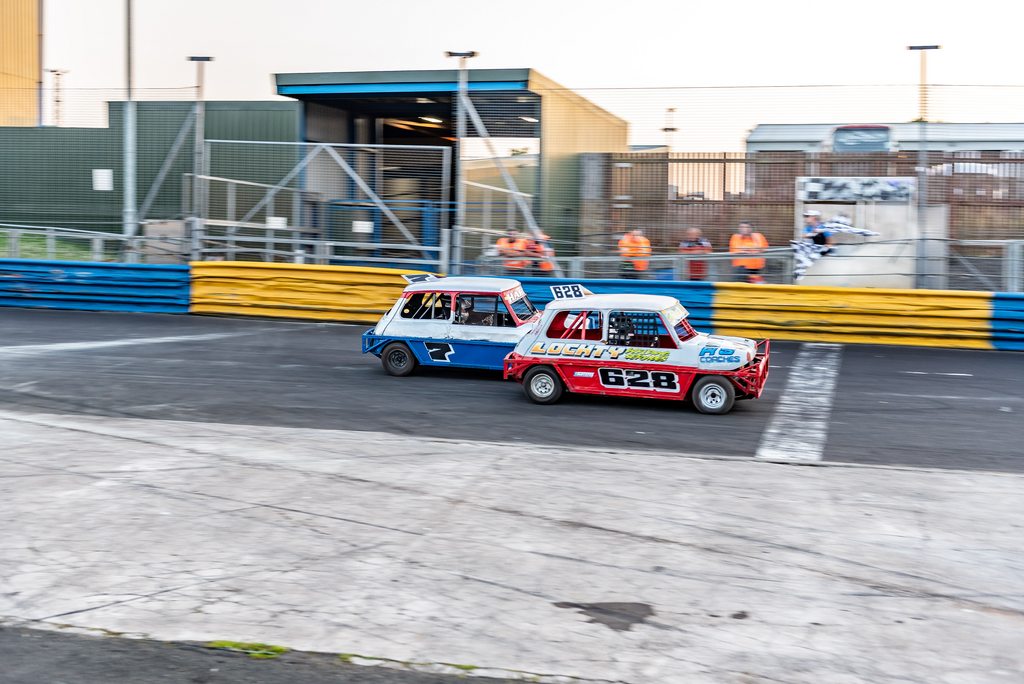 It was good to be back at Lochgelly Raceway following a short break as we warm up towards the tracks anniversary celebration event this coming weekend (24/25 July). The sun shone brightly throughout the day which increased the stickiness of the track, allowing for some fast racing.

The Ministox seen the HRP round take place in the whites and yellows JusBounce series at the beginning of the meeting. 14 cars took to track for the whites / yellows race (those eligible are those that started the 2021 season off as a white or yellow graded driver), with Kyle Rogerson coming through from the back of the grid to take the win following a busy meeting last Thursday at Skegness for the team. Jay Carruthers who himself had an impressive meeting, brought his car across the line in second place, only losing out in the closing stages of the race, with Andrew Scott rounding out the top three places in the first race of the night. Jake Wilson has been in electric form since returning from his suspension, adding another couple of race wins to his collection for the 2021 campaign – which will see him promoted upto red grade come the 1st August – a heat and final double on this occasion. Ross McLaughlin, who was arguably the driver of the night had his best performance to date in the formula, at Lochgelly Raceway anyway, taking a superb race win, whilst battling admirably throughout the night as he walked away with a few top 5 finishes for his efforts. The HRP and Crimond National Points champions, Charlie Hardie and Jamie Dawson had a great battle throughout the meeting final, with both drivers giving no mercy to each other as they traded blows lap after lap for the best part of the race. Whilst not the quickest way around the track, it was certainly an entertaining battle between two of the top drivers in the formula. Scott Allardyce hasn’t had much luck of late, but managed to munster a runner up spot in the meeting final, with Jay Paterson putting in another fine performance at HRP, as he finished in 3rd position.

The National Hot Rods were again down on numbers that we would like to see, however, with Roy Anderson, John Maver and Marc Spence all making outings, it is hoped that a few more drivers will return to action in the coming weeks with a few cars nearing completion. Ross McWilliam swept to a hat trick of race wins on Saturday night, as he blew away the competition. James Mooney continued to show good pace in his car, taking away a 2nd place finish in the opening race of the night for the Nationals, whilst putting in some solid lap times throughout the night. Roy Anderson was glad to be back on track after an absence of over a year, and will be happy to take away a couple of top 3 finishes which will set him in good stead for the campaign ahead.

The first meeting of the new National Points season took place for the Stock Rods as well. The Stock Rod formula provided some excellent competitive racing, which resulted in 3 different race winners on the night. Stewart Paterson took the opening race win of the night, having defended admirably from the pack behind, Paul Wilson took heat 2 of the night, before Jim Pitcaithly muscled his way through to take the win in the meeting final, taking full advantage of a door opening by the early leader Stewart Paterson! If the Stock Rods continue in this sort of form, we are in for one epic season with several drivers potentially in a position to challenge for the honours come the end of the season.

The Superstox, despite having a couple of cars less than normal, provided some super racing throughout the evening, with plenty of bumper work going on throughout the night. Dean Johnston was the driver of the meeting, sweeping to a heat and final double, having had a super battle with Bryan Forrest throughout the night. Great respect shown by the 2 heavyweights, but equally, no holding back as they entertained the onlooking crowd. Bryan Forrest didn’t go away empty handed, as he claimed the opening race of the night. Jack Turbitt continues to impress as he goes from strength to strength in the formula – his confidence is brimming at the moment, and he doesn’t look out of place racing from the blue grade, taking a hat trick of third place finishes away for his efforts as he continues to score well at each of the events this season. Reece Din had his best meeting in the formula since joining the ranks at the beginning of 2021, and led the way for much of the way in the meeting final, before being overcome by the Johnston, Forrest and Turbitt, as he held on for a well deserved 4th place finish.

The ProStocks were the fifth and final formula in action, and as is always the case with the formula, provided an entertaining evening of racing. Jake Mason looks to have found his feet in the formula, having led much of the opening heat of the night before spinning out with a lap or so to go, before picking up an excellent race win in heat 2, followed up by a 3rd place finish in the meeting final. Local drivers, Mark Boyle and Darren Rae took away the other wins, with Boyle taking a heat, with Rae claiming the meeting final. Tam Melrose’s run of bad luck continued, as he blew another engine.

We are back in action this weekend for 2 days of non-stop stock car racing and banger racing. The biggest form of banger racing, the Unlimited Bangers, will contest for the Scottish Championship on the Saturday, whilst the Rookie Bangers contest their own Scottish Championship on the Sunday. The Ministox battle it out for their Scottish and Fife Championships over the 2 days, whilst the Superstox race for the Lochgelly Masters. Tickets and full information available at our website, hardieracepromotions.co.uk.