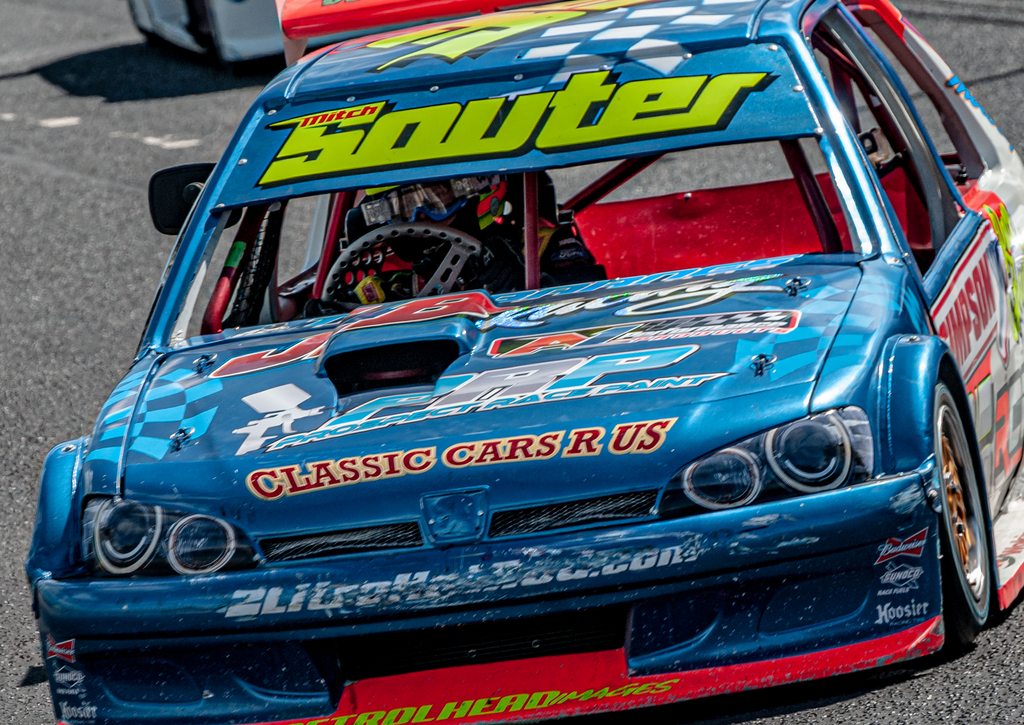 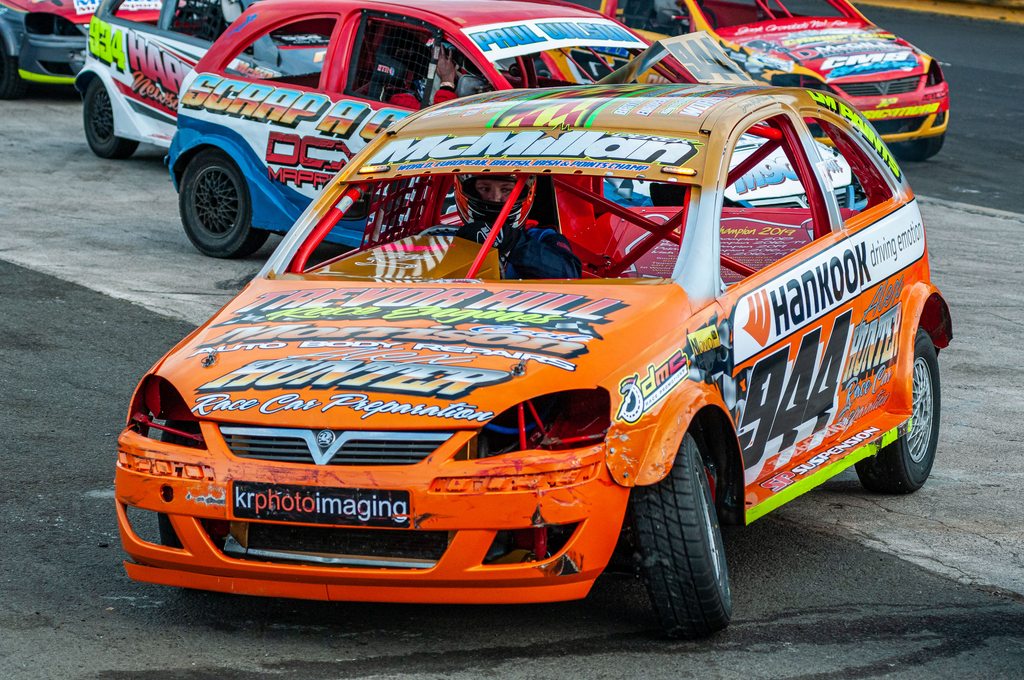 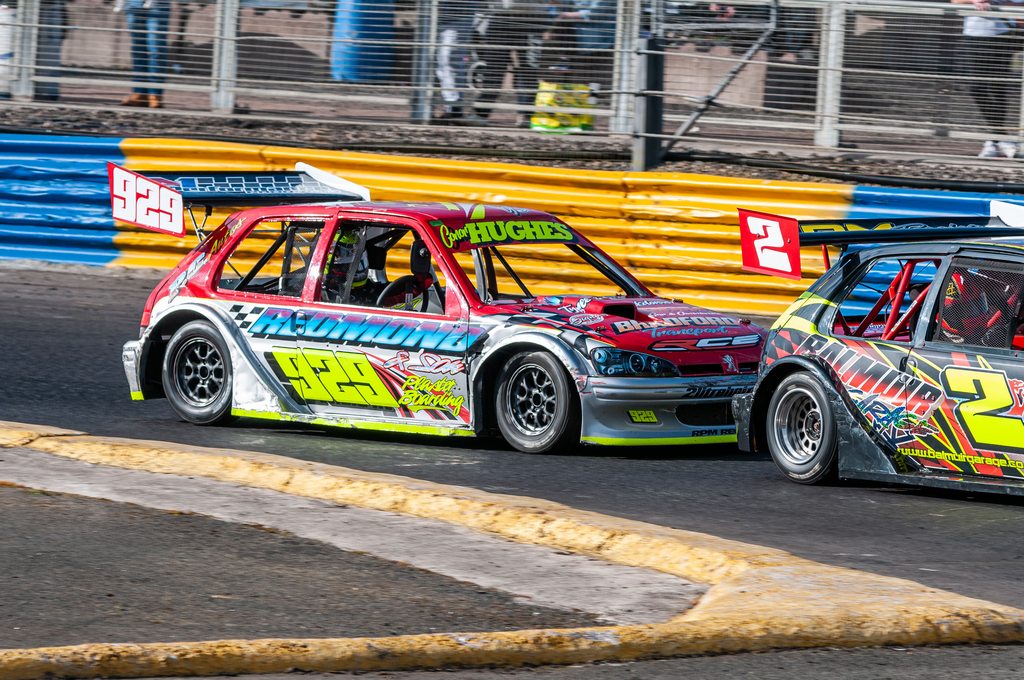 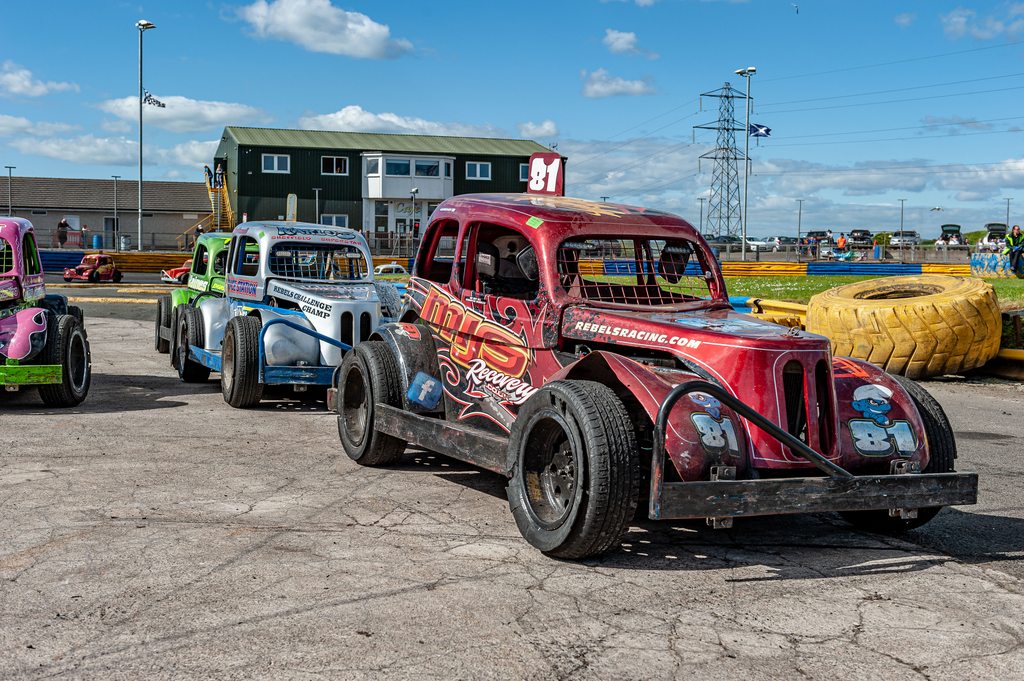 A feast of stock car action at Lochgelly Raceway seen 29 super races take place across the weekend of 5th and 6th June, with 3 major championships also contested for! There was certainly no shortage of on track entertainment as every formula did their utmost to put on a performance.

The 2.0 Hot Rods seen the majority of the formulas top drivers descend upon us as they sought to battle away the 2.0 Hot Rod British Championship crown from Dan Smith. Dan Smith though, wouldn’t go down without a fight as he looked to retain the title, and got off to a perfect start taking the first race win of the weekend for the 2.0 Hot Rods. The racing was action packed with drivers desperate to get as many points on the board as they could ahead of the British Championship race to give them the best opportunity for success. James Morris and Jason Jackson gave themselves the best possible opportunity, with both drivers also taking a heat win in the qualifying races. It was Northern Irish driver Conor Hughes that put himself on pole position have scored consistently in his 2 qualifying races, with Jason Jackson on the outside. 2 rolling laps were had prior to the main race getting underway as the tension mounted within the stadium. As the pace cars left the raceway, it was down to the start marshal to throw the green flag for the start of the race. The drivers behaved well, and maintained grid positions as they awaited the green flag. As the drivers rolled through turns three into four, the green dropped and Conor Hughes got away first, with a few cars coming together behind him which seen outside pole car Jason Jackson spin around, taking a couple of cars onto the infield with him as they moved to avoid him. James Morris was the driver that pursued Conor Hughes and was on his tail for the majority of the race, with Curtis Greer lurking just behind as well. As the laps wore on, William Hardie and Dan Smith both moved up the grid, with them then overcoming Curtis Greer to move into third and fourth places. There would be no change up front though, with Hughes holding on to take the 2020 2.0 Hot Rod British Championship! The Sunday seen a few cars unable to race which meant a change in format. More cars on track though for the heats on Sunday as a result of the format change, certainly provided some super Hot Rod Racing. Cameron Willacy and Ryan Morgan took the heat wins, before Mitch Souter claimed the 2021 Scottish Challenge Trophy, finishing ahead of Curtis Greer and Dan Smith.

The Stock Rods always provide great racing at HRP Lochgelly Raceway, and last weekend was no exception. Three qualifying heats preceded the European Championship race, with wins going the way of Philip Wilson, Stuart Smyth and Steve McNeice. McNeice would claim pole position for the main race, with George Baker starting on his outside, with defending champion Derek McMillan and Dean O’Dell starting on row 2. As the green flag dropped, Steve McNeice ran wide into turn 1, which Derek McMillan took advantage off, as he squeezed his car in the vacant gap left by the 65 car and quickly found himself in the lead of the race. The lead 2 cars of McMillan and McNiece opened up a gap to the cars behind as Baker put up an excellent defensive drive to hold onto his third position slot. With Baker fighting to the best of his ability, a number of drivers tried to go around the outside, most notably, Chris Lattka - with great respect shown between the drivers, it provided great racing though this also allowed others cars to latch onto the back of the battle for third. Lattka stuck to his outside line right to the checkered flag and narrowly missed out on third position by only two tenths of a second, whilst Lattka himself was also under pressure from Dean O’Dell – who finished less than one tenth of a second behind Lattka!! Derek McMillan retained his European Championship title much to the delight of his race team and supporters, with McNeice bringing his car home in second place, just a few car lengths behind. The Sunday afternoon seen the Stock Rods back in action as they raced for the Scottish Challenge Trophy, with the Scottish drivers coming away victorious in each of the three races. Gary Dean and Darren McAlpine took the heat wins, before Siobhan Martin took a convincing race win in as she claimed the Scottish Challenge Trophy! A gallant drive from Stewart Paterson – who had terrible luck on the Saturday – brought his car home in second place, defending superbly for the best part of the race, whilst Gary Dean brought his car home in third position ensuring it was a Scottish 1-2-3.

The Rebels made their annual visit to Lochgelly Raceway as they fought it out for their own European and Scottish Championships. The entertainingly bouncy robin powered cars provided some hairy moments throughout, with a number of cars tangling and bouncing around each other throughout the Saturday evening and Sunday afternoon. Shay Murphy was the dominant driver of the weekend, taking a hat-trick of race wins away with him, though missed out on the European Championship on the Saturday, but did claim the Scottish Championship on the Sunday! James Brown and Finn Robinson also took heat wins over the weekend, though it was Karl Emmett that claimed the top title on the line, as won the 2021 Rebels European Championship!

The Ministox provided two excellent days of racing at they provided super support to the headlined events. The youngsters had around 25 cars on track on both days and quickly set about each other with some excellent racing and some brave overtakes as well. Logan Tweedie took the first race win of the weekend for the youngsters, with Charlie Hardie and Bailey Millar finishing second and third respectively. Sam Cavanagh had an excellent weekend, and was arguably the driver of the weekend – taking a heat win on Saturday, and two further race wins on the Sunday as well as he really seemed to find his form. Jake Wilson took the final victory on the Saturday night, with Kyle Rogerson finishing in second place in what was his best weekend of racing in the Ministox. The Sunday seen as much action as the Saturday, as a few drivers had some falling outs which meant a few more hits and spins around the raceway. As the quicker cars battled it out amongst themselves, this often opened things up for the lower graded drivers to open up a lead in the early stages of the race – this included Kyle Rogerson taking a heat win, with Cavanagh taking a heat and final double as well. Rachel Kidd had a much improved Sunday performance having had a run of bad luck on the Saturday – Kidd took away a 2nd in heat 2, and a 3rd in the final on the Sunday for her efforts.

The 1300 Stock Cars joined in on the action the Sunday, and with 33 cars on track, it was always going to be lively!! Heat one seen a couple of race stoppages with stricken cars on the raceway requiring moving. Andrew Mathieson crossed the line first, but was deemed to have jumped a start which handed the win to brother Euan, with Blair Robertson also promoted upto third position. Heat 2 of the night seen a fair few hits going in, most notably with Jacob Roff pushing Andew Mathieson hard into the wall on turns 3 and 4 which seen both cars retire from the race shortly afterwards. Patrick Calderwood took a convincing heat 2 win, finishing ahead of the returning Callum Barclay. The meeting final seen the Mathieson car make it back onto track with the crowd eager to see what would come following the heat 2 clash with Roff. Roff got away first, though Mathieson did well to reel him in and took his first opportunity at making contact with the Jacob Roff car! Roff, amongst a few other cars in a battle on track, felt the force of the Mathieson bumper but was able to ride it out with a few other cars between him and the wall, before Mathieson was spun out of the race a lap or so later. Jamie Stewart, William Stawiarski and Euan Mathieson claimed the top 3 places in the meeting final after a super battle further down the pack with cars jostling consistently for positions on track!!

We would like to thank our Sponsors, Lee Smart Racing, and ATP Spray Finishing for the support over the epic weekend.

We are back in action this Saturday night with the Ninja Karts European Championship on offer, sponsored by McAlpine Auto Sills. The ProStocks also race for their Scottish Championship, whilst the CC Rods, Superstox and Classic Hot Rods are all also in action. Tickets can be pre-booked online via our website, hardieracepromotions.co.uk.