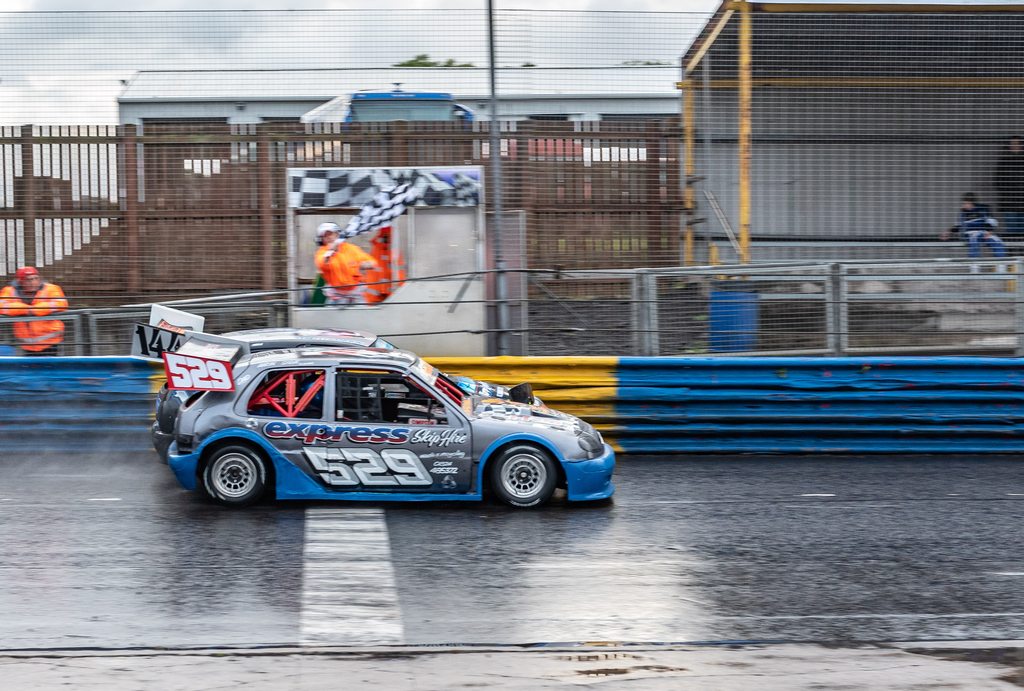 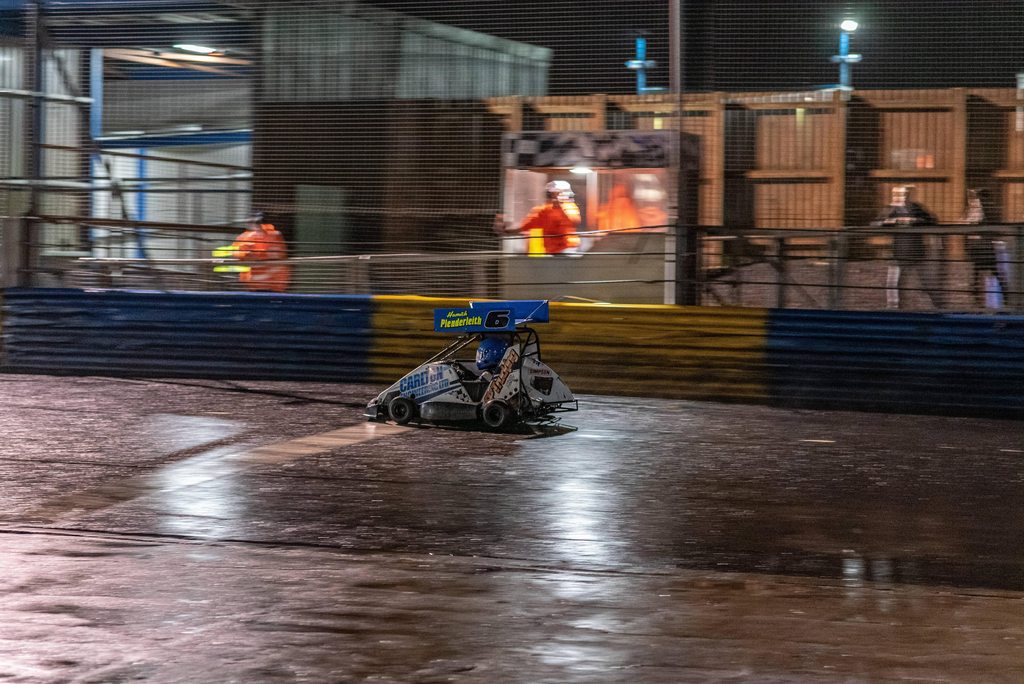 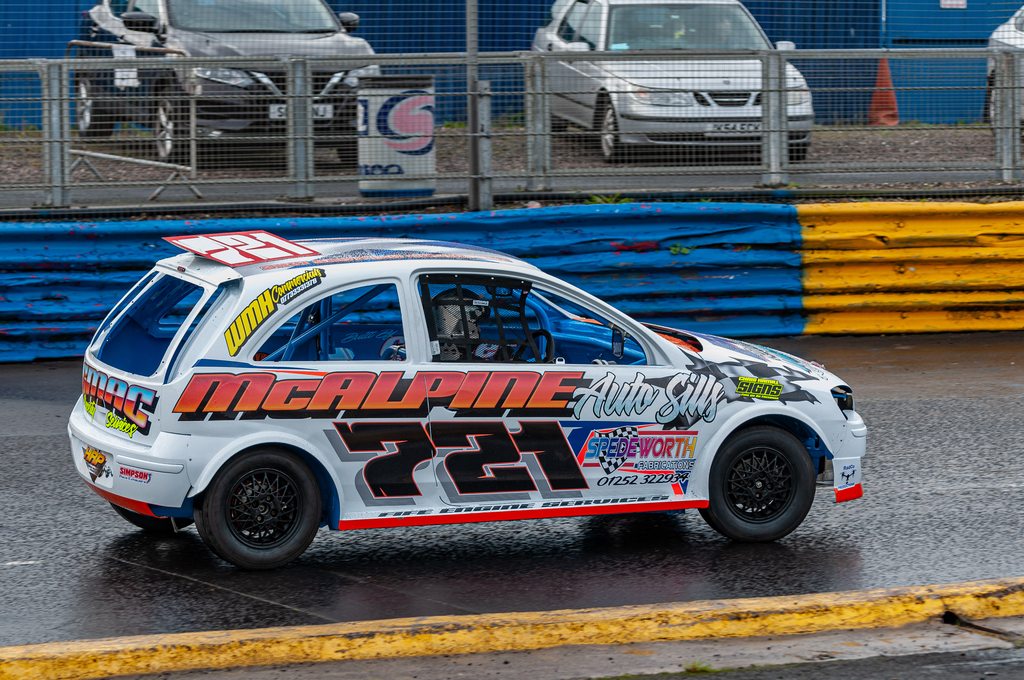 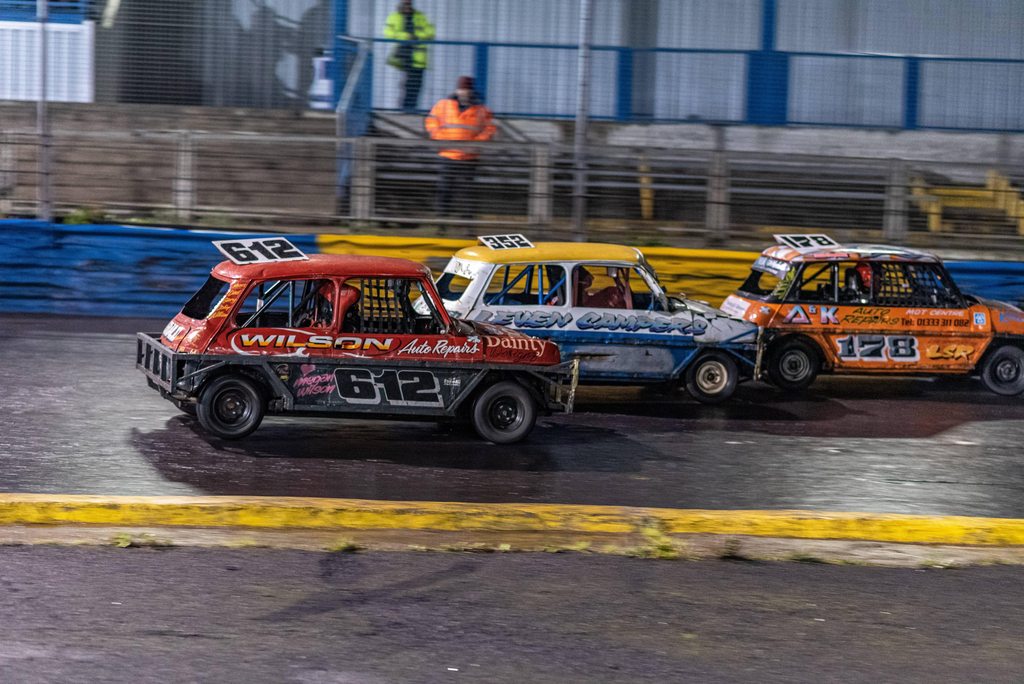 It was a cold and miserable night at Lochgelly Raceway on Saturday evening, but there was a lot of hotly contested races throughout the evening, with the youngsters stealing the show.

The Ninja Karts provided some truly excellent racing throughout the evening, despite the conditions – the youngsters – under the age of 11 certainly showed how capable they are, regardless of the on track conditions. The evening would kick off with a whites and yellows race for the less experienced of drivers, which seen Lucas Whyte take his first win in the formula, coming through from the yellow grade and overcoming Thomas Melrose in the closing laps, with the birthday boy, Layton Cairns taking away a well deserved third place finish. The first of the main races for the Ninja Karts would see the ever improving Jack Connor take a win – holding on superbly from a charging Hamish Plenderleith for the best part of the last few laps. Aiden Duffy drove his heart out as he battled his way to an excellent third place finish. Heat 2 of the night seen the grid reverse with those that started at the back of heat 1, now starting up front. A couple of yellow flag stoppages in the race would see the field bunched up – with one incident causing some parents to run the length of the track, as Jaxon Joyce and Aiden Duffy had a bit of a head on collision. Thankfully, both drivers climbed out the karts without too much issue. Eevie Ford continued her excellent run of form, as she raced to another race win – with Plenderleith again finishing 2nd, and reigning champion Kenzie Kopacz completing the top three. The stars of 2021 lined up for one of the biggest races of the season for the youngsters, with the high flying drivers dominating the first few rows of the grid; Plenderleith, Ford, Kopacz, Bell, and Connor all featuring within the first few rows! As the green flag dropped, it was Plenderleith who got away first ahead of Jack Connor and Kenzie Bell, with Kenzie Kopacz just behind. A fantastic battled ensued amongst the drivers, as the dualled for position, and tried to carefully, and as quickly as possible, navigate their way through the back markers. Plenderleith would find his lead closed down, with Eevie Ford challenging in the latter part of the race. It was a joy to watch them dual, dicing in and out of the traffic as they tried to outsmart each other on track – The lead car, Plenderleith often benefited from the traffic, but not always as the gap opened up, and closed down throughout the remaining laps. Kenzie Bell, Jack Connor and Kenzie Kopacz battled further behind for the third podium place. Plenderleith held onto take a deserved Scottish Championship win in what is his final few meetings in the formula before graduating up the classes, whilst Eevie Ford can be proud of 2nd place, and Kenzie Bell likewise of his 3rd place finish! The youngsters really were the stars of the night, and are most definitely the stars of the future!

The 2.0 Hot Rods battled it out for their own Scottish Championship, defended by Ryan Mackie. Alike the Ninja Karts, 2 reverse grid heats would be used to determine the grid for the Scottish Championship race. From the outset, it looked like it would be one of four drivers that would come out on top in the main race, with Jason Secker and Cameron Willacy both sharing the wins, and in fact top two places in each of the qualifying heats, with Jock Campbell and Kevin Stewart finishing in 3rd and 4th respectively in the heats as well. As the grid was formed for the main race, it was Secker and Willacy that would occupy the front row. Secker faced a challenge from Willacy in the opening lap, but Willacy soon found himself behind the Jock Campbell car. Secker meanwhile, rode off into the distance as he would go onto become the 2021 Scottish Champion in his first season in the formula. Jock Campbell meanwhile, made his car as wide as legally possible, in his defence of Cameron Willacy, with WIllacy trying the outside line on a number of occasions, but to no avail – though both cars did cross the line within a cars length of each other as they took the flag.

The Ministox featured with 24 cars taking to the track, in what was another excellent turn out for the youngsters. Heat 1 of the night went the way of the recently returned Rachel Kidd, who was also out in a new car. Rachel dominated the race and once out in front, never looked back as she left the others in her shadow. Jay Paterson would continue to show good form at Lochgelly Raceway, as he took yet another race win in the 2nd heat of the evening. Koddi Wright had a strong performance in the formula, as he took away a runner up spot in each of the 2 heats, whilst Rhys Kelly and Scott Allardyce rounded off the top 3 in the 2 heat races. The meeting final seen the youngsters entertain again, with no shortage of action and a yellow flag suspension as well, as Max Walker found himself stricken across the raceway. ORCi Champion Scott Allardyce would inherit the race win, following the docking of Lewis Burgoyne. Jay Paterson would take 2nd place, whilst Rian Mitchell completed the top 3.

The Stock Rods were back out in action for the first time since the World Championship in mid September. Darren McAlpine debutised his new car, and was straight into the swing of things as he took a heat and final double win. The recently crowned Scottish Champion will have been delighted with how it went on its first outing. John Bremner is a driver that looks to be showing great promise in the formula, and took away his first win, sweeping to a win in the 2nd heat of the night. Brett Sneddon looked to show some good speed again, and rounded off his evening with an excellent 2nd place in the final, finishing ahead of Ian Donaldson and Gary Dean.

The ProStocks were the final formula in action, and with a disappointing turn out of cars, it was left to Darren Rae to sweep to a hat-trick of race wins. Becki Ritchie did her utmost to entertain though, as she sent her car spinning on several occasions throughout the night – perhaps looking to get involved in drifting as well?

We are back this Saturday and Sunday, with a 2 day special!! Almost 70 bangers are expected to be with us, as the Micro Bangers contest the 2021 Micro Banger WORLD CUP!!! Racing starts at 4pm on Saturday!