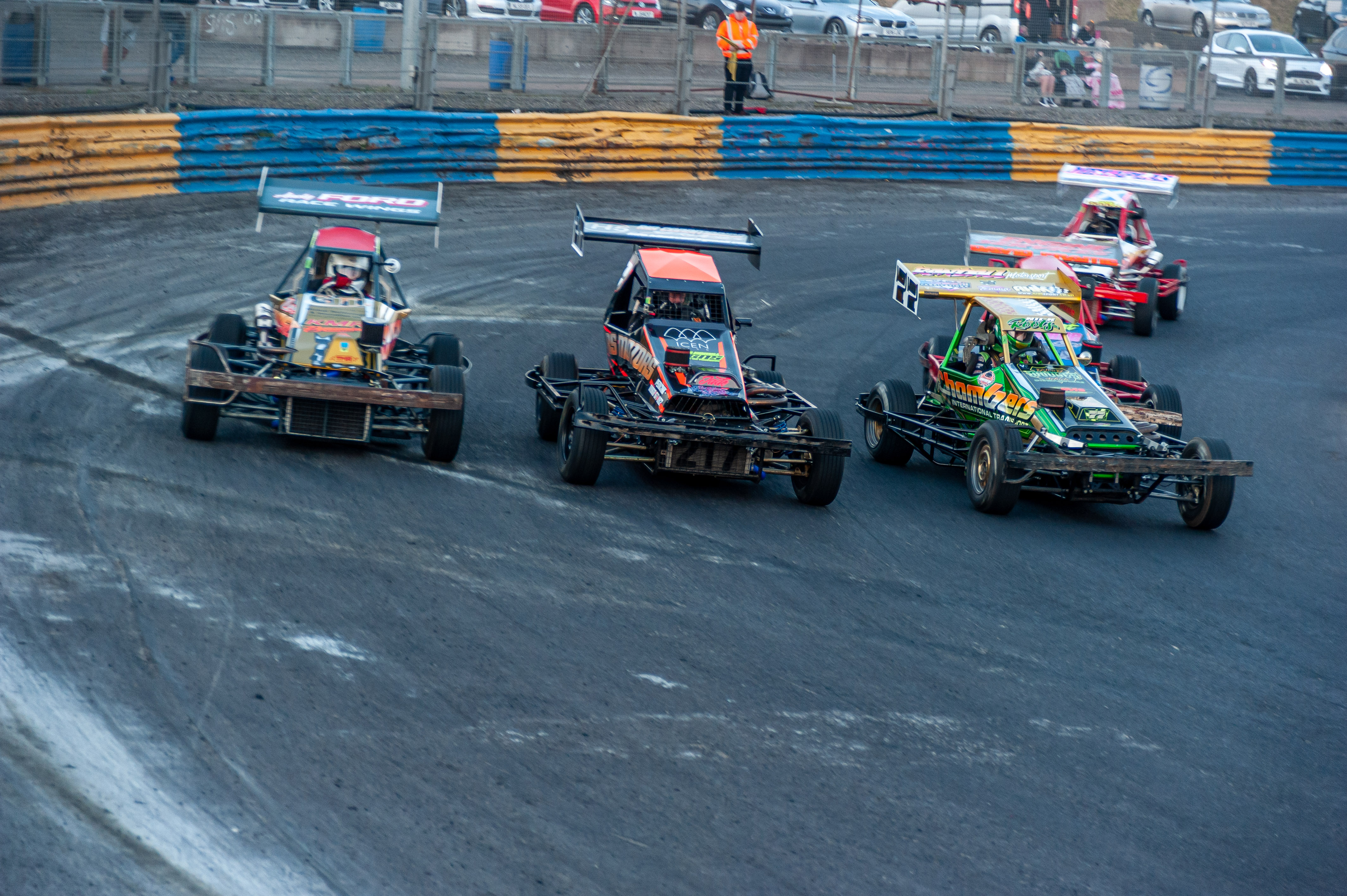 Saturday 26th March seen the final weekend of the first month of the season, with another superb night of racing provided.

The Junior Productions seen Keira Wotherspoon and Abe Adams Jnr make their debut’s in the class, whilst Lewis Duffy, Aiden McKinnon and Brooke McMullan continued to find their confidence in the class since starting out earlier this season. It was a great night for the lower graded drivers, with William Plenderleith and Callahan Bremner both taking their first wins in the class, with Connie Anderson coming away with an excellent hat-trick of runner up spots. Plenderleith took the first race of the night, having held off Connie Anderson for the best part of the race, with Anderson pressurizing strongly in the latter part. Bremner took the second heat of the night, with Anderson again finishing in a close second place, though she herself had Koddi Wright closing in on her in the closing stages of the race. The meeting final seen Koddi Wright and Jack MacLeod come good from the back of the grid, but both were adjudged to have gone too quickly at the beginning of the race, and both got docked a couple of places as a result. These demotions seen Scottish Champion Jase Walle take his first win of the season, with Anderson also promoted up into second place, with Wright and MacLeod down to 3rd and 4th respectively. It was a great night all round for the youngsters, with just under 20 cars on track, and some super close and exciting racing as a result.

The Stock Rods found themselves with another good turnout of cars, with Jamie Doyle making it back out after his car was destroyed a couple of weeks ago, albeit in another car. Alex McDonald turned out a nicely signed car, though found the going tough having opted to start from the rear of the grid. David Crichton continued his impressive start to 2022, and took a race win in the opening race of the night for his efforts, whilst early season pace setter Gary Dean brought his car home in 2nd place. Niall McFerran continues to impress from blue grade, as he took away another good haul of points, including 2 runner up spots and a third place in the opening heat. Chris Lattka brought his car out all stickered and looking the part, and he came away with some strong results for his efforts. There would be no change of luck for World Champion Siobhan Martin though, as she twice got caught out by back markers – in the opening race of the night she found herself swerving to avoid a car that had oversteered out of turn 4, resulting in her dropping back the order and having to battle her way back through. Again, in the meeting final whilst making progress and challenging the Stewart Paterson car, a back marker once again over committed and almost took both the 46 and 25 cars out of the race. In a plus for Siobhan, she looked to have found good speed throughout each of the three races, and with a change of fortune, will be back on victory lane soon! Jamie Stewart took a race win in the second heat of the night, whilst Gary Dean took the meeting final.

The Superstox seen the largest grid of the season to date, with several drivers missing from attendance due to various reasons – The formula is certainly looking great for the rest of the season if these numbers keep up! Dean Johnston was in brilliant form on Saturday, making up from his issues at the previous outing. Dean swept to a heat and final double, with visiting Bradley Brooker also taking a race win. World Champion Nick Roots made the trip north as he looks to show off the Gold Roof while he has it, and came away with three top 3 finishes, but wasn’t able to keep tabs with the flying Johnston. David Frame and Gary Chisolm both had a good set of result, with Chisolm getting quicker as the meeting went on. Declan Salmon also made the trip north, though didn’t come away with any great results. There were season debut’s for Steven Ballentine, Mick Taylor and Jack Turbitt.

The Ministox yet again provided some great racing, with just under 25 cars taking to the track. Demi Ritchie had an excellent meeting, in what was her final ‘home’ meeting racing from yellow grade, before moving upto blue at the start of the month. Demi was in the mix in each of the three races, and was cast aside by the oncoming Jake Wilson in the opening heat, which dropped her down the field, whilst Jake would go on to take the heat win, with Robbie Armit and Charlie Hardie taking the top three. Heat 2 would see Demi make amends, as she held off to take the win, whilst Armit, Wilson and Hardie all battled it out for 2nd place, just behind Ritchie. The meeting final would see Robbie Armit take a deserved race win, having been in the mix throughout the night. Ritchie and Wilson would complete the top three in what was an exciting night of racing for the youngsters.

The CC Rods were the final formula in action, a late call up for the absent Banger Drivers. Although, short on numbers, the CC Rod drivers may have forgotten that they were actually CC Rods, and not pretending to be bangers!! Heat 1 was a good race from the formula, with Mirran Adams making a solid debut from the back of the grid, whilst Connor Mason took the race win. Heat 2 of the night, seen things go pear shaped towards the end of the race – as Lee Scott challenged for the race win, the lead pack closed up behind Natalie Mason. Scott would go to the outside, and looked to have claimed the ground to take the victory, though, Callum Elliot would run into Natalie Mason, with Raymond Brown also hitting Callum Elliot – resulting in Lee Scott and Connor Mason heading towards the wall going into the final corner – Kyle Hutchison would eventually be awarded the win in what was a crazy last lap!! The meeting final went the way of Raymond Brown – who continues his excellent start to the season with yet another race victory.

We are back this Saturday and Sunday – as we host the 2022 DPC National Hot Rod European Championship – an event not to be missed!