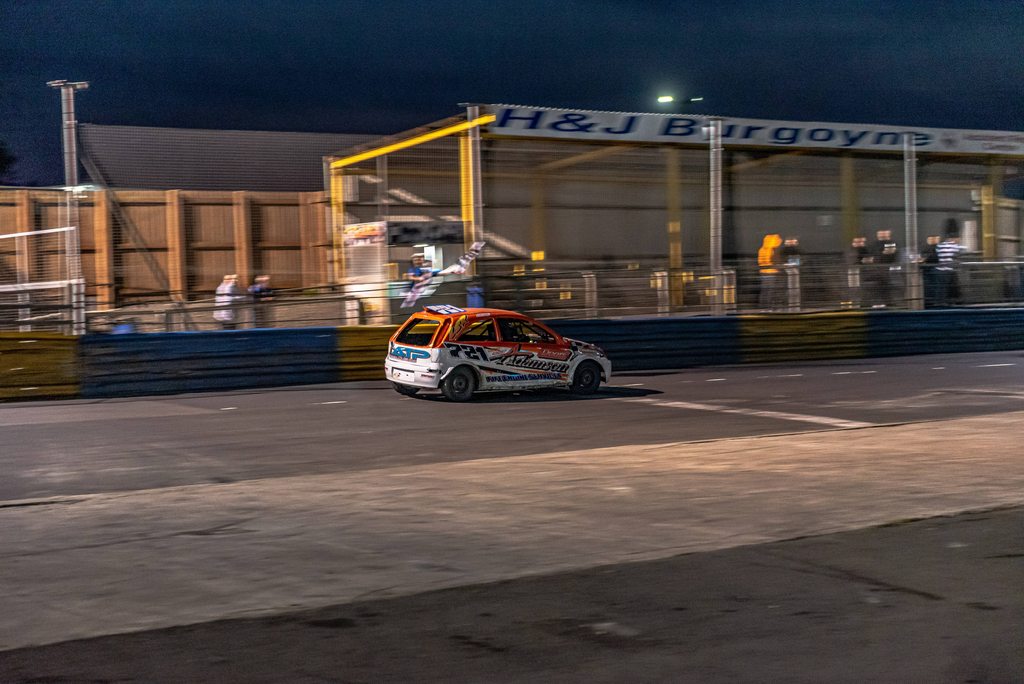 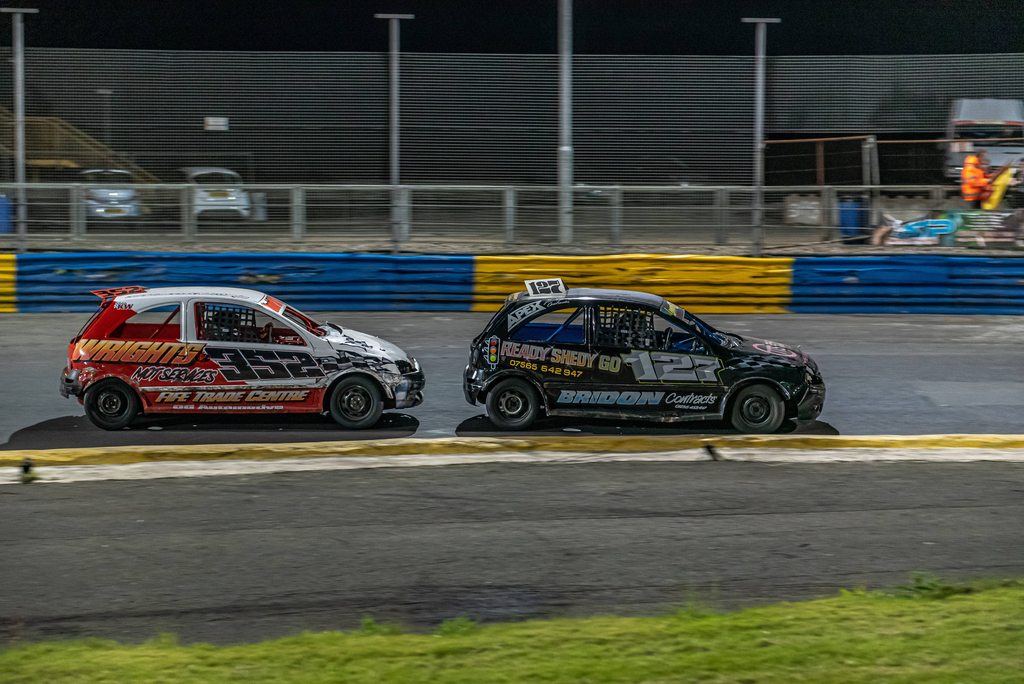 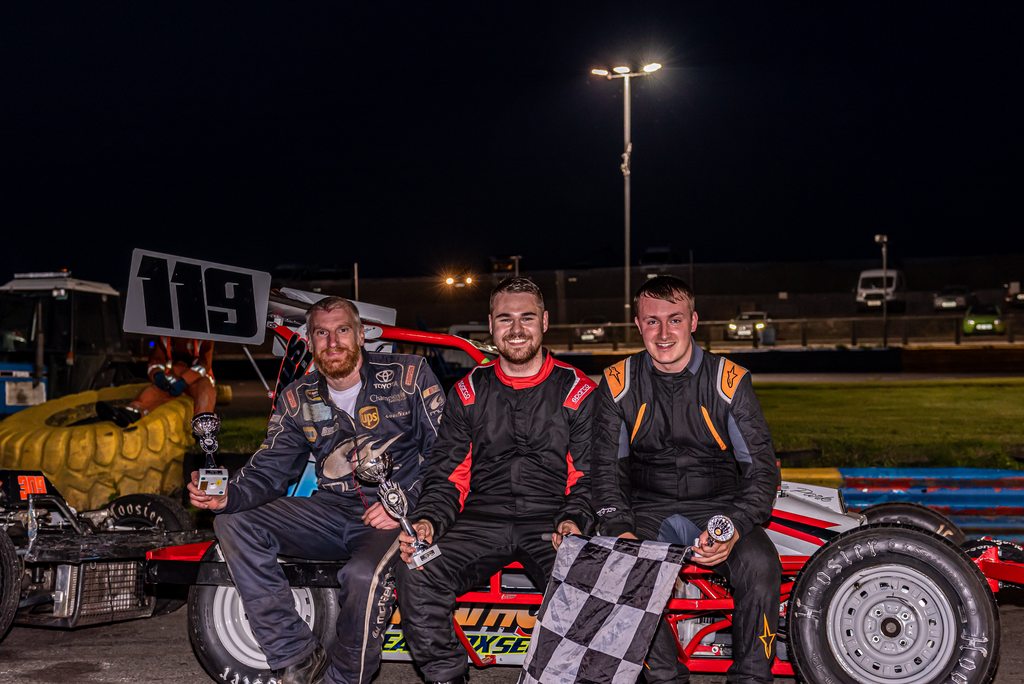 The Stock Rods contested their 2021 Scottish Championship at Lochgelly Raceway on Saturday 28th August. The format would see a grid drawn from the hat to determine the first of the 2 qualifying heats for the Scottish Championship, with the second heat reversed to give all drivers an equal opportunity to secure their position for the Scottish Championship race. Siobhan Martin secured a front row start for the opening heat, and quickly found herself clear of the field as the others battled it out behind. Martin would go on to take a comfortable heat win, with Darren McAlpine finishing in 2nd, whilst reigning champion, Chris Lattka brought his car home in 3rd position. Heat 2 of the night seen Gary Dean start up front having started from the rear in the opening heat, and made the most of his starting berth, as he took a race win finishing ahead of Jim Pitcaithly in the 91 car. McAlpine took away another top three position that would see him start the Scottish Championship race on pole position. Alongside Darren on the front row would be National Points Champion Siobhan Martin, with Gary Dean and Chris Lattka just behind. 1 rolling lap would commence before the green flag dropped for the beginning of the 2021 Scottish Championship. Both front row cars got an excellent get away with McAlpine and Martin battling it out side by side for the first few laps. Gary Dean and Chris Lattka were hot on their heels though, and Gary Dean managed to stick onto the back of Darren McAlpine whilst Siobhan was on his outside. Siobhan was unable to make it stick on the outside and soon found herself behind Gary Dean and Chris Lattka early in the race. Gary Dean and Darren McAlpine would stretch their legs as they opened up a gap at the front to the pack behind led by Chris Lattka, who was having an excellent battle with Siobhan Martin for 3rd position. David Crichton was not too far behind neither as he found some good pace on the night. Lattka and Martin swapped positions a couple of times through the race, whilst Jim Pitcaithly made great progress from near the back of the field. Come the end of the race, Pitcaithly was up and challenging Lattka and Martin for third position, though couldn’t quite get through either of them despite his best efforts. McAlpine took the win, taking his first Stock Rod Scottish Championship, with Gary Dean in 2nd, and Chris Lattka in 3rd.

Their were two junior formula in action on Saturday, with the UKMC sponsored Ninja Karts seeing just over 20 karts in action, with the Junior Productions also featuring as the youngsters got some invaluable track time.

The Ninja Karts provided some great racing, with 4 different winners from each of the 4 races. Saul Galloway continues to go from strength to strength, as he took an excellent race win in the whites and yellow race, with Caelan Grant starting off an excellent meeting, taking a 2nd place finish, whilst Connor Anderson brought his kart home in 3rd place. The first heat of the night seen Eevie Ford prove to be the quickest of them all, as she raced excellently from the red grade as she held off Hamish Plenderleith and Kenzie Bell to take a fantastic race win, only narrowly crossing the line ahead of the hard charging Plenderleith kart. Hamish Plenderleith would go one better in the next race though, as he battled his way through the pack from to overcome early pace setters Caelan Grant and Jack Connor – as the lead duo were caught out with back markers whilst Plenderleith used his experience to pick the line that would see him overcome each of them. Grant and Connor both held on for an excellent 2nd and 3rd place finish though. The final race of the night seen the same top 3 drivers cross the line, but in a different order. Caelan Grant held on superbly from Plenderleith in the closing laps to take a fine race win – despite persistent pressure from the #6 driver. Jack Connor completed the top three, with Kenzie Bell just missing out. There were some great performances further back in the Ninja Karts, with Shevill Jnr picking up another set of good results, whilst Aiden Duffy also scored consistently yet again.

The Junior Productions were with us for only the 2nd time this month, and provided some great racing with the youngsters continuously improving meeting after meeting. The first race of the night would see James Slater cross the line in 1st place, but was unfortunately deemed to have been found to have had a couple of bumps throughout the race which would see him removed from the result – however, you cannot discredit the performance from the 687 car, as he drove as well as he has done in the formula. Further back the field, a coming together with Jack Baird and Jack MacLeod after the Baird car drifted over infront of the MacLeod car on the outside, a coming together that would see the Baird car spin around and have a heavy clatter with the wall – thankfully Jack was alright, though the car not so much! Jack MacLeod would go onto take the win in the race, with Dylan Smart having an excellent race, taking 2nd place, with Jase Walle also promoted upto third place. Lennon Grant failed to finish the first race, but certainly made amends in the following two races – taking a heat and final double that will see him automatically promoted up to the next grade. Koddi Wright and Dylan Smart completed the top 3 in each of the further two races behind Grant. There were some good performances from some of the novices on track, with Connie Anderson and Olivia Ktzyanowska standing out as having their best meetings to date since coming into the formula.

The Superstox had a disappointing amount of cars on track, with a few absentees for various reasons, but the drivers that were in attendance put on a decent showing. Bryan Forrest and Dean Johnston continued to trade blows, though Johnston seemed plagued by an issue that seen his car come to a halt on a couple of occasions throughout the night, but did manage a heat win in the second heat of the night, with Forrest taking a win in the opening heat of the night with Johnston failing to finish. Aaron Riddell is a driver certainly on an upward spiral since returning to action in his new car. A few fastest laps and a smooth style seen Riddell take an excellent final win, overcoming Forrest in the closing laps, with Jack Turbitt completing the top three in the meeting final.

The CC Rods were the final formula in action, and provided some of their best racing of the season. The non-contact class behaved well on the most part, with many drivers battling it out side by side through each of the three races on the night, though a couple would fall foul of the steward and were docked a couple of places for their ‘efforts’. Dylan O’Donnell has been in sensational form since returning to action, and seen two race wins taken away from him, but still managed to go away with three top three finishes for his nights racing. Callum Elliot would be a benefactor in one of the races, as he was promoted up into first place as he took the first of his two race wins on the night, which will see him upgraded for the next meeting as well. Shane Allen made a return to racing, and took the final win, with Elliot second and the demoted O’Donnell down into third.

We are back this weekend with TWO action packed days of racing, featuring the Lee Smart Racing 1300 Stock Car World Championship, the Superstox British Championship and the Oval Track Legends European Championship!!!