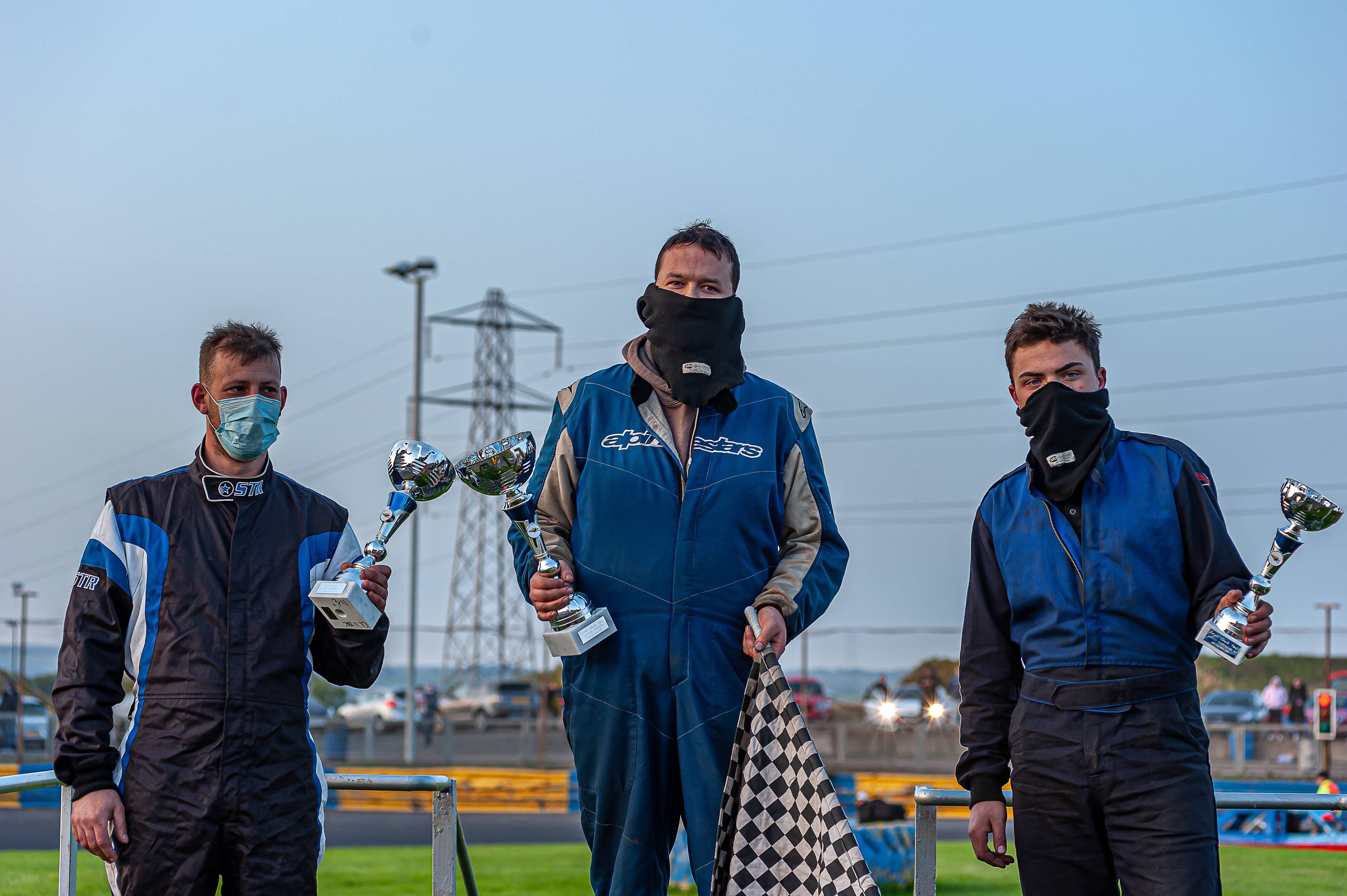 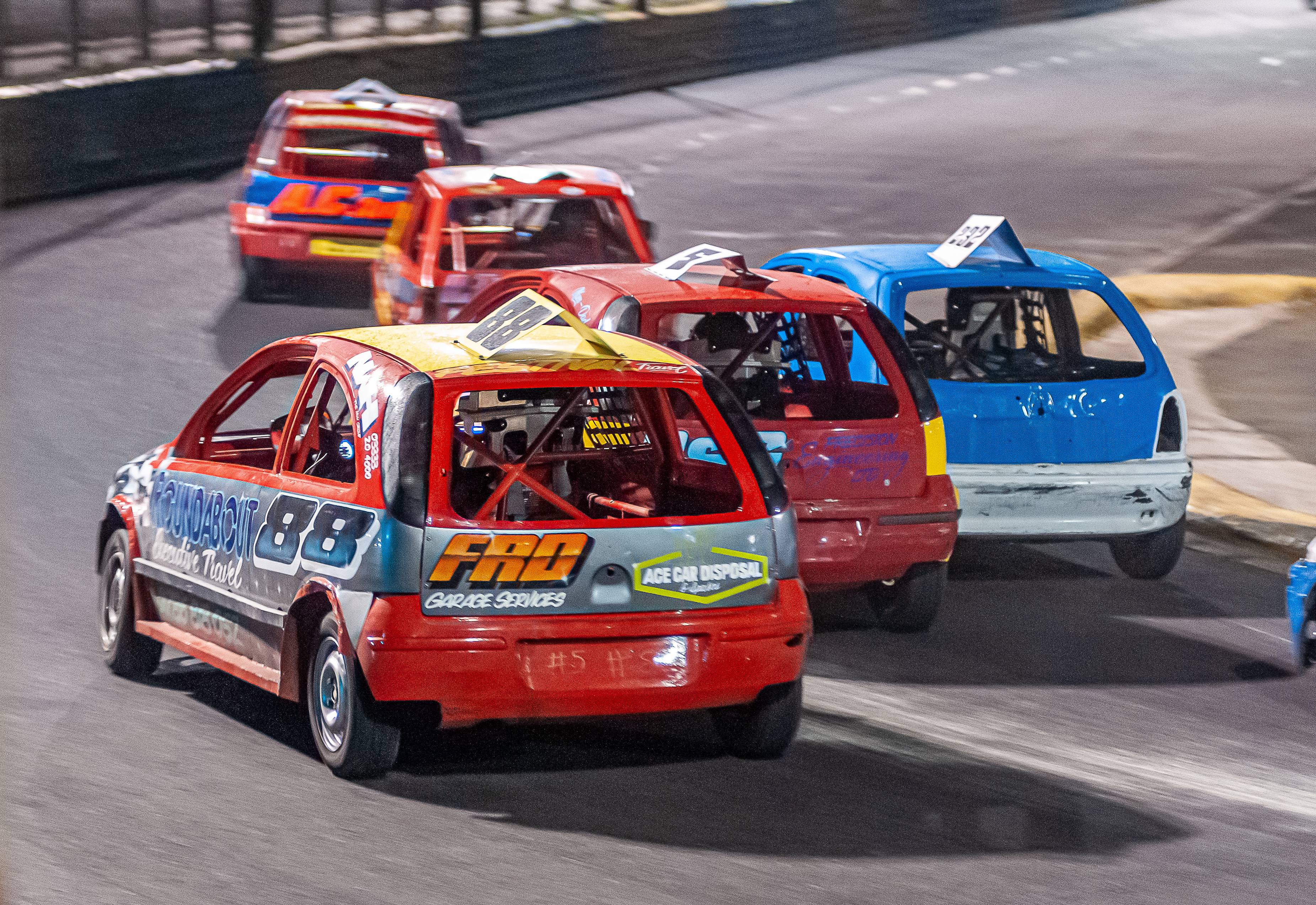 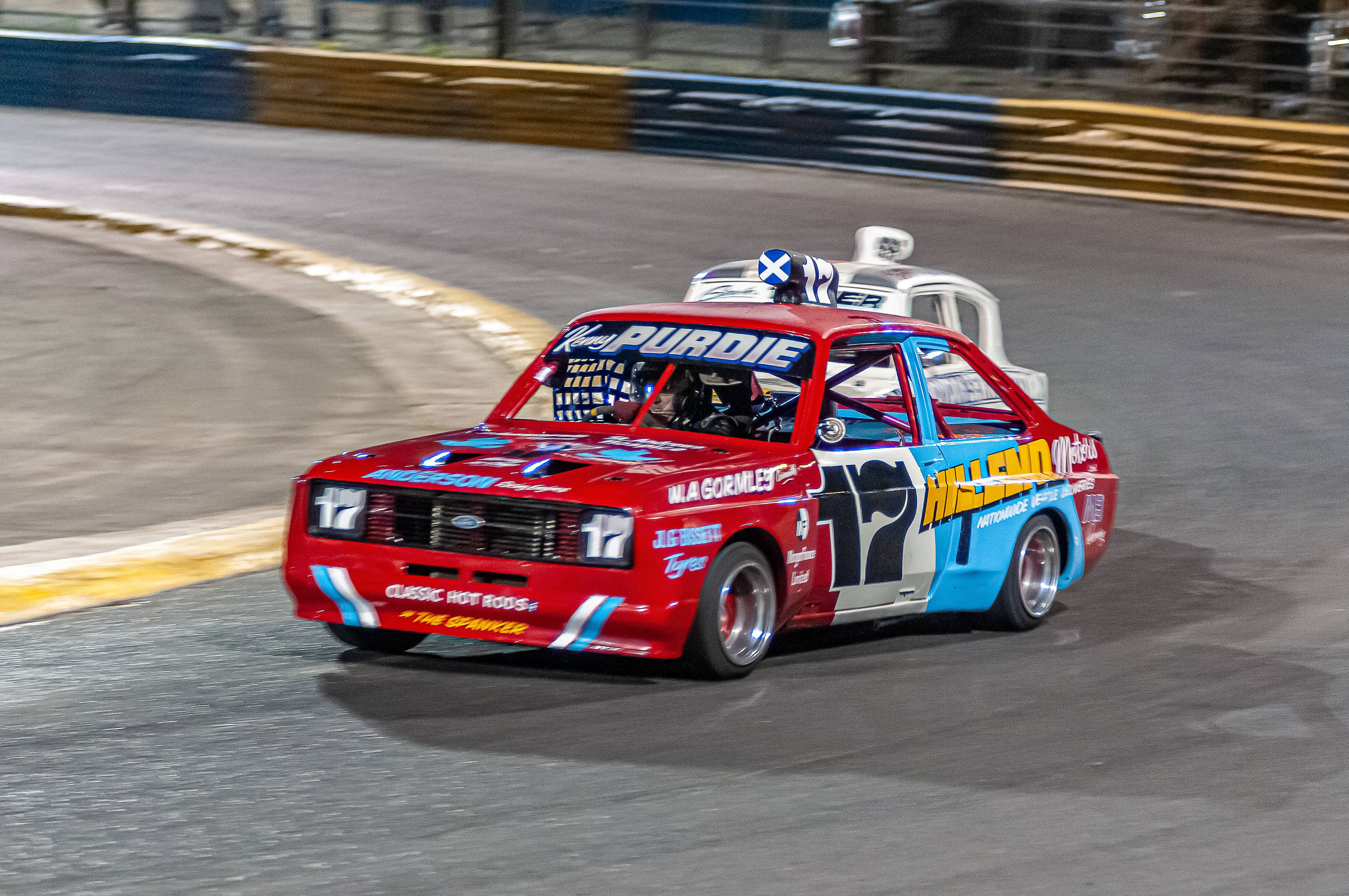 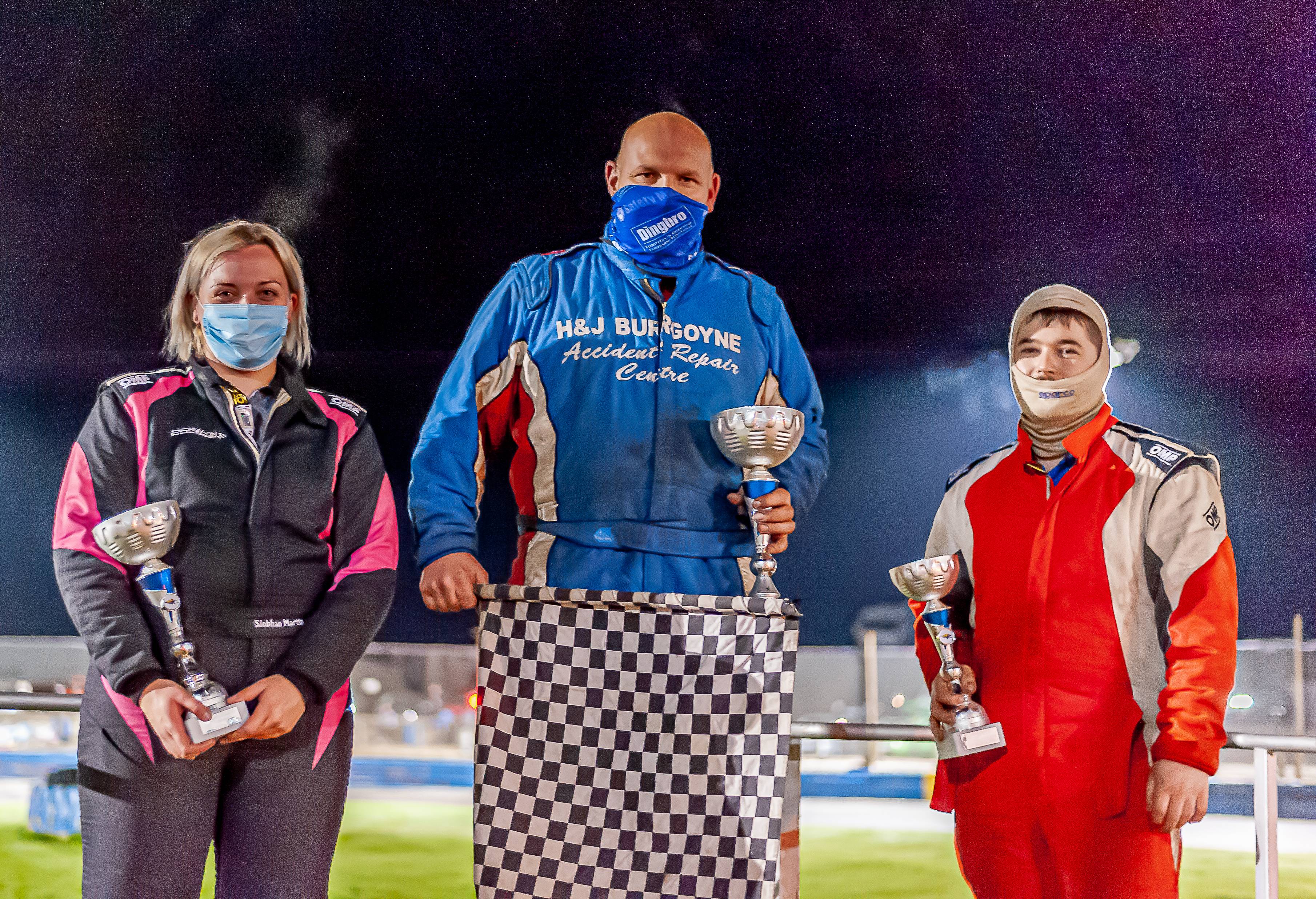 The feisty 1300 Stock Cars seen there first race off the night being their title event – the grid was formed by a random draw which seen a tasty looking grid, with some of the favourites near the front, and some of the favourites a bit further back! Danny Whyte started the race on pole position and got away well enough to lead at the end of the first lap, however, a melee on the home straight seen the yellow flags called for at the end of the 1st lap with a complete restart required, with the cars lining up again. The green flag dropped and again Whyte got away well, with Fraser Clark and Graham Osbourne just behind – a few laps were completed before another incident on track seen the yellow flags brought out again, this time though, a single file restart was called for in race order. Whyte led away at the restart, with Clark in behind, followed by Osbourne and Dougie Ford. As the green flag dropped, Naismith was quick off the mark and up into 3rd position, with Clark and Naismith soon overcoming Danny Whyte. Whyte dropped back from the lead two, and had a good battle with Dougie Ford, before Ford moved clear into 3rd position. Up front, Naismith was hot on the heels of Fraser Clark, waiting for a mistake, or waiting for the perfect moment to make his move, with a bit of breathing space behind the lead two. As the laps drew in, the anticipation was felt around the venue as everyone awaited the last lap show down! Naismith went in fairly, but hard enough to push Clark wide on the last lap to cross the line just ahead of Clark, with Ford 3rd and Whyte 4th. However, Naismith was deemed to have jumped the restart and was docked 2 places for the infringement, giving the Scottish title to Fraser Clark. A disappointed Sean Naismith went out in the next heat and won the race in a convincing manner ahead of Graham Osbourne and Andrew Mathieson. The final race of the night for the 1300 Stock Cars, was arguably the best of the night, with a superb finish to the race. A yellow flag stoppage with Martin McCafferty against the wall, seen early pace setter Kyle Hegg have his lead wiped out and soon found Fraser Clark and Sean Naismith on his bumper. The trio of front runners had an epic 3 or 4 laps as they traded blows, hits and dummying as the duelled for the win! Fraser Clark crossed the line first, with Kyle Hegg given 2nd by the narrowest of margins ahead of Sean Naismith with all three cars crossing the line within a cars length. The 1300 Stock Cars are back in action this Saturday night!

The Stock Rods were also racing for their Scottish Championship title. Gary Dean looked to defend the title and drew pole position for the opening heat. Gary got away cleanly enough and led the opening laps of the first heat, before being reeled in by Chris Lattka. Lattka opened up a bit of a gap, but Dean again reeled him back in and took the fight to Lattka, though could find no way around. National Points Champion Siobhan Martin finished just behind the front 2, with Gary Nicholls in 4th. The 2nd heat of the night seen a reverse grid from the opening heat, meaning Gary Dean was at the back of the grid for this race. Brett Sneddon kept his nerve as he led most of the race, taking the win ahead of Stewart Paterson and Siobhan Martin. The Scottish Championship race seen Chris Lattka and Siobhan Martin qualify on the front row. As the green flag dropped, the 658 car exited turn 1 sideways after being clipped from behind forcing Martin to back off. Gary Dean looked for a gap up the inside of Lattka as they crossed the start finish line, with the 2 cars touching and both losing control somewhat, with Gary Dean bouncing across the rumble strips putting an end to his defence. Lattka somehow held onto the lead, with Paterson and Martin just behind going into turn 1. Martin and Paterson made slight contact, with Siobhan coming out of turn 2 in 2nd place and on the back bumper of Chris Lattka. Stewart Paterson lost out to Gary Nicholls in the process, with the front 2 going onto have an excellent battle for the lead, whilst Nicholls, Paterson, McGill and McAlpine all battle for the 3rd position place. Up front, Siobhan pushed Lattka around the raceway, with Lattka showing her the outside line. Siobhan tried her utmost to find a way around the experienced Lattka on the outside, but could not force herself in front. As the 2 battled it out side by side, it allowed Nicholls and Paterson to close up behind, with Siobhan deciding to tuck in behind Lattka and ensure that 2nd place isn’t lost to the closing pack behind. Lattka took the title, with Martin and Nicholls completing the top three.

The Junior Productions were in action with an excellent 20 cars in attendance, including 3 from Northern Ireland. The Northern Irish contingent almost went away with a hat trick of race wins however, race 2 seen Jack Morrow docked a couple of places for contact. Jack Morrow 924, took the race win in the 1st race, with fellow Northern Irish driver Chelsey Rainey finishing behind, though she was docked for contact, bringing John Bremner upto 2nd and Harvey Sneddon in 3rd. Heat 2 of the night seen Morrow again cross the line first, but was docked for contact, with Sneddon being elevated to 1st and Kyle Rogerson into 2nd. The meeting final seen Chelsey Rainey continue her impressive meeting, taking an excellent race win, with Sneddon 2nd and Matthew Weir coming home in 3rd, in what was an eventful occasion for the Junior Productions!!

The ProStocks lacked some numbers on Saturday, with a few drivers missing for variety of reason, however, the drivers on track did there utmost to put on a show, with Paul Winfield taking a superb hat-trick of wins that will see him pushed up the grades, whilst Ross Stewart also took a hat-trick of 2nd places!!

The Classic Hot Rods were in action for the first time in 2020 in Scotland, though unfortunately see some cars leave with damage. A coming together at the end of the 1st heat seen Gavin Taber and Martin Balfour cross the line in a mess, with Balfour losing his wheel as a result of the collision. Kenny Purdie took the opening race win, with Daniel Buckley finishing 2nd and the returning Graeme Callendar in 3rd. The 2nd heat of the night seen Buckley take the win ahead of Purdie and Callendar, before a 2 car showdown seen an entertaining battle between Kenny Purdie and Gavin Taber in the meeting final, with Purdie losing out to Taber on the last lap.

The Back2 Basics Bangers race for their Scottish Championship this Saturday night with bookings able to be made through our website, hardieracepromotions.co.uk 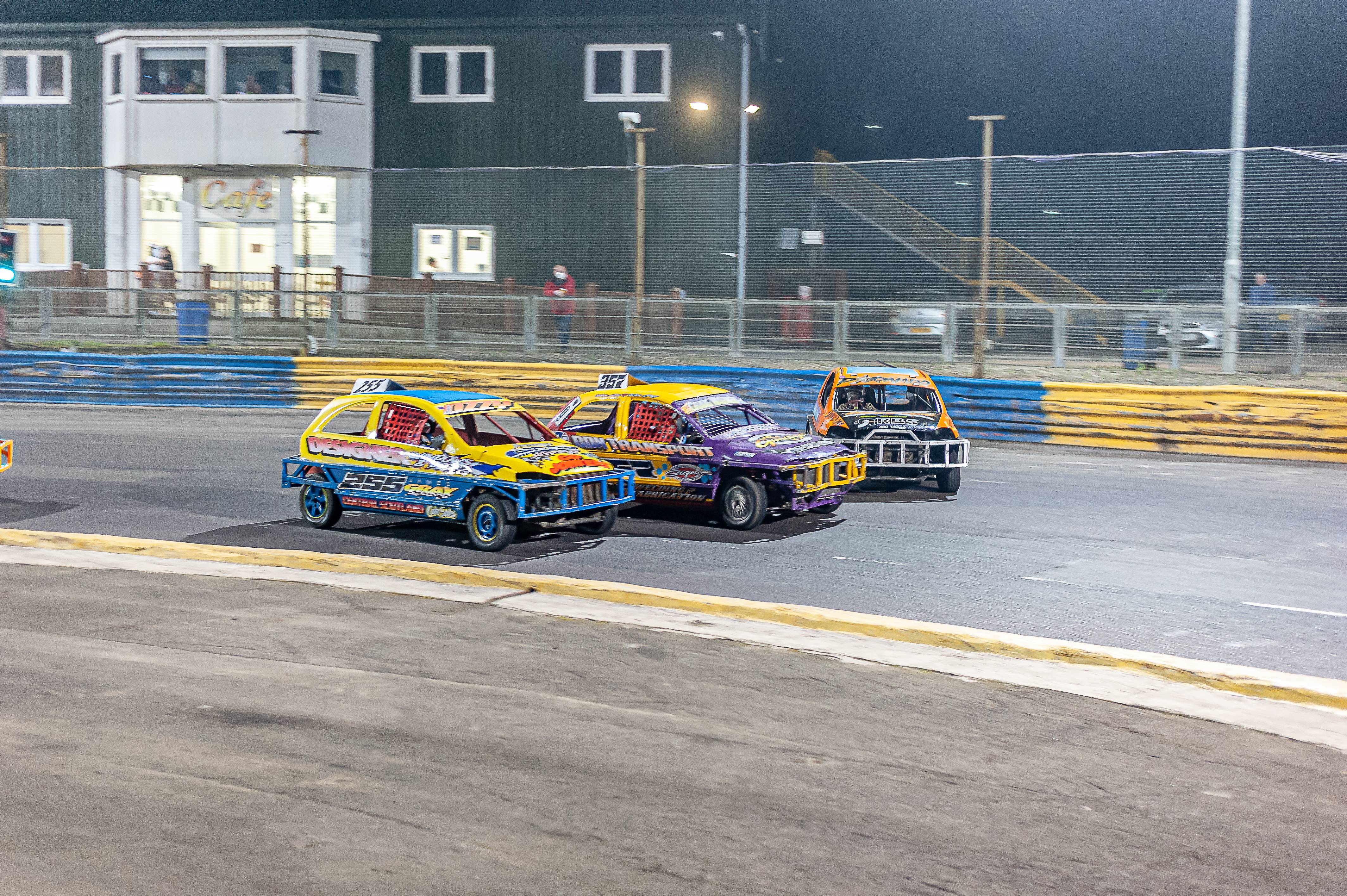