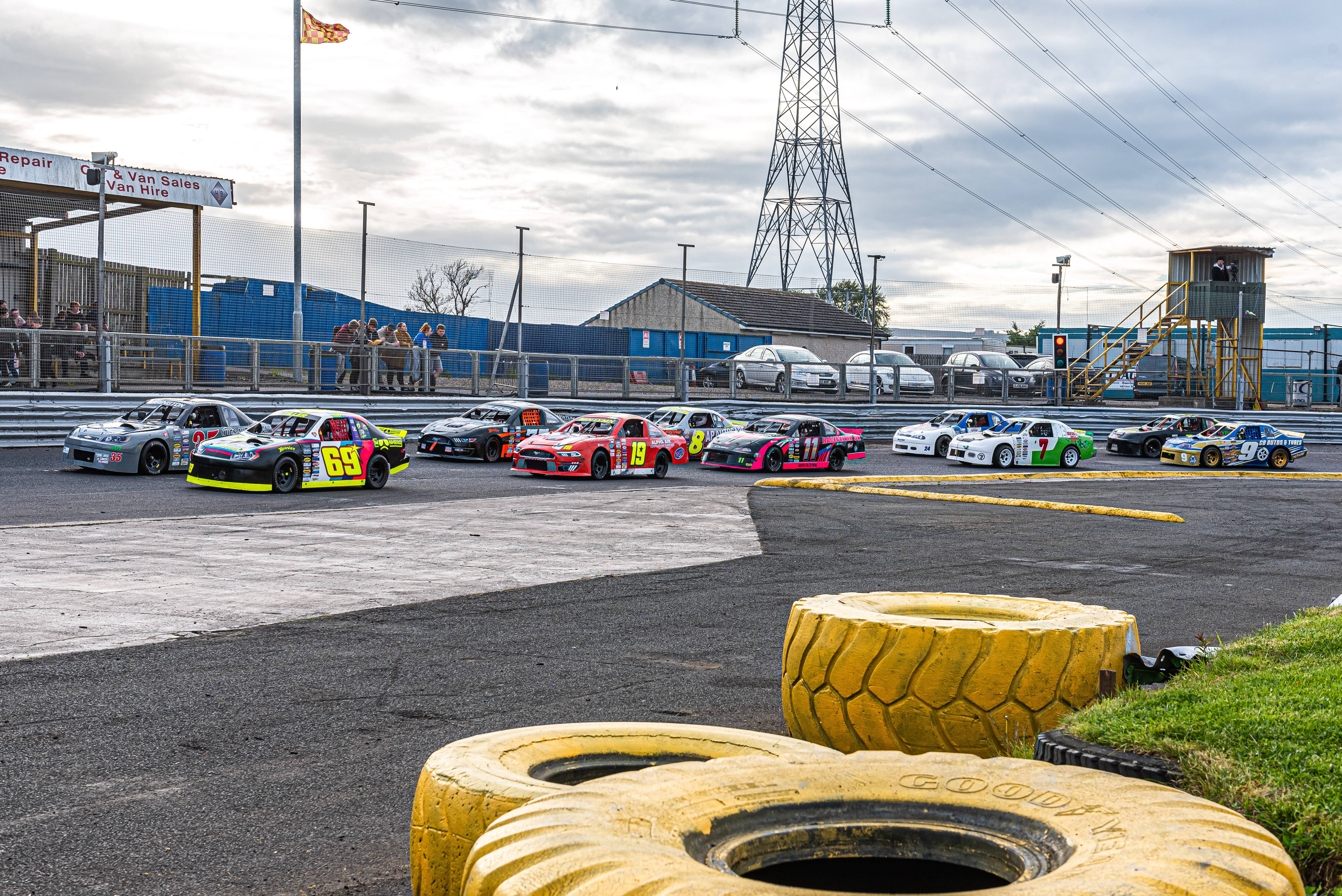 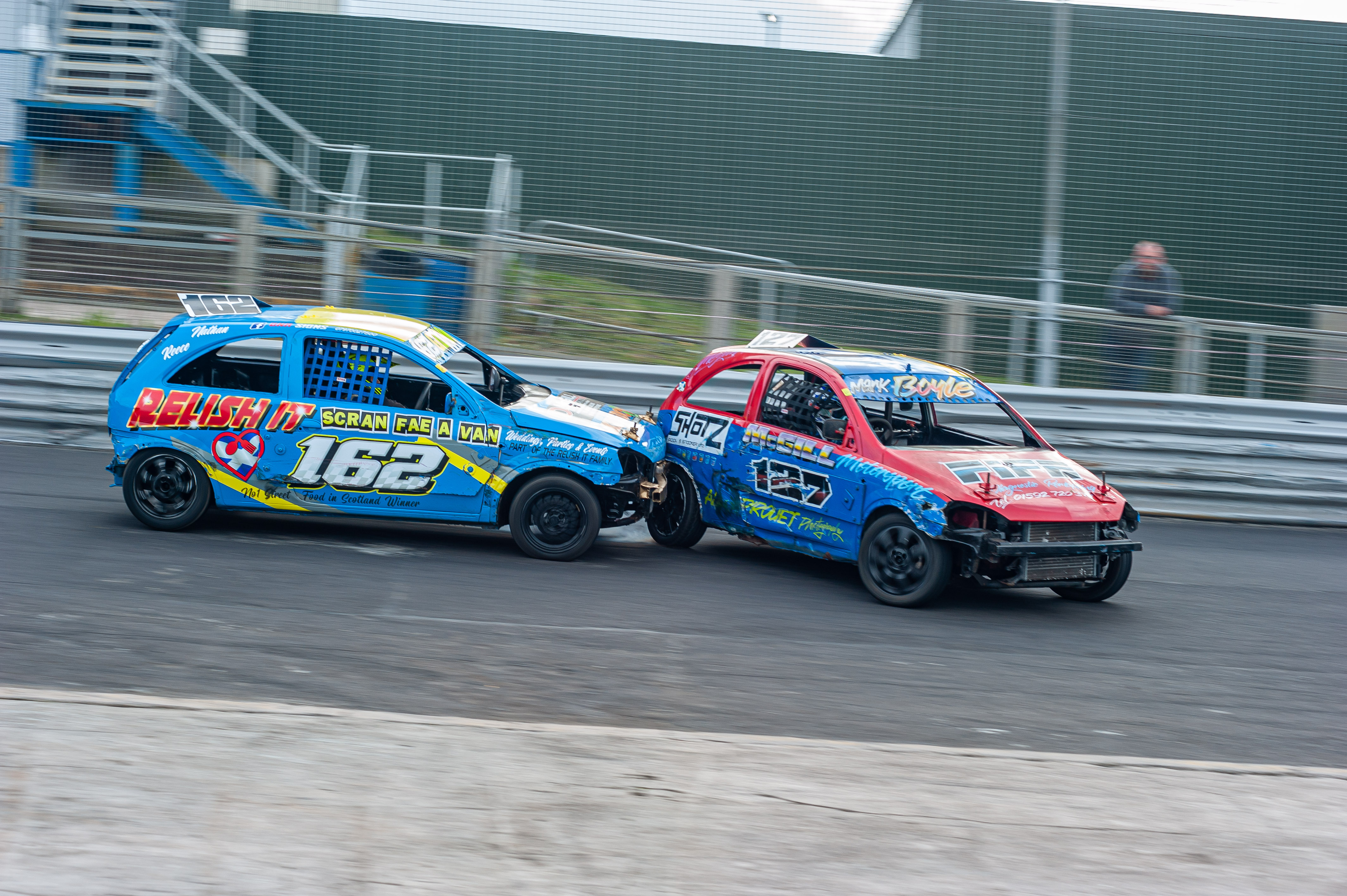 The American Cup Cars made the way to Scotland on Saturday (alongside their Junior equivalent) and provided some great racing. It was the first time since 2016 that the formula had appeared at Lochgelly Raceway, with much of the crowd not having seen the formula previously.

The afternoon started with some ‘pre-meeting’ racing from the Junior American Cup Cars with 2 heats taking place before the main racing started at 5.30pm. Alfie Slater would be the driver to beat on the day in the opening race of the day, after Oscar Dustan put up a good challenge for much of the race, with the two drivers racing very closely for the majority of the race. The second race of the day for the Junior American Cup Cars would see Alfie Slater take the second of his wins, this time in a more comfortable manner, finishing ahead of Lara Spicer and Oscar Dustan. The final race of the day for the Junior American Cup Cars was before the finals got underway as part of the main race meeting, with the Scottish Championship on offer. No sooner was the green flag out, and Alfie Slater was soon up front again and racing away from the pack behind him. Andrew Slater would bring his car home in 2nd place, whilst Layton Malton would complete the top three in the Scottish Championship race.

The Ninja Karts, also had the first of their 4 races take place ahead of the main race meeting starting, which was the whites and yellows race. The whites and yellows event has seen a number of drivers move on into the main three races in recent times, which seen a few karts less than we have seen take to the track. The race as a result, provided a new race winner – Jayden Lee Jeffrey taking his first win in the formula much to the delight of his the driver. Mathew McIntyre and Rayah Burns both look to be picking up confidence in the karts, as they finished in 2nd and 3rd place respectively. The main three races would see Dougie Kidd storm to a scintillating hat-trick of race victories, having avoided a lot of the spinners, whilst setting some brilliant lap times which seen him power through the grid from the back in all three races. Kenzie Bell was presented with his British Championship trophy having been confirmed the race winner. Kenzie provided another solid set of results, but would see himself score a DNF in his first heat, having become entangled with Cameron Mason. Murray Jones and Jenson Fish made the trip from England to be with us, though both drivers were caught up in a few of the races which reflected in each of their results, however, both drivers would still come away smiling having made up ground in each of the races they were caught up in. Jack Jones took a third place in his first heat, with a 2nd place in his second head, whilst Jenson’s best finished would be a fifth place in his second heat. Stuart Shevill Jnr is a driver that is progressing greatly, with him firmly established as one of our red graded drivers. Shevill had a great night on Saturday, and was unlucky not to come away with a win for his efforts, though did finish in 2nd, 3rd and 4th in each of his races on the night. There were some good showings from some of the other drivers on track, notably, Connor Anderson and Blair Innes, both of whom picked up top 5 finishes in one of the races.

The ProStocks were back with us for the first time since late April, and provided some good racing throughout the evening, with a few talking points as well that kept the spectators excited! Graeme Fleming took a double heat win before Darren Rae took the meeting final. Brian Allen didn’t have too much joy as he returned to the track for the first time in 2022, failing to finish the first race, before dropping down the order in the latter 2 races. There was a big impact for Mark Boyle in the opening stages of the meeting final, which seen his car look in a sorry state afterwards. Boyle and Becki Ritchie found themselves side by side as they entered turn one, with Boyle on the outside. Ryan Martin found a gap on the inside of Becki Ritchie and went for it, though Becki then found herself sideways mid corner after contact with Martin. As Ritchie attempted to straighten her car up, the car bit and shot to the left where Boyle was, which forced Boyle hard into the wall bringing out a race stoppage. Later in the same race, Becki herself found herself in the wall having been on the receiving end of a hit from 638 going into turn 3. Ritchie then sped quickly towards the wall on the entrance to turn 4, whilst Rae moved up the inside to then put pressure on Graeme Fleming.

The Stock Rods were out in action for the final time ahead of the British Championship on the 11/12th June weekend, here at Lochgelly Raceway. Shetland based driver Mark Curran took the win in the opening heat of the night, before World Champion Siobhan Martin took a heat and final double. The Stock Rods as always, provided some great bumper to bumper racing throughout the night as the pack tried to negotiate their way around some of the quicker lower graded drivers! Robbie Hamilton put up a brilliant defensive drive in the meeting final as he found himself at the sharp end of the field of cars. Siobhan Martin would break clear of the pack, though Hamilton battled throughout the race to keep the pack at bay – Niall McFerran made the move stick around the outside, before Hamilton was forced into retirement following a hit from John Bremner behind. Hamilton’s retirement opened up the race, and Gary Dean moved up into the top 3 places with McAlpine, Bremner, Sneddon and Crichton all in close proximity.

The sixth, and final formula in action were the 1300 Stock Cars, with just under 25 cars taking to the track in what would be the final meeting that determines the qualification for their British Championship on the 11th and 12th June as well. Though, the 1300 Stock Cars have 1 further meeting before that, as they support the BriSCA Formula One stock cars on Friday 3rd June. Kenneth Scollon made an appearance in the hire car of Kyle Hegg, and was fast from the outset, taking a great win in the opening race, finishing ahead of Kyle Hegg and Brant West. European Champion, Kyle Hegg would go onto take a win in the second heat of the night, with English visitor Joe Giles finishing in an excellent 2nd place, ahead of Craig Haxton. Dean Abercrombie took the win in the meeting final, as he looks to be getting to grips with his car, with Hegg and Ally Strachan completing the top 3 in what was an excellent night of racing for the 1300 Stock Cars!

We are back in action at Lochgelly Raceway this Saturday night (28th May), as we host the 1600 Bangers, CC Rods, Superstox, National Hot Rods and Ninja Karts.