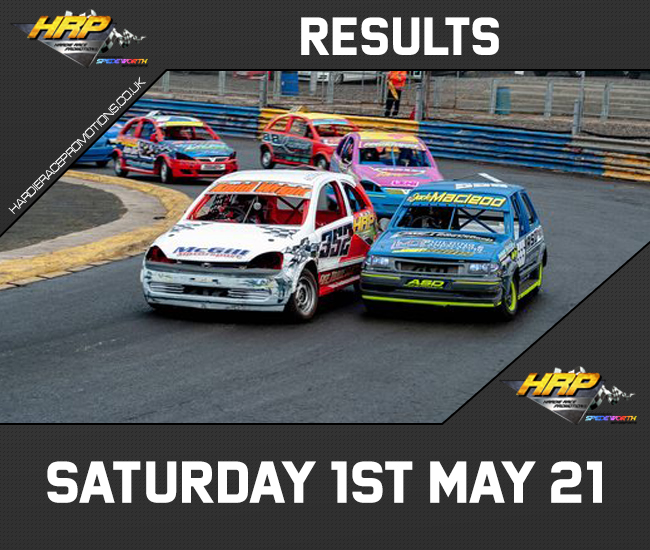 Wow, what a night! Five absolutely FANTASTIC formula put on a superb show in our much-delayed 2021 season opener. It was great to be back, and great to see drivers turn out in their numbers to be part of the event.

The 2.0 Hot Rods, Superstox, Junior Productions, ProStocks and Back 2 Basics Bangers were the chosen formula for the opening drive-in viewing event. Such as was the anticipation for this meeting, our drive-in viewing spaces sold out in less than a week, with many disappointed race fans having to miss out!

The 2.0 Hot Rod class arguably put on one of there best showings at a domestic meeting for quite some time. Car numbers buoyed by a few visiting drivers who were keen to get some racing under their belts. Mitch Souter, Ross Eaton, Alan Thorndyke, James Morris, Jason Jackson and World Champion Dave Leech joined our Scottish contingent of drivers. Just under 20 Hot Rods took to the tight Lochgelly Raceway and provided some fantastic door to door racing throughout the night. Greg Honeyman debuted his stunning new car and was immediately right on the pace with it – roaring to an opening race win! Cameron Willacy, a driver who improved throughout 2020, looks set to continue his improvement as he develops into a prosperous young driver. Willacy brought his car home behind Honeyman in the opening race, before going one better in heat 2 as he took an excellent race win, with Honeyman this time finishing in 2nd place. William Hardie return to racing and didn’t look like he had been away. Hardie took his car to two 3rd place finishes in the heats, before romping away in the meeting final to take the win by almost a full straight, finishing ahead of visiting driver Mitch Souter. Willacy again, finished in the top three places for the third time on the night as he brought his car home in 3rd place. The 2.0 Hot Rods provided no shortage of action throughout the night, with a number of drivers falling foul to the race steward with a number of dockings throughout the evening for contact or for cutting across on their rivals!

The Superstox, alike the Hot Rods, had a number of visiting drivers including Ian Beaumont, Chris Roots, Dan Roots, Nick Roots and Billy Smith! As the green flag dropped in the opening race, the early signs were that a number of quick drivers were on track which would make it tough going for any of the red graded drivers to make inroads into the pack ahead of them. Steven Ballentine showed excellent pace in his second outing with his new car, whilst Mark Dews looked to have the car dialled in exactly as he likes it. Dan Roots seemed the quickest of the visiting contingent throughout the evening as he came away with a decent haul of points. Heat 1 seen Mark Dews take an impressive victory – winning by a fair chunk of track, with Dan Roots finishing 2nd, with National Points Champion Bryan Forrest rounding out the top three. Heat 2 of the night seen Steven Ballentine show his pace as he dominated the race from pretty much start to finish – however, with the chequered flag only a few laps away, Dan Roots seemed to find some extra speed as he closed down the quick moving Ballentine. With the last corner on the horizon, Ballentine negotiated his way around the back marker Ciaran Adams, and Roots seen his opportunity and went for a last lap lunge to try and take the win. Unfortunately though, Roots clipped the inside kerb and hit the side rail of the Ciaran Adams car, which flipped the Adams car over onto its roof and into the barrier, with Roots spinning in the process before quickly recovering having lost a couple of places, before the red and chequered flag came out for the stricken Adams car. The meeting final seen a few cars missing from the grid having suffered some damage in the heats, though there was still enough cars for an excellent race. Steven Ballentine led the way in the early stages before being overcome by Mark Dews and Bryan Forrest with only a handful of laps remaining. Mark Dews, who looked set for victory, approached the back marker Billy Smith on the last lap of the race, and with Smith refusing to budge, this allowed Forrest to make his move on the last corner and snatch the win away from Dews who subsequently gave Smith a fair push after the flag, with Ballentine rounding out the top 3.

The Junior Productions class took another step in the right direction, with 20 cars taking to the track in the opening meeting of the season – with several more still to come out! Heat 1 of the night seen former National Points champion Koddi Wright storm to victory coming from the back of the grid, finishing ahead of Chelsey Rainey and Jensen Bell. Heat 2 of the night seen newcomer Cole Ford get away well, before spinning out and being collected by the oncoming Lewis Dickson and Samantha Rogerson resulting in a yellow flag stoppage for the youngsters. Thankfully, all drivers were able to walk away before returning to the track in the following race. Jack Morrow took the race win, finishing on track ahead of Chelsey Rainey, though the latter was docked a couple of places for a jump start. Jase Wall inherited the runner up spot, with Bell being elevated to third place as a result. Koddi Wright and Jack Morrow looked to have an excellent race, before the pair clashed which seen Wright spinning out of contention with Morrow continuing on his way. The meeting final for the youngsters seen the kids line up, within their grade, in points order from the heats in a trial. It was Morrow and Wright who had the eyes of the stewards on them, as both cars came near each other again in the closing stages of the race. Wright caught up with Morrow as they battled for the lead of the race and gave him a push out of the way to come up the inside, with Morrow returning the hit a corner or so later though was unable to regain his position – Both drivers were issued with the black cross board, with both docked for their actions which gave Jensen Bell the win as a result, with Jase Wall up into 2nd, ahead of the demoted Wright and Morrow.

The Back 2 Basics Bangers provided some excellent racing throughout the night – with the first 2 heats meant to be nudge and spin only, which most drivers abided to throughout. A few debutants in the shape of Garry Roberts and Grant Watson were in amongst the action – with both going home with cars a little worse for wear! 3 races seen 3 different winners, with Darren Linton taking the opening race, with Jamie Sangster taking heat 2 and William Donnell taking the meeting final, before Chris Herron won the DD!

We are back in action this Saturday night at Lochgelly Raceway with a SIX formula line up!! First race 4.45! Tickets for drive-in viewing are onsale via our website.